It seems like forever since I’ve played a roguelike platformer. A few years back, they arrived more frequently but that drought has now been broken. Chenso Club is a fast-paced, 2D platformer that combines forgivable platform challengers with some simple but swift combat. Swedish developer Pixadome are at the helm. 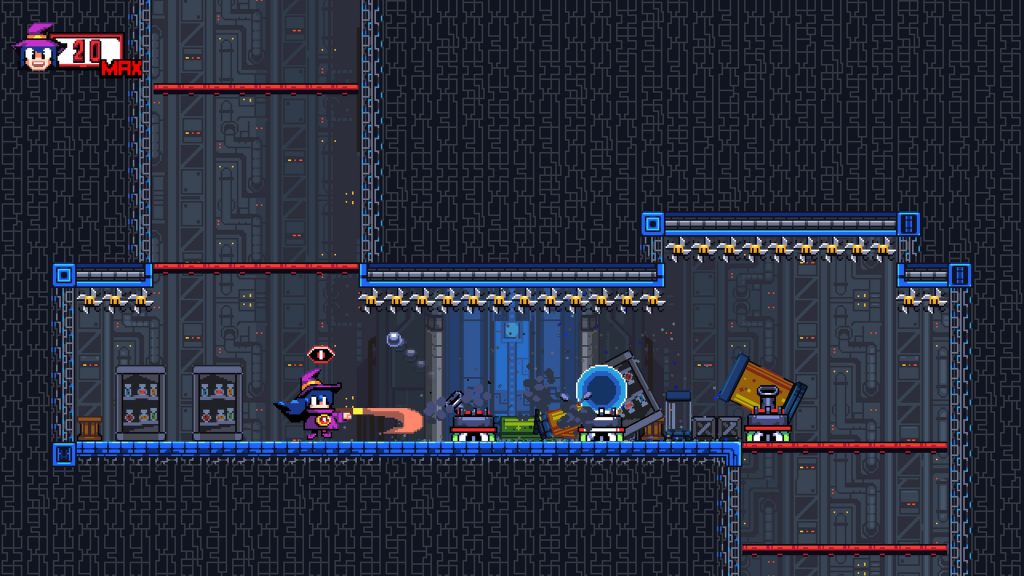 A run in Chenso Club has a great structure to it. Each platforming challenge is a single screen and usually a handful of these screens make up a phase of the level. At the end of the first phase, a bonus stage appears which is usually an opportunity to win some free upgrades. The second phase culminates in a boss fight. There’s a nice, dependable nature to it. There’s a solid idea of how long a stage will be which does allow players to put in that little bit of planning. The rigidity can take away some of the mystery but the layout of each screen is randomly generated.

Each level does come with its own set of unique enemies but additional characters show up fairly regularly to add a stipulation to complicate combat. The talking clock gives you a timed challenge where killing enemies will replenish seconds. There’s another one who tasks you with navigating stages in the dark. For as rigid as the game can be, these little variables throw some surprises that are welcomed. 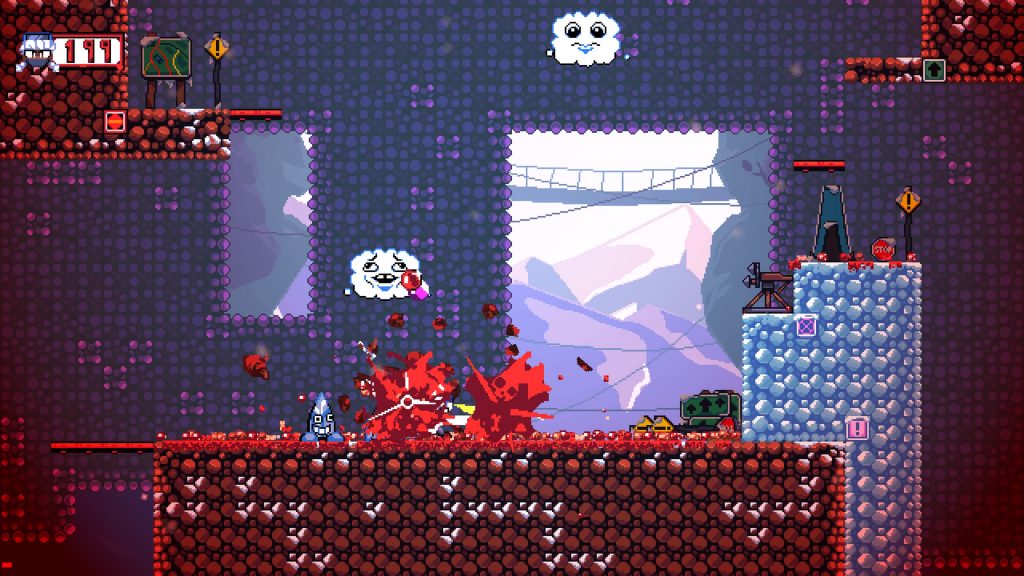 Combat in Chenso Club is pretty straight-forward. Your chosen fighter can strike enemies to defeat them. There’s a jump that allows you to reach platforms and a dash can be used for extra distance or height. Each character has their own favoured weaponry. Carmine has a heavy hitting hammer whilst Alice handles a pair of ice picks. She has a much shorter range but I find she’s great at maintaining a combo. On her feet, she’s a little slippy which can make tight platforming sections a pain. These trade-offs are interesting and you can consider their stats before starting a run. There’s only five to choose from but they do offer something different.

Heavy weaponry can feel a lot less instant and I do find I use dashes to compensate for a jump arc that doesn’t quite have the range I’d like. Stacking these upgrades gave me opportunities to evade pits or cross larger gaps. Whilst I could never count on that being part of my build, I did always seek that extra mobility out. There is something satisfying about barrelling into a mob of enemies and slashing them out of existence. Taking damage doesn’t feel punishing as lost health always has a chance to be recovered. 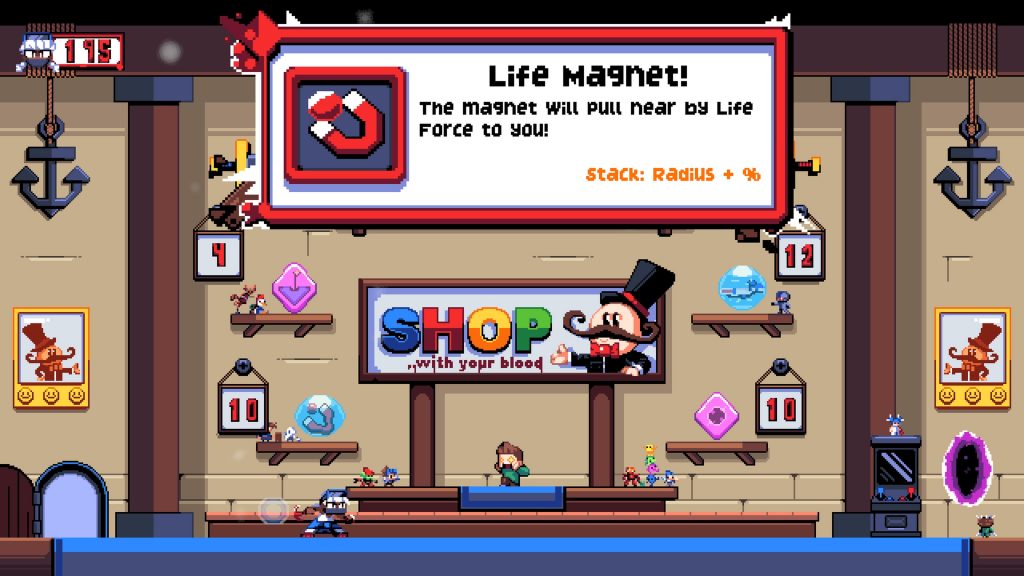 Enemies drop health when defeated so a busy room won’t always inspire dread. I did find myself trading hits knowing I would probably gain it back in a good encounter. There’s hazards to consider, especially in boss encounters but, in terms of difficulty, there’s four options to pick. Story difficulty is the most lenient and it does seem like each one tweaks damage numbers and generously plays with your starting health. By default, you have a few hits to play with but the combat has a lovely sense of risk and reward. Even with this push and pull, I don’t find Chenso Club frustrating. There’s plenty of room for error.

The relationship between health and upgrades is interesting. Whenever a shop is visited, you pay with your available health. When I wasn’t feeling confident on a run, I much preferred having the life on hand to get me through the next few rooms. This is a great way to add consequence to a run. Chenso Club is full of little decisions but shopping feels like the most impactful to your success. 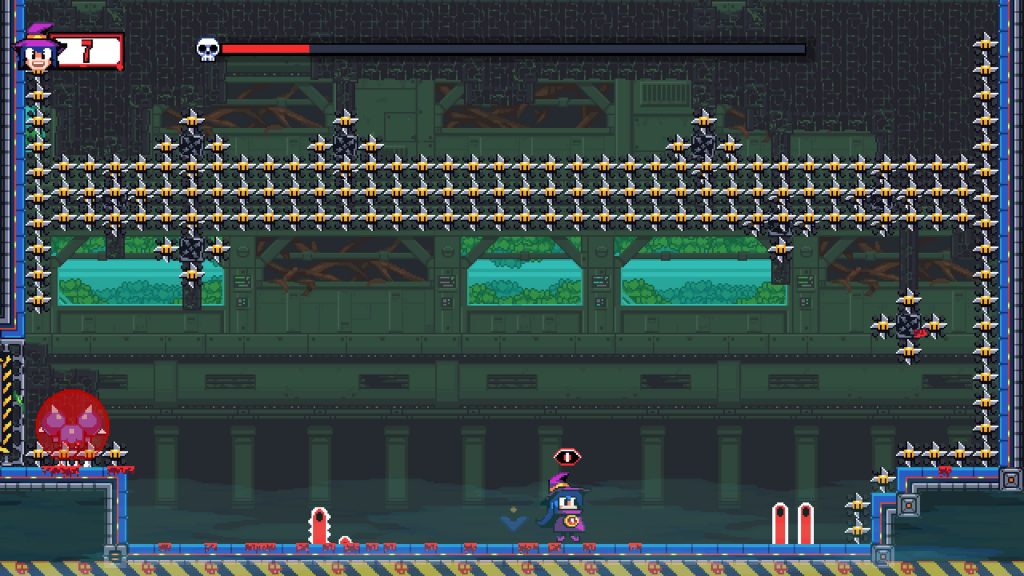 Presentation is pretty good. Comic strips handle any cutscenes and they do give the cast plenty of character. It’s nicely animated and they pack plenty in what is ostensibly a screen or two of text. Enemy design is varied and very cartoony. The 16-bit aesthetic allows for some chunky pixel art and plenty of gibbage. At times, there’s a chaotic look to it but platforms and foes are easily distinguished. The soundtrack really shines, in my opinion. There’s a definite Sega influence but it feels very much an homage with its own catchy tunes. It feels cohesive and, surprisingly, gives Chenso Club it’s own look and feel.

When it comes down to it, Chenso Club has a really good flow. Stages are short and the single-screen nature of it doesn’t lend itself to much downtime. You’re never too far away from a bonus stage, boss or shop and there’s a quickness to the combat that makes battling fodder feel fun. The duality of health and money does give players a decision to make in a game that is otherwise all action and the presentation feels wonderfully reminiscent of a 16-bit heyday. As a package, Chenso Club is a game worth seeking out.

Chenso Club
7 Overall
Pros
+ Fast paced combat.
+ Forgiving platforming.
+ Plenty of little decisions to make during runs.
+ A charming and lively presentation.
Cons
- Jumping can lack precision, regardless of the character you control.
- Some timed challenges feel trivial.
- Some of the environments look relatively plain.
- Can be over fairly quickly.
Summary
Chenso Club is a game that feels very much the sum of its parts. Whilst 2D platformers with roguelike elements are absolutely nothing new, the presentation does elevate it into a place of its own. Combat is fast, fluid and simple and the platforming is largely forgiving. The flow of a run means you're always close to gaining new gear and using your own health to shop does deliver some tough decisions for players to make. It all comes together to make something enjoyable.