Rush Rover is a top-down, twin-stick shoot ’em up from Radio, the studio of one-man developer Chengjin Wu.  The coding, graphics and music were all done by him via Game Maker Studio.  This might make it all sound a little bit unexciting, especially as we’re awash with twin-stick shooters on PSN, but actually this one surprised us.

You play as the Rover unit and you run around a randomly-generated map, shooting enemies and picking up upgrades.  You move in eight directions with the left stick and shoot/aim with the right.   Enemies drop different types of currency.  These aren’t named but the first of these is a sort of basic cash that can be spent on upgrading your primary weapon.  This weapon itself can be switched out from its initial machine gun to whatever you can find in the game.  There are lasers, rocket launchers, pulse wave things, spinning blades.  The variety is pretty good but, as with any roguelike game, you’re relying on finding the good weapons in that particular run through. 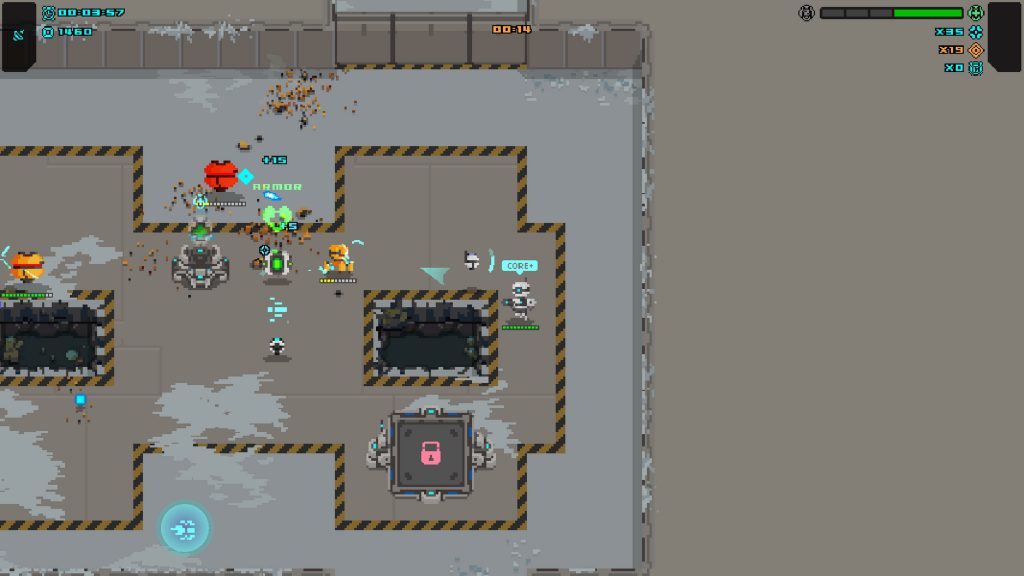 You also have a drone that follows you around.  This too has a weapon that can be replaced and upgraded, adding another element to what is a good upgrade system.  You also have secondary attacks, extra slots for drones and additional skills and just a whole lot of stuff you can improve.  In some ways it reminds us of the incredible Risk of Rain (albeit without the stacking upgrades) in that the main enjoyment of the game is in the way you power up your player.

However, there are a lot of things that aren’t very well explained in a game.  There are cores, ammo slots, skill slots, plugins that aren’t really explained at all.   Having played the game for a while, we’re still not sure of all of it.  The whole thing is either a bit unnecessarily complex or just not explained well but either way it does take a bit of the shine off of thing.  And the other problem, which is very common among games like this, is that when you finally run out of energy and die, you have to go back to the start.  It’s fine for a while, especially as the game is pretty addictive, but eventually it gets a little bit tiresome having to start from scratch every time. 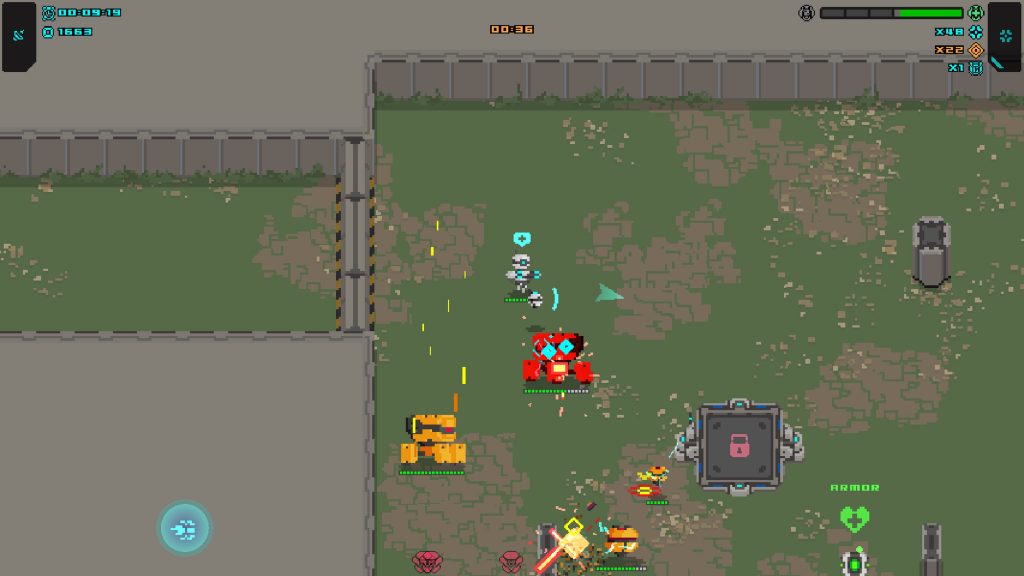 This would be less of a problem if there was something to aim for but as a Ratalaika game you do end up getting the platinum trophy very quickly as so it all feels aimless pretty quickly.  It was all within one play session that we felt like we’d seen everything the game had to offer and so now we’re only playing it to see if we can figure out some of these extra gameplay elements or to see if we can tip the upgrade system far enough to become all powerful.

But the gameplay is enjoyable while it lasts.  We had a good session on it and were thoroughly enjoying it until it ran out of steam.  The game’s presentation is good in the same sort of understated way.  Yes, it’s another pixel-art effort with a chiptune soundtrack but stylistically it all works, again kind of like how Risk of Rain‘s visuals didn’t offend and helped convey the action.  It’s got a similar look too, dystopian sci-fi.  Nothing impressive as such but it works. 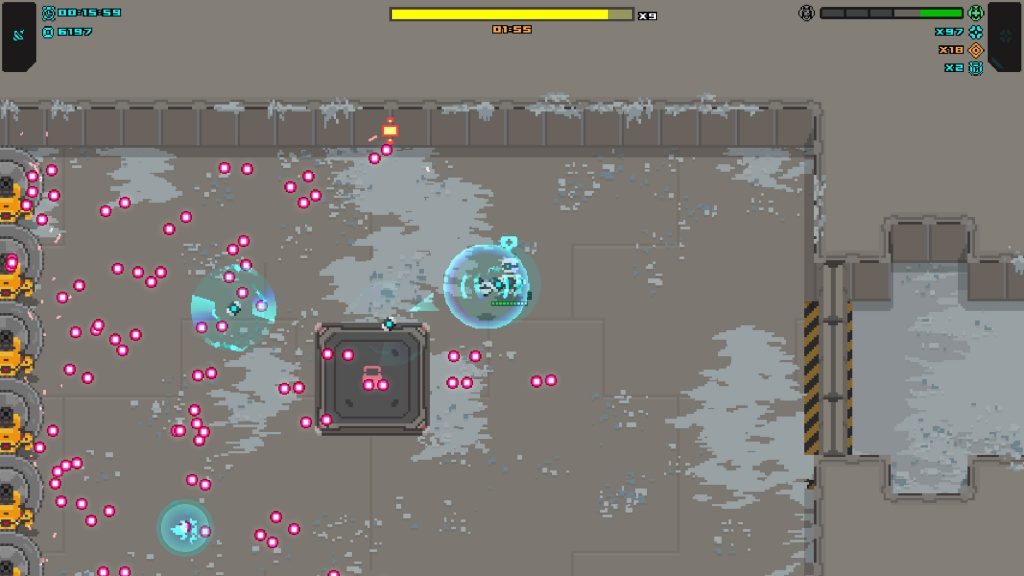 A common theme with a lot of indie games we’ve reviewed recently is that they’ve been good but we feel like a fleshed-out sequel would be great and that’s kind of the thing here.   But for £3.99 and with Ratalaika’s mandatory PS Vita cross-buy functionality, this is an inexpensive way to fill an evening and a fun one too.  Rush Rover is definitely a smarter game than it may first appear and we can see this one surviving our usual post-review cull for a while whilst we try to get a bit further into it with each go.

Rush Rover
7 Overall
Pros
+ Really good upgrading system
+ Good playability
+ Cheap and has cross-buy
+ Presentation is fine
Cons
- Is a bit confusing at times
- Having to start from the beginning gets frustrating
- Trophies are too easy
Summary
Rush Rover is a classy, well-considered twin-stick shooter with some good upgrading elements. It's short-lived and lacks clarity at times but is a cheap and fun way to fill an evening, if nothing more.