Ratalaika are back and after last month’s Syrup and the Ultimate Sweet they’ve ported another visual novel in the form of Blind Men. Ian quite liked that one so have they sourced another decent one or will this just be for those looking for a simple PS4 and Vita platinum? 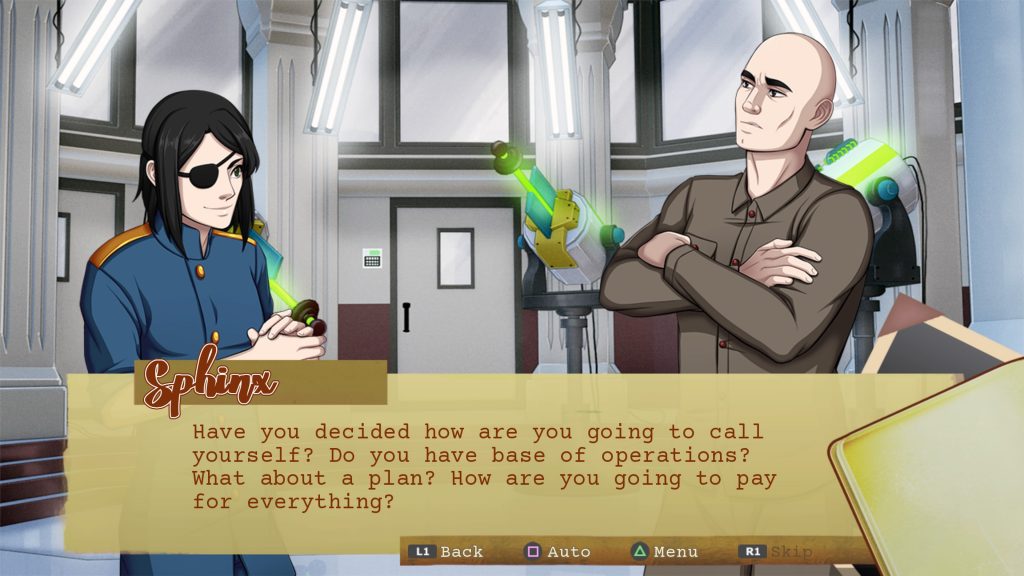 You play as Keegan, aka Dr Cyclops, who after losing his parents in a car crash (and the use of one of his eyes, hence the alias) has been raised by his uncle. His uncle is a renowned super villian and Keegan has decided he wishes to follow in his footsteps. To do so he’ll need to join the League of Evil but has to apply and prove himself worthy to be accepted. This is where we join him, choosing one of two crimes to try and commit.

Being a visual novel obviously you don’t have too much input. There are about six to eight choices to make in each playthrough, depending on which options you choose and a full playthrough will take about forty minutes-ish. Once you’ve seen a certain choice play out you can skip through it at quite a rate, or in the options you can change it so you can skip everything. Good for getting the second platinum, though the PS4 skips through the dialogue much, much faster than the Vita does with a full run on the home console taking less than a minute when speeding through it. 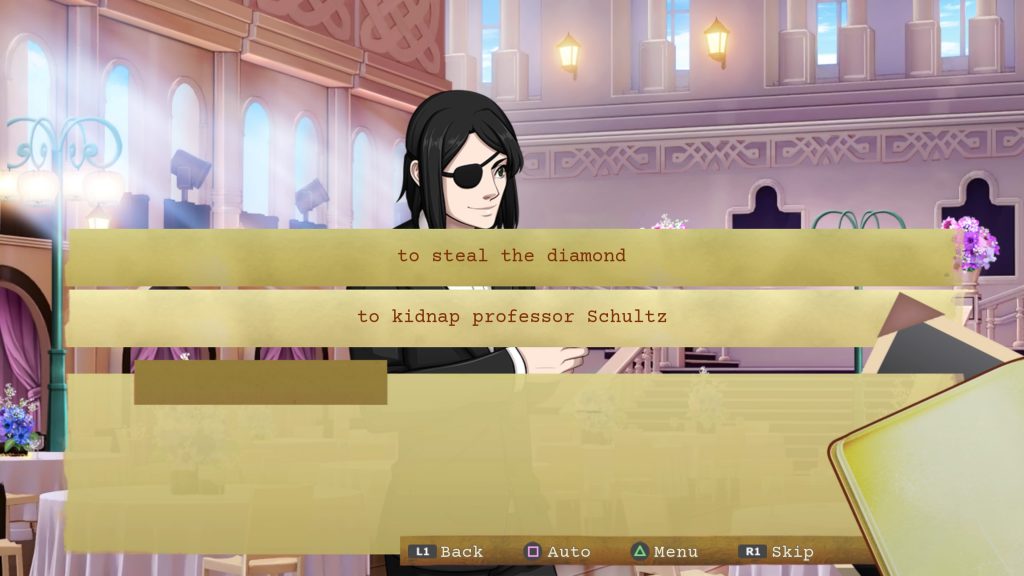 There are basically eight endings you’re aiming for with your choices, as not only are there two crimes to choose between but two love interests/antagonists. These are your main interactions throughout the game and take the form of an American government agent who’s an overly flirty James Bond type and a Russian agent who is far more serious.

The game does an alright job of introducing them but the short runtime doesn’t really allow for much of a relationship to grow, just if you chose the right options then there might be some kissing or there might not be. Obviously there is the underlying story of the crime and applying to the League of Evil but this is very much a ‘boys’ love’ game, a romance visual novel featuring two males. 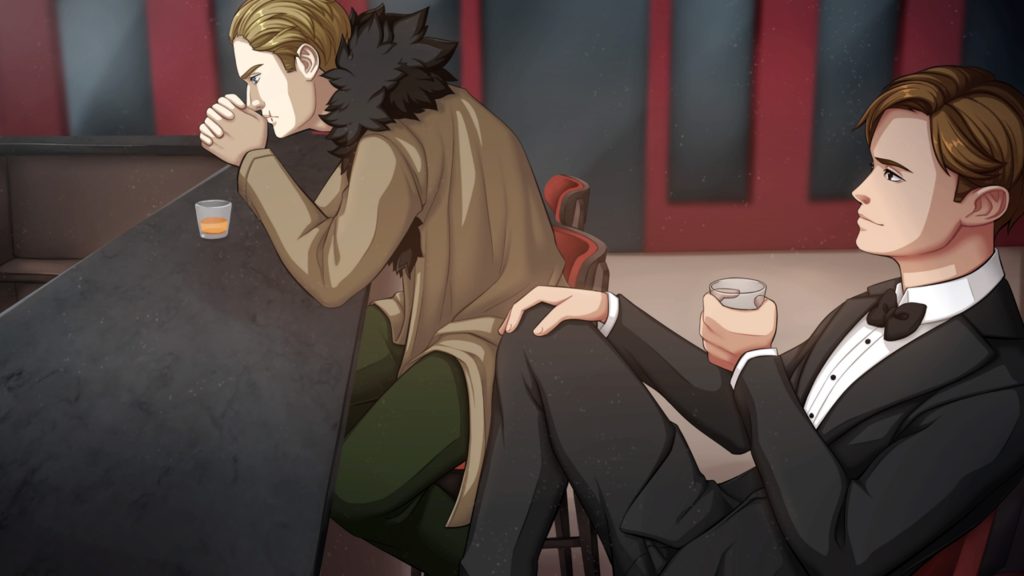 I’m not into visual novels (Danganronpa being the exception) and a romance one, gay or otherwise, will always struggle to hold my interest. Since Blind Men seems to come from a Spanish speaking studio (there is a tiny, tiny amount of spoken dialogue but it’s all in Spanish and the two written language options are English and Spanish) the writing is actually well translated. There are spelling mistakes or grammatical errors on almost every page but everything makes sense which isn’t always the case with translated dialogue.

The artwork is decent. Nothing incredible and there isn’t much variety with the amount of unique pieces of art barely reaching double figures but it’s not amateurish or poorly drawn, even if I’m not a massive fan of the style, which can be a thing with these cheaper efforts.

And of course you get two platinums if you own a PS4 and Vita. If you know which options to pick and read everything you’re looking at a handful of hours to see it all (assuming you skip what you’ve already read and remember what you’ve chosen, the game doesn’t keep track of that stuff). If you change the options and skip absolutely everything then you’ll be done in minutes, if that’s all you’re here for. 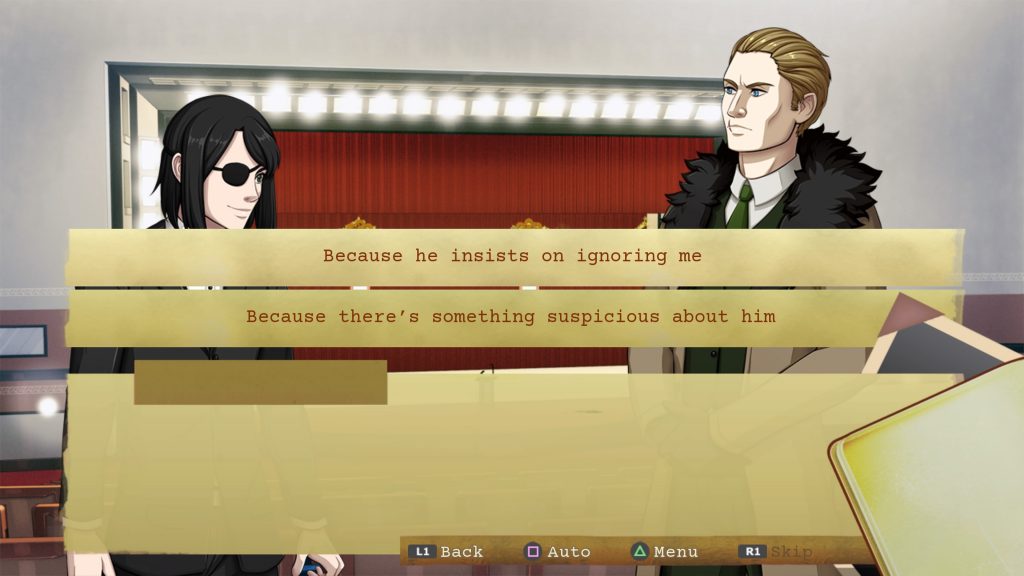 For the price Blind Men is okay. It’s not particularly engrossing and it won’t last you very long but it’s fine. As it’s not my thing the short run time was a blessing but others might prefer more meat on the story, more choices, simply more. Trophy whores will get what they want out it and will be ready for whatever Ratalaika have got their hands on for next week.

Blind Men
5 Overall
Pros
+ Two platinums. Yay!
+ Multiple endings to play for
+ Decent translation and art
Cons
- Not much depth to any of the paths
- Minimal choices
- Plenty of spelling and grammatical errors
Summary
Blind Men is a short, easy platinum (or two) in the form of a boys' love visual novel. Being short it's not too deep or engrossing but for the price it'll probably satisfy those interested in the content or the trophies.