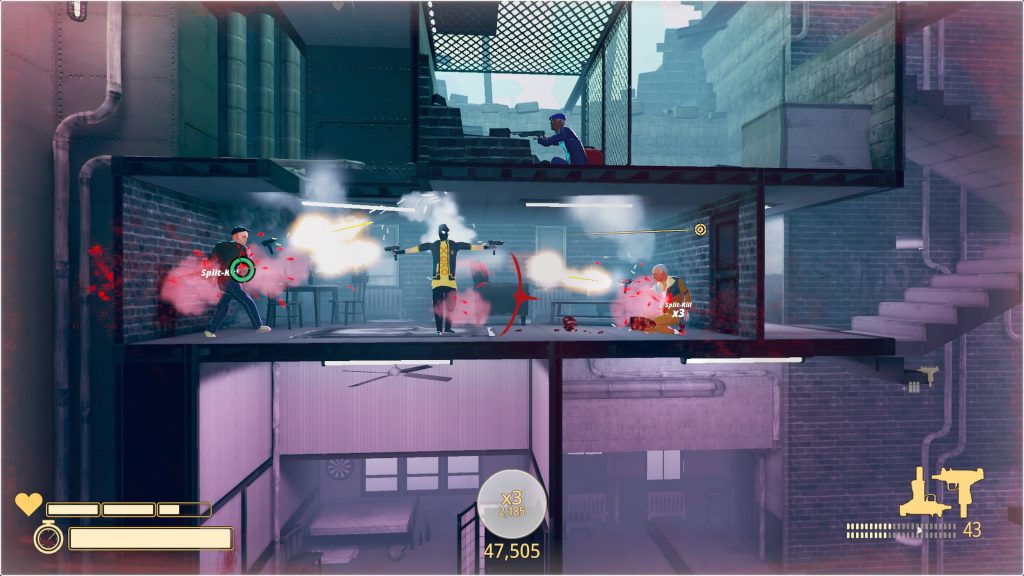 If you were on twitter a couple of years ago, watching out for interesting Indie development stories then you may have come across My Friend Pedro. Littering the internet echo chamber was a bunch of Gifs that depicted a masked killer performing some slick moves, flipping through the air while pirouetting and dispatching non-descript goons with utmost finesse while on the back of a skateboard. There was a lot to love in these little snippets of action and it looked like the kind of game you would always imagine but would never see due to the constraints of development or a lack of mass market appeal.

That last sentence pretty much sums up most of the work from the Devolver Digital publishing outfit. For the few that may not be aware, they are known for the risky; championing games that would otherwise suffer the fate of obscurity, such as PSC favourites OlliOlli, Hotline Miami and Downwell. My Friend Pedro by DeadToast Entertainment fits in beautifully within the stable, providing a short blast of fun that isn’t concerned with the likes on anti-violent censoring or having a plot that makes sense. It’s just good, unfiltered fun with few limiting factors and that is all you should need. 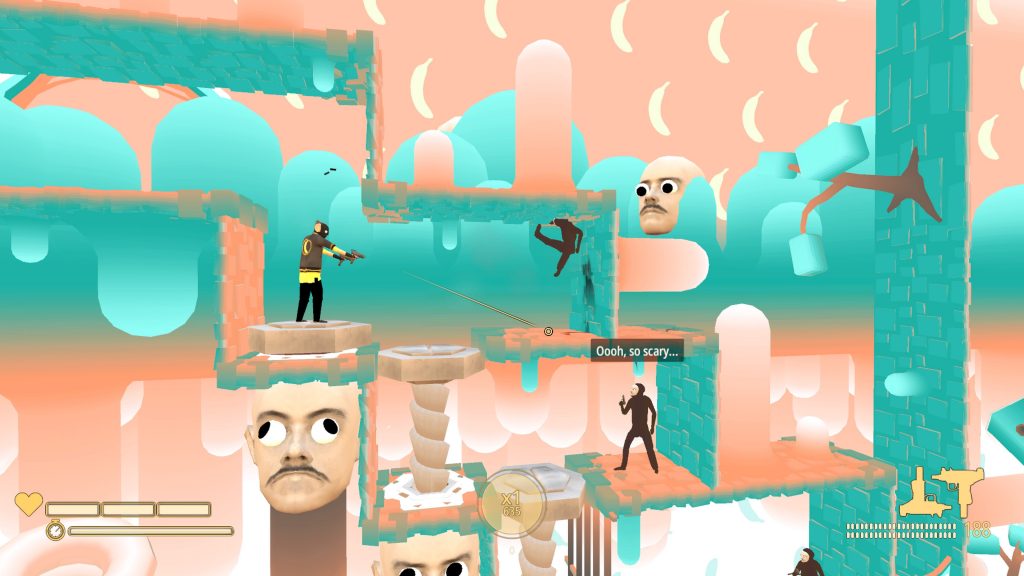 While not what you come for, the story is short and sweet. You play as a nameless, faceless protagonist who is awoken by a sentient talking banana known as Pedro. This herbaceous plantain guides you through the various interconnecting 2.5D areas that ultimately lead the player to the next corridor of goons that want to ruin your day. There is an ultimate goal here, but as a rule the only thing as a player you will be concerned with is how fast or how stylishly you can get through each zone while keeping a head on your own shoulders. It certainly isn’t some sort of Shakespearean epic, so don’t immediately drop tools and buy this if you want your brain to be entertained with branching dialogue trees or moral decisions. This game is about killing as many enemies as you can in the most stylish ways and thankfully, this is where the game excels.

My Friend Pedro gives you all the tools you need to be able to style on opponents; an arsenal of weaponry from dual pistols to an assault rifle with grenade launcher, a slow-motion bullet time ability that allows you to get an advantageous drop on goons and an aiming mode that allows you aim in two different directions with ease as you bounce around each stage evading fire. Speaking of evasion, you can also tap the L1 button to perform a pirouette that allows you to dodge incoming fire, giving ample time for a reload at the same time or a barrelling firing mode that is inaccurate but damn fun to look at while providing a slightly safer way to return fire. 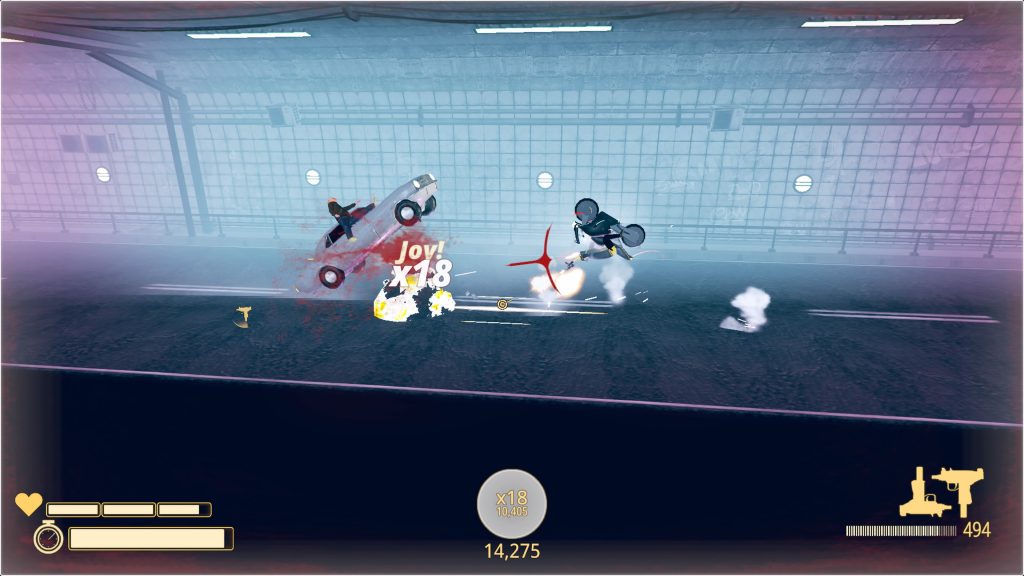 All of this is good and with a small bit of practise, I was able to combine the abilities into killstreaks in no time. DeadToast Entertainment could have done more with the weapons, abilities and whatnot, but what I find excellent about this approach is how there is a lot to work with but not too much so that any one ability goes to waste. Indeed, by the ending of My Friend Pedro you will have practised everything enough to show a degree of mastery that results in rooms of enemies being cleared in a hale of bullets and style that would make Keanu Reeves blush.

Further synergy with your abilities comes with the environments that you are ordered to plough through. Each level has some sort of gimmick or interactable that is designed to make your life easier or add further finesse to your actions. As an example, a frying pan can be kicked at enemies for a humorous kill, or be launched and kept mid-air with gunfire, sending bullets flying in all directions. Other interactables include barrels that can be dropped on heads or ridden, basketballs, body parts and even a skateboard that offers a speedy way to get through some sections while accentuating the bizarre and over-the-top action. 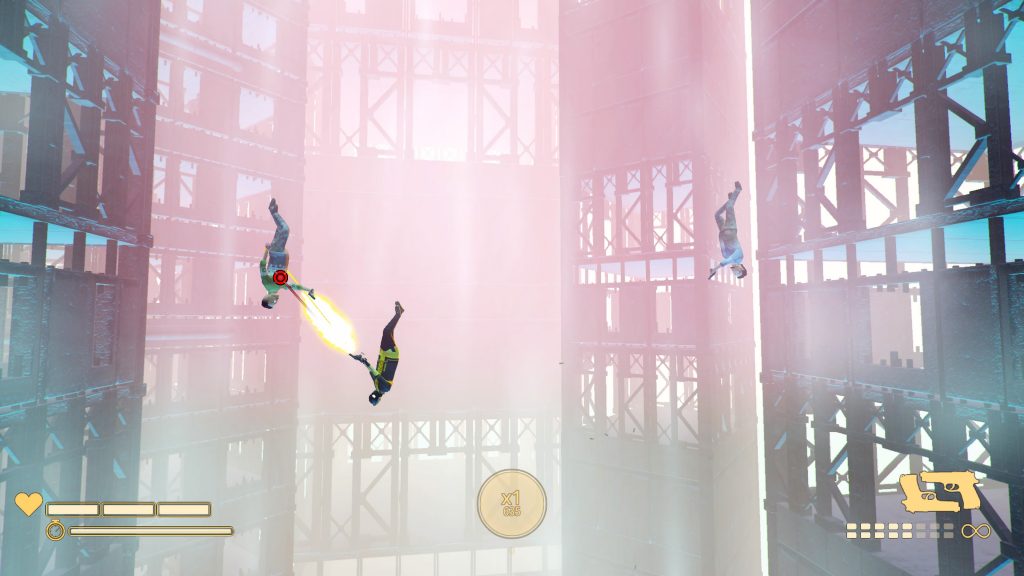 While killing is a big part of the game, there are some other obstacles and hazards to be mindful of. My Friend Pedro keeps things continually fresh by peppering new challenges along the way gradually, all in a bid to ensure that things don’t stagnate by being a one trick pony. Some levels see you tackling laser grids that activate sentry turrets if you are not careful. Others see you navigating mazes of levers that can be activated by shooting if on the correct side or with a button press. This inclusion adds enough to succeed, keeping things fun and engaging. My favourite addition unfortunately only available in one level, this was a spinning top hat that allowed the nameless killer to fly around briefly, making for some chaotic and silly moments.

The action is pretty much what you come for with a game like My Friend Pedro, just about everything else plays second fiddle, with things such as the variety of enemies being serviceable, the environments amounting to little more than corridors and the music being comprised of thudding bass and some choice techno-enthused tracks. Normally, this would all potentially be a detractor, but for this game it feels like somewhat of a bonus. None of it tries to overtake what the core game is about and with the game being as fun as this, none of it really matters. My Friend Pedro Is great fun and something you should definitely try if you fancy some ridiculous shooting action.

My Friend Pedro
8 Overall
Pros
+ Supremely stylish, encouraging finesse and speed once earned
+ Keeps things fresh throughout with new ideas and obstacles in each level
+ Short and sweet, doesn’t outstay its welcome which makes for replayability

Summary
My Friend Pedro is every bit as fun to play as it looks. The game exudes finesse, rewarding players for risky manoeuvres, experimentation and styling on the multiple opponents you encounter. While some may bemoan the short five-hour campaign, others will find immense replay-ability thanks to high score mechanics and speedrunning sensibilities. Whichever side of the fence you sit, the game is fun and one that is designed to make you feel like a badass. What's not to like about that?

One thought on “My Friend Pedro – PS4 Review”