The strategy RPG is a genre that is pretty much being kept alive by indies these days. Nintendo have their Fire Emblem series but that is very much an outlier, then there is Disgaea which is its own weird thing, the other big hitters of the past have vanished from modern day. I was a fan of the Shining Force series with their large scale armies and battles with a variety of units. Reverie Knights Tactics is not that, the battles and your army are far smaller but the mechanics will be familiar to anyone who has dabbled in the genre before. 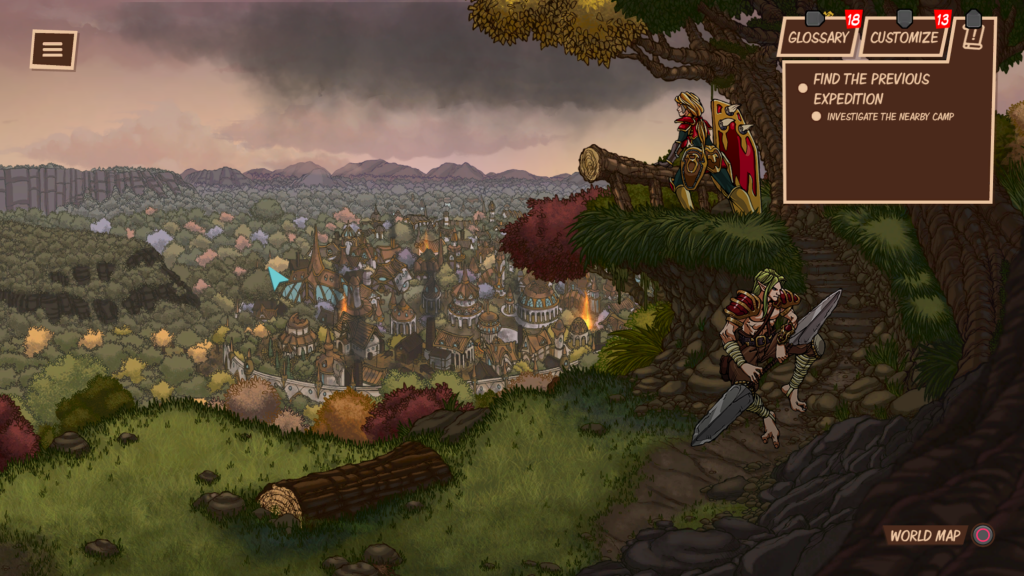 The protagonist is called Aurora, a scholar who is going on an expedition to a feral continent in search of another team who has gone missing. Although she departs on her own, her friend Brigandine the knight stows away with her and before long she’s got a four person party. This is fortuitous as there are lots of battles between her and her goal.

Battles take place on a grid with each character, friendly or otherwise able to move a certain distance. As with the modern XCOM titles you have two action points which can be used to move and attack, move further, or you can use stronger versions of moves if you don’t move at all. You have a basic attack that you can use to backstab if positioned correctly or if you have multiple characters within range then they can use a team attack. There’s also special abilities which require mana to perform which can range from attacks to buffs and healing spells.

As the strategy part of the genre implies you need to think and use positioning to succeed as you’ll generally be outnumbered or facing far more powerful foes, or both. Prioritising enemies and protecting the weaker units whilst using each character’s talents is the key to success. There is a minor stealth element at times where enemies aren’t aware of you until you move into range but this will only last a couple of turns before every enemy just becomes aware. 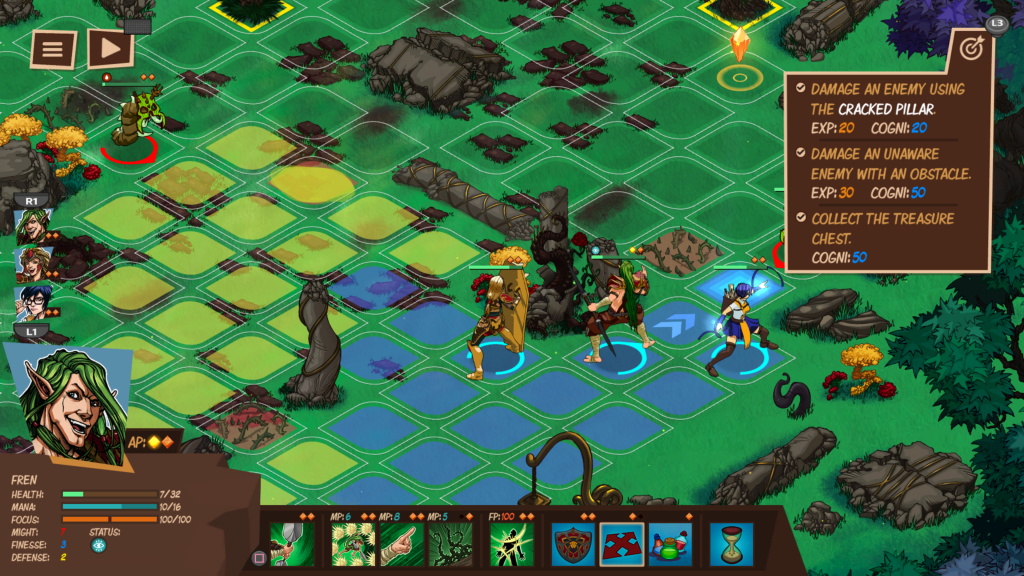 The first fight is quite a poor tutorial level which lets you play but is a forced loss, bafflingly, but it does give you a good idea of how the maps will be laid out. As the maps are smaller you won’t be encountering huge numbers of enemies but, unfortunately, a lot of the maps play out the same. You’ll spawn at the bottom of the map, with enemies to your left, right and ahead. Then, assuming they’re aware of you, they’ll all just converge on you. There are environmental hazards that you can use to damage or stun the enemy but levels tend to feel very similar very quickly. Certain set piece battles will have their own gimmicks but there are a lot of the smaller, samey battles between these which gets a bit tedious almost instantly.

There is an effort to add variety by giving you optional objectives to complete in a level. These will give you more experience and ‘Cogni’ which is used to buy accessories. These objectives might require a certain character to survive or defeating two enemies with one attack, for example. They can be quite tough to juggle whilst also just trying to complete the level but you can restart a battle from the pause menu or they even offer you the option at the end of the battle. If you progress then you can’t replay it however. 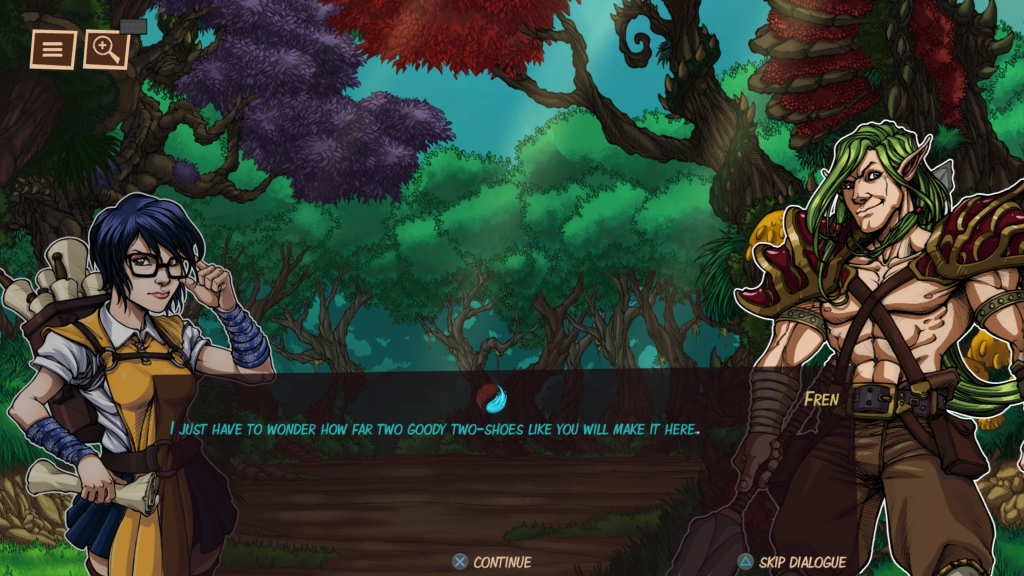 This does make you approach the level slightly differently but every time I’d enter a level and a couple of enemies would appear to the left, to the right and at the end of the map I’d die a little inside. Combine that with the AI just rushing you and the levels don’t feel anywhere near different enough. You can speed up the battles slightly with a tap of the touchpad but this should be the default speed, the normal speed is just far too slow and plodding.

It’s not helped by the ‘glance’ mechanic. This is a chance to do minimal damage, supposedly based on your finesse, which will randomly occur. It makes planning things out tactically far more difficult and the amount of times enemies end up on 1HP feels contrived. You can get a random glance chance on yourself, which is nice, or you can block to guarantee it but when you pop a powerful spell using your limited mana only to do almost no damage based on chance it just irritates. 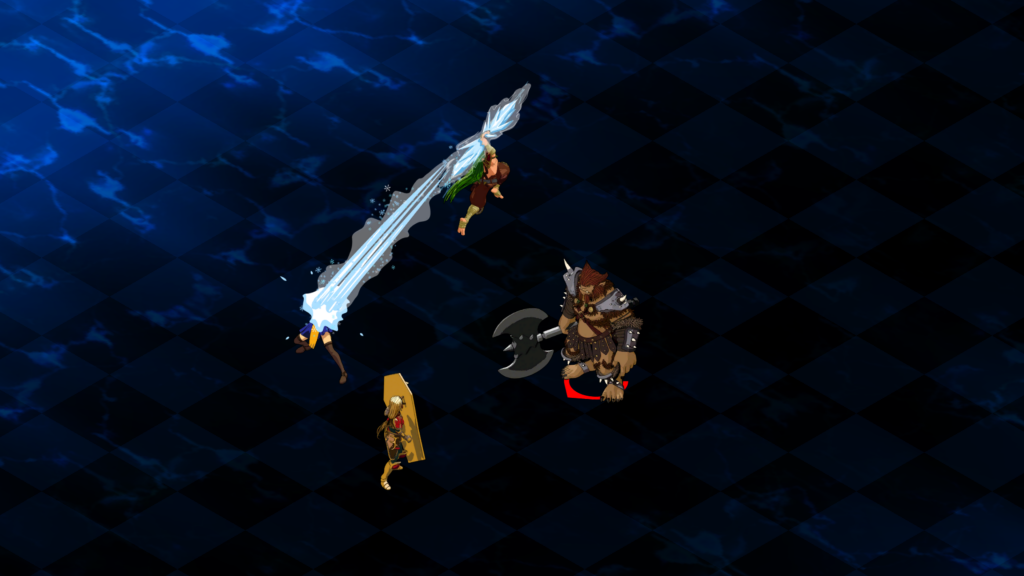 Upon level up you can put a point into a stat: the aforementioned Finesse which increases magic attacks and critical hit chance/defence, Might which improves your physical attack and Defence which, as you’d expect, means you take less damage. Every few level ups you get to choose a new move from two options, though you can only ever take three into battle so it’s not like your move pool is expanding, you’re just getting more options to potentially take into battle. Everyone also has a super move which can be used once your Focus meter, accrued passively during a battle, reaches a certain point. You can use it at half or full to deal damage over a wide area.

You can select points on a map outside of battles, choosing a direction to go in a dungeon or going back to camp to spend your cogni and crafting healing items out of materials you get from battles. Depending on which difficulty you pick you can either recover fully after each battle or you’ll need to use items to do so, although you also get max health and mana when that character levels up which is nice. Otherwise you’ll have some visual novel style cutscenes with two character portraits talking to each other. 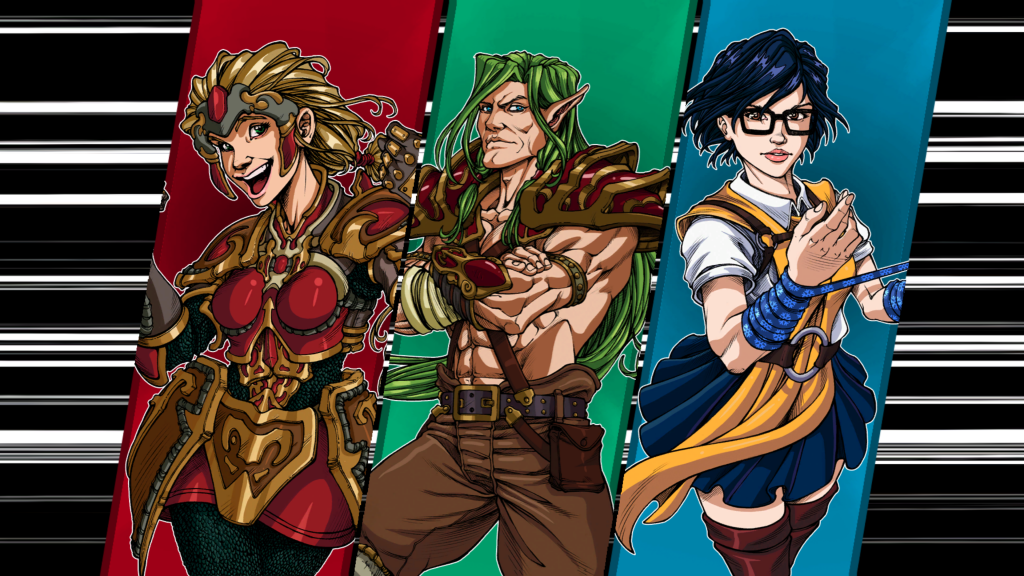 Generally these are quite passive but you get the odd option to choose. Most of the time it doesn’t matter but some are labelled with a yin-yang symbol which means you can decide to make a choice that will change your alignment. Order and chaos, good or bad, whatever you call it if you make pleasant, sensible choices then characters will see you as an intelligent goodie two-shoes. Go the other way and you’ll be seen as rash but brave. Certain scenes will play out differently automatically depending on your nature which adds to the replayability if the game gets its hooks into you.

You’ll also encounter the odd puzzle. There are chests with a lockpicking minigame which has you turning screws in order to move the bolts, where one screw moves multiple bolts but there are also Simon Says minigames and other puzzles which are a little less straightforward. They’re solvable but if you’re impatient or not into this sort of puzzle solving then the game isn’t particularly forthcoming with clues or advice.

Visually things are a mixed bag. I’m not a massive fan of the character designs and the 2D portraits are hit and miss. The 3D models in the fights are okay and nicely stylised though the animations are stiff and overly slow as mentioned earlier. The UI is pretty weak though, with super basic fonts which makes things look a little cheaper than the rest of the game appears. There’s no voice acting bar the odd grunt in battle but the music is decent, though you’ll hear the same tunes often. 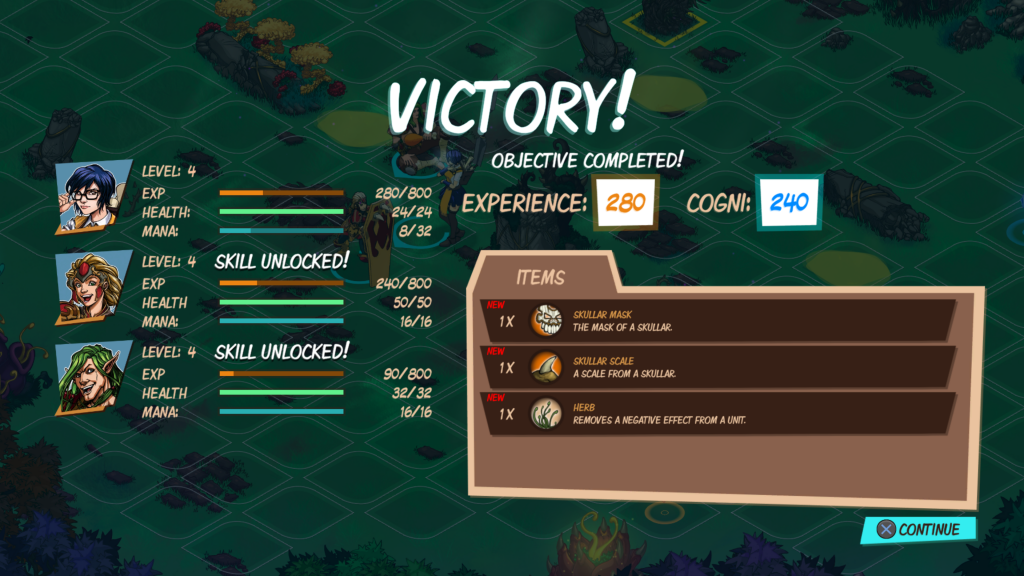 Revere Knights Tactics ended up being a bit of a struggle for me. The basics are there and the package around the fighting is decent but there are just too many battles that play out in exactly the same way and it becomes draining. Certain elements add depth but aren’t implemented in a fun way for the player. If the tactical gameplay does grab you and you don’t mind the map layouts then the alignment mechanic adds replayability and the level challenges give you something to aim for beyond just beating the badguys.

In the end it wasn’t for me with too many design elements being at odds with what I enjoy but fans of the genre should keep it in mind as I’m sure those same design decisions will be exactly what some people will be looking for.

Reverie Knights Tactics
6 Overall
Pros
+ Choices change your alignment for different outcomes
+ Some puzzles to break up the battles
+ Level challenges add a little variety
Cons
- Level layouts make the game feel incredibly repetitive
- Glance mechanic adds an unwanted random element to the tactics
- Fontwork is very cheap looking
Summary
Reverie Knights Tactics is a strategy RPG with plenty of mechanics to play around with. Unfortunately the battles became overly similar very quickly, with the optional challenges and odd puzzle here and there not doing enough to alleviate the tedium.