I do sometimes quiver in fear whenever a visual novel comes my way. Thankfully, Eternal Radiance is perhaps more JRPG than visual novel with a focus seemingly split between the two. Visualnoveler successfully kickstarted a PC release in 2020 and they’ve billed it as an action RPG first and foremost. 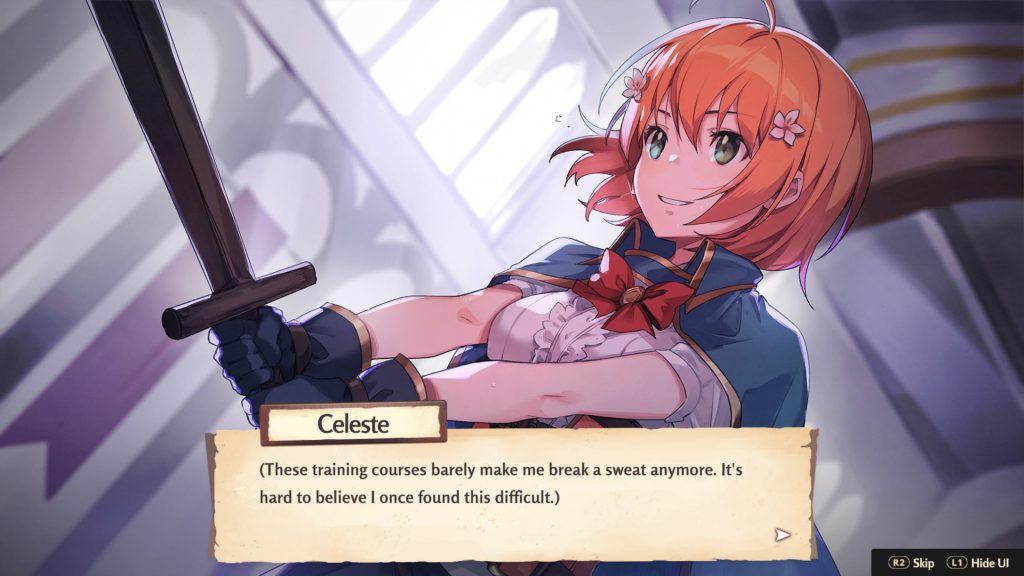 Eternal Radiance follows the story of Celeste. She’s a squire looking to become a knight for the Ashen Order. She’s a typical plucky lead that likes to quote operational procedures whilst possessing a real enthusiasm for the job. Unfortunately, her initiation goes south when a magical artefact is stolen from her grasp. She takes it upon herself to get it back and, along the way, meets some new friends.

It’s a fairly predictable narrative that doesn’t hold too many hooks. Celeste is fairly energetic but none of the other cast really land as well. They’re all just kind of forgettable and I most see them as nothing more than quest givers. I don’t really see the twists as big revelations and, whilst there is some chatter between party members, I never really felt that invested.

Eternal Radiance is effectively a game of two components. Your time in towns is spent talking to folk and it’s all presented in a visual novel style. Locations are all picked from a menu with conversations playing out in text form. Choices can be made but they don’t seem to impact the story in any great detail. It can make your responses feel a little inconsequential, although it can add to Celeste’s character. 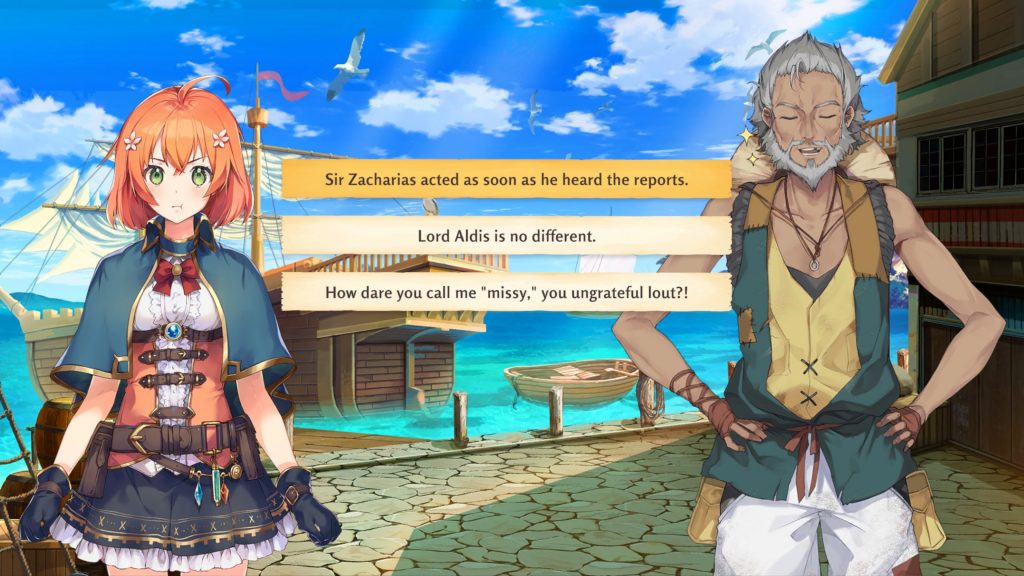 Here’s where you’ll also pick up quests. Some sidequests can be solved within the town itself by just talking to the relevant people. On the one hand, it does remove some of the usual busywork JRPGs can occasionally trade in. It does lead to some trivial completions, though. The majority of these diversions feel like free experience points and I did find some of them impossible to mess up.

There are quests that send you out into the wild which is where Eternal Radiance‘s combat is finally uncovered. It’s pretty simple with you only having full control over Celeste. She has basic light and heavy attacks and these can be mashed together for some combos. She also has a special attack which she can trigger by hitting both shoulder buttons. It’s a good opportunity to hit some serious damage but it does leave her somewhat exposed to counter-attacks.

Defence looks a little flimsy. You have a block which has to be upgraded to really prevent damage. If you time it right, it acts like a parry and negates all damage. You have a roll which can help cover ground or escape trouble. I found myself using that more for evading damage. I do find the combat leads to Celeste tanking damage and using healing items to just keep going. Mana comes into play with magic infused attacks, although I got by mostly with my sword strikes. They offer more devastating damage and can come in handy during boss fights. 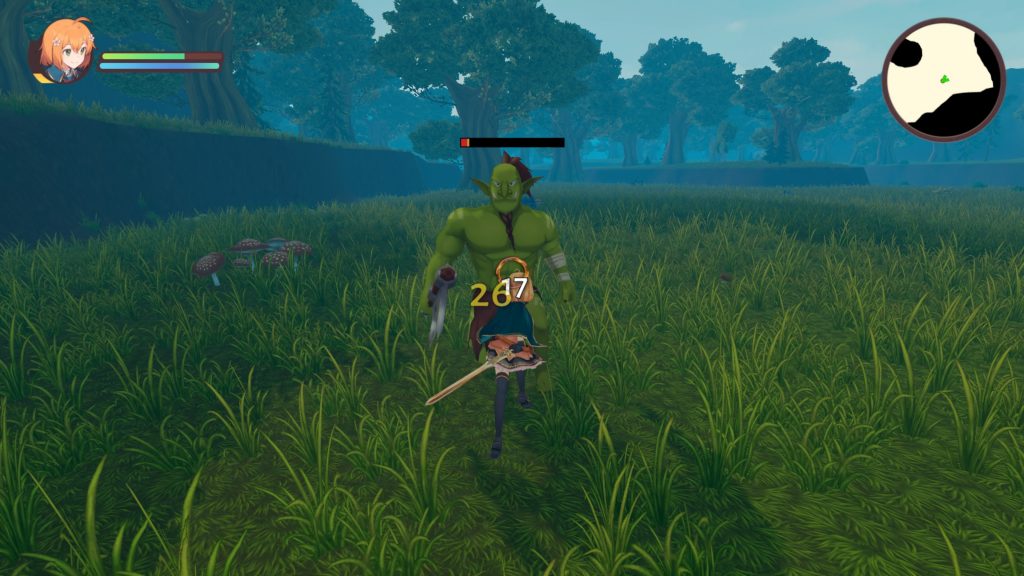 Celeste does come with a defensive and offensive skill trees. They’re fairly fully-featured and does allow you a degree of choice when it comes to finding a way to play. There’s not really enough game to allow for a completely stocked character and you have to spend necessary points to unlock the latter branches of the tree. Despite this, it’s a nice touch and the levels come quick enough not to feel like a grind.

As the game continues, you gain allies to fight with you. Ruby and Valana will spent most of the game by your side and they offer diversionary tactics whilst you find places to heal or opportunities to deal damage. You can trigger their special abilities and prioritise behaviours, but they behave largely autonomously. You can manage their equipment, top up their mana and health and they are fairly useful.

Combat tends to be rather straight-forward with few stakes. There’s a handful of bosses to encounter and these ultimately provide the sternest tests. These battles are more involved and can feel attritional in nature. It’s the closest thing Eternal Radiance comes to a skills check but I did find them easy enough to surpass. With your comrades peppering damage from range, you can wait it out or tank your way through the damage. The latter fights can be chaotic but manageable.

You can also synthesize gear to give it additional boosts. It’s another way to customise your build but I found the most effective gear came to you naturally. It’s there to engage with but it’s not necessary to succeed. As a result, I ended with a cluttered inventory that I had no incentive to sell as gold was easy to come by. I didn’t feel encouraged to experiment and, at least on normal difficulty, I could coast through most encounters. 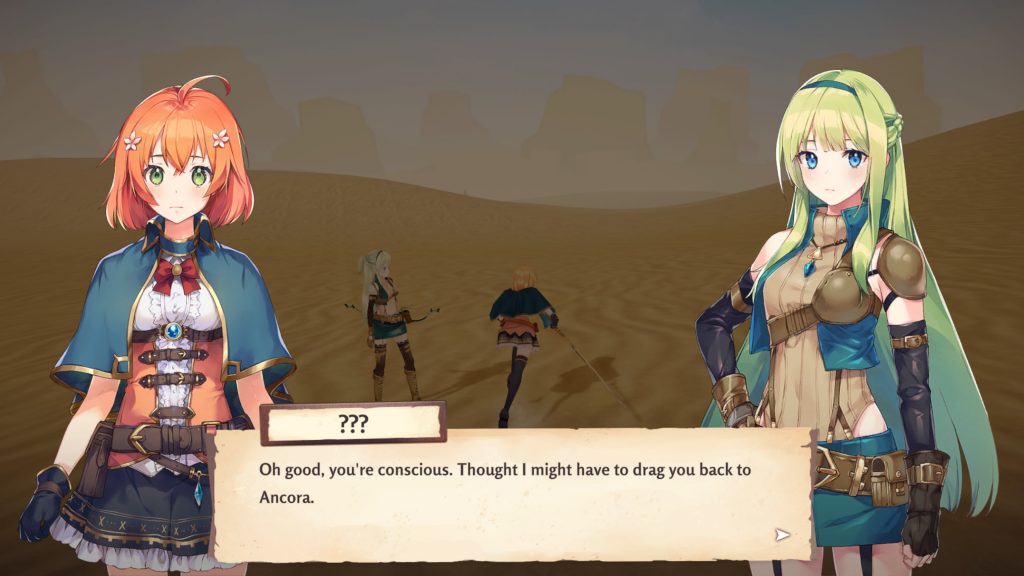 One thing Eternal Radiance does excel at is the soundtrack. There’s a plethora of tracks that all fit well and seem to fit the locations they accompany. The Ashen Order’s castle sounds especially triumphant and no tracks really felt underwhelming or out of place. The character portraits and backgrounds look fairly polished and detailed, although it’s on par with some of it’s contemporaries. Out in the field, the environments look a lot more simplistic. It’s bright and diverse but they feel like basic overworlds. They’re arenas to fight in rather than a place in the universe.

Eternal Radiance just feels a touch too forgettable, to me. The combat’s fairly forgiving and none of the characters really stand out in what’s a fairly simple plot. The soundtrack is well done but most of your time is spent bouncing between conversations with the townsfolk and fighting groups of monsters in barren landscapes. It’s okay but doesn’t live long in the memory.

Eternal Radiance
5 Overall
Pros
+ Decent combat with room for experimentation.
+ Detailed character portraits and backgrounds.
+ A strong soundtrack.
+ Has a good sense of momentum with no real need to grind.
Cons
- Combat arenas looks bland and a little barren.
- Boss fights can feel a little drawn out.
- A largely forgettable cast of characters.
- Reducing some sidequests to conversations takes away any real effort from the player.
Summary
There's potential in Eternal Radiance but it all seems undercut by simplistic combat and some fairly forgettable surroundings. The story doesn't really grab me, although Celeste's enthusiasm pushes things forward. Ultimately, I just found Eternal Radiance to be fairly average. There's systems in place with the combat that don't really feel completely utilised and it can lead to a fairly bland experience.