Cannibal Cuisine is a co-op party game from Belgian-based developer/publisher Rocket Vulture.  The game allows 1-4 players to work together and it won’t take too much work to figure out that the game is something of an Overcooked clone.

For the uninitiated, Overcooked was also a co-op party game where the aim of the game was to gather ingredients, combine them and cook the resulting combination to order and that’s very much the core mechanic of Cannibal Cuisine, but as this game’s title might suggest, there’s a bit more to it in this game. 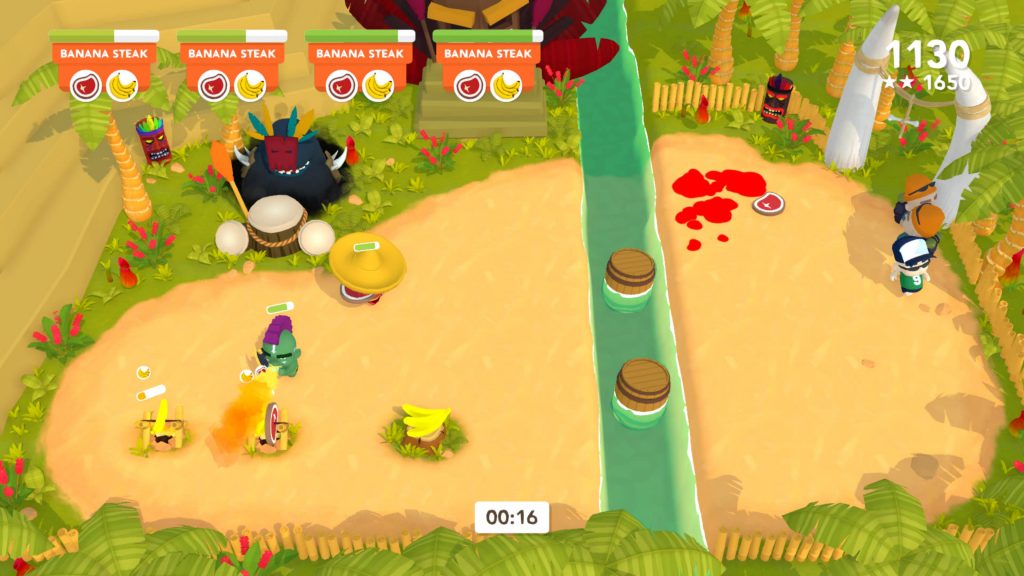 You play as a chef of sorts who has to keep the god Hoochooboo well fed.  To do this you need veggies, which are gathered from set points on each level, and meat.  Meat is a little trickier to source.  To get that you have to look to the tourists that come to visit the tropical paradise that the game is set in.  And then you need to chop them up!

Meals are generally a combination of a vegetable/fruit and one or two body parts.  Once you’ve got the ingredients you need to cook them on a spit and then take the cooked food to Hoochooboo who will have a list of four or more orders for you to work on at any time.  It doesn’t matter if you miss an order as such, you’re not penalised for it, but if you feed them an incorrect order, you’ll be frozen for a few seconds and will lose some points. 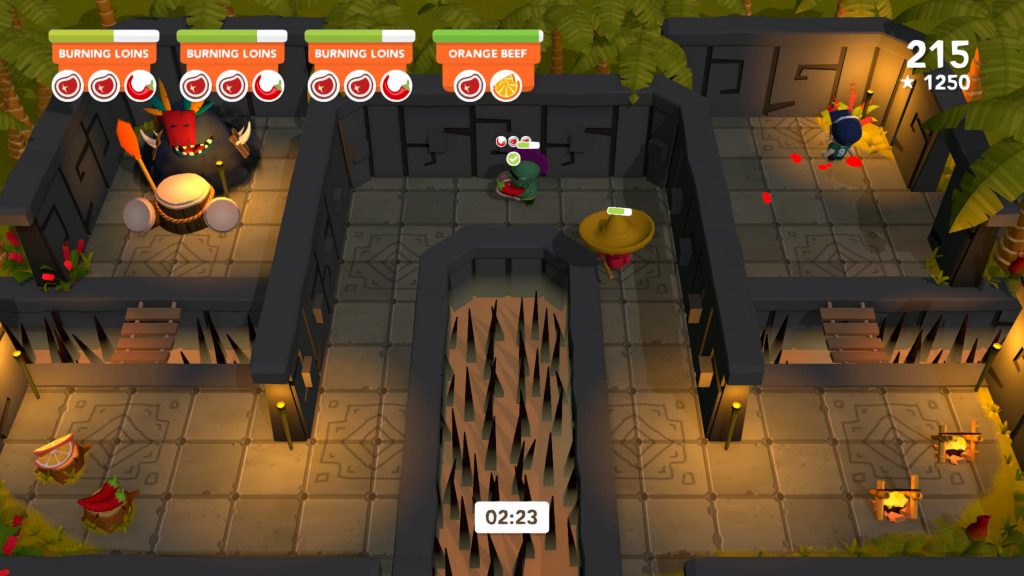 Progress is all based on points in this game.  Each level has a one, two and three star points target.  You need at least one point to finish a level and progress to the next one, while trophy-hunters will be looking to get all three stars on each level which is where the game gets most of its staying power (you’ll likely be able to finish the game’s twenty main levels, four boss stages and the additional bonus levels in an afternoon but three starring everything will take a fair bit longer).  To maximise your points you’ll need to get orders turned around quickly and also take them off of the spit as soon as they are cooked as you lose points for overcooking (which is easily done when you are multitasking between gathering veggies, killing tourists and delivering meals).

As you can imagine the levels start off pretty straightforward but after a while things get a lot more complicated.  Areas start to get segregated off with moving platforms bridging the gap and one-way routes get introduced thanks to jump pads which makes life a lot more difficult.  Also, you’ll get stages with collapsing floors or volcanic rocks hitting you.  Perhaps the trickiest thing though comes from levels that have manual switches that present and remove bridges and switches.  Also the perspective can make some levels a little hard to read. 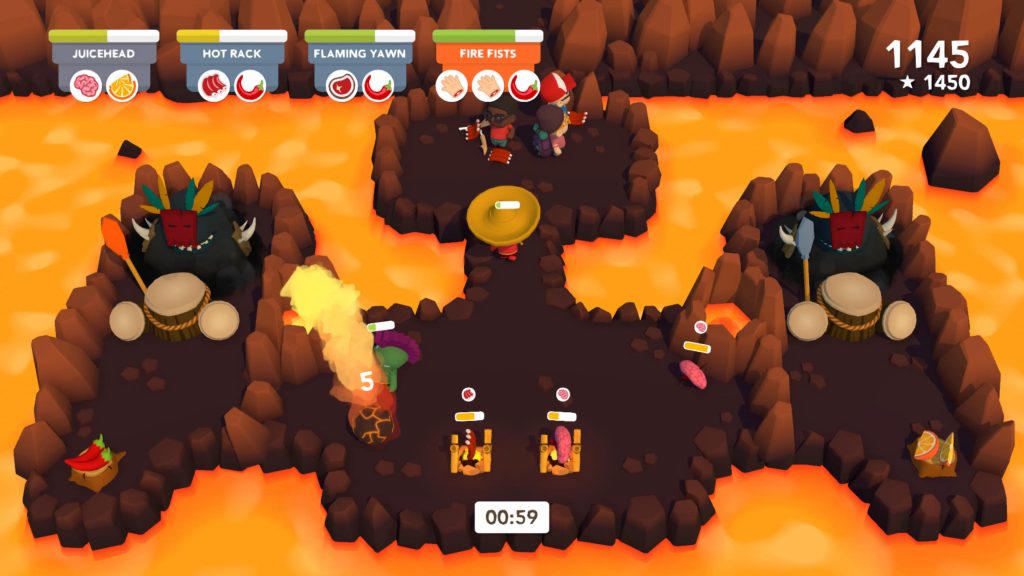 What we really liked are the ‘boss’ levels.  These really mix things up by mixing up boss fights, races against time and other new mechanics which really change up the gameplay which adds some nice variety.  None of these ever end up being a chore either and are all quite well-judged in terms of difficulty.

While the game lacks the sharp presentation of Overcooked, we actually found ourselves enjoying the levels a bit more on this game.  Overcooked has a tendency to get a little too complicated but Cannibal Cuisine only does that on a few levels and is never completely awful.  Indeed, we rarely got three star ratings on our first try but some of the hardest looking levels were the ones where we did. 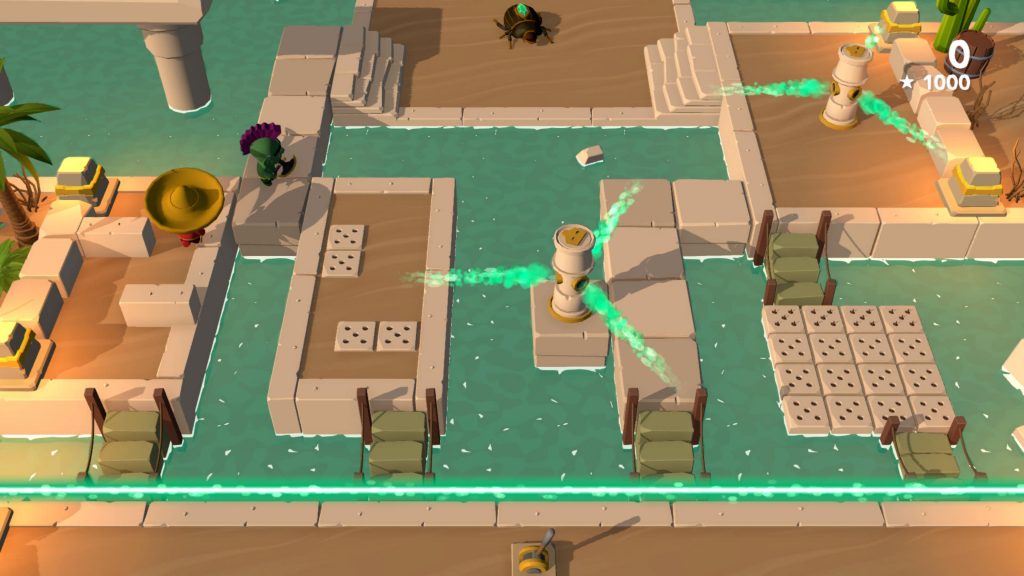 The game’s simple presentation reminded us of the sort of indie stuff that we played back on Xbox Live Arcade which is to say that it’s no oil painting.  The five main areas (jungle, volcano, temple, beach and the Egypt-themed bonus area) are all distinctive but there’s no real eye candy and that’d be fine if it made the levels super clear to read but as we said before, the perspective of the camera means this isn’t always the case.  Also, the sound is a little limited too which just basic effects and some fairly repetitive music that doesn’t change between areas and isn’t really themed around the setting.

But overall we had a good time with this one.  The reasonably small number of levels meant that it didn’t feel like a chore to keep playing through it and made the idea of three-starring it a lot more appealing whereas sometimes games like Overcooked and Moving Out can feel like they get a bit too complex and repetitive (especially when you’re mainlining them to hit a review date target).

Cannibal Cuisine
7 Overall
Pros
+ Fun and frantic gameplay
+ Just the right number of levels
+ Up to four player online play
+ Boss levels mix things up
Cons
- Perspective can be confusing
- Controls are a little loose
- Presentation is very basic
- No PS5 enhancements
Summary
Cannibal Cuisine is an enjoyable spin on the whole Overcooked style of party gaming. It's a bit basic in terms of gameplay and presentation but its simplicity makes it a good choice for random co-op larks.