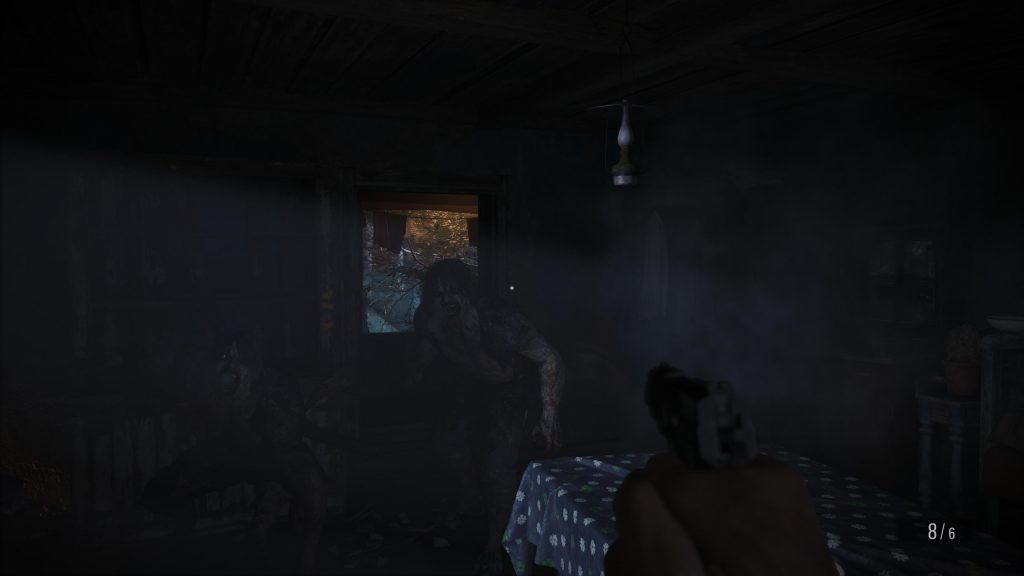 Again you take control of Ethan Winters from a first person perspective but this time he’s been moved, with his family, to somewhere in Eastern Europe after the events of the last game. His home is attacked and after being left for dead in some woods near a small, old fashioned village he must find and rescue his daughter. Obviously being a Resident Evil game this village holds many secrets, some manifest in a way that hasn’t been seen in the series before, but there is plenty that will be familiar as well.

If Resident Evil 7 was a return to its horror roots then Resident Evil Village is a return to the more action focused approach of Resident Evil 4. You are rarely fighting as many enemies as you do there but the systems in place are very nostalgic and fans will recognise them. I will say that the game is less linear than 4, with the titular village acting as a hub that you return to often, with four main areas connected to it which you are able to freely explore before you defeat the boss of that area.

As you explore each zone, including the village, you’ll be finding keys to open up doors which you couldn’t before, potentially puzzle pieces which you can use to advance as well, along with new weapons, ammo, crafting materials and treasure. Defeating enemies will also yield rewards which is a good job as even on standard difficulty the basic enemies take quite a few shots to dispose of. Luckily you can sell the treasure and use the money to upgrade your weapons fire power, rate of fire, reload speed and ammo capacity. 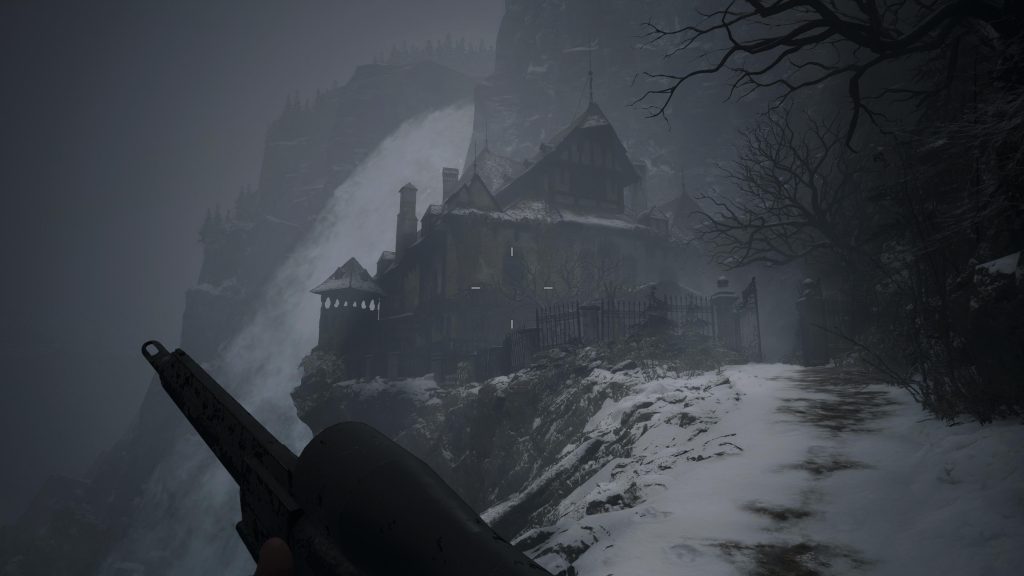 The merchant, The Duke, will also let you buy healing items, ammo, crafting recipes (to craft healing items or ammo using the materials you’ve collected) and weapon attachments. Eventually you’ll also be able to give him ingredients from animals you’ve hunted to boost your stats which isn’t as overbearing as it might sound and is another welcome addition.

As with Resident Evil 4 your inventory only holds your weapons, ammo, ingredients and health items. Crafting materials and key items have their own separate menus which means you never need to worry about not having the right key or crank to progress. There are no magic storage boxes either. In fact inventory space isn’t really a problem at all, with there being many guns (multiple hand guns, shotguns, etc.) and by the end of my first playthrough I was able to hold them all. It was only on New Game+ runs that inventory became a problem as even more weapons become available. You can still move your items around Tetris-style if you need to though.

The gunplay, as has been the case for a while in Resident Evil now, is very enjoyable and visceral. You initially feel a little weak with enemies taking a lot of hits but even then finishing them with a headshot will make it explode in a very gratifying way. There is a good amount of enemy variation too after the disappointing molded enemies from 7. As you progress through the game new enemies will be introduced, some fodder and some more powerful or even unique if you explore beyond the critical path, with many opportunities to do so which usually reward you very handsomely. 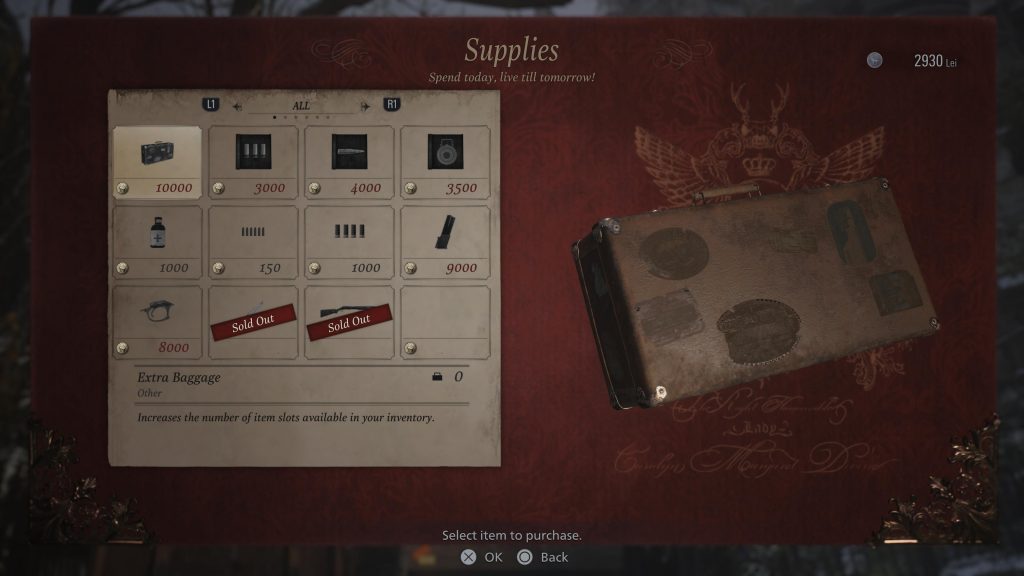 There isn’t a sense of place like with Resident Evil 4 as the fodder enemies don’t talk and everyone else you come across speaks American English, but the village lost in time design does give a familiar sense of unease. The main bosses do talk a lot and I was happy that you get a Metal Gear Solid style introduction to them all in a scene so you can anticipate encountering them later on. They’re all unique as are the areas that house them and I am glad to say that there is no equivalent to the boat in Resident Evil 7 as far as quality goes. Some are shorter but they’re each memorable in their own ways, which is good as I’m not a massive fan of Ethan. The first person perspective probably doesn’t help but his main characteristic is that he can take a beating and keep going. Not that other characters in the series have amazing personalities but Ethan’s attempts at one liners, when he bothers to react to things, are weak.

Unlike the graphics, which are a real showcase for the PS5. Everything looks great, from the enemies to the environments with some beautiful vistas, but on top of that it all runs at 60 frames per second, even if you have ray tracing on. There are some frame drops here and there but nothing major or often and this game isn’t full of reflections so it’s hard to tell what the ray tracing is doing but it bodes well for the future. Another example of how good the RE Engine is, each game is always a graphical powerhouse.

I should also point out the loading, of which there is basically none. You get to the main menu very quickly, press load and in the blink of a eye you’re in the game. It’s up there with the best on the system and there is no loading within the game itself, though you will be riding some conveniently placed elevators. 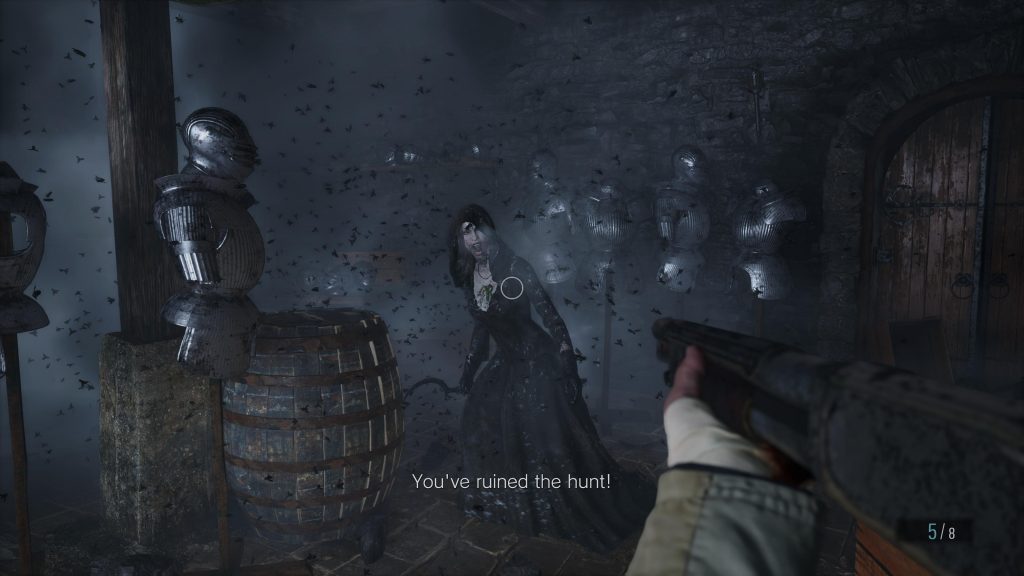 The best Resident Evils always have great replayability too and Village is no different. There are three initial difficulties with another unlocked upon completion. There is a New Game+ mode where you can take all your upgraded weapons into the next playthrough so you can keep upgrading them which is always empowering. Mercenaries mode also makes a return once you’ve beaten the game. You have to buy it in the rewards shop which gives you points for completing in game challenges. Other things to unlock can be new weapons, unlimited ammo for weapons you have maxed out in the game, models and artwork.

Mercenaries mode is a combat mode where points are rewarded for kills, combos and the time it takes to complete a level. It’s always been fun in each iteration but here it takes a little rogue-like turn, rather than having different characters you can buy whatever loadout you wish and within levels you’ll find orbs that’ll give you new abilities like better headshots or faster running speed. You get rewards for getting high enough scores and figuring out the most lucrative route through each level is very addictive.

I should also point out that Resident Evil Re:Verse, the player versus player deathmatch game, will be given to those who have bought Resident Evil Village for free (much like Resistance was with 3) but is not available at launch. 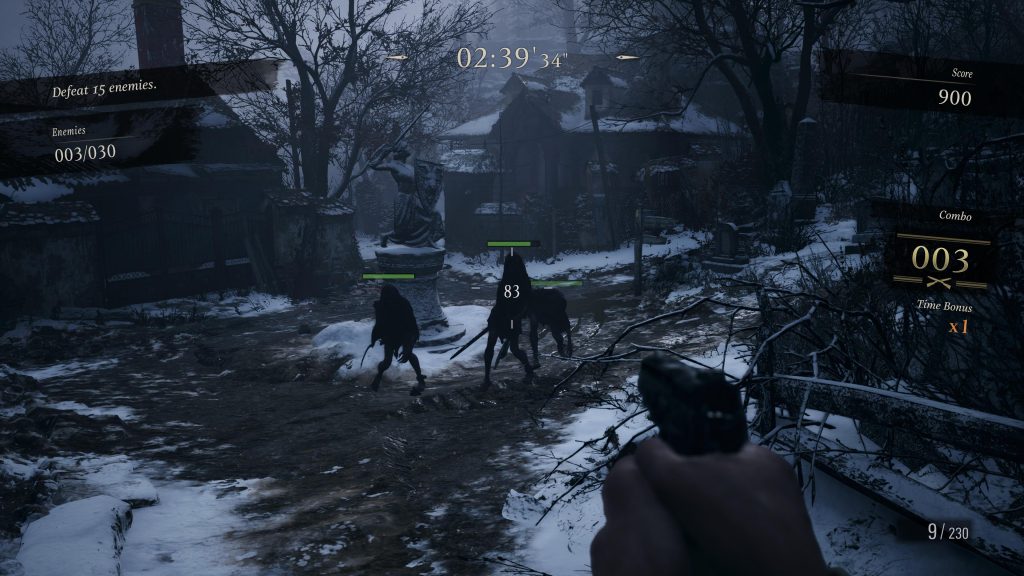 Resident Evil Village is another excellent entry into the series. It takes a lot of cues from the more action packed Resident Evil 4 which will be a positive to some and a negative to others but it’s very entertaining and the gunplay is superb. Ethan doesn’t do it for me as a protagonist but the enemies you face off against are memorable and keep your adventure moving at a good pace. I completed it in about twelve hours and jumped straight back in for a second go which I’ve also finished now, between Mercenaries runs, so I know the replayability prospect is strong too. The fact it runs so well on PS5 is just the icing on the cake.

Hopefully when the time comes there’ll be a PSVR2 patch as well, you know it makes sense Capcom. You just have to wonder how they’ll integrate the Roman numerals into the title of the next game. Resident Evil Phoen’IX’ perhaps?

Resident Evil Village
9 Overall
Pros
+ Good enemy variety and great combat encounters
+ Gorgeous graphics, with ray tracing at 60fps on PS5
+ Plenty of replayability with rewards to unlock
+ Basically zero loading
Cons
- Ethan isn't a great protagonist
- More horror themed action than anything fear inducing
Summary
Resident Evil Village is another fantastic game in the franchise. It leans towards action, rather than slow paced horror this time but also adds a large helping of exploration for those that want to see everything. Ethan isn't great but his opponents are very colourful and keep you interested in moving forward. Add the replayability of harder difficulties, New Game+ and Mercenaries mode and it's a game PS5 owners should not ignore.