WarDogs: Red’s Return is an old-school 2D beat ’em up in the tradition of games like Renegade, Double Dragon and, most notably, Final Fight.  It comes to us from QUByte Interactive and Brazilian coders Mito Games.  In it you play as Red, an anthropomorphic fighter (human body, dog’s head) as he returns home after a year away only to find the streets have been taken over by local gangs who are being controlled by some sort of shadowy boss.  Standard stuff for this genre.

The game offers three modes.  A basic tutorial is up first and this explains the fairly simple controls that allow you to kick, punch and jump.  These can be used in combinations to keep your opponents defending while you build up combos.  The tutorial also explains your ‘rage’ meter which allows you to pull off special attacks that either buff your attacks, apply some quick healing or allow you to attack multiple enemies at once.   You also have a block button although this is linked to a block meter which will go down if you overuse it, making your defense less effective. 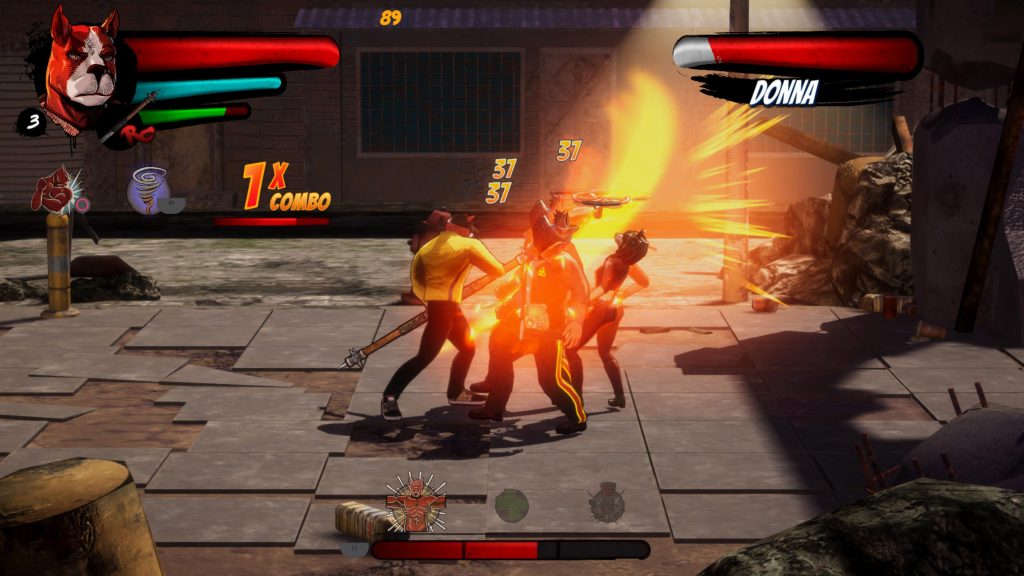 Once you’ve got that down, you’re ready for the streets.  This gives you two options, a fairly random mission mode or the game’s story which is where you’ll want to go.  This mode offers eight levels of standard beat ’em up action and scenarios.  You know the kind of thing.  You’ll be walking from left to right, encountering mobs and beating the Pedigree Chum out of them (yep, they’re mostly all dog-men too).  They usually show up in twos, threes or fours as you’d expect.

Occasionally the game will mix things up by having you go left for a bit but most of the variation on offer comes from the enemies themselves.  At first you’re dealing with street thugs but eventually your foes will show up with seemingly magical powers or some sort of technological advantage to make your life that much harder.  When we singled out Final Fight earlier, that’s really down to the environments as this game copies the formula from Capcom’s famous old fighter by having levels set on trains, in boxing rings, in various street locations and, of course, the obligatory elevator section.  So while none of it is particularly original, WarDogs does at least try to cram in some content here. 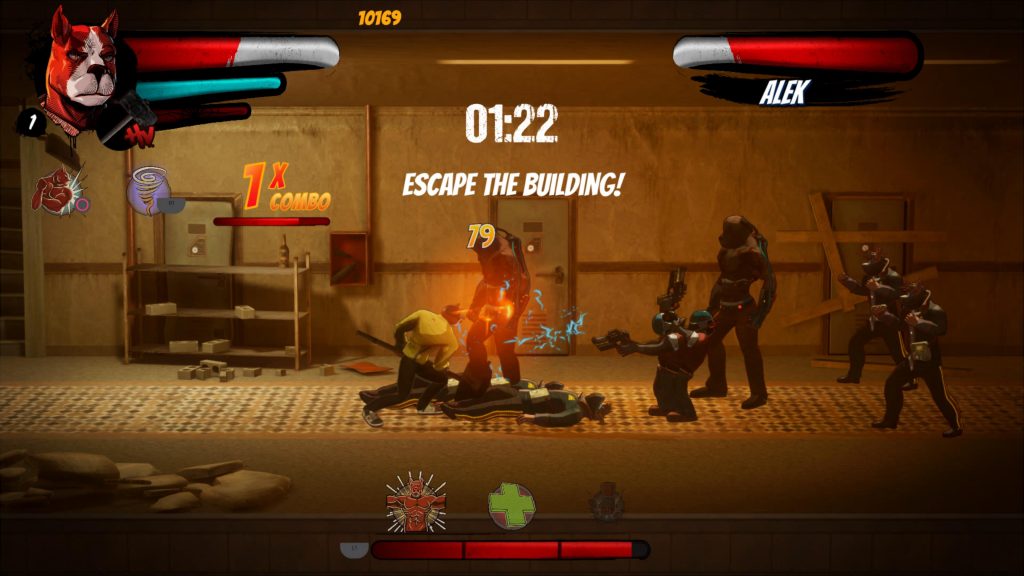 The story mode does have a weird structure to it though.  You start with three lives but when you finish a stage, that’s the game now over.  To play the next level, you have to restart the game and pick that level from the stage select screen.  This means you start with the full compliment of lives but it does also mean that there’s no score chasing to be had and no satisfaction from going for 1CC runs or anything like that.  Such a strange choice, albeit not a game-ruining one.

Playing on the default difficulty, we didn’t really have any problems getting through the game on our first try.  The only sticking points were the occasional boss battle or certain awkward enemies (particularly these shielded ones with drones) but the ability to heal yourself did really help with that.  You also get to boost your stats a bit by spending the in-game currency you earn on ‘chip’ upgrades.  These boost your attack and defense stats but we didn’t really feel it as we just seemed to be leveling along with the game itself so the difficulty seemed kind of constant.  We’d have liked to unlock new moves and techniques as opposed to these less meaningful stat upgrades.  You can also spend your money on a new outfit with hats, tops, trousers, shoes and accessories all being available too. 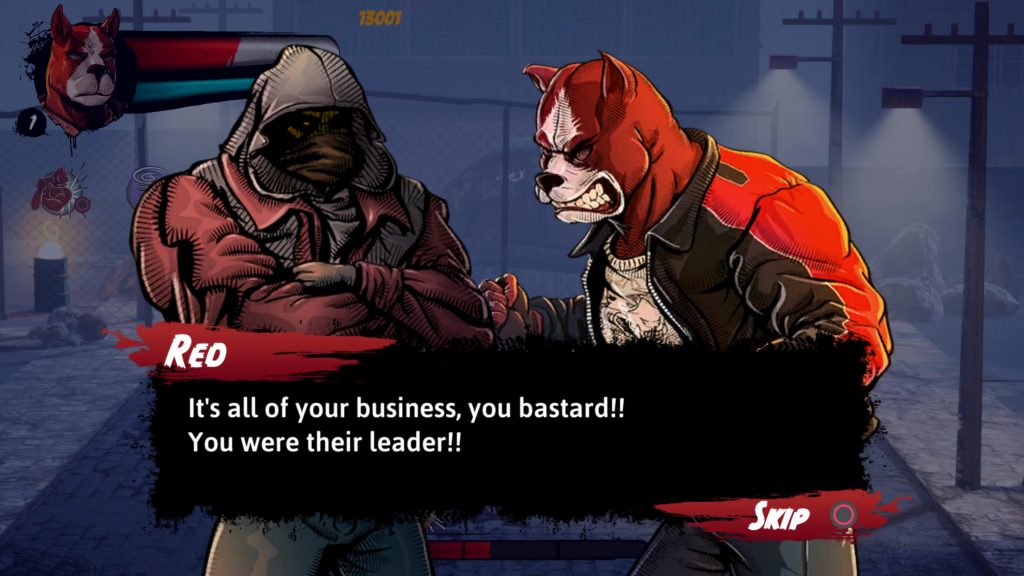 With no co-op options available, you’ll really see everything in one play session here.  The trophies ask you to play through it all on hard but that’s about it.  The extra mission mode just offers longer, tougher battles but seemed pointless (although it does allow you to unlock better ‘chip’ upgrades).  That said, an arcade title like this should be relatively short.  You wouldn’t want this to be five to ten hours long as it’d just drag, so we weren’t unhappy about its relatively short lifespan.

Visually the game is okay.  Initially the flat, cartoonish graphics reminded us of terrible games like Cruz Brothers and Post War Dreams but it holds together okay despite the oddly speedy motion of the main character and a sense of detachment between him and the environment.  The switches to 3D on some moves were quite nice and makes it feel less like a mobile game and there’s enough detail to keep things interesting.  The only real issue is how the story is told which is via comic book style panels with a lot of text.  Far too much text.  We bailed on the story very quickly.  This is essentially an arcade game about dogs punching other dogs so why overanalyse it? 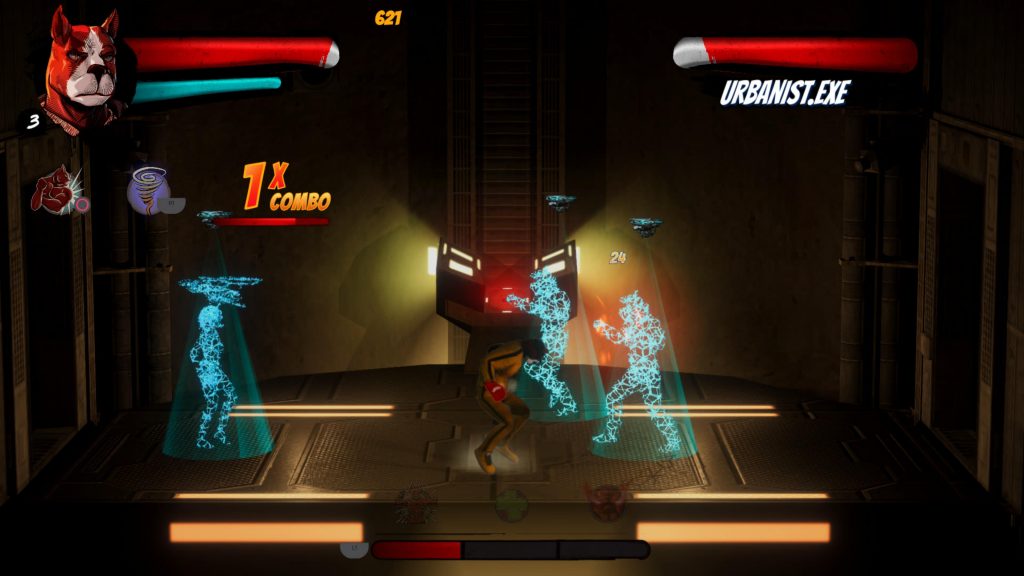 But overall WarDogs does a good enough job of taking a classic genre and putting on the previous generation of consoles.  It won’t wow anyone, it won’t turn any heads and you probably won’t play it more than a few times but as a mindless button mashing, dog fighting, Final Fight cloning bit of fun, we can think of worse ways to spend an evening on your PS4.

WarDogs: Red's Return
7 Overall
Pros
+ Authentic old-school beat 'em up action
+ Controls are well considered
+ Has enough content to keep it interesting
Cons
- Story mode structure is a bit weird
- A bit too easy to button mash your way to success
- Upgrade system is unsatisfying
- Too much plot and it is badly presented
Summary
WarDogs: Red's Return is pretty much a canine-focused clone of Final Fight and it hits all the same beats that the '80s beat 'em ups did but it works well enough as a tribute to the genre. The presentation is off-kilter, the plot is overly long and dull and we had a lot of success from just mashing the kick and punch buttons but overall this is a fun fighter which will keep you entertained for an hour or two at least.