I’d class myself as quite a Resident Evil fan. I’ve played all the mainline entries and got the platinum on the majority that offer it as well. To this day I’d rank the 1998 release of Resident Evil 2 up there with the best of them. The setting, music, multiple scenarios and an ever evolving boss makes it a very memorable title within the series. Also up there is the remake of the original game, which walked that fine line between keeping things as you remembered them and adding new elements perfectly. Now we have a remake of Resident Evil 2 which takes a different approach, trying to modernise the gameplay whilst keeping the essence of that 1998 release. 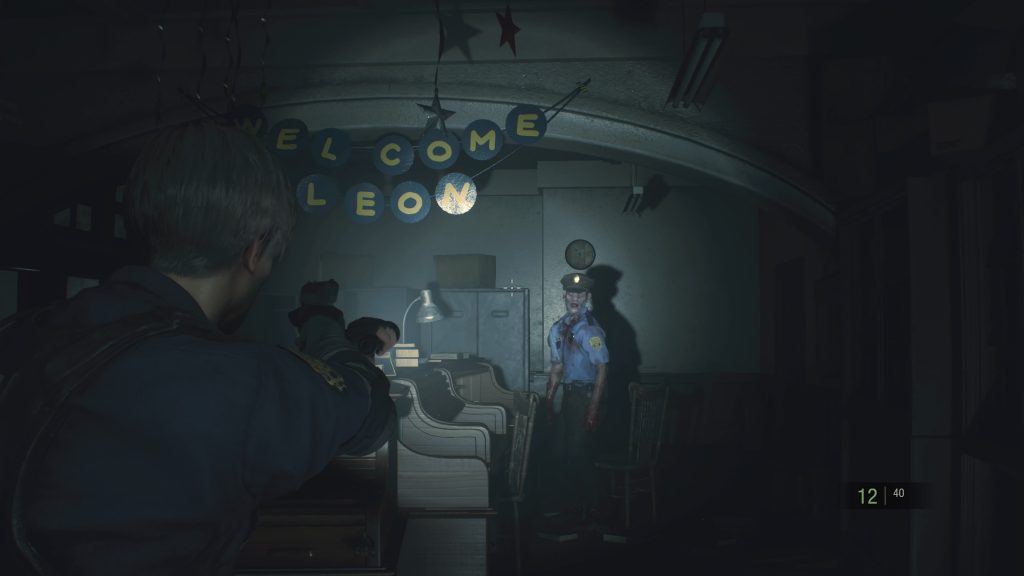 Fans of the title won’t be surprised by the story. Set a couple of months after the mansion incident of the first game, Leon S. Kennedy is heading to Racoon City Police Department to start work as a cop. Claire Redfield is a student who is heading to Racoon City to find her brother Chris (one of the main characters from the first game), who works for the S.T.A.R.S department of the RCPD. Racoon City has been overrun with zombies following the mansion incident and it doesn’t take long for Leon and Claire to realise this.

A brief tutorial section has either character pull up to a gas station only to discover what few survivors are there are not long for this world. Our two protagonists bump into one another and help each other escape towards the Police Station hoping for safety. An unfortunate series of events has our two heroes split up, either side of an explosion and so their separate adventures begin.

Like in the original release you spend a brief time in the city before reaching the first major portion of the game, the Police Station, and it’s here that the classic Resident Evil gameplay kicks in, but from a different perspective. Viewed from over the shoulder, you control Leon or Claire as you’d expect, rather than the tank controls that I personally had no problem with but confuse and infuriate so many. You’re still limited, you have to aim your gun to fire it, you can move whilst aiming but far slower and you’re encouraged to stand still to steady your aim. You don’t have any context sensitive actions like the latter Resi titles or dodges, you can only walk, shoot, run and interact with items.

Luckily that’s enough to survive and just enough to make you feel vulnerable. If there’s one thing that I can’t praise highly enough it’s that the zombies in Resident Evil 2 are a real threat. They’re the most common enemy and each can take a huge amount of shots to the head before they go down. They may not stay down or you’ll return to an area later only for them to get up yet again so you’ll end up using a lot of ammunition just for a single zombie. They’re quite aggressive too, never running but they’ll happily launch themselves at you, latching on and taking a bite out of your neck.

You’ll find a lot of ammunition and a variety of weapons as you explore the Police Station and beyond, but you’ll still need to pick and choose whether to take down an enemy or try to weave past it as you may have plenty now but you don’t want to run out at a critical moment later on. As is the classic Resi way you’ll be returning to areas often as you find a new key or puzzle critical item which will allow you to make progress and if you’ve taken out the enemies then things will be easier, if you haven’t then you’ve saved ammo but will have to risk your health every time you return. Sub-weapons are limited but will save your hide once, or a knife will work until it breaks as long as you retrieve it from the enemy you stabbed it into in defence.

The Police Station houses many recognisable corridors and rooms. It’s not exactly the same but fans will be able to identify the majority of the rooms but now with fantastic real time graphics instead of prerendered static backgrounds. Things are less beholden to the original as the game progresses but one very big change is the inclusion of Mr X. Returning players will remember him as the trench coated Tyrant who was an obvious inspiration for Nemesis in the following game, but who only existed in Scenario B for each character. As well as being able to choose between two characters, once you completed Scenario A for a character you unlocked the other character’s Scenario B, which showed you what that character was up to whilst you ran through the game. There were even items that if you picked them up in the first playthrough would be missing for the second character. 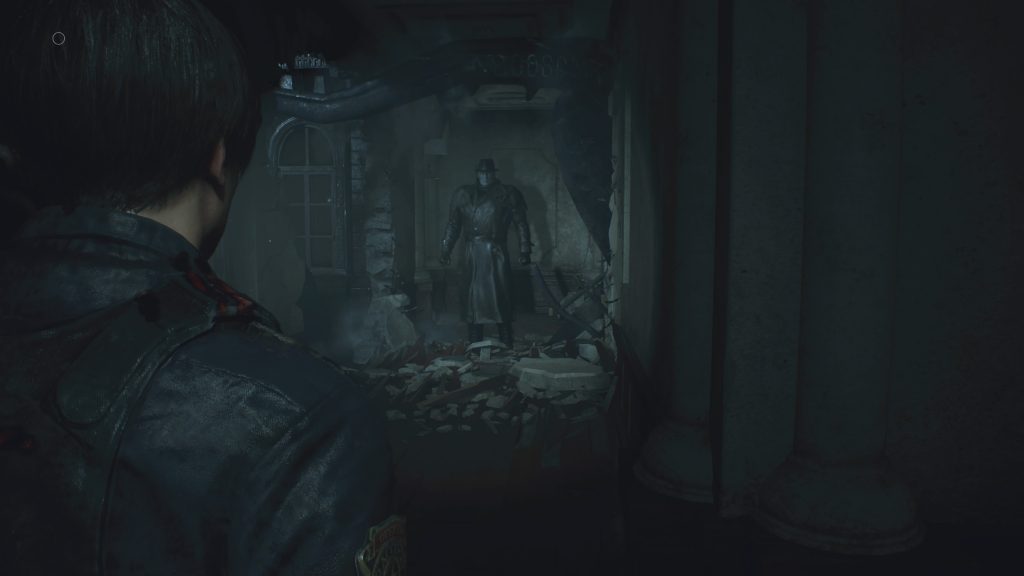 It was awesome and playing Scenario B for the first time and encountering Mr X and realising that this playthrough would be very different was incredible. Unfortunately with this remake, although there is a Scenario B (called 2nd Run) it is far less awesome and basically just plays like a more condensed version of the A playthrough with no extra story. Mr X exists in all playthroughs and although each character encounters different survivors and takes a different path through to the end of the game, their B Scenario is so incredibly similar as to be a little disappointing.

What Mr X does do though is introduce a random element to proceedings. Once you encounter him he will patrol the Police Station looking for you and once you’re in his sights he will stomp towards you with purpose. Combined with any enemies wandering the halls Mr X can cause all sorts of problems when all you want to do is use your new key. Some head shots will slow him down briefly but he will turn up again sooner or later and the sound design makes sure you know it, his stomping feet being audible from multiple rooms away. Apart from some jump scares I didn’t find Resident Evil 2 particularly scary but Mr X can certainly induce panic at the least opportune times.

There are multiple difficulties, from Assisted which helps with aiming as well as making it easier in general, to Normal, to Hardcore which makes everything more aggressive, do more damage and there’s no check-pointing, only manual saves using ink ribbons like the good old days. As well as the two characters and their B Scenarios, which get graded for speed, offering rewards and extra playability, you unlock a shorter but more difficult run through a gauntlet with the Umbrella soldier Hunk and Tofu, a joke character who only has knives, and others beyond that. 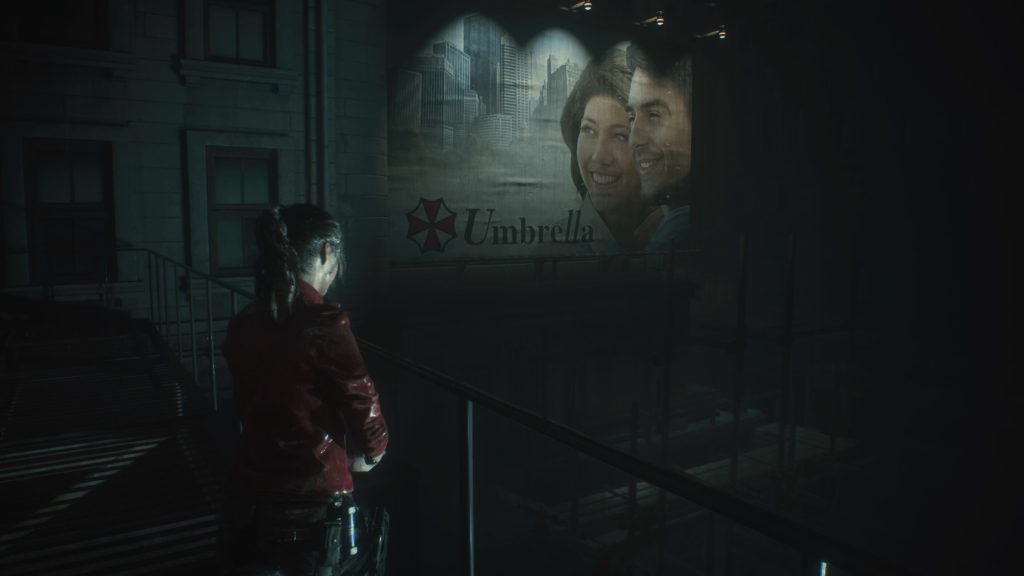 You can’t complain about the amount of game here. I’m personally a little disappointed in the B Scenarios being incredibly similar to the A Scenario compared to what we got in the 1998 release but my first completion with Leon took about six and a half hours and if you end up going for higher ratings or unlocking all the in game achievements then there are many more hours of content here. There’s also some free DLC coming soon to add yet more content.

My initial run through Resident Evil 2 was a blast and it feels like as close to a classic Resi title whilst using modern controls as you could possibly get. The acting is slightly better whilst not being stellar, you’ll be backtracking plenty and managing your inventory a lot but a lack of major load times combined with the new controls will bring new fans on board who may have found the old games slow and cumbersome. I’m now going to go back and try to S rank Leon’s playthrough and then I’m going to try a Hardcore run to try and get those sweet unlocks. The last one didn’t last long so wish me luck.

Resident Evil 2
9 Overall
Pros
+ Brings the classic gameplay to the modern era
+ Lots of content
+ A very good looking game
+ Zombies are a real threat again!
Cons
- B Scenario is far too similar to the A
- Apart from the odd jump scare it's not that scary
Summary
Resident Evil 2 is the closest you'll get to old school Resi whilst modernising the gameplay. The way Scenario B has been handled is disappointing but beyond that you'll find plenty of replayability across the multiple characters and modes. The puzzles and exploration will delight old fans whilst the improved controls are bound to create some new ones.