Q-YO Blaster is a horizontally-scrolling shoot ’em up from South American developers Team Robot Black Hat.   As a shoot ’em up in the classic arcade style, that means it needs to fall into one of the major archetypes and ultimately this one aligns itself to the Parodius way of doing things.

Here you play as one of a varied selection of characters that are taking a weird alien insect army (that reminds us, remaster Apidya please) and so you’re set in world that looks big in the same was as you get from games like Micro Machines.  Some unremarkable text screens explain the plot but we’re not really fans of games that present their story this way, especially when it kind of makes no sense and is hard to follow.  But, that said, we couldn’t care less about plots in shoot ’em ups.  What matters here is the gameplay. 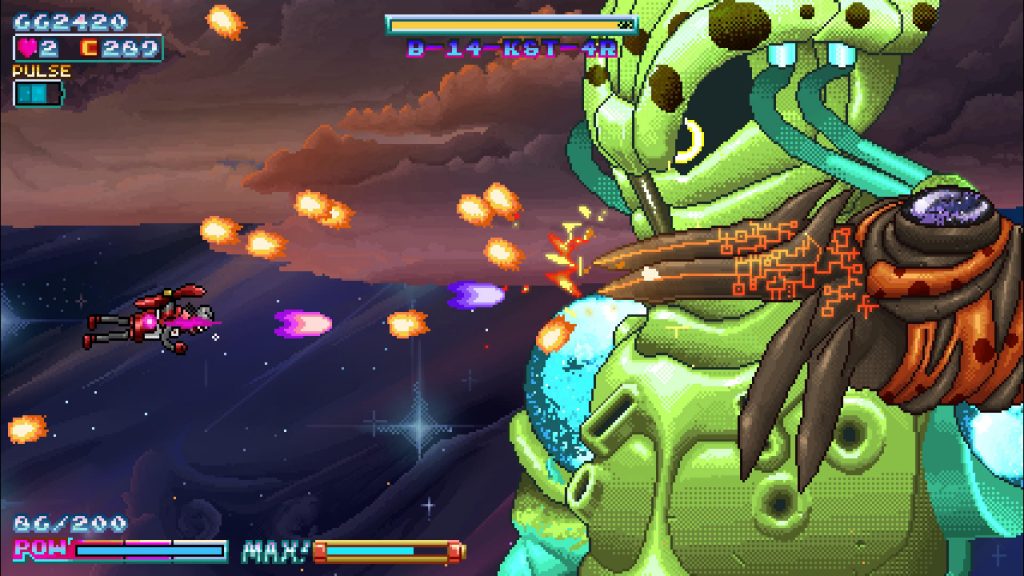 That initial variation is quite apparent when you start Q-YO Blaster.  Firstly you get to pick from three damage levels (+damage, +endurance or a mix of both).  That choice will then give you a further choice of five or six (depending on the choice) characters to play as each with varied stats in damage, speed and fire.   Aside from the awful font used for character names, this choice isn’t clear.  Fire could be fire rate or maybe it means something else.  Anyway, it doesn’t matter.  What’s good though is that all these characters look different.  From anime style people to robots, polar bears and a whole lot more, it’s kind of cool to see.  That said, if you want to do well you won’t be picking anyone who favours speed over firepower.  More on that later.

The choices don’t end there either.  You then have to pick your ‘special’ ability.  This can either be a powerful, but brief, laser attack or a shield.  Once you’ve chosen that then you’re into the main game.  Well… kind of.   You then get a tutorial (thankfully this is skippable) that explains the basics of the game. 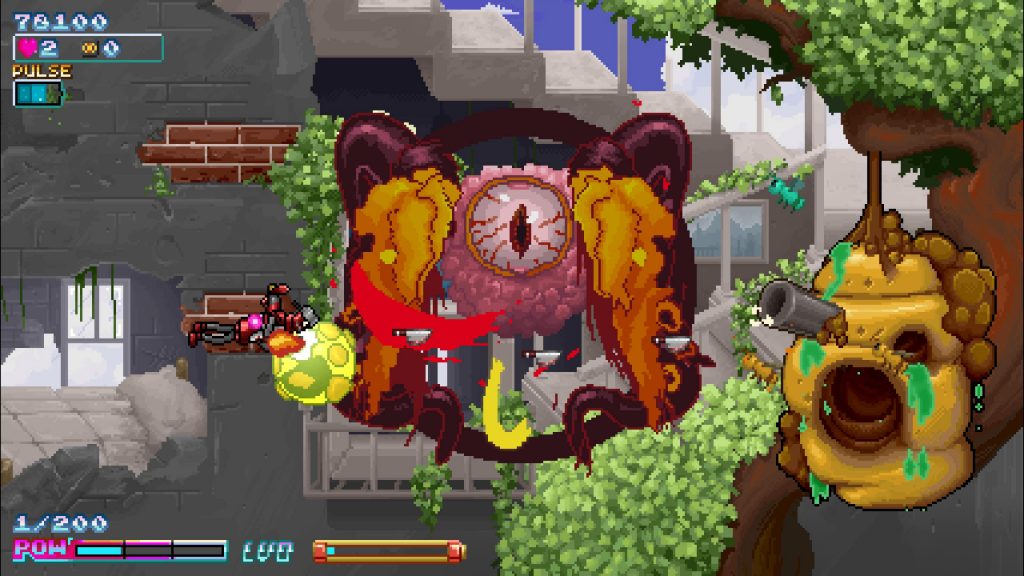 Obviously, being a shoot ’em up, the key things are movement and shooting but there are a few more things to consider also.  The fire button can be tapped (for more spread) or held (for more intensity), obviously holding it down like in most shooters is the way forward.  Shooting enemies makes them drop gems.  These gems fill your power bar, allowing you to fire off that special ability.   However, if you fill the special bar and keep collecting gems, you’ll eventually nab yourself an extra life.  You also get a useful pulse attack that turns bullets into gems and, if that’s not enough, there’s an ‘assistant bar’ that you fill up by killing enemies and when it is full, a large character will appear on the screen and damage all enemies in range.  Like a smart bomb but one that you can’t control, which is kind of annoying (you activate it by holding down the fire button which you’ll likely be doing by default).

Anyway, then you’ll get a bit of the nonsensical plot before being thrown into the action.  You then get eight short levels each capped off with a boss battle.   This is the usual kind of thing.  Small enemies flying at you and trying to blast you out of the air, larger enemies that take a bit more firepower to down and bosses that fire off bullet hell patterns and can take as long as the rest of the level to take them out, if not longer. 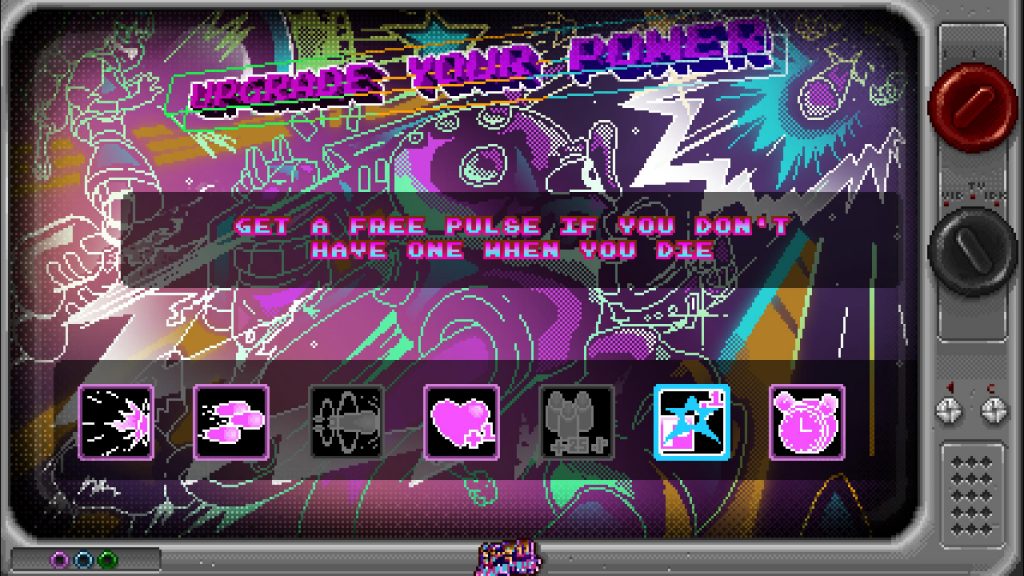 While being nothing spectacular, it all plays okay.  It’s very 2D, very old-school and so it can all feel a bit ‘flat’ and the eight-way movement feels restrictive and a little inaccurate on an analog stick (the d-pad is of course an option but yuck!) but generally it feels alright to play.  The various gameplay mechanics don’t get in the way too much, letting you focus on the action.  It’s quite a tricky game though and this is down to a couple of factors.

Visually, the game is quite detailed which can make it hard to see every single attack.  But most of our deaths came from the bosses who do step up the difficulty quite a bit.  The last boss in particular was a bit of a nightmare, even on the game’s easiest difficulty.   You’ve got the choice between easy, normal and extreme but trust us, you don’t want any part of that last one.  The game does balance this a little by offering up infinite continues but that can be quite unsatisfying if all you are doing is effectively cheesing your way to the end.

That’s probably the main problem with the game though.  Difficulty spikes and the way that some characters aren’t all that useful mean that things can feel inconsistent.  As such, it’s hard to know who this will appeal to.  Hardcore shoot ’em up fans may find it all too taxing to bother with the 1CC, especially with it being a very niche indie title, but reasonably casual gamers might fare better, by abusing those infinite credits and just seeing the crazy enemies and levels. 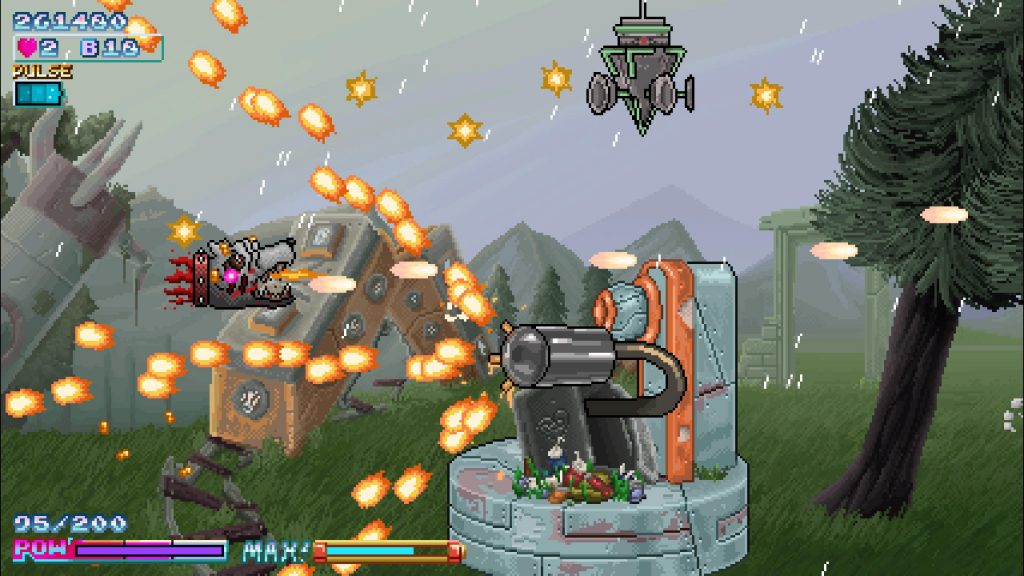 Indeed, that’s the game’s strength.   We’re never particularly happy to see pixel art visuals especially when they go for an 8-bit console look rather than a more stylish coin-op aesthetic.  But all that you can do with pixel graphics to make them ‘good’ is to have lots of creativity and this game delivers with with fun levels, cute enemies and huge bosses.  It also has a mild Cuphead-style of animation to it.  Not nearly as accomplished, no, but there’s a timeless style to the animation.

So while it might not have the presentation of a Soldner, or the absolute precision of something by Cave, Q-YO Blaster does a pretty good job providing a cheap and cheerful shoot ’em up that’s fun to look at and has a bit of replay value as you check out the wild and wacky array of characters to play as.  It might not be one for hardcore shoot ’em up fans, but it’s a decent little effort.

Q-YO Blaster
7 Overall
Pros
+ Fun backdrops and character designs
+ Playable and enjoyable
+ Doesn't outstay its welcome
+ Large variety of playable characters
Cons
- Pixel art style is a bit dated
- Some bosses are a bit of a nightmare
- Some playable characters aren't all that useful
Summary
Q-YO Blaster is a low-budget shoot 'em up in the classic style that brings Parodius-style visuals to the party but could use a bit of refining in the gameplay department. It's fun and gloriously silly though and worth checking out for some cheap arcade thrills.