It’s the most spookiest time of the year. That’s right, September! We just had the rather excellent Tormented Souls and now The Medium lands on PS5 after spending some time over on the Xbox and PC. It was pretty hyped up on its initial release, but unless you followed it closely you might not be aware of what type of game it is. I know I wasn’t. 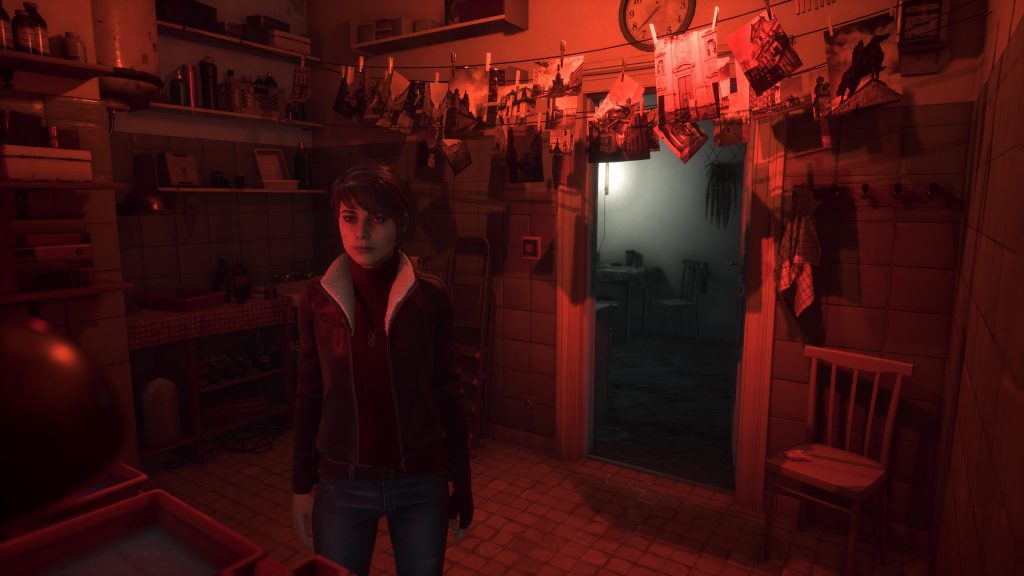 You play as Marianne who has just lost her adoptive father. She returns to the funeral parlour that she once worked at with him to say her final goodbye. Whilst preparing for his funeral she receives a mysterious phone call requesting that she visits the Niwa Resort, quoting a recurring dream she has. How does this person know her? How do they know about her dreams? She goes to find out.

She’ll do this by exploring environments from a third person fixed camera in quite a linear fashion. You’ll follow a path, whether that’s through a forest or corridors of a building. Along the way you’ll find lots and lots of different notes and postcards to pick up which provide some story and sometimes the odd item to pick up to use later. These wandering sections are broken up with quite lengthy cutscenes before you go back to following the path. 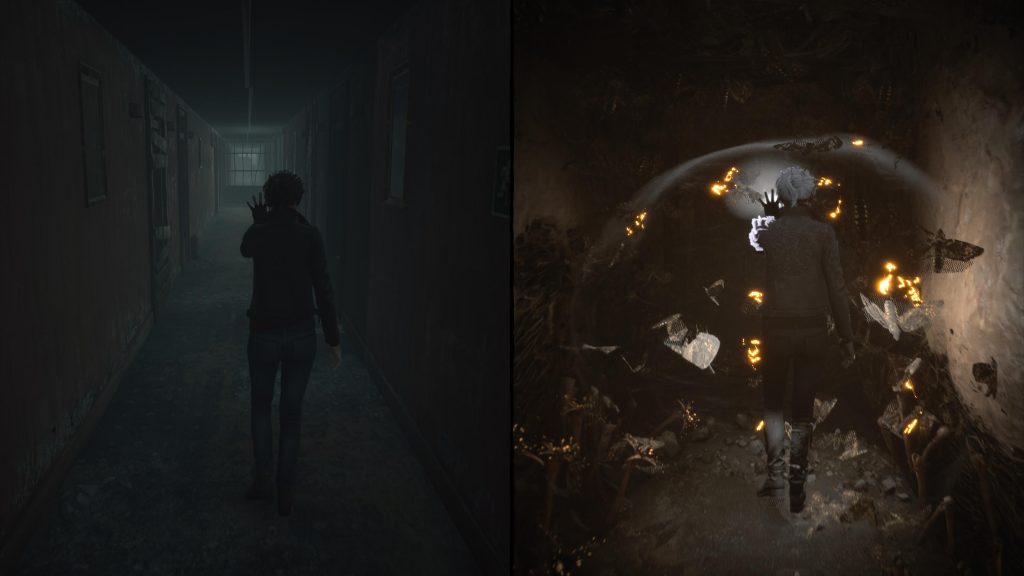 Marianne isn’t your average funeral worker however. She’s a medium, which lets her interact with another plane, where dead people reside, that the average person can’t see. This isn’t always active, but at times the game will force a split screen where she exists in both planes. This is the game’s strength, as the planes aren’t exactly the same but if Marianne is blocked off in one plane then she’ll need to figure out a way through in both to progress.

That’s not to say they can’t be separated at all. She can have an out of body experience which lets her spirit form wander free for a time which is used for certain puzzles. Puzzles is maybe a bit too strong a word, in general things are pretty straight forward throughout with only one at the very end needing you to actually think about your actions, rather than just pick up everything you find and use it when required.

Otherwise the game is pretty straightforward. It’s not a survival horror game, more a walking sim with horror themes. The game is incredibly linear, with paths slamming shut behind you as you progress and cutscenes taking over if you happen to interact with the correct object. There is the odd stealth section thrown in but these are few and far between, you’re mostly just following the path laid in front of you. 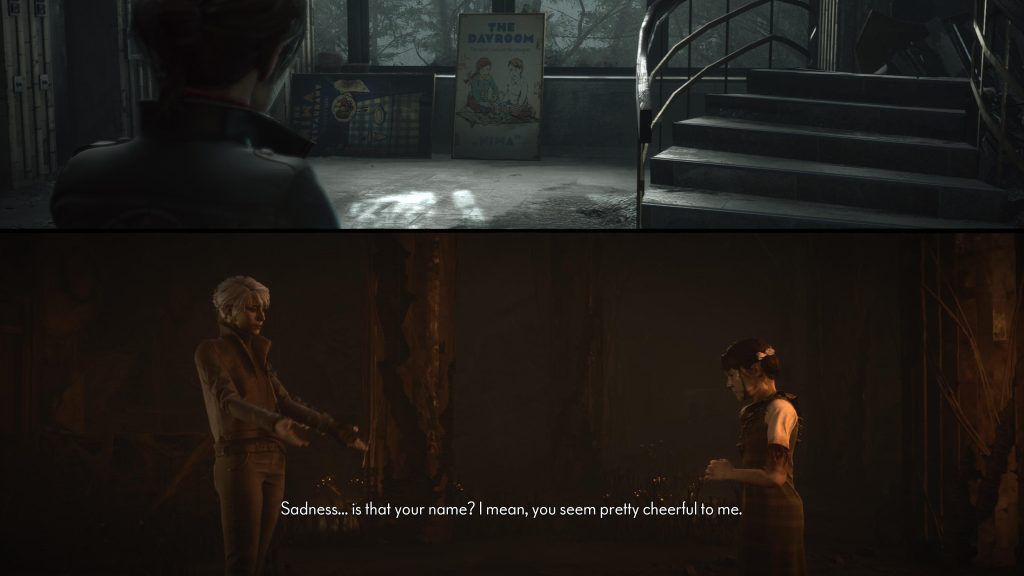 This is a shame as I like my games to have a little more adventure to them, but that’s where the story will either draw you in or not make the journey worth it. For me it was the latter. I found the story to be a mix of predictable and purposefully vague, but without enough hints to create intrigue. It doesn’t help that I found the dialogue, of which there is a lot, to be very forced. It felt written, which it obviously is but the goal is to make it sound natural and real, which The Medium doesn’t. The voice acting itself is fine, it’s just the words that are a problem.

I didn’t really care about the story at all and the ending itself is both weak and sequel baiting. It’s a shame as the lack of challenge with the gameplay could have been excused with a strong narrative but the strongest aspect of The Medium is easily the split world concept and it’s just not used enough. It’s used a lot, but it never goes into real mind bending cause and effect style puzzles, it plays everything very safe. That goes for the horror aspect as well which is present, but subtle and not in any way scary. 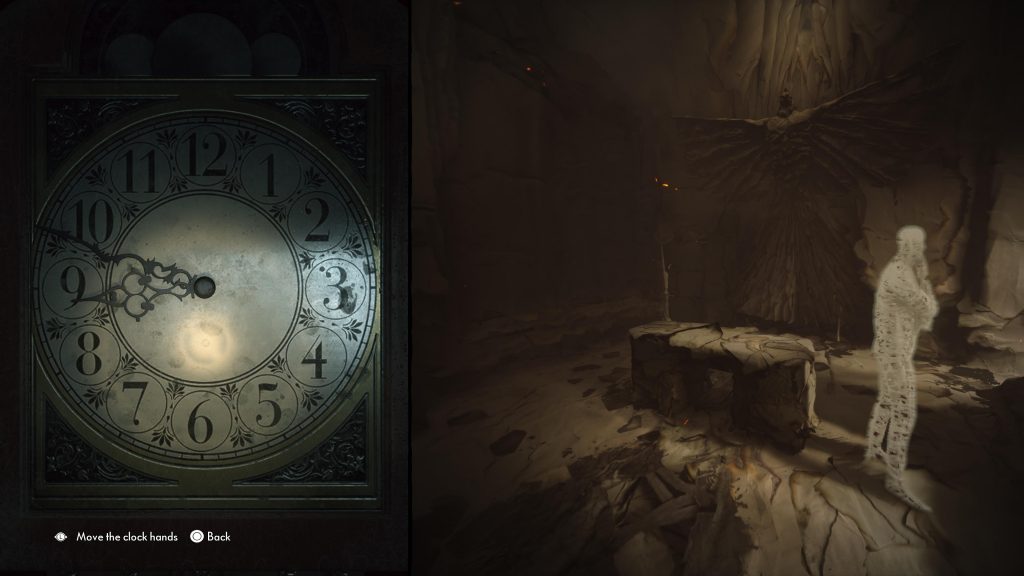 Technically the split screen mechanic is great, effectively modelling two worlds at the same time, and the graphics for the environments are, generally, very detailed though the spirit world is a little uninspired. The characters vary from nicely motion captured to awkwardly animated. It has obviously got a decent budget but, beyond the split screen effect, Sony’s first party output from the last generation looks more impressive. There’s even some old fashioned texture pop in at times thanks to the Unreal Engine.

Pretty much every feature of the DualSense is used, which is nice. No where near as well as Astro’s Playroom but at least they’ve made an effort. The voices of the dead come through the speaker, there is a little resistance on the triggers with certain actions, you can even use the touch pad to rotate items in your inventory and motion controls to move the camera when it focuses in. There is some vibration but it just feels like normal vibration rather than making actions feel more tactile, which could have really enhanced the experience. 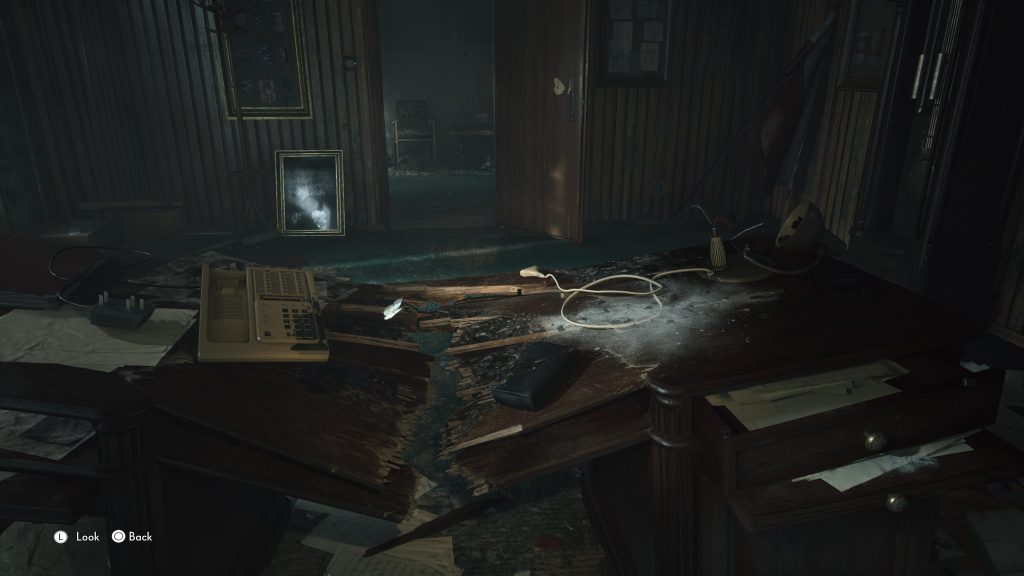 The Medium stumbles. The fact that it’s a fixed camera horror title and has Akira Yamaoka, the composer from Silent Hill, creating some of the music draws comparisons which aren’t really warranted. This is a very straightforward game with a narrative that is anything but, but the delivery is lacking. Go in knowing what type of game it is and being a fan of a more linear experience and you may get more out of it than I did. As it is, it’s more technically competent but doesn’t do it for me the way that Tormented Souls did.

The Medium
6 Overall
Pros
+ The split world is a great concept
+ Detailed environmental visuals
+ Uses all the DualSense features
Cons
- Very linear
- Easy puzzles
- Story is poorly delivered
Summary
The Medium is a linear experience with an interesting if underutilised split dimension mechanic. The story is complex but can also be predictable whilst not providing enough in the way of intrigue. Temper your expectations and you may just get something out of it.