NASA will probably tell you golf and space go hand in hand. Ever since they hoofed balls on the Moon, there’s been a fascination with sport where the gravity simply isn’t there. Golf video games tend to play a lot more with reality and Golf Club: Wasteland is opting for the more familiar surroundings of Earth. Demagog Studio are banking on a golf game with a narrative which largely strikes a decent tone. 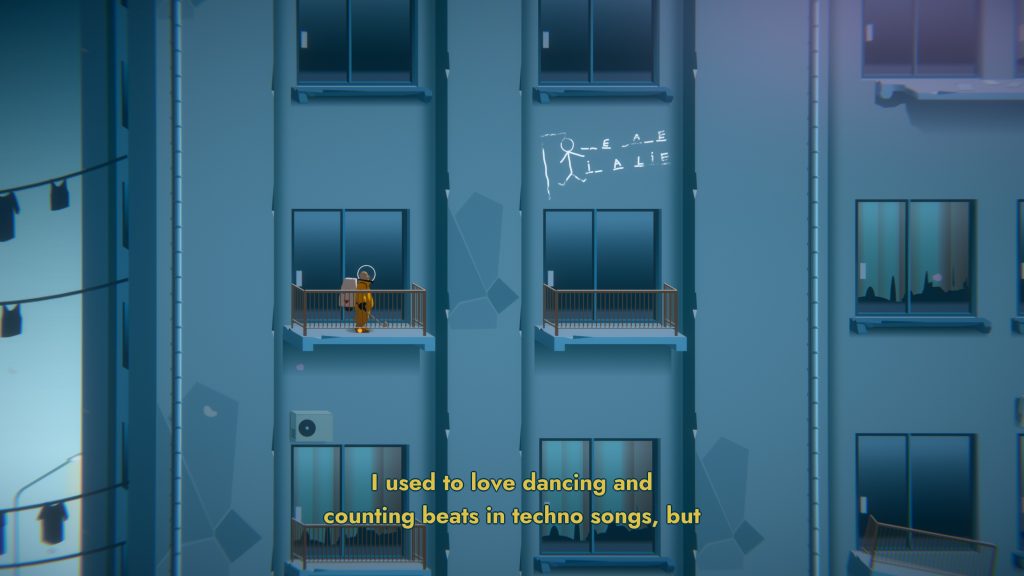 Golf Club: Wasteland takes place on a post-apocalyptic world. You assume the portly body of Charlie, a Mars colonist who misses the old comforts of home. Bored with life on Mars and in a position of disgrace, he takes a rocket back to the third rock and plays some holes. The tale is largely held in the background with Charlie’s particular story revealed once the course is completed. I find that a poor way to unveil a protagonist’s motivations but there’s plenty of other perspectives to mull over.

Accompanying your swings is a soundtrack of radio chatter, listener call-ins and songs that all fit around a nostalgic theme. Turns out there’s a lot of Martian dwellers who miss the green pastures and their old life. The radio show does allow a number of perspectives to be shown and it’s all presented by a very cosy DJ who really fits with the game’s leisurely tone.

The environments tell their own story, too. It’s a little predictable with nature always reclaiming old buildings, sewage run-off spilling into disused locations and mountains of trash. The catastrophe is never explicitly stated but the ruins leave their own mark. You can also uncover diary entries that shed light on the colonist lifestyle and what they left Earth for. It’s not glamorous and the pioneering aspect appears to have long vanished. People yearn for the old days and Golf Club: Wasteland does a great job at conveying it. 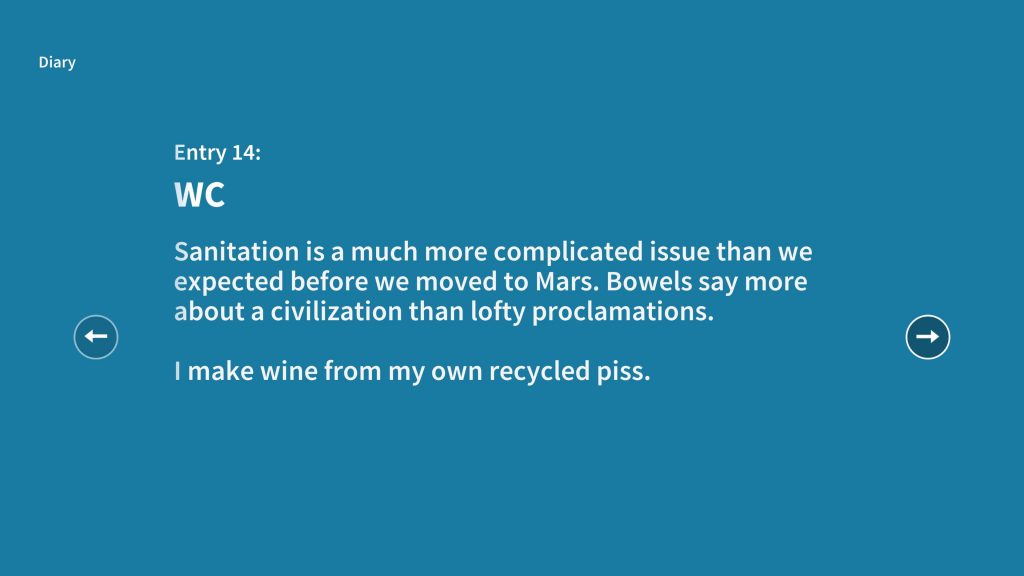 Golf Club: Wasteland‘s course design is fairly diverse and progresses into more complex holes swiftly. The apocalyptic motif is used well to create some courses that make great use of urban decay. You go from hitting balls across skyscraper rooftops to teeing off on a yacht. There’s a nice sense of a journey being undertaken. The obstacles are all very clear and there’s very little tricky on offer to stifle your strokes. There’s no obfuscation at play and, once you know how a hole’s gimmicks work, you’ll be familiar with it for the rest of the course.

How you golf is kept incredibly simple.  With just the one club, our astronaut aims with the left stick. You can pick an angle and strength and then hit X to swing. Your only other consideration is environmental factors. Wind is not usually a concern but there’s water hazards, pesky wildlife and toxic waste that can blot your scorecard.

There’s 35 holes in total and I did find the course to escalate in difficulty. As with real golf which has products that are under $1000, you find the hole regardless but managing the latter ones in a timely manner can bring some frustration. With a lot of hanging platforms, hazards and drops into the abyss, it rewards careful planning. With just an arrow for guidance, dialing in your trajectory can be tricky. There’s not much else to work with but something more complicated would detract from the storytelling. 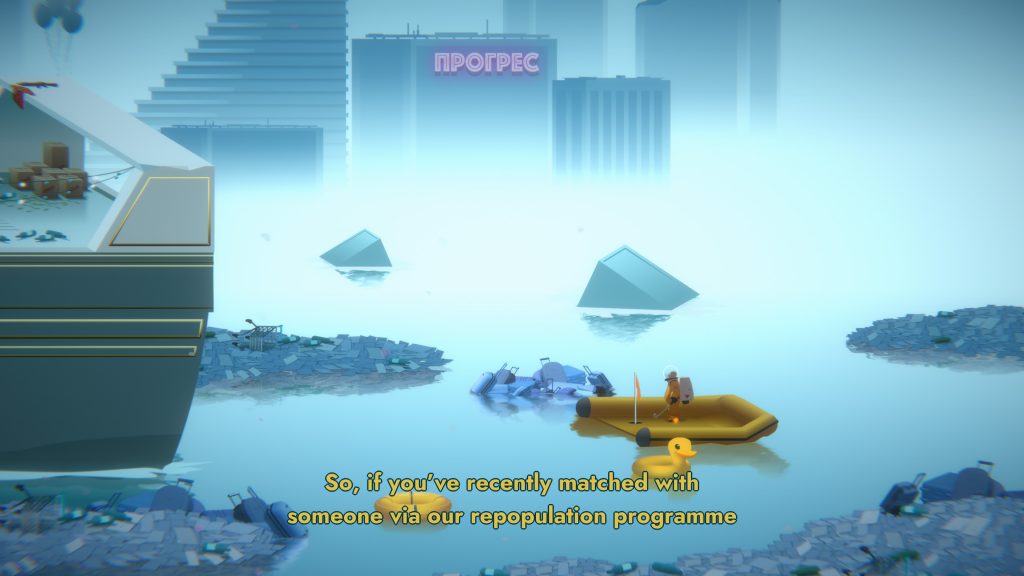 Other than that, the golf is fairly pleasant. You have pars to hit but you’re not really in direct competition or against the clock. It’s just you, the course and the scorecard. If holes are too taxing for you, the option to skip is there. Not that I found many holes to be frustrating. When you start crunching for diary entries, things become a bit more irritating.

Some involve moving parts, switches and a lot tend to favour scaffolding or raised platforms. At times, it feels like a platformer and you can survey the land before striking a ball in anger. It gave me a good chance to see what the best plan of action was and gave me time to think of how to best manage it in as few shots as possible.

It becomes an exercise in execution and can be satisfying when you shortcut your way to a flag. Controls stay fairly reliable, allowing you to concentrate on the shot at hand. That said, undoing a few stroke’s worth of work with an errant shot might as well lead to a restart. You can replay any hole in pursuit of diary entries and lower scores but resetting a hole isn’t as instant as I’d like. There’s a stylish pan up to the menus which can feel laborious on especially troublesome areas. It’s not enough to stop me playing but it does hinder the game’s flow. You do have the option to skip holes but I’ve not been in such a funk to do so.

I do enjoy the look of the world. It’s a lot of concrete and neon and there’s recognisable traces of life. There’s crumbled walls, trash piles and sewage but there’s also moments of character. You find wildlife on some of the holes with some nice autumn foliage and sinking a put can bring further charm to the experience. For a ruined world, it doesn’t look dull or motionless. It feels like a connected world rather than a series of levels and you get to see the remnants of all walks of life. It adds to the story they’re trying to tell and works well. 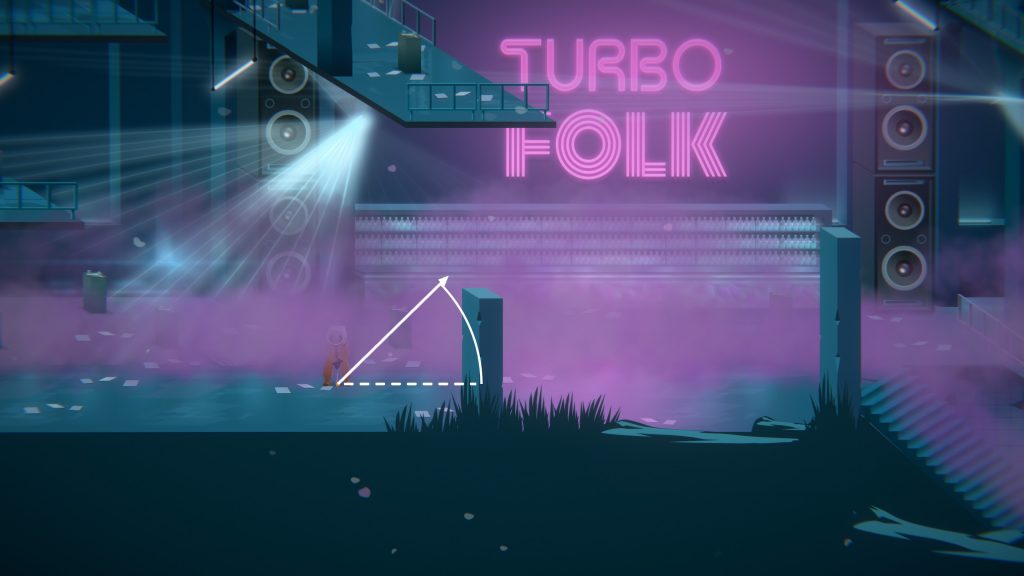 The radio calls are well acted although I did tend to ignore most of it during my first playthrough. Demagog Studio advises headphones in the intro and they definitely help bring some of that world-building to your attention. I’m not that keen on the actual songs but the listener calls do a great job of colouring a world before the catastrophe. Charlie’s a largely silent fellow but his annoyances at just missing a put are admirable.

I do feel Golf Club: Wasteland‘s narrative is primary to the actual golf. Whilst the sport on display is functional and the course design is interesting, I’ve not got a lot else to do with it. I can replay for diary entries but the broad narrative strokes have already been painted. The golf is acceptable but the storytelling is wonderfully achieved.

Golf Club: Wasteland
7 Overall
Pros
+ The golf controls well and is consistent.
+ The story is really well told and the radio chatter is performed nicely.
+ Great course design and makes good use of a ruined world.
+ Relaxed in tone and fairly forgiving.
Cons
- There's not a lot to go back to once you've seen credits.
- Some holes can become really frustrating.
- Some of the radio talk can pass you by when you're focused on the golf.
- Charlie's backstory could've been delivered more up front.
Summary
Golf Club: Wasteland has a nicely executed narrative that is let down a little by withholding too much. The background radio calls do a lot to flesh out a barren, broken Earth and it helps that the golf on offer is decent, if a little simple. When the holes get more complex, frustration can creep in but I feel the penalty for failure is minor enough for people to persevere.