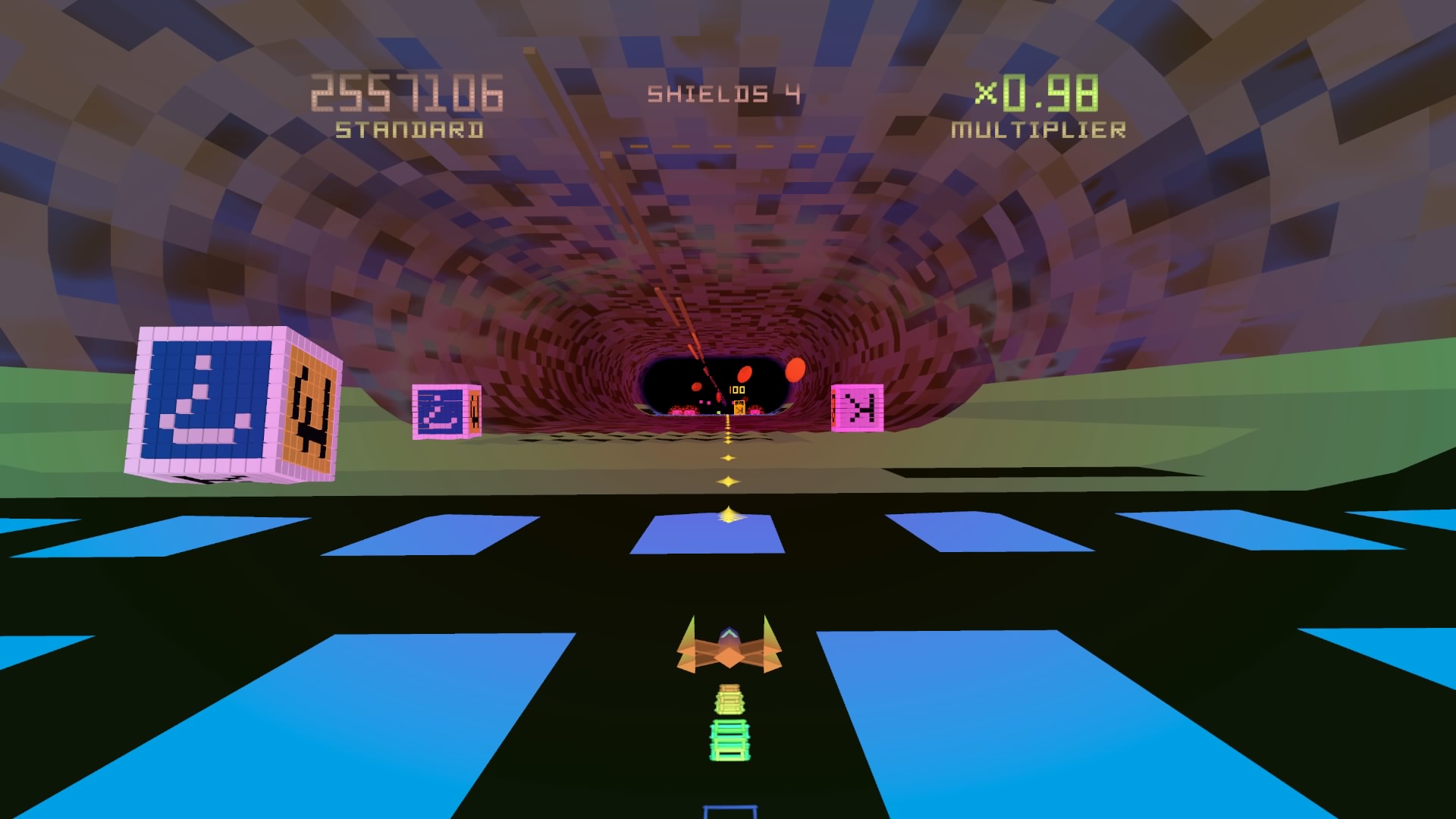 When following the work of legendary coder Jeff Minter, you start to expect certain things.  Intense visuals, the use of 3D/VR technologies, epic soundtracks and retro-inspired gameplay infused with seriously satisfying risk versus reward mechanics and following Minter’s previous PSN work, the excellent TxK, hopes were high for Polybius which is Minter’s first effort for PSVR.

As usual for the veteran developer, this game sees you flying ever onwards into the screen through a technicolour space.  Unlike TxK and Space Giraffe, this game doesn’t riff as much on Tempest but it does involve onward movement through tunneled levels. 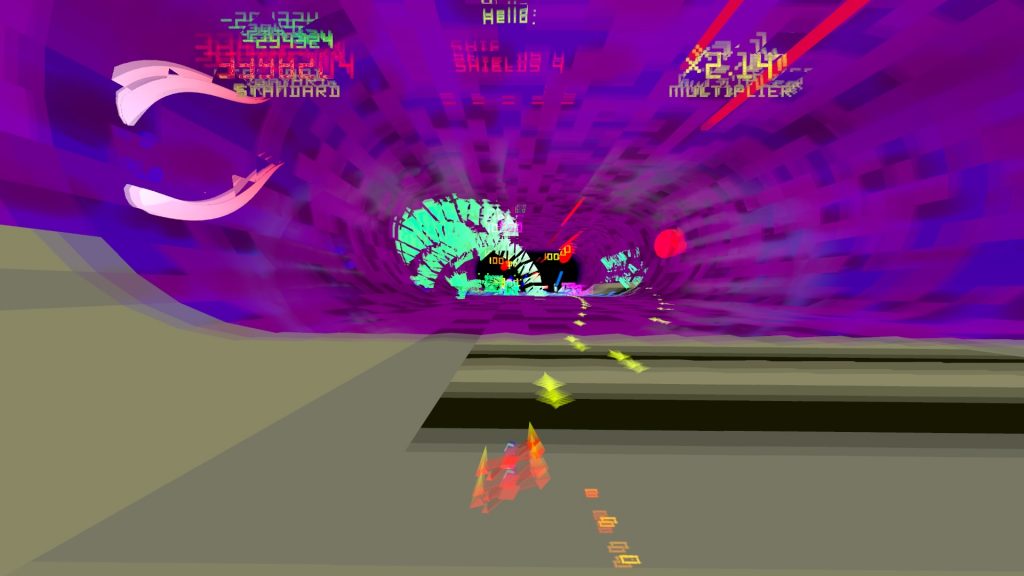 Each level sees you moving forward and shooting things.  There are no other controls or techniques to think about, you just strafe and shoot while Minter flings every available pixel he’s got directly into your eyes.  Some levels are flat planes while others are tubes or curved spaces that you are inside or outside of.  Typically, the screens get more and more creative as you go along but essentially the gameplay stays the same albeit with a couple of new wrinkles occasionally.

The risk/reward element comes from gates that pepper the levels.  Fly through a gate and your score multiplier goes up.  That’s great but your speed also goes up.  Get greedy and you’ll be flying through the game at a pace which may well be beyond your brain’s ability to cope and faster than your weapons can clear the path ahead of you. 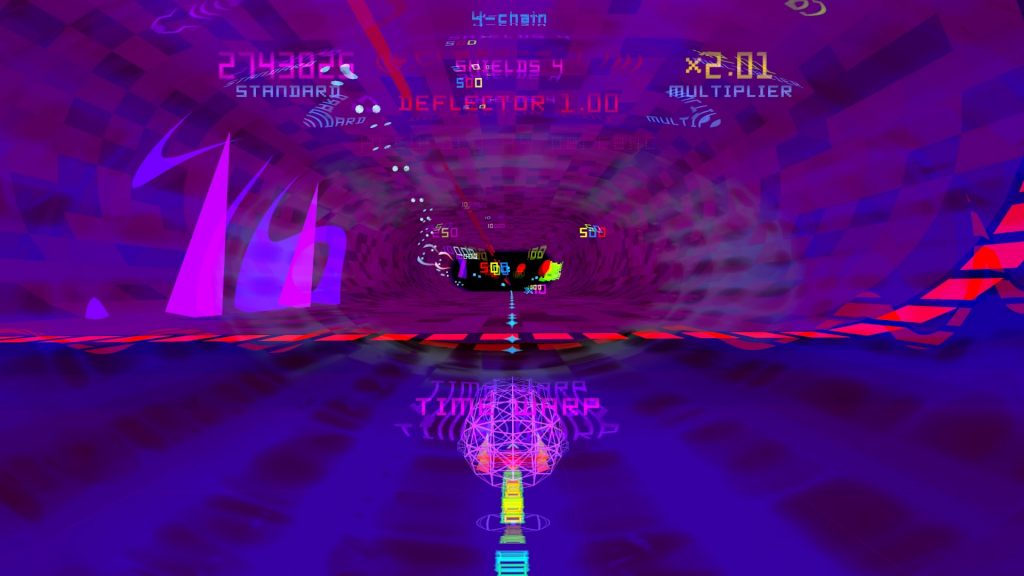 Not that the game explains that.  There are no instructions on offer.  There are bits of text before and during levels but these offer little information and mostly just act as the token bit of Englishness that every Minter game needs.  So initially I just thought the game was a barely playable mess but stay away from the gates and the game is a much more measured affair even if you you won’t be troubling any leaderboards.  The choice is up to you and I do like the fact that the game lets you set your own level in this way.

As you get used to the pace of the game, it starts to become more enjoyable for sure and retro gamers will appreciate Minter’s almost Matthew Smith-esque creativity (that’s the guy who created the ZX Spectrum platformers Manic Miner and Jet Set Willy, two games that give little to no fucks about being sensible).  The game does take you on a journey and it introduces new obstacles that will add new challenges.  Some levels will strip you of all your shields (which are essentially your lives) pretty quickly until you realise what it wants from you but luckily the game lets you restart from the last level you unlocked.  You can also play ‘Pure’ mode which makes you start from the first level and ‘YOLO’ which makes things a lot harder by not allowing you to regain your shields. 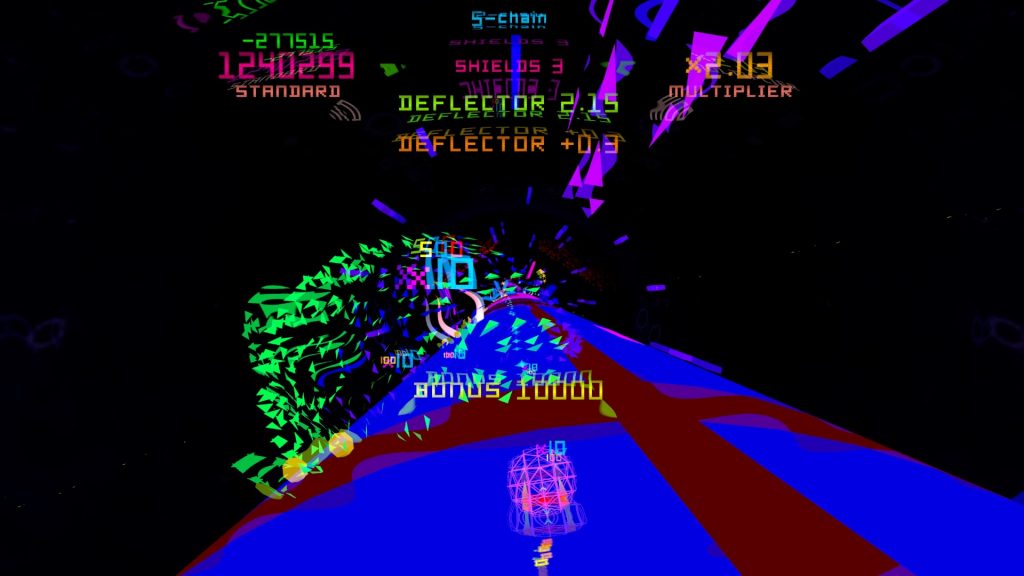 The sad truth is that while it’s okay, I’m just not loving Polybius like I did with TxK and Space Giraffe.  The gameplay isn’t really doing enough and if you could strip out the mad colours and 3D effects, you’d be left with a very ordinary shooter.   That’s not to say this isn’t good. When you get into the zone and start making good progress, it hints at the brilliance that Jeff Minter is capable of.  The game can be fun and exciting at times but more often than not I was just thinking ‘is this it?’

The let down also extends to the presentation.  Yes, it’s fast and colourful but the solid shapes that are coming at you are pretty basic. Instead of Minter’s usual vector graphic stylings, now we’ve got something that looks more like the old Atari game S.T.U.N. Runner but messier.  There’s so much going on that it can be hard to really decode it all as it shreds your retinas. In or out of VR, there’s nothing special about the visuals beyond the speed and the VR doesn’t add as much as you’d expect.  It does however make the game a little easier but beyond that it doesn’t really live up to the sense of excitement you get when the game initially stops you in your tracks to explain how it is basically going to kill you if you have epilepsy. 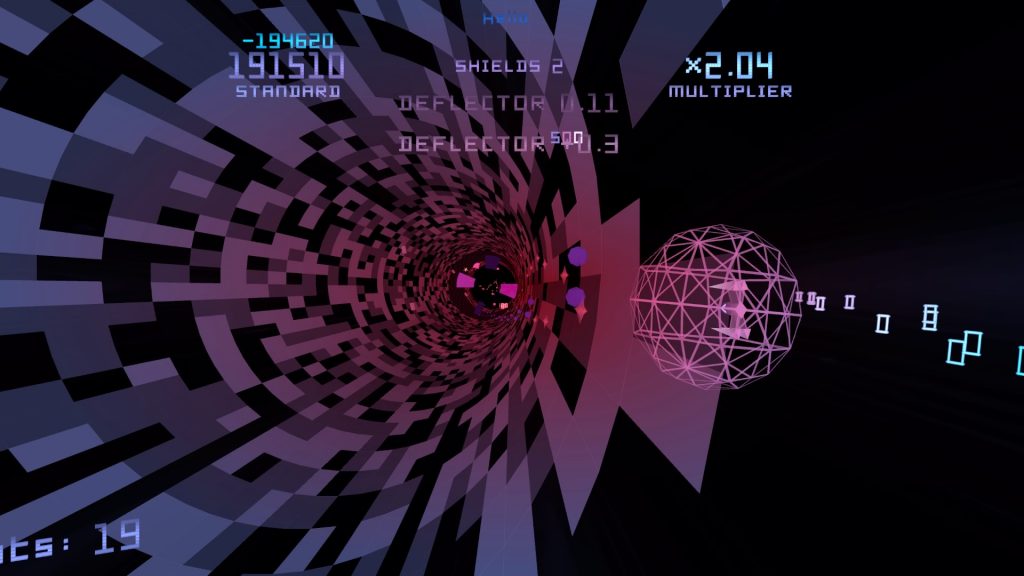 The typically bombastic electronic soundtrack also didn’t hit with me.  Between that and all the sound effects, the effect is quite messy.  I played around with the volume settings a fair bit to attempt to find a decent level but in the end I was never really happy.  I wasn’t picking up on any Space Giraffe-esque sonic cues and there were no ‘space is everything’ cool moments like you got in TxK.

But I’m fully prepared to accept that this may well be another gamer’s classic.  Sure, I’m underwhelmed and would much rather Atari stopped being pricks and would just let Minter unleash TxK onto PSVR but Polybius is currently doing very well in the reviews.  So, maybe it’s just me and this game might end up being the classic you’re hoping it is.  But from where I’m sitting this is a bit of a mess and just too simplistic compared to my favourite Llamasoft games.