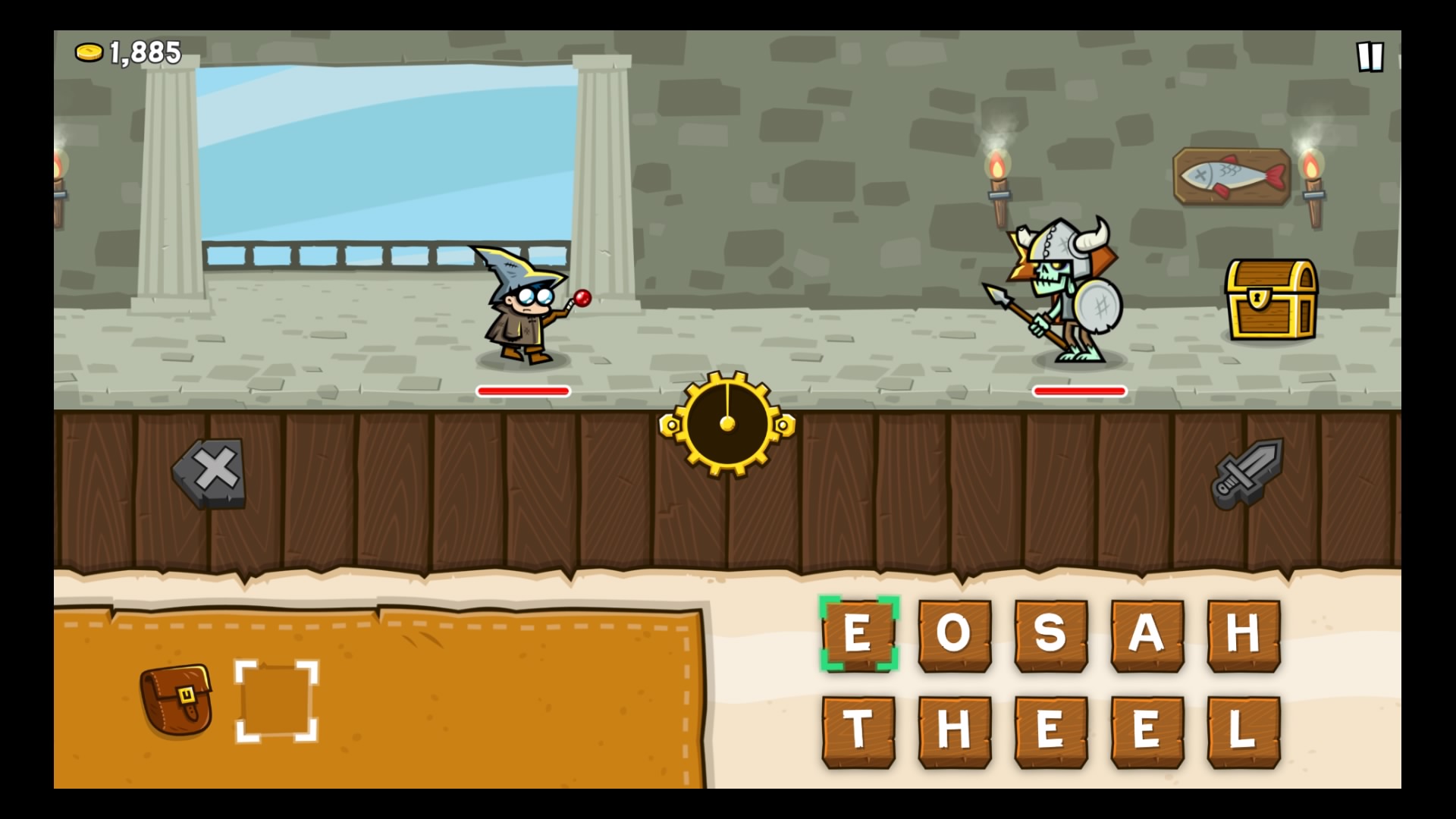 Spellspire is the latest effort from our friends 10ton, the little dev team behind Tennis in the Face and Neon Chrome, and this sticks to their mainly casual roots by offering us a word game like those fun word games to play with friends – in a casual RGP skin – that has already had a showing on iOS.  And like many of 10ton’s recent games, this combines some fairly simple gameplay rules with an upgrading mechanic.

The game has you playing as a wizard who is making his way up a tower.  Each floor is patrolled by monsters who you take on one at a time and you damage them by spelling words using a selection of ten letters.  The longer the word, the more damage you do.  You can’t repeat words on a floor so there’s the potential for some strategy as you could save your biggest words for the bigger enemies.

Beyond the Scrabble-esque anagram gameplay, there’s not much else to Spellspire‘s basic mechanics.  Occasionally a boss turns up or a floor will be slightly more crowded than usual but pretty much it’s about selecting words as quickly as possible, buy yourself good monitor arms for playing this game. 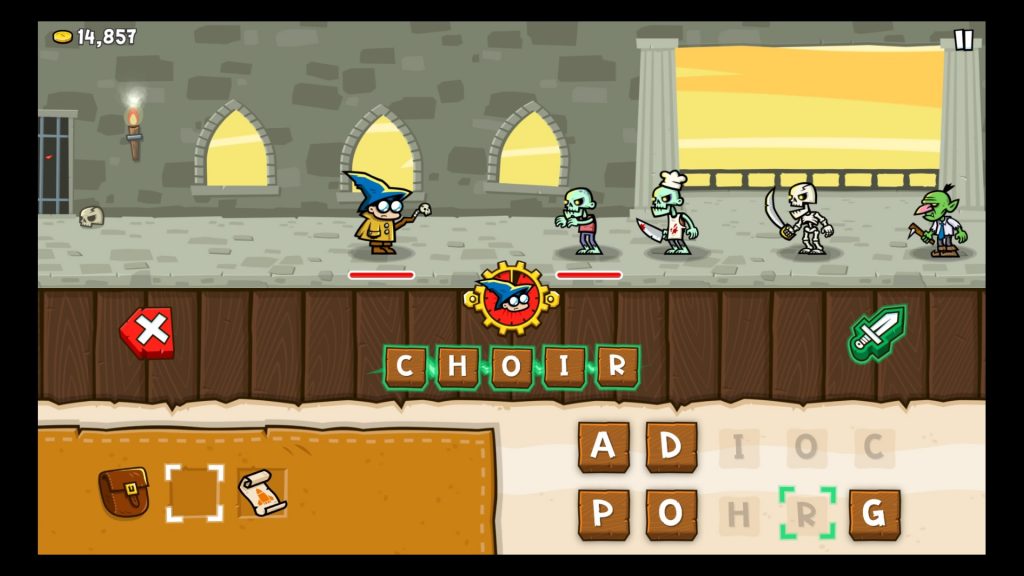 As you plough through the defending army ahead of you, you’ll earn money.   This, along with just reaching certain floors or replaying them for stars that you can spend, will unlock new gear.  Weapons can be bought and upgraded and will add more bite to your attacks as well as burning, freezing and poisoning effects while hats and capes will add to your defence.  This works quite well and it’s quite nice to check out a new wand now and again but this doesn’t really add much to the gameplay because the enemies increase at roughly the rate that you get new gear so really the difficult just feels fairly level all the time.  Occasionally a level will kick your arse but by then you’ll have enough money to add a little something to your stats.

While the core gameplay, and the upgrading to some degree, is enjoyable enough Spellspire feels very repetitive.  There are so many levels and a requirement to play them all twice, and they all feel very similar.  And most of my rounds went a bit like this:  find a long word, break it down, use all the words you can that rhyme with it, find a new word, find more rhymes.  A typical level might look like this:  shovels, shoves, shove, shaves, shave, have, save, saves etc etc. 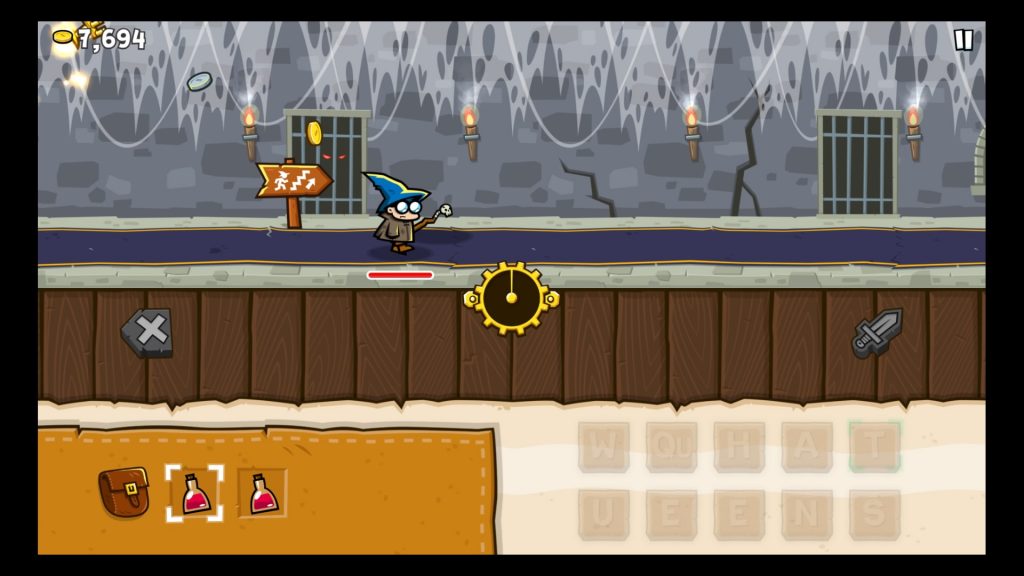 Letter Quest Remastered had a very similar set up too but the difficulty was a tad higher and made for a better game where as I’m just ploughing through Spellspire until I hit a wall and then go back to earn some stars and cash to get myself powerful enough to still compete.  Also, Spellspire gives you less letters to work with which means it descends into the pattern above far too easily.

That said, it is very playable and it’s quite nice to go back to a level that has troubled you and just wreck it with your new burning wand.  The controls are straightforward and don’t get in the way while the visuals are clean and relatively cute.  There’s not much variation to be seen unfortunatley but at least you can always see the letters. 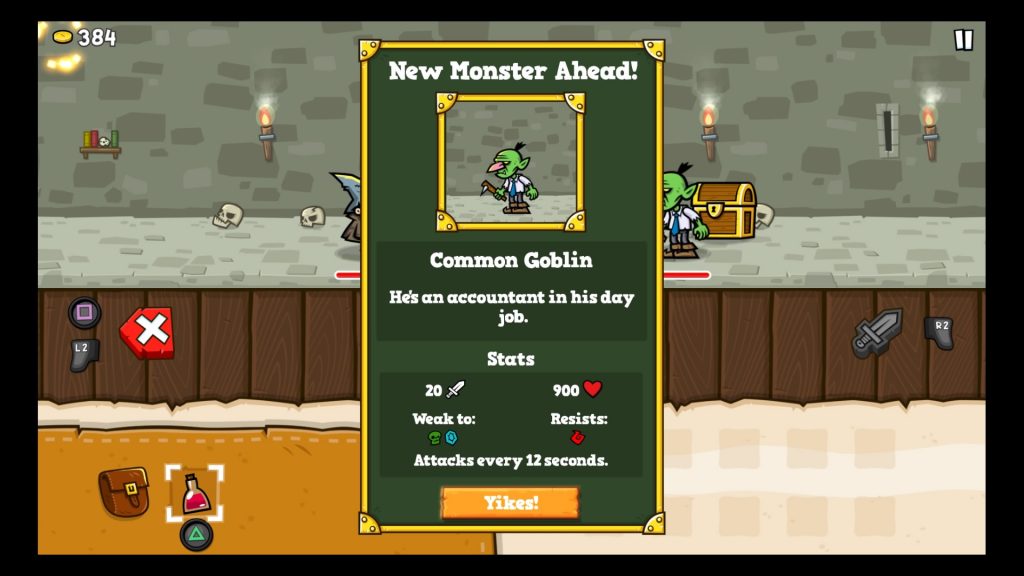 A handful of powerups  appear along the way also.  These can be deployed when ever you need a little attack boost, further negating the difficulty incline.

I’m not sure what Spellspire could do any differently to up its score, maybe this type of mobile game doesn’t really belong on the PS4 (it is a bit more at home on the Vita though) but if you do fancy it then  Letter Quest should probably be your first port of call but if you like that and want more then Spellspire doesn’t entirely disappoint.

Spellspire
5 Overall
Pros
+ Simple to grasp word-based gameplay
+ Upgrading mechanics are decent
Cons
- Gets repetitive quickly
- Lacks difficulty
- SImple look and feel
Summary
Spellspire takes the core gameplay of Letter Quest but doesn't build on it. Everything is fine here but it's repetitive and lacks a real challenge for large chunks of time. But word game fans will likely enjoy it just fine.