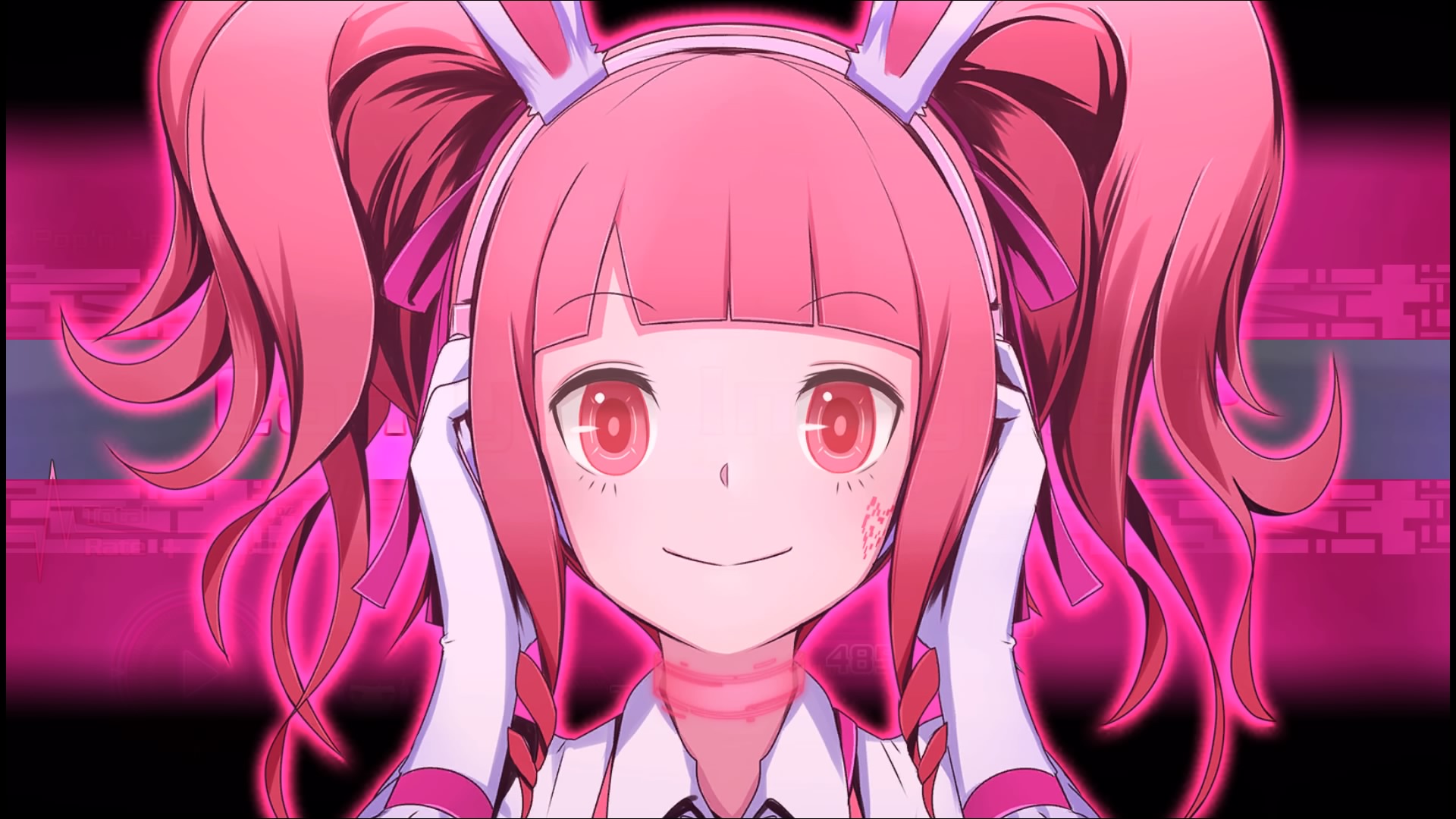 I reviewed Abika’s Trip: Undead & Undressed over two years ago and now we have a follow up in Akiba’s Beat on the PS4. Fans of the last title will want to read on as almost every aspect of the game has changed. 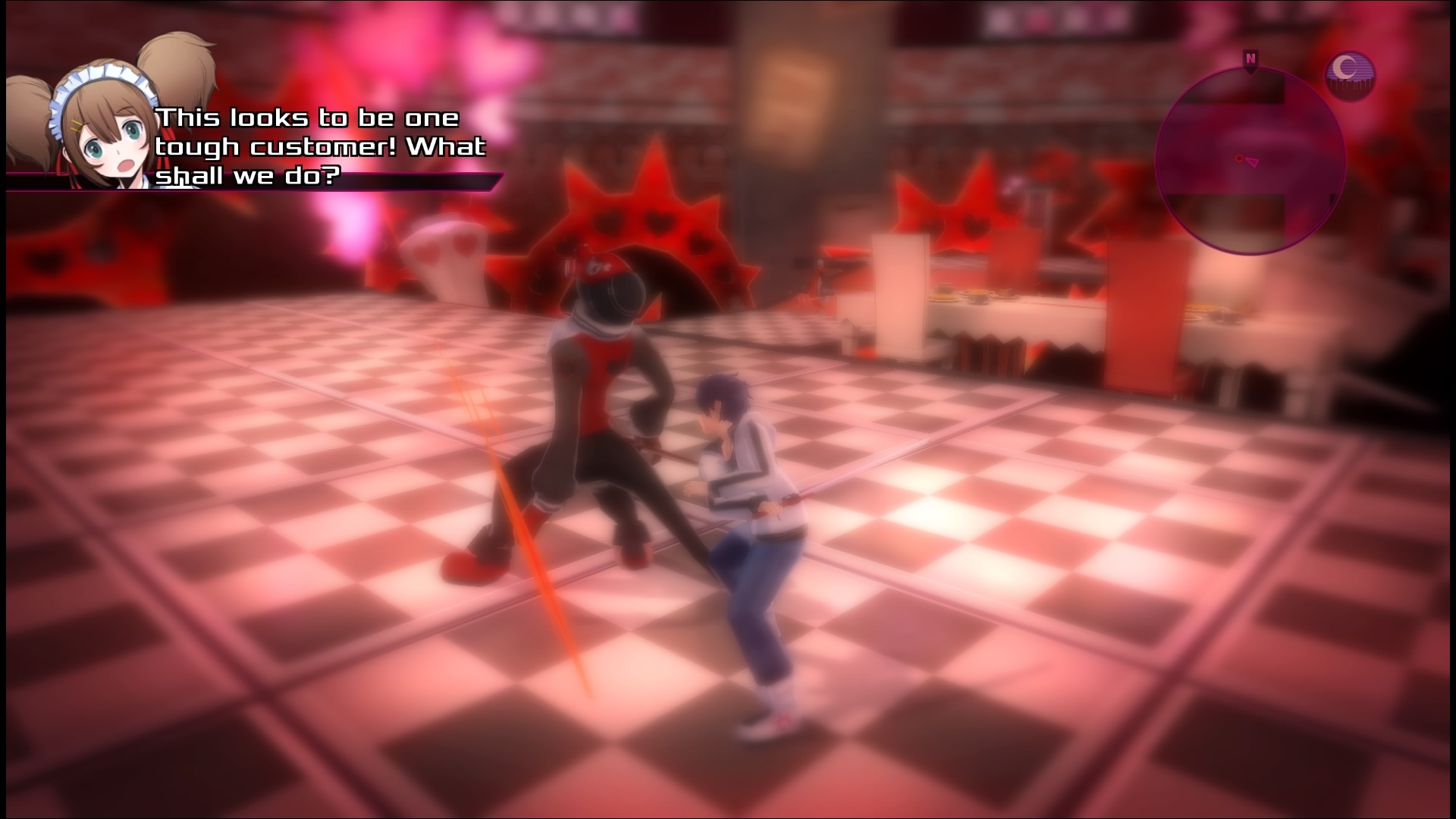 You play as Asahi Tachibana, a self-proclaimed NEET living in Akihabara (Akiba for short). I had to look it up, but a NEET is a person who is ‘not in education, employment or training’. Asahi is happy doing nothing but sleeping, reading manga or watching anime all day, everyday, despite his friend Mizuki’s insistence that he become an adult. One day on his way to meet Mizuki he bumps into a girl named Saki in front of a delusion. Saki informs Asahi that she is a chosen one that has to destroy these delusions before they overtake Akiba. Akihabara is particularly susceptible to delusions, which are when people’s desires start to encroach on reality. Most people don’t notice the delusions but as Asahi can he gets dragged along against his will by Saki and so his adventure begins.

It’s an interesting premise, though it is quite reminiscent of Persona 4 and the more recent 5. People’s desires become JRPG style dungeons, early examples of which are an audio based delusion (someone misses how Akiba used to be an audiophile’s paradise) and an idol based one (a girl wishes to become an popular idol). Outside of the dungeons you have an accurate recreation of Akiba (I’ve never been but I believe it) which is primarily just used as a backdrop for story advancement. There are shops to buy equipment but beyond that there isn’t much else to interact with.

The dungeons themselves are split into areas which all comprise of walkways floating in mid air. There are no walls so you can usually see where you need to head and it’s just a matter of following the path there. Sometimes there will be switches to pull or teleporters but generally speaking you’ll just be following a winding path to the next doorway which will load the next zone, with a guide that won’t shut up. Enemies populate the zones and patrol specific areas. If you attack the enemy then battle starts with them receiving damage, if you get caught from behind then you take damage otherwise battle just starts as normal. 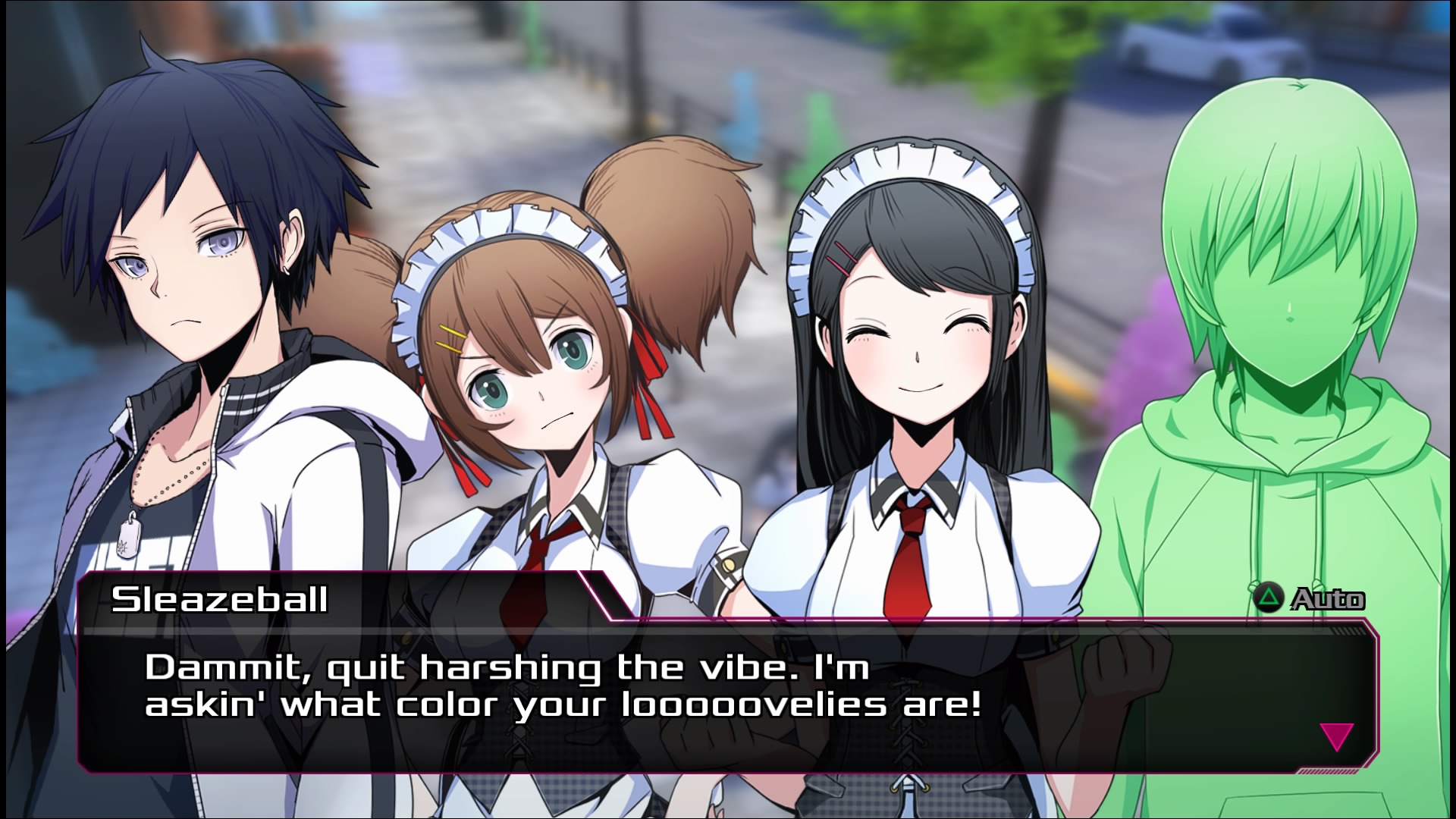 Battles load in a separate arena area and the battle system is much like the Tales of series of games and the stripping mechanic of the last game is replaced with a regular battle. You are locked to a 2D plane but can move freely if you desire. Basic attacks are combo-ed together with the square button and can be varied by pressing different directions on the left analogue stick. Special moves which require SP can be assigned to variations of the cross button and the left analogue stick and different directions on the right analogue stick allowing for eight moves altogether. All attacks require AP which is basically stamina, but represented in number form. Each attack costs one, once you hit zero you can’t attack until your AP refills again after a couple of seconds.

Early on you do a combo, back off or block whilst your AP comes back before going to town again but as you progress better gear gives you more AP which makes it less of an issue, though more of an annoyance than an interesting game mechanic. As you attack a super meter fills called the Imagine Gauge. Once completely full you can initiate an Imagine Field which plays your selected music track and gives you unlimited AP for the duration of the song. This is the ‘Beat’ part of Akiba’s Beat as the visuals get all music themed though there is no actual interaction with the music or rhythm based gameplay.

Each dungeon is made of multiple areas and ends in a boss encounter. These can be a battle of endurance as they have huge amounts of HP that can take multiple minutes of tapping the square button to take down. The Imagine Field becomes a necessity here as it increases your stats as the song continues but they can still last a long time and don’t require much in the way of tactics or skill. Your AI team mates can be given guidelines as to how to perform, from healing to who to attack or when to use a specific item so don’t require too much babysitting though you can control any character you wish. 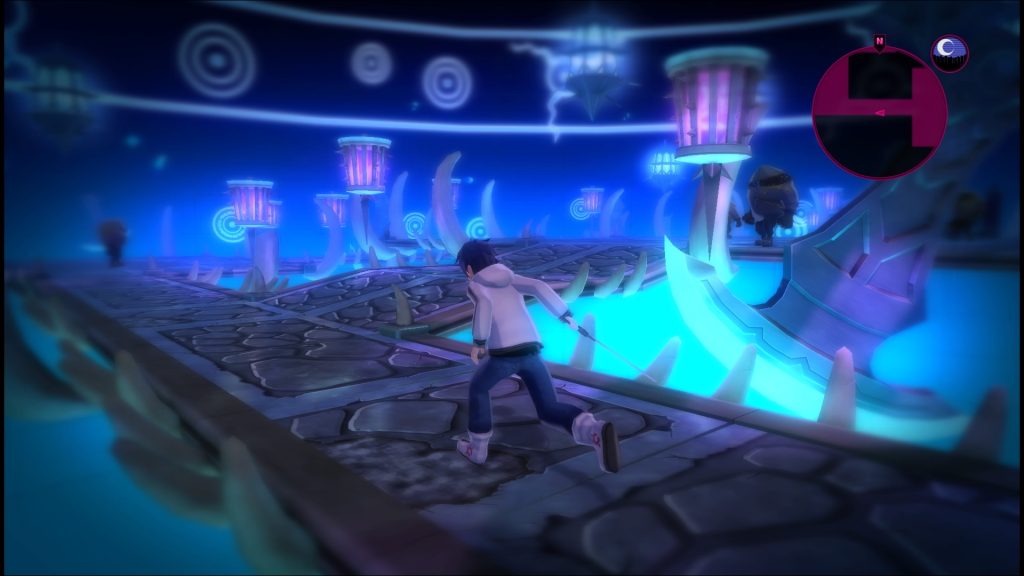 Other than the dungeons all you really have is story elements. As a day starts a bit of story will be delivered, usually through dialogue between the characters. Then when you’re given control there will be an objective marker placed on the map, travel there and more story will play out, which might lead to another marker, and another, before finally you’ll need to head into a dungeon (which might involve some cutscenes too). You can fast travel to set locations and you’ll want to as Akiba is split into small sections which require a longer than you’d expect load to get between. Add to that the running speed which could be a bit faster and you’ll be reaching for the fast travel time and time again.

It’s a shame as as I said earlier Akihabara has been recreated in detail so you’d think it would be fun just being a virtual tourist but you end up blanking most of it. It’s not even as full of life as Akiba’s Trip as instead of the hustle and bustle of crowds, with trailers for upcoming games in the background all you get here is some generic music. Also, instead of actual character models moving around the streets you just have some stationary character models all in one block of bright colour. You could say it was a design choice but it just kills the illusion of a real place, and when there are characters in the cutscenes with portraits that just looks like a giant Jelly Baby then it comes across as lazy. 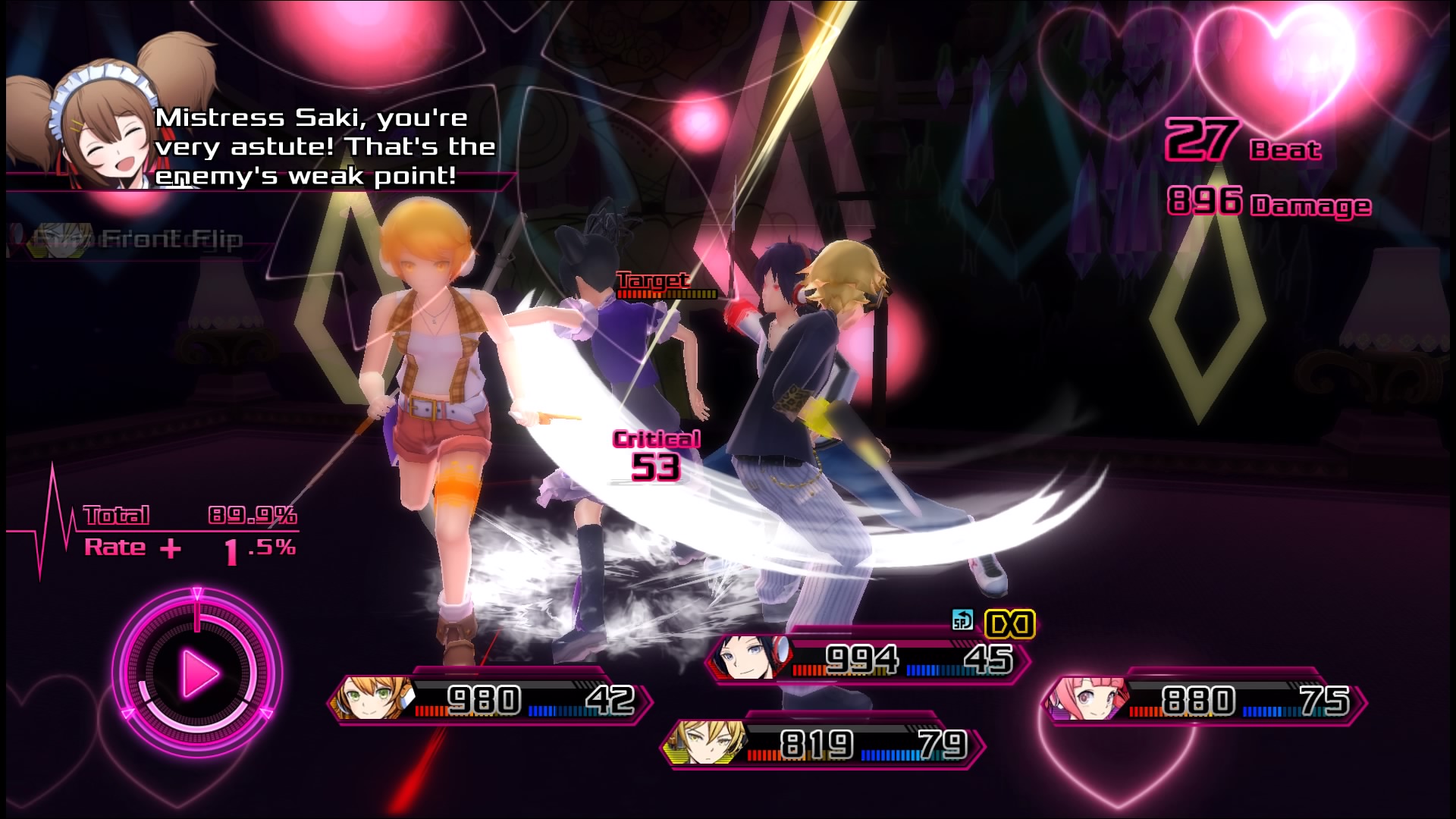 You could stretch that to the enemy design too. Each dungeon has their own enemies but in reality all they are are the same ten enemy designs over and over but with a different colour or texture on them. You could say the same about the dungeons themselves I guess as they are always a pathway floating in the middle of nowhere with just a different background and different props floating around. It makes what is an already less than engaging experience, well, boring. There’s little challenge, at least on the default difficulty, and there’s nothing interesting about the dungeon navigation so it just becomes a game of progression with little in the way of highlights. Add to that the game’s insistence on asking you to revisit dungeons over and over and it just feels like padding out what little content that has been created.

There isn’t even any dialogue choices like in Akiba’s Trip so all the story sections just play out themselves. I wasn’t a massive fan of the characters in the last game but at least I had some input, here I’m just an observer to characters I don’t like. As you progress there are side missions which flesh them out but again, these are generally just conversations, followed by moving to another area for another conversation, then moving on again. When you get further into the game there is a battle arena but in a game where I actually avoided fights (unusual for me as I normally would rather the experience) that isn’t a fun activity.

There is also a mission element where you can accept missions from a character which involve going to a previously cleared dungeon to kill a set number of a specific enemy but even this is drawn out as much as possible as you’re only given one mission per dungeon at a time and then when you complete that one and hand it in they will give you another one for that dungeon. Just give me all the same dungeon related ones at once, don’t make me accept a mission, go to the area, find and kill the enemies, leave the area, turn in the mission to then send me back to the same place. It shows a lack of respect for the player’s time. 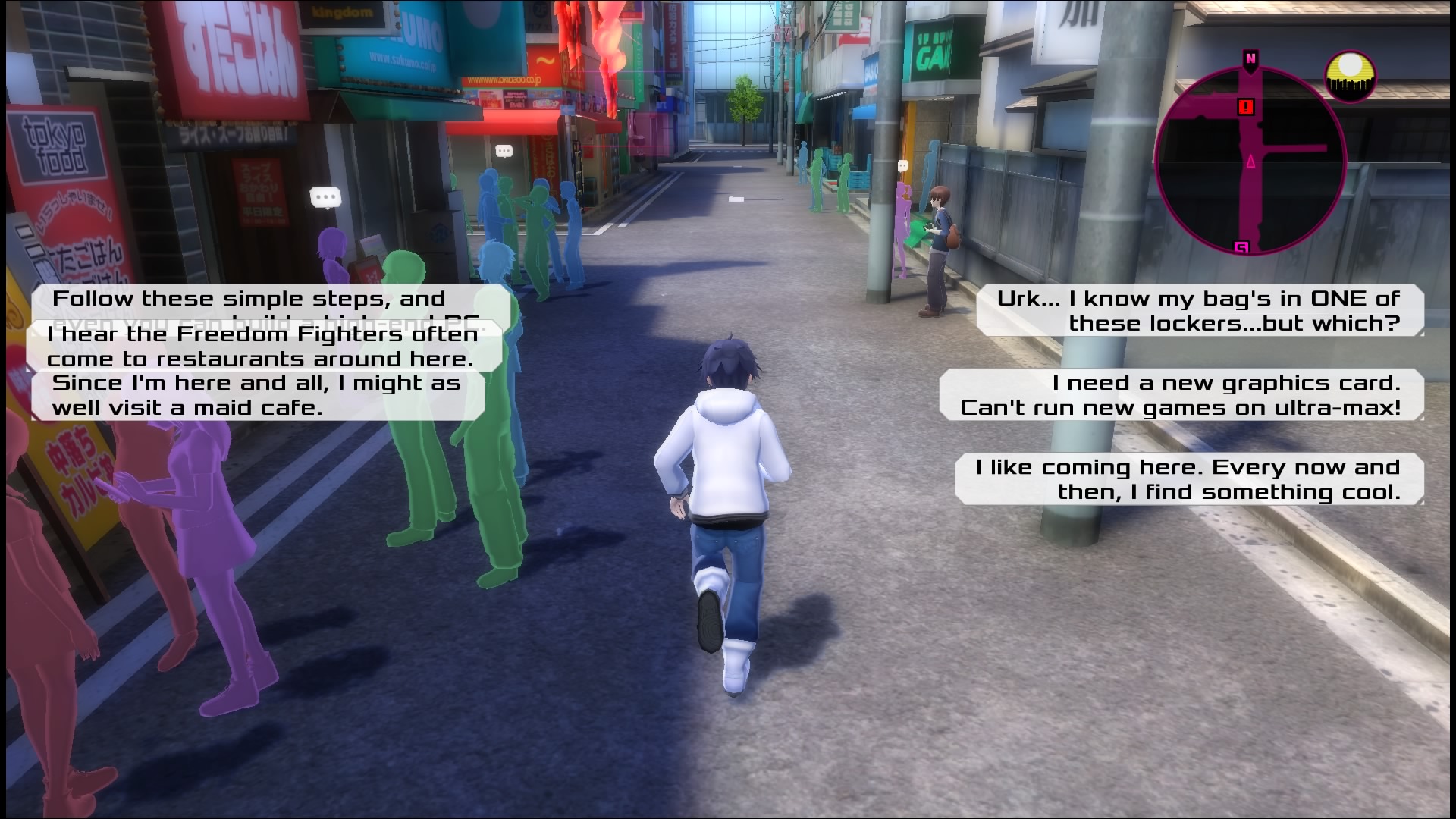 Speaking of time, I completed Akiba’s Beat at around fifty hours. If you do more side stuff (which is weighted more to the tail end of the game) that may be more, if you skip all the dialogue and cutscenes I’m sure it would be significantly less. Akiba’s Trip was far shorter and although it had its problems it was a fun, throw away experience. Akiba’s Beat outlives its welcome long before the credits roll and could have been far better if it was tighter. Some people may gain some enjoyment out of it if they’re just looking for content but releasing so close to Persona 5 the difference is night and day.

Akiba's Beat
4 Overall
Pros
+ A faithful recreation of Akiba
+ A long game
Cons
- All content is stretched to breaking point
- Not a whole lot of interactivity
- Akiba doesn't feel alive
- Characters won't stop talking, ever
Summary
Akiba's Beat is a disappointing follow up to what was a flawed but entertaining game. The majority of gameplay involves walking to a location to button through some dialogue or progressing through tedious and repetitious dungeons. What content is here is stretched to breaking point as you're asked to do the same thing over and over. If you enjoyed the characters from the last game you may find some joy here but others may struggle through the fifty hour playtime.