One Escape is the latest from Ratalaika Games by way of dev Bug Studio in which you have to, yes, escape. Playing as one of three accomplices who’ve robbed a bank, they find themselves in the slammer.

This sets up twenty discrete levels for each of the three characters, Dook the duck, Gor the gorilla and Hog the… yup, warthog, They all begin by gently easing you in and, as is the norm for a Ratalaika release, showering you with trophies almost from the outset. 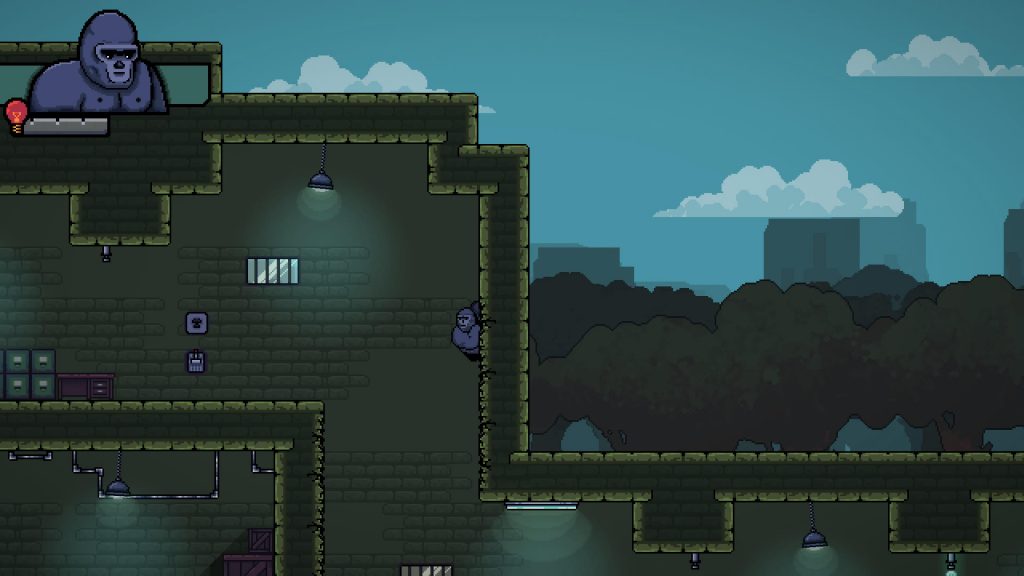 Dook has no particular power that we can discern, but does a fine line in being pissed off. He’s able to get through narrow vents, but that’s pretty much it. Gor can climb up walls and Hog has the ability to punch out guards as well as break walls. This combination of abilities would do well if you could have missions where you could switch between all three as you needed to, breaking out Tango & Cash style.

Sadly, the more prosaic reality is a set of twenty levels for each with no interaction between the three of them. It feels like a real missed opportunity, even if they just tagged one another at the end of a stage, relay style. 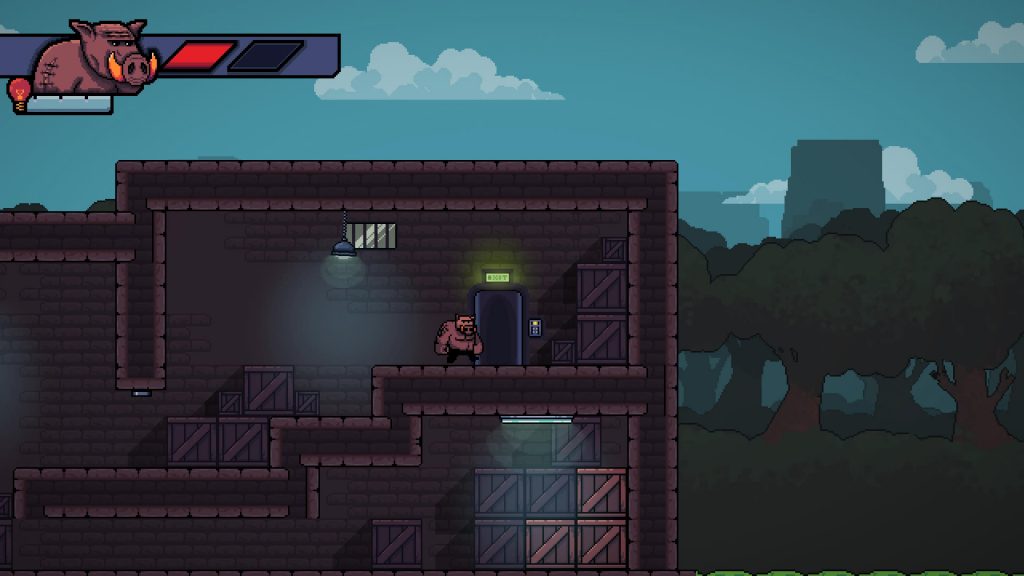 Dook is probably the least interesting of the bunch in terms of his abilities, but he’s part of the gang anyway. For reasons we’re not entirely sure of, you can grab wads of cash scattered around the prison. Without analysing who’s being so careless with their money, as you progress they end up being off the beaten track. Collect three of them though and you’ll have unlocked both trophies relating to this collectible.

Gor’s climbing and traversal is fun enough, his agility being key to progressing through his levels. Hog is also entertaining in terms of his pugilistic tendencies, though you have to get your attack right lest you get taken down by one of the robot guards. 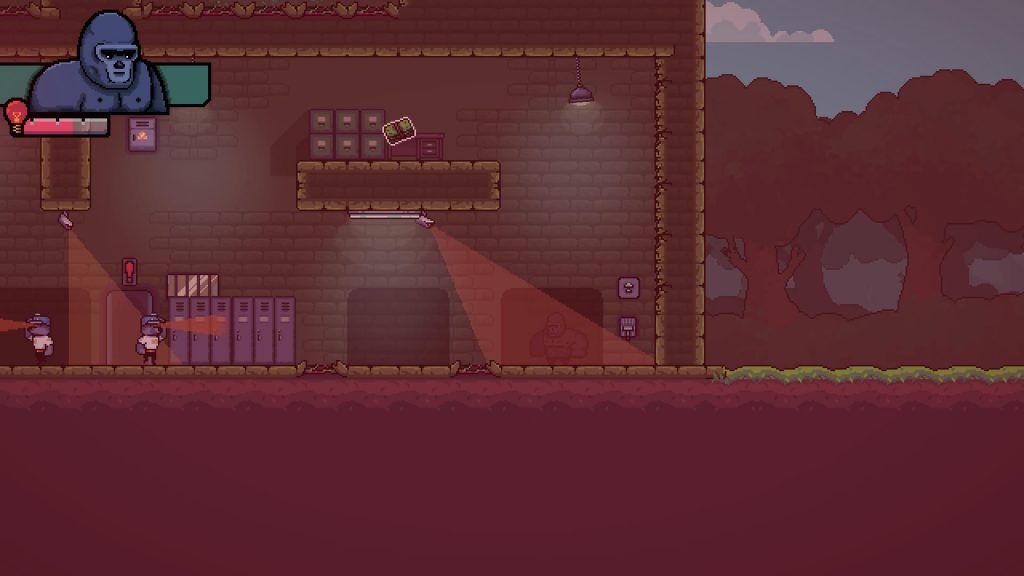 There’s security devices and environmental hazards aplenty, and it’s down to you to get past them without getting zapped, fried, burned or vapourised. Not to mention the security cameras that you have to avoid the gimlet gaze of. Though in the inevitable event you’re spotted all is not necessarily lost. A quick tap of

will drop you into the shadows until the alarms subside and the guards go back to their closet.

It’s all quite fun, but then as it’s really getting into its stride, One Escape has shot its bolt. It’s cursed by the sheer fact it’s published by Ratalaika. We get it, easy trophies are their thing. But when you’ve potentially left half of the game’s levels unplayed, we have to wonder what might’ve been. The fun Freddy Spaghetti had a trophy for each and every level so you had to go right to the end if you wanted a platinum. That was published by Ratalaika too, so getting a platinum prematurely isn’t strictly necessary. 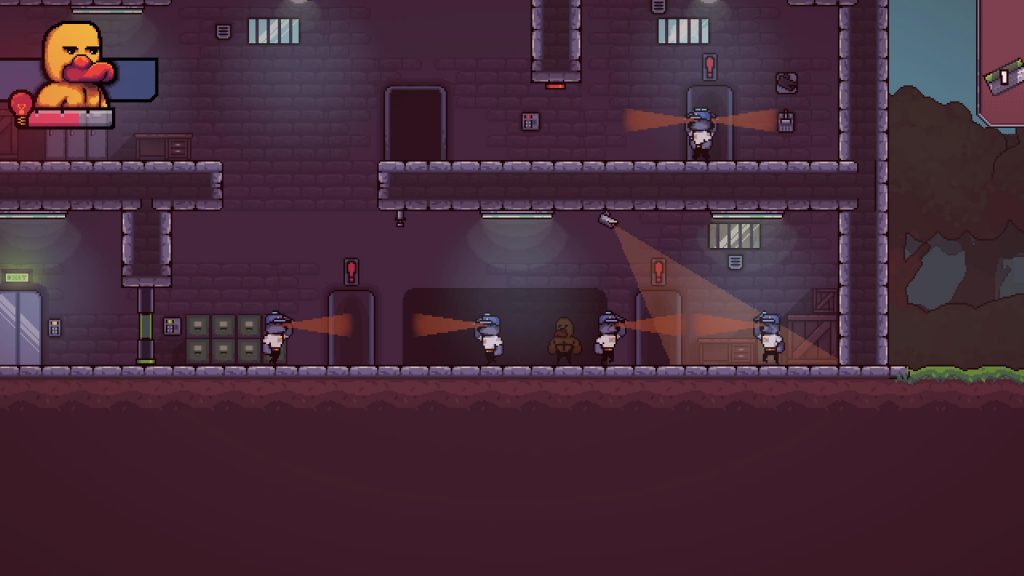 Why not make the trophy for five levels be when you’ve got to ten? And the same with the ten levels trophy, make that level twenty. It’s not like One Escape is hugely long to start with. The tenth levels were wilfully made that bit longer and circuitous to make it feel like the trophy was worth something, but instead it made them feel a bit of a chore.

One Escape is fun and all, but once again falls into the trap of losing all momentum by giving up its platinum yield far too quickly. Same old Rata then. It’s no surprise that many casual gamers won’t persevere beyond the tenth level, it’s only the fact we’re reviewing this that made us go a little further.

In conclusion, One Escape is a fun puzzle platformer but feels like a missed opportunity in terms of its lack of integration across the three protagonists discrete levels. Coupled with the easy platinum, this is destined to be yet another Ratalaika one and done for the bulk of players. But it’s better than that. Try to persevere, it’s worth it.

Cons
- No linking of campaigns seems a missed opportunity
- Some levels are overlong for the sake of it
- Typical easy platinum trophy, it needn't be this way
Summary
One Escape is a fun puzzle platformer let down by a severe case of premature trophy unlocking. Sadly many players won't carry on past 50% by sheer virtue of this fact.