SturmFront is a top down, twin-stick shooter from German developers Andrade Games and while this genre is heavily represented on PSN, this game more so than many others feels like a direct homage to some of the ’80s arcade titles that popularised this style of game.

You play as Siegfried von Hammerstein, a long-haired cyborg who has to take on a substantial mutant threat using his rifle and flamethrower.  In his way are various types of mutants that will either shoot him or attack physically as well as generator nests and, of course, some intimidating bosses.  The controls are your standard left stick to move, right stick to aim kind of affair while R2 is used to shoot.  The face buttons are also used, inexplicably, for shooting but this can be entirely ignored. 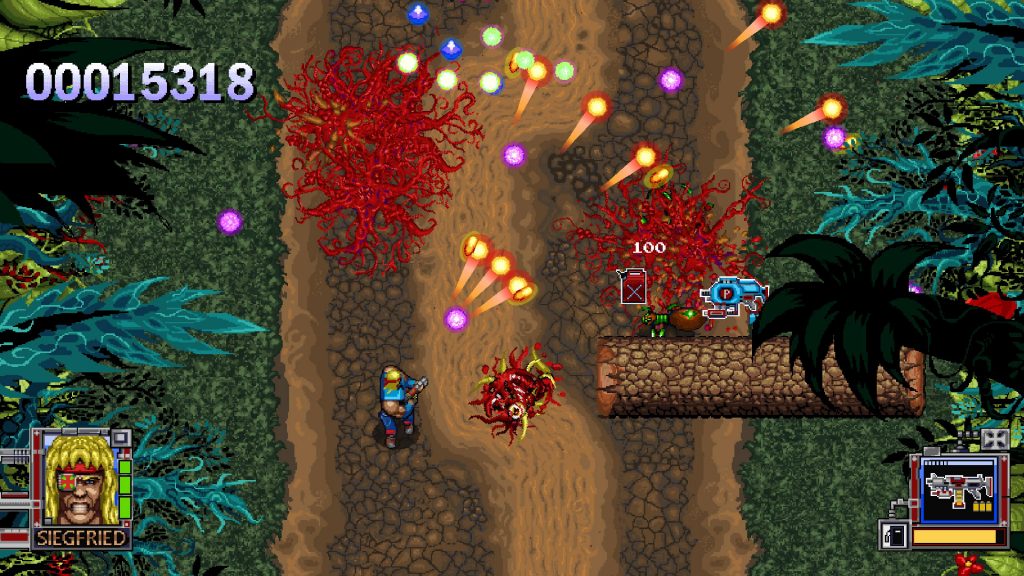 Once you get into the action, it’s all very self-explanatory.  The only additional quirks are that you can pick up temporary bonus weapons such are rocket launchers, plasma guns and mortars and your main gun can be powered up a few times.  While your primary gun has bottomless ammo, your flamethrower does require refuelling.  It’s mainly used to burn out nests to stop extra enemies from spawning but, on the game’s Easy mode, it can also stop bullets.

So, what type of twin-sticker is it?  Well, the game owes a lot to the style and format of Total Carnage, Midway’s spiritual successor to Smash TV.  This is due to it have scrolling levels.  Amiga fans may recall The Chaos Engine which was similar.  The game’s press page cites Ikari Warriors, Commando and SNK’s fabulous Shock Troopers as influences too while we detected a heavy dose of Alien Syndrome in there too.  The good news is, despite the scrolling, the levels are tight and easy to navigate.  Generally you just need to head upwards but you can take detours to hunt for weapons or health or to pick up bits of plot.  Unfortunately, these are presented in the worst way:  as pop up boxes of text.  They also block the screen while you read and don’t really add anything to the experience so we dodged them for the most part. 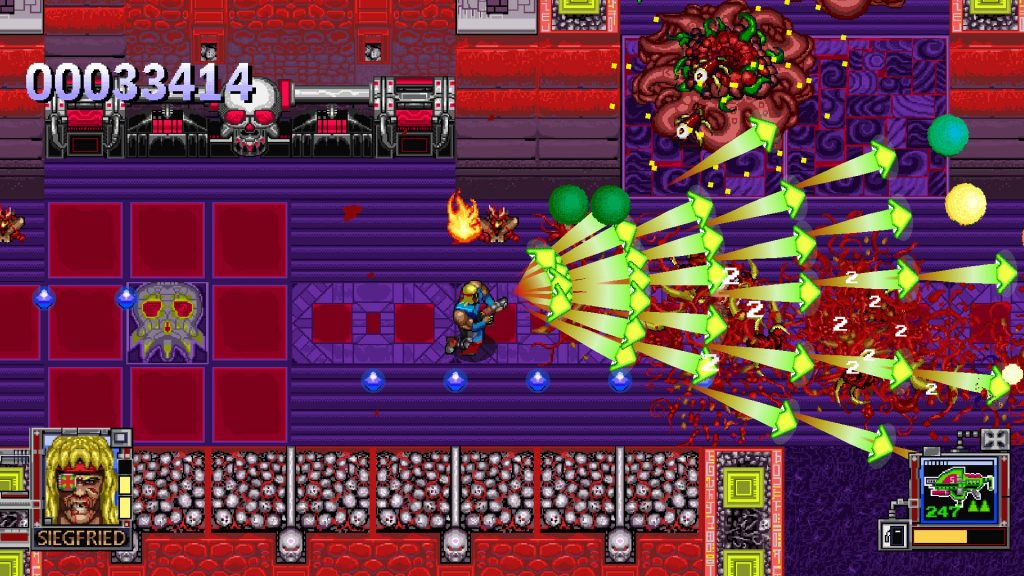 What we did like however was the pace and energy of the game.  The short levels are packed with enemies and you’ve got the firepower to take them on single-handed which is great.  The action flows and is exciting throughout.  The boss battles are a little bit generic (show me an arcade game where that isn’t the case) but they’re relatively well-balanced and so we never got too caught up on them (playing on Normal anyway).  With shooters you want to feel powerful but vulnerable and SturmFront nails that.  You can’t rush in, indeed that’ll just get you killed in no time, but if you’re cautious and tactical then you’ll find yourself prepared well for success.

The game isn’t too long with just five stages to get through, and thankfully the game lets you continue from the start of the stage you die at, so you won’t get that ’80s frustration.  But the game does put up enough challenge to make it rewarding.  Beating the game on Hard is a whole other thing though with all of your enemies getting a firepower upgrade.  And of course there’s a trophy for 1CCing the game, but this can be done on Easy if you wish. 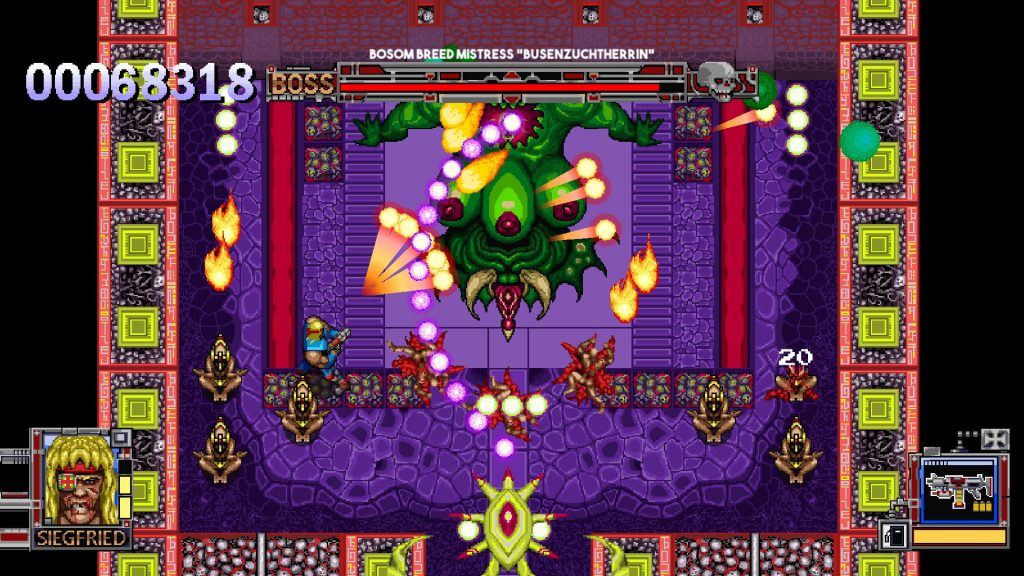 There’s not much variety.  The concept art (an unlockable extra) hints at plans to include vehicles but they were scrapped and so this is just a standard run and gun twin-sticker but that’s absolutely fine because it all feels well-crafted enough to carry such a focused approach.  Some of the item placement on levels can be a bit weird with weapons and power ups placed right at the end of a stage but for the most part it feels cohesive enough and at least it’s not all randomly generated.

The game’s heavy metal presentation gives it a unique feel too.  Aside from the mutant smashing gameplay SturmFront‘s mix of grotesque enemies and heavy metal tunes works well.  The music is actually pretty good, switching up from thrash metal riffing to more typical electronic tunes, and it gives the game an added sense of urgency and excitement.  The visuals are very ’90s in design but with a sharper modern resolution.  It’s not the most original looking game you’ve ever seen and, if we’re nitpicking, the forced perspective can sometimes be slightly confusing but the game has a lot of character.

We’d have liked to see some co-op, after all it was a staple of games like this in the ’80s, and some might complain that the game is too short (we disagree though, short games are great) but if you want an authentic feeling arcade twin-sticker without the tedious pixel-art visuals, SturmFront does a fine job.

SturmFront - The Mutant War
7 Overall
Pros
+ Well-presented with a retro feel without retro visuals and sound
+ Action-packed gameplay
+ Good difficulty options
+ Is a lot of fun
Cons
- Co-op seems like a big omission
- Some might find it a bit too short and samey
- Not very original
Summary
SturmFront feels like an '80s arcade game but with more balanced gameplay and better presentation. It's a tad short and we'd have liked to see a co-op option but it's also a lot of fun and that's what really counts.