Finding the Flowzone is the second, and final, DLC for Roll7’s OlliOlli World, itself the third game in the OlliOlli series.   We reviewed that back in February, giving it a score of 8 and praising the gameplay and track layout improvements that the series badly needed.  For those of you new to the series, you’ll probably want to read that review but we should probably summarise it, and the series as a whole.

The OlliOlli games are 2D skateboarding games.  The first one was somewhat similar in style to one of the OG endless runners, Canabalt with its urban enviroments and minimalist visuals.  The game saw you skating through fairly linear levels with the emphasis being on using flips, grabs, spins and grinds to create Tony Hawk Pro Skater style combinations while the second game, OlliOlli2: Welcome to Olliwood added a few extra gameplay elements, most notably manuals which allowed you to keep those combos going and created the possibility of completing entire levels in single huge-scoring combos. 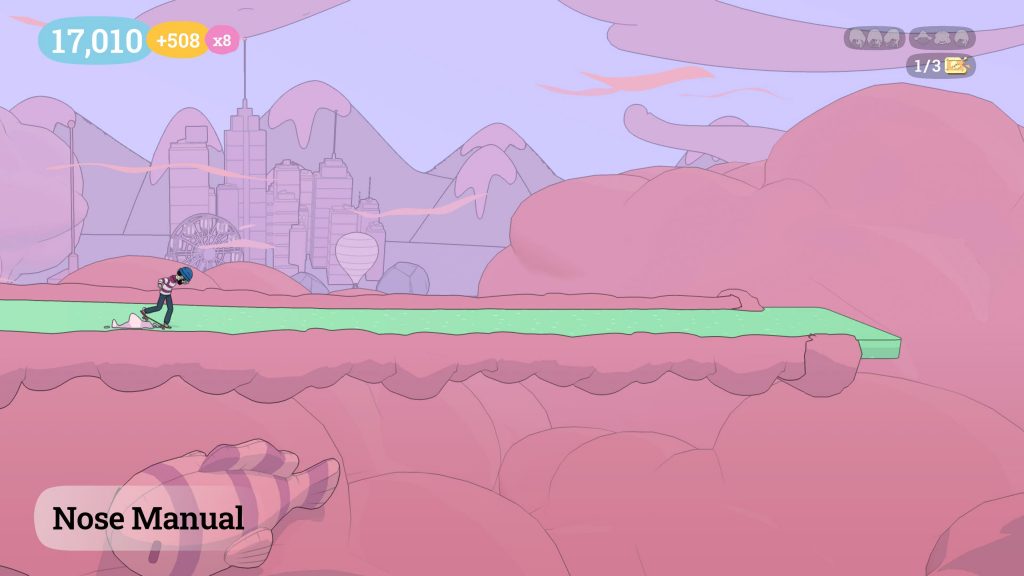 The first two games were astonishingly addictive affairs but were let down somewhat by the later levels which were difficult to complete at all, let alone with any degree of style.  Thankfully, OlliOlli World rectified that somewhat.  In this game completing the levels wasn’t too difficult but a list of difficult extra challenges always meant there were elements to master and this meant that casual players and experts were both catered for.

We weren’t entirely sold on the cartoony visuals though.  For us, World was the least cool of the series.  Especially as it a cast of silly cartoon characters, all picked from various ‘gnarly dude’ skating game archetypes.  However, the gameplay was absolutely the best in the series, even if we weren’t sold on all the new additions such as the giant crystals you’d have to break through.  Other elements, such as the wall-riding were very nicely handled though. 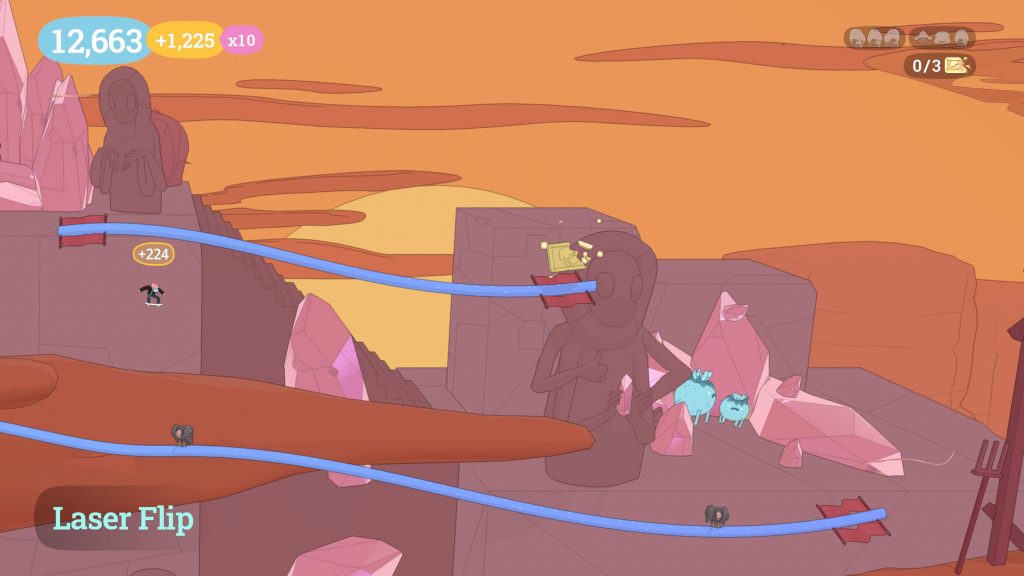 This DLC adds ‘windzones’ which aren’t really much of anything.  They are just gusts of wind that speed you up or change your direction (in the same way that quarter pipes did in the main game) and you don’t need to do anything to trigger them.  So really, there’s not really anything new to learn here but there is a short tutorial anyway and at least this new mechanic fits in well with the existing gameplay.

There is a new story which sees you trying to stop B.B. Hopper, a “business frog” from exploiting Radlantis, a hidden city in the sky.  You are aided by the Radmospheric Three who set the challenges and Gail Force, a skate god, who creates the windzones that you’ll need to beat if you want to master this DLC and save Radlantis.  As with the main game though, we soon lost interest in the story as honestly it all feels a bit childish compared to the earlier games in the series and that’s at odds with the gameplay which, for sure, isn’t for kids. 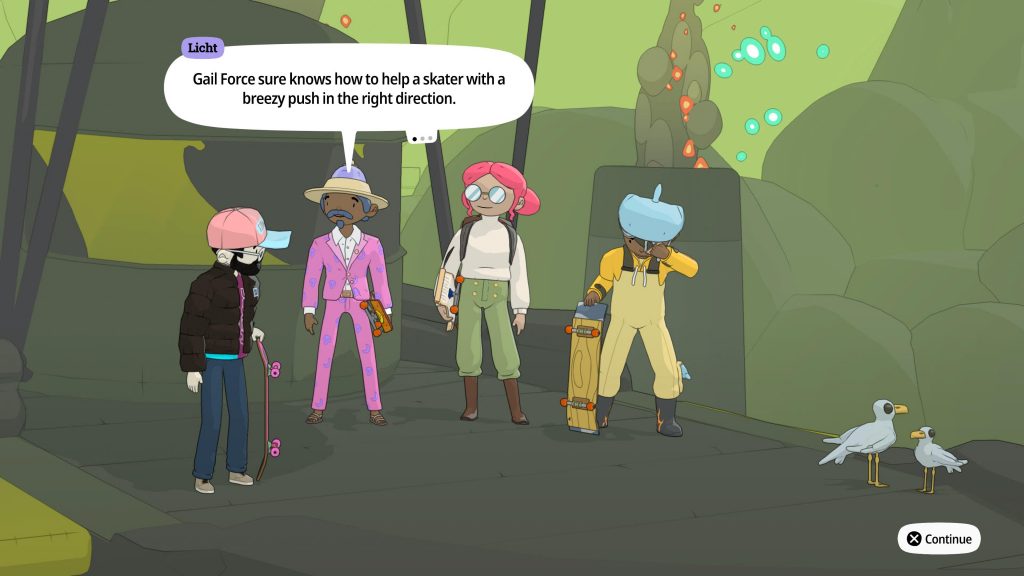 In terms of content, Radlantis represents a whole new area to skate in and with five zones that are gated out by map pieces that you’ll need to collect in order to open them.  Thankfully, you won’t need all the map pieces but by the time we reached the last of the zones we did have to go back to earlier levels to try to find a few more of them so that we could access the last three levels.

The levels here, of which there are 17, are all very much in-keeping with the main game.  They’re reasonably short and generally quite easy to finish if you’re just playing casually but, as expected, the challenges associated with them are rock hard.  And if you want to find all the map pieces (for simple completionist reasons), you’ll need to use all of the skills and techniques introduced later in the main game to trigger the alternative routes required to find them.

One issue we had was that we hadn’t played the main game for over six months and certainly there was a whole learning curve in just figuring out how to play it again (especially as we went all in on the Tony Hawk 1+2 remaster) but the controls are so good in OlliOlli World and, by extension, this DLC that we were soon able to find our flow again. 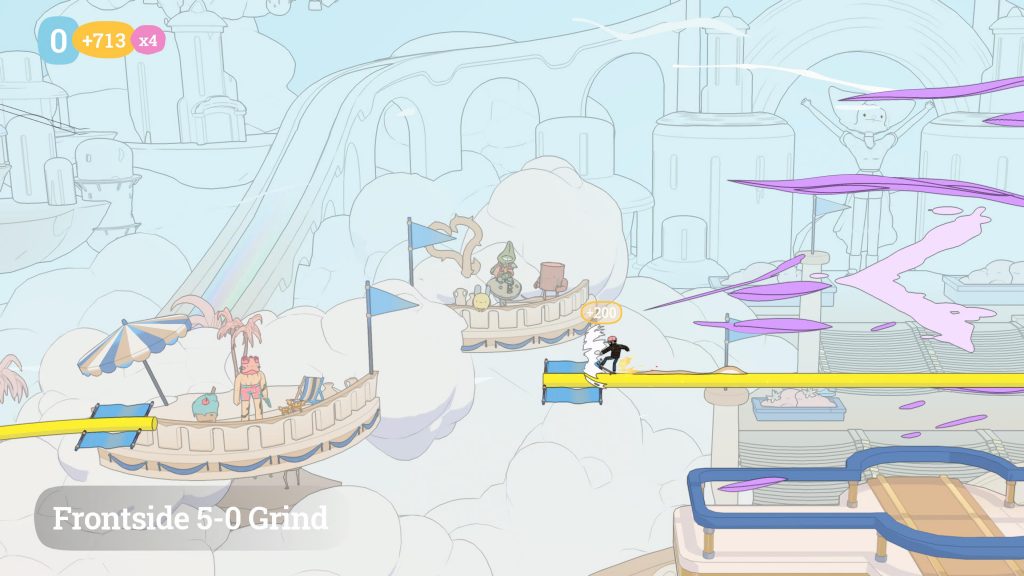 In terms of presentation, this DLC is very much in keeping with the cartoony look of OlliOlli World but now with a bit of a sky theme.  While we didn’t really appreciate the look back when we reviewed the main game, it didn’t feel like as much of a shock this time around and now we were able to enjoy the clean simplicity of it and appreciated how unobstructed the view of the stages is.

While this DLC doesn’t add anything meaningfully new, it provides decent value for fans looking for more levels and customisations.  The windzones don’t really add much at all but if you think of this as a level pack with challenges that will take weeks and maybe months to master, then you’ll be happy with what you get.   This is very much just a DLC for fans of the original game and while this content is accessible right away, the harder ‘gnarly’ and ‘burly’ alternate routes in the new levels often require techniques that are only unlocked later on the main game, so bear that in mind.

OlliOlli World: Finding the Flowzone
8 Overall
Pros
+ 17 new levels
+ Plenty of new challenges to master
+ Just as good as the main game
Cons
- Story, and silly characters, still feel unnecessary and out of place
- No real new gameplay mechanics
Summary
As the premier 2D skateboarding series, our expectations for any new OlliOlli content are always high and while this DLC doesn't add anything particularly game-changing, the new levels and challenges are just right for fans of the main game.

One thought on “OlliOlli World: Finding the Flowzone – PS5 Review”