Game Type DX is a horizontally-scrolling shoot ’em up from Nathan Fouts, the solo-ish developer behind Mommy’s Best Games.  We’ve covered his work before, reviewing the sensational Shoot1UP DX as well as Weapon of Choice DX and Explosionade DX.

If you’re not familiar with Fouts’ work, he tends to specialise in shoot ’em ups that combine all out action, off-the-wall visuals and a great sense of humour and that’s definitely the case with Game Type DX but before we even get into the core shoot ’em up mechanics, this game’s biggest gag is reserved for its front end. 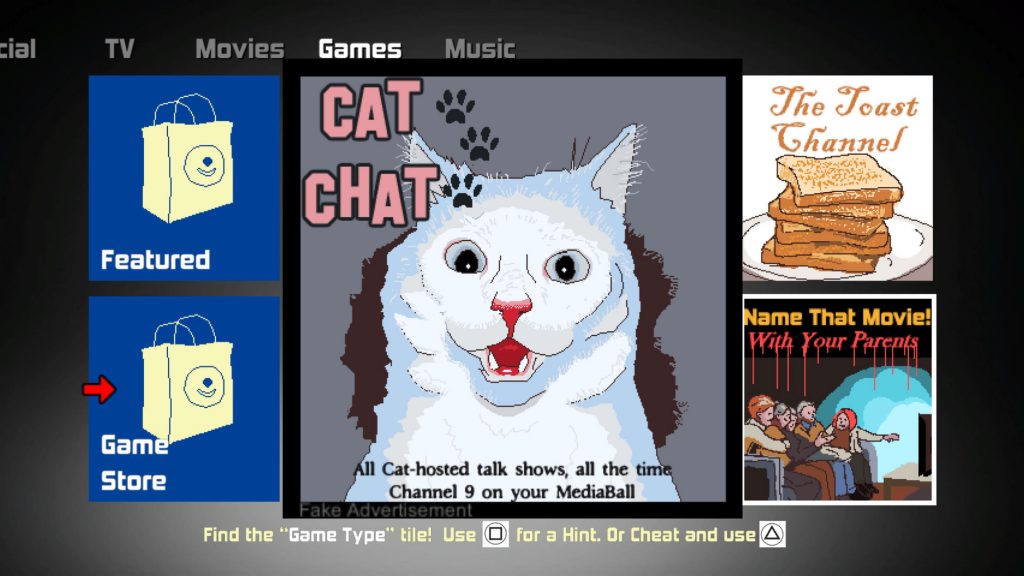 Now you might think that burying your game’s starting options behind four layers of menus is an odd choice, and it certainly is, but for those of us who are Xbox 360 veterans, we definitely get the joke here.  When you fire up the game you get a low-fi recreation of the Xbox 360’s NXE (New Xbox Experience) dashboard which is complete with fake adverts, TV listings and so on.   You have to go out of your way to actually get to Game Type DX, while looking at adverts for such things as a TV show called Cat Chat.

Eventually, you’ll get to the game itself and younger gamers might, at that point, be thinking ‘what the hell was all that about?’ and they’d be right to.  But for those of us who remember Microsoft switching the 360 from the glorious original ‘Blades’ interface to the clunky, complicated NXE one, it’ll raise a chuckle. 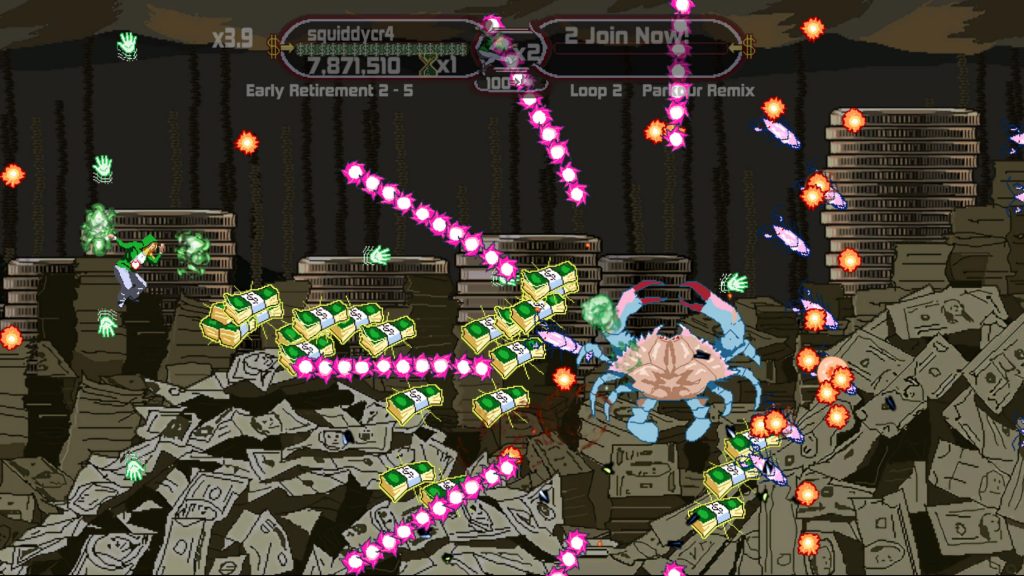 When you do get to main game itself, the weirdness will only just be beginning.  You play as a girl in a hoodie who looks like she’s straight out of Jet Set Radio and while the word ‘parkour’ is constantly mentioned, she’s really just your standard shoot ’em up avatar.  She’s not a space ship or plane but we’ve had ‘people floating in space’ shooters before such as Forgotten Worlds.

Hoodie Girl has two main attacks.   Her primary attack is weaker but multi-directional and also has the benefit of covering her back which is important as enemies arrive from all angles in this game.  Her secondary attack fires off a massive forward-facing beam.  This is powerful and has the advantage that it can slow down enemy bullets too.  However, it has a power meter which has to be refilled.  You do this by picking up floating cash, although you can have that fly towards you if you stop shooting for a second.  Picking up cash also increases your multiplier, leading to some significant score-chasing opportunities (and hopefully some good leaderboard battles). 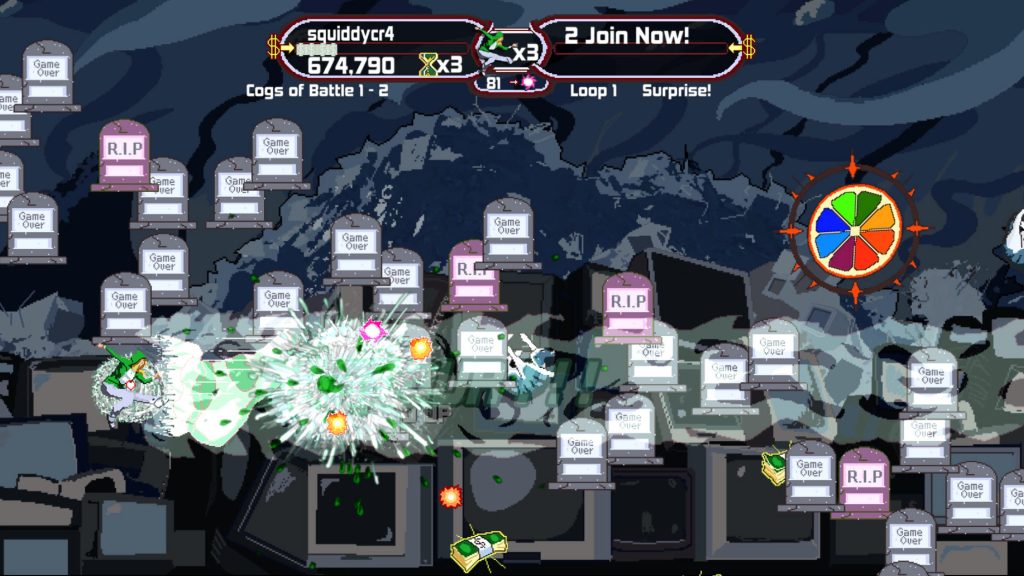 Aside from that you also have a ‘Time Pulse’ weapon which slows down time.  In this mode it’s a lot easier to navigate the sheer insanity that you’ll be faced against and it also allows your secondary weapon to destroy enemy bullets.  So there’s definitely scope for some good tactical play here.

Where Fouts’ trademark humour comes in is in the fact that things that you see in the fake NXE dashboard end up being adversaries and obstacles in the game.  Considering how much was in the fake front-end, we’d have liked to have seen a bit more variation in the main game but when you’re being attacked by a giant cat who throws desks at you, it’s hard to have any complaints although with that character acting as the big boss, and showing up multiple times, we’d have liked to have seen other bosses.

The only real issue with the game is that once you get past the silliness of it all, it doesn’t feel like there is much to it.   On our first go we made it past the tenth loop (a loop is a level in this game) and felt like we’d pretty much seen everything.  There’s a little bit of variation as Game Type DX does add a couple of extra modes but these are really just remix the main game (although ‘Surprise’ mode does add additional power-ups and a real sense of mayhem).  But if you just focus on short sessions on the game and high scores, the game will keep you interested. 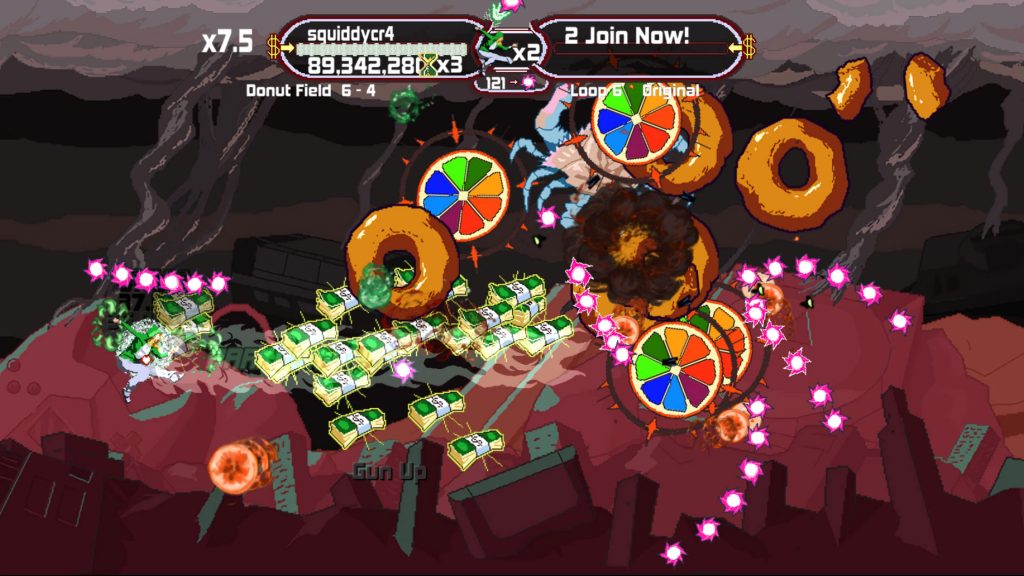 In terms of presentation, the visuals have the same insane intensity as Fouts’ other titles and while the screen does get absolutely crammed with bullets and foes, we were generally able to plot a path through everything without any surprise deaths.  That said, the graphics aren’t particularly impressive and that’s partly down to the homemade indie aesthetic that they’ve gone for.  Indeed, the fake NXE dashboard, while being a good idea, does basically look like it was made in MS Paint.  The music is suitably manic though with some big tunes that kept up with the intensity of everything else that was going on.

We really like shoot ’em ups here at PSC and so we were very happy to have several blasts on Game Type DX and it’ll stay on our PS5’s hard drive as we try to aim for the tricky-looking Platinum.  You can’t help feeling that the game’s overall scope is just a tad limited (especially as we recently reviewed Sophstar which felt a lot more comprehensive, albeit almost twice the price of this title) but if you want a game that offers a fun, but condensed, shoot ’em up experience with a ton of intensity and some good scoring mechanics, then this could be a great option for you.

Game Type DX
7 Overall
Pros
+ We popped for the front end joke
+ Good core shoot 'em up mechanics
+ Decent scoring system
+ Mad visuals add to the humour
Cons
- A little limited in scope and variation
- Does look very 'indie' at times
- Only has one real boss enemy
Summary
Game Type DX is a shoot 'em up inspired by the old Xbox Live indie scene and so it can feel a little bit limited in terms of presentation and gameplay but what you get here is an action-packed shoot 'em up with a good sense of humour and some decent core mechanics.