Inertial Drift is a racing game that was released in 2020 on PS4.  Our guy Ian reviewed it back then and kind of liked it but wasn’t overly sold thanks to the erratic difficulty balance and a lack of cohesion in terms of what type of game it wanted to be.  However, the game did get mixed reviews but plenty of very positive ones and now it is back, with the new Twilight Rivals DLC.  But before we get into that, let’s recap the original.

Inertial Drift is best described as a twin-stick driving game.  When you first fire it up, you’ll think that your cars handle more like trucks.  Sure, the controls are initially what you’d expect with the triggers handling acceleration and braking while the left stick controls your steering but that steering feels like you are trying to steer through wet concrete. 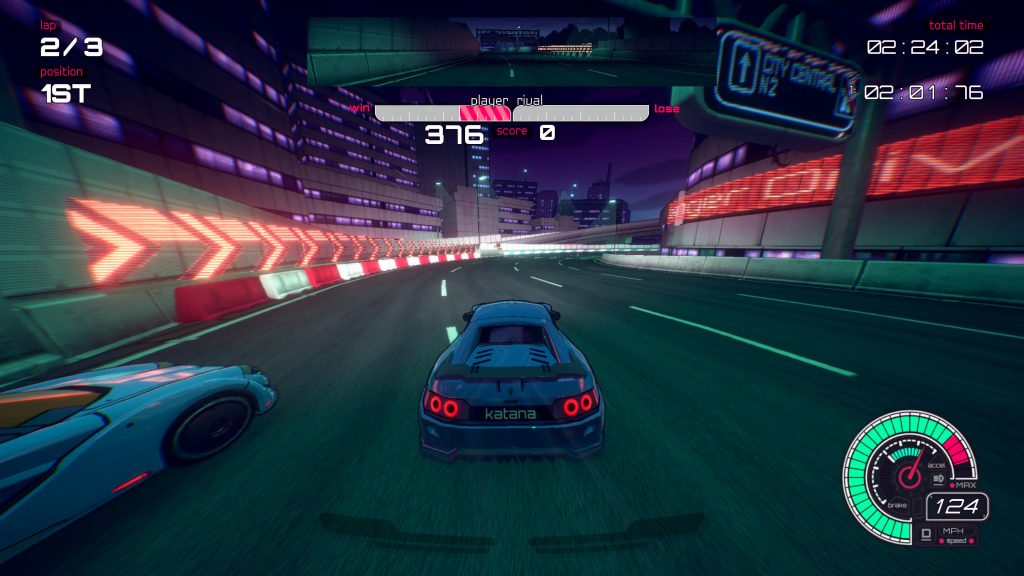 However, once you engage the right analog stick you’ll fling those fat-bottomed cars into glorious, exaggerated drifts that brought to mind the fun we had with the sensational Out Run 2.  However, where that game saw you racing against multiple rivals through exotic locations, Inertial Drift is a little bit more limited in scope.

Here you’ll be racing off against either one rival at a time or you’ll be taking on time trials and ghost challenges and even when you are racing one on one, your cars pass through each other, so really it’s just another ghost race but with the transparency turned off.  And while we’re complaining, progress was often gated off by the need to win one event which would then stop you doing anything else in the story mode.  This could be frustrating, especially when one event could often be inexplicably harder than the one following it. 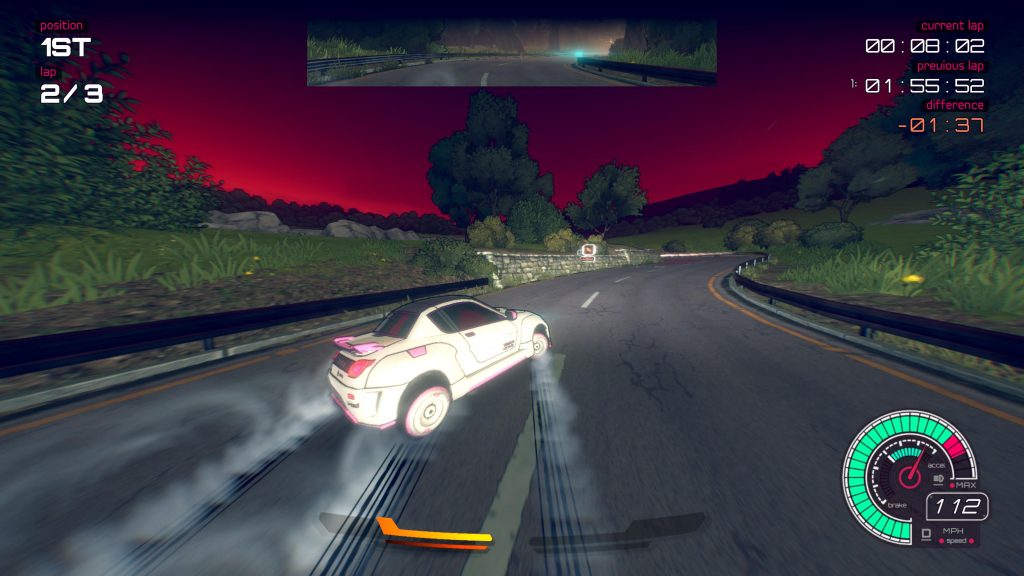 Twilight Rivals has much in common with the main game.  Obviously, it keeps the control system and still sees you running laps through pretty cel-shaded tracks in either duels, time attacks, ghost events or races but it does offer a new story and, by association, new tracks to race on.

Where you played as one of four characters in the main game, here your choice is now of who your rival will be (hence this DLC’s title).  There are four racers (all complete with generic street racing personalities) and once you commit to making one your rival you’ll compete with them across five tracks in the aforementioned race types.  As before, each event acts as a gate to the next one, and you still can’t adjust your difficulty.  That said, each rival has a different difficulty level associated with them, so if you’ve picked the easy guy and you can’t beat him, then you’re out of luck. 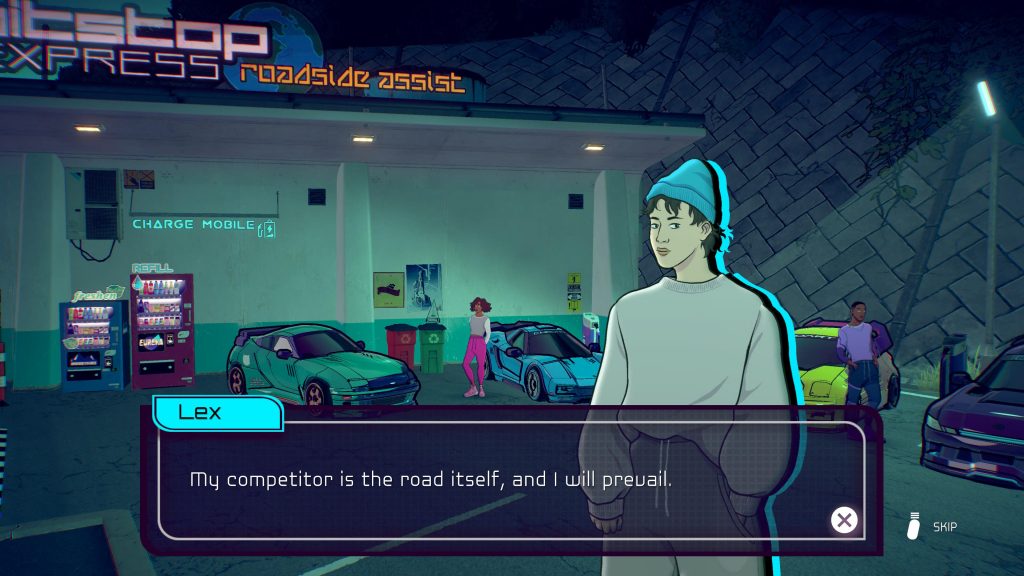 And initially that’s exactly how we felt as we struggled to beat him on the very first event.  At first we thought this was down to his inexplicable bursts of speed at the end of the race, leading us to suspect there was some rubber-banding happening, but in the end we realised it was just our own lack of skill and we eventually managed to beat the event fairly comfortably.

That then saw us absolute smoke our targets on the next few tracks right away until eventually hitting another brick wall.  That said, we were able to complete the entire campaign and then do the same on the next rival too.  It can be frustrating, especially if you lose out at the end of a five minute race, but eventually practise does make perfect. 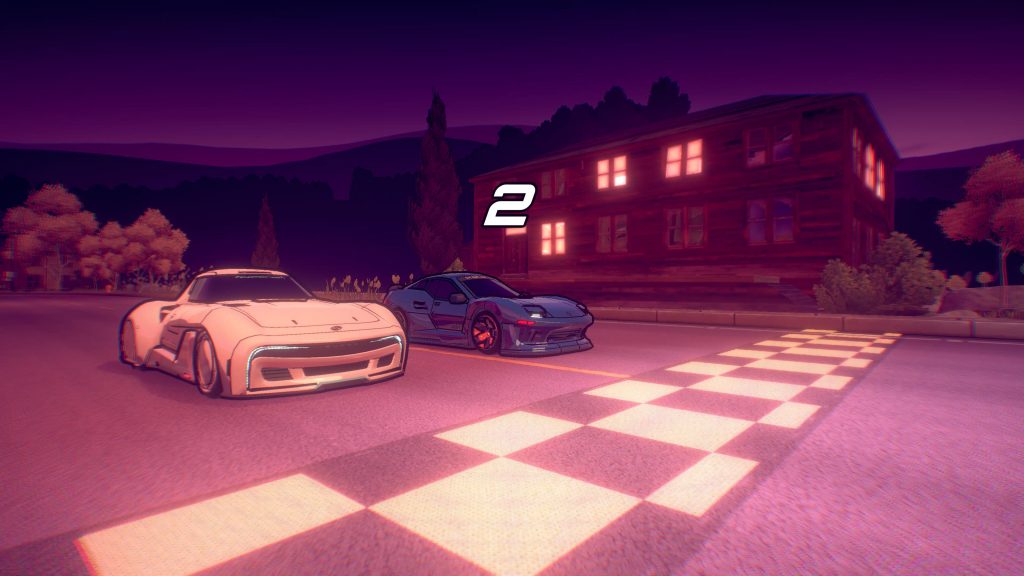 We played through the main game’s campaign too in preparation and yeah, this is pretty much just more of the same.  The same niggles exist in terms of the gated progress, the slightly boring tracks and the way that different cars engage the drifting mechanic differently, which causes an unwanted adjustment period.  And of course, if you can’t crash into your opponent or affect them in any way, then really every event is just a time trial.  Also, the music is still horrible.

On the plus side, the controls, for the most part, feel great (we’re amazed that more games haven’t stolen the twin-stick racing set up) and the cel-shaded look works well with some of the late ’80s neon touched locations.  When you’re nailing perfect drifts through long sections of winding tracks, Inertial Drift feels almost as good as any racing game ever made.

With the main game setting such a good foundation, we’d have really liked to have seen more from this DLC than just four new generic characters and more races using the same old modes.  Weaving through traffic Burnout-style would have been amazing, as would a little bit of shameless Out Run branching route action.  The game engine is pretty much where it needs to be, it’s just the overall structure that could use a bit more work. 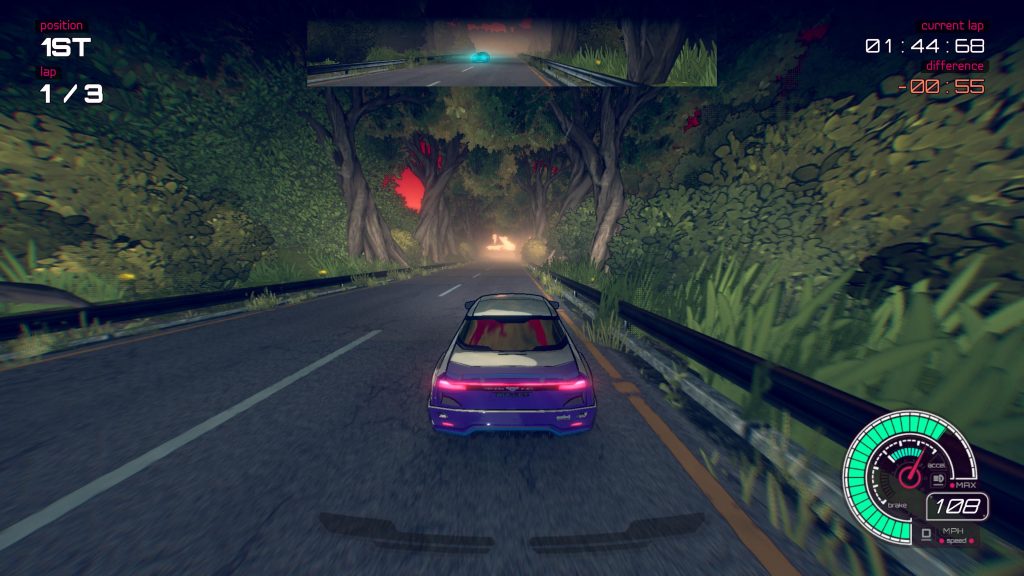 The shift across to the PS5 has helped though with two new visual modes now on offer.  There’s 4K available but we soon switched across to the buttery smooth 120fps mode which is a little slicker and not really noticeably less pretty.  Sure, there were some jaggies if you really looked for them but for the most part we were happy to stick with this option.  You also get some decent haptics and you’ll feel those drifts thanks to the adaptive triggers getting a workout too.

We’re still not sure why they’ve not included a mini-map.  Especially with those turns coming thick and fast, it can be tricky to see what’s coming up next (although not so tricky that we could blame it for any poor performance).  It was an odd omission in the first game and so we were disappointed to see it not be addressed here.

If you want a fast racing game with lots of lovely drifting action and some cool visuals to see out of the corner of your eye as you’re frantically trying to shave seconds off of your lap time, then Inertial Drift is a good shout and if you like that then this DLC offers some extra content for those who’d welcome an extended story campaign from the main game.  It’s still not perfect and some of our original issues are still apparent and the bundled price of £24.99 feels a tad high for a game that still feels very indie (it’s £7.99 if you just purchase the DLC but, of course, you’ll need the original).  But for all of our complaints, Inertial Drift can be a lot of fun and very satisfying and we can definitely recommend it even if we’d also recommend waiting for it to show up in a PSN sale first.

Inertial Drift: Twilight Rivals
7 Overall
Pros
+ The drifting feels great
+ Twin-stick controls work really well
+ Nice cel-shaded visual style
+ Good haptics
+ Supports 120fps
Cons
- The various race modes feel very samey
- Difficulty curve is still a bit off
- Tracks can lack character
- Every race feels like a time trial
Summary
Inertial Drift benefits from a port over to the PS5 and this DLC offers more of the twin-stick, drifty madness of the main game. However, some of the original issues we had in 2020 with the difficulty curve and lack of variation haven't been fixed and, worse, have been continued in this DLC. However, if you're a fan of the original then this will be a welcome addition.