OlliOlli World is the third game in Roll7’s famed skateboarding series, one that is known for cool visuals, cooler music and intricate skating gameplay.  Arriving some seven years after the previous title, this game arrives with a mixture of familar gameplay concepts but married to a very different looking game.

For the uninitiated, the first OlliOlli dropped in January 2014 and took the stylish look of the endless runner Canabalt and mixed it with the analog stick controls of EA’s magnificent game SKATE.  The combination of bleak, urban visuals, super cool trippy jazz beats and intricate skateboarding made for one of the most addictive games of the year.  In it you played as a lone skater, travelling along a 2D scrolling level, pulling off flips, grinds and combos in an effort to hit score targets as well as completing stage-specific challenges. 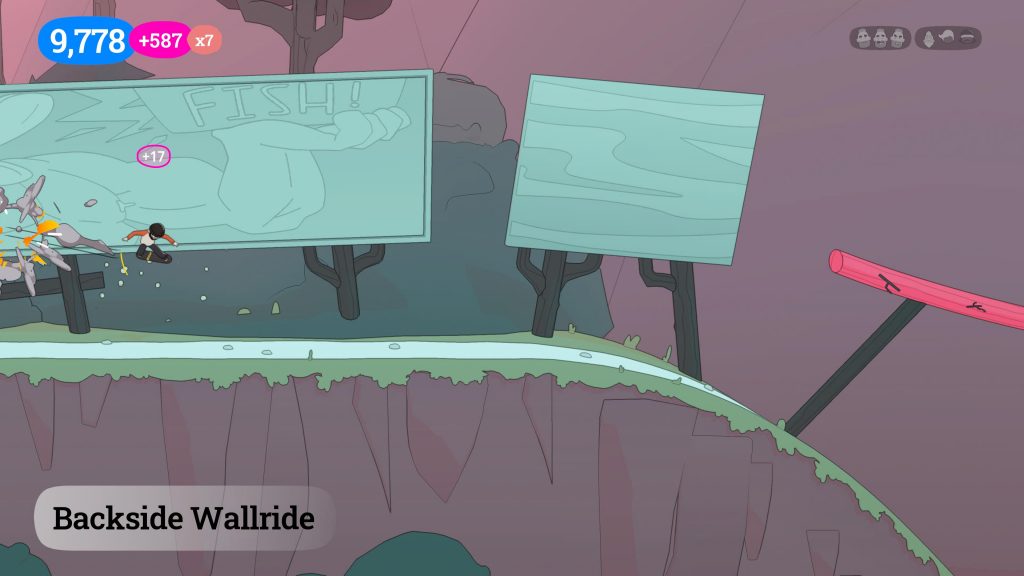 It was fantastic…. until a point.  The sad truth about OlliOlli is that it was just a bit too hardcore after a while with the later stages being so difficult that even finishing them was difficult, regardless of hitting scores and beating challenges.  The awkwardness of the level layouts meant that you went from being in a flow-state to having to memorise complicated sequences to the point where the flow disappeared and was replaced with utter frustration.

The second game, OlliOlli: Welcome to Olliwood, which was released a year later, was very similar in terms of gameplay but went for a smoother, slightly more cartoony look.  It added a couple of gameplay elements and a different setting but it was more of the same and also had a similarly tough difficulty curve.

But now we have the third game in the series and it makes some big changes to the gameplay and aesthetics.  The first thing you’ll notice is that the game goes for a much brighter and breezier look than before.  Now there’s a plot where you play as a skater trying to impress the “Skater Godz” of Radlandia, a skateboarding utopia.  A cast of weird characters take you through the ‘story’ of the game but this is really just an excuse to drip feed gameplay mechanics, many that the series already established and some new ones. 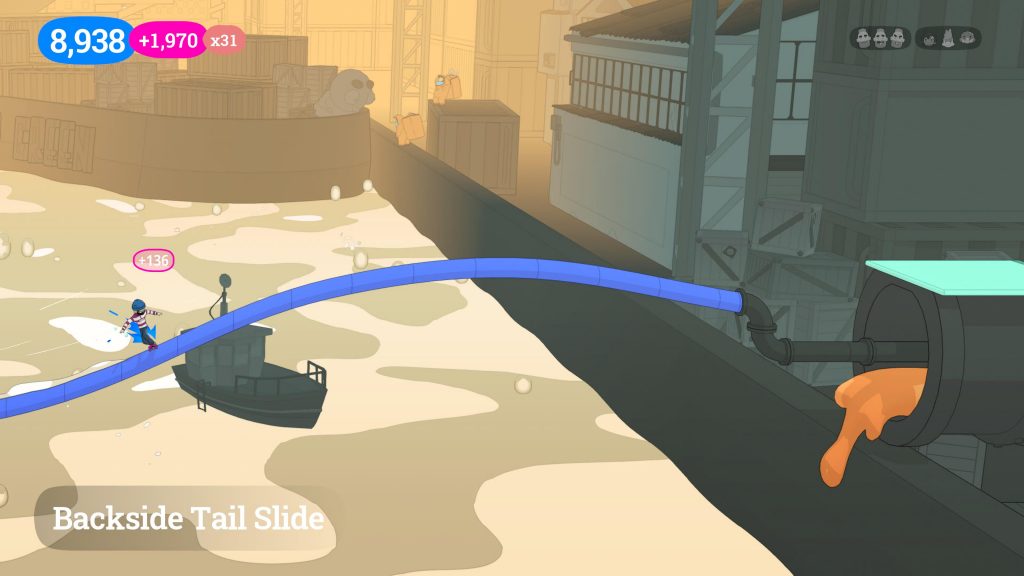 It’s all presented in a very cartoony style, somewhat similar to Adventure Time, and that does take a bit of getting used to.  While it’s good to mix things up, we found ourselves skipping through all of the dialogue offered.  None of the jokes were really landing and it’s all just feels like lazy skater dude speak but for the meme generation.  But between that and the new look, we were a little bit unimpressed at first.  The main problem though is that it all just adds button presses to get to the gameplay.  If you look at OlliOlli‘s interface, it’s still a thing of minimalist beauty.

When you get into the skating though, things get much better.  The first big change is to landings.  In the first two games, when you land a trick or combo you had to press

.  Time it right and you’d get a decent score bonus, get it wrong and you’d end up making a ‘sketchy’ landing which would kill all of your momentum.  This gave an almost rhythm-action type edge to the gameplay but was the one element that pushed OlliOlli out of the casual zone and into the less friendly hardcore one. 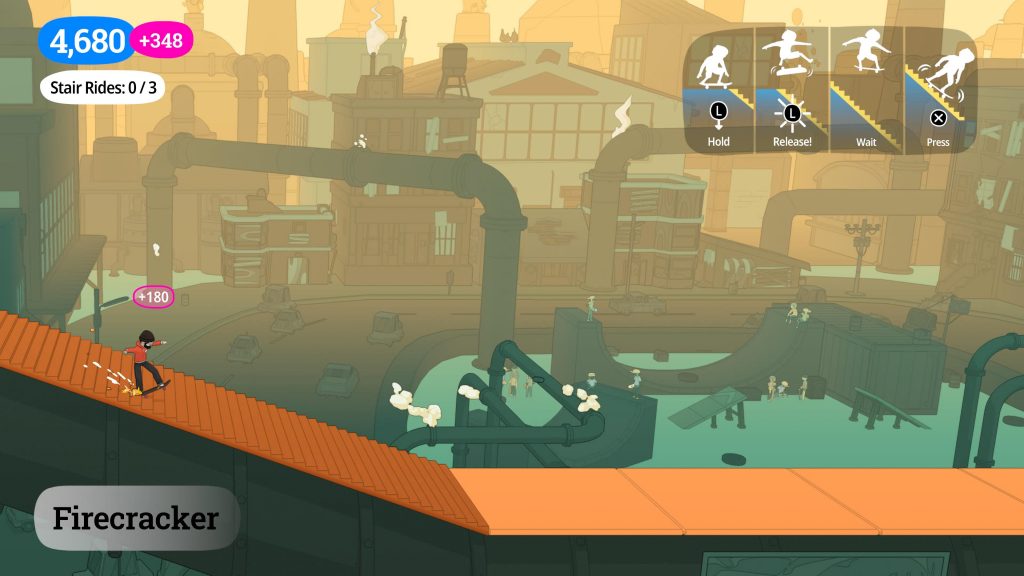 In OlliOlli World, you’ve still got a landing mechanic but now if you miss your timing all you lose is your bonus points, it doesn’t scupper your run.  This is a massive improvement, one that makes this game just so much more fun than its predecessors.  They’ve also added added grab tricks (which use the right stick), wallrides, the ability to skate on staircases, lane-switching (allowing you to reach harder ‘gnarly’ routes) and a slightly odd thing where you crash through crystals.  And of course you still have the flips, advanced tricks, manuals and spins of the other games too.

The game’s new look also makes a meaningful difference to the gameplay too.  The cartoony graphics facilitate much smoother animations than before and the new 2.5D engine allows the camera to swoop in and out, which facilitates the ability to make quarter pipe airs which will then let you change direction.  So instead of just going from left to right, you can down go back and forth a bit.  You’re still on a lineal track, save for those lane switches we talked about, but it feels a little bit more free than before. 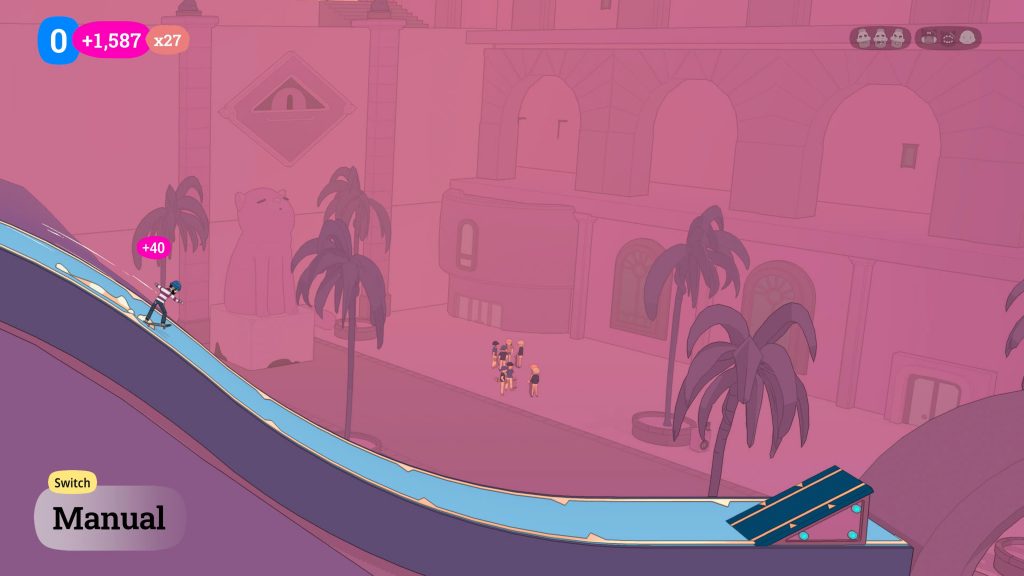 Having revisited the first two games, for researching this review, it’s clear just how much better the gameplay is now.  Sure, it does much of the same stuff as before but the game is now less interested in punishing your mistakes.  You don’t have to line up your spins perfectly, you won’t stack if you overbalance on a manual and you can now land on steps.  It’s just so refreshing not having to worry about that stuff so that you can concentrate on expressing yourself.

That said, this is still a very tough game but now it’s in a good way.  If you just want to see the whole game, that’s fine.  The game’s hardest levels are much easier to finish than before and generally the game doesn’t pull that previous bullshit of making you have to jump off of grinds early to land in some tiny skateable gap or jump over a ramp because skating on it will make a crash inevitable.  There’s a little bit of that but it’s not the regular occurrence that it was in the later stages of the previous titles. 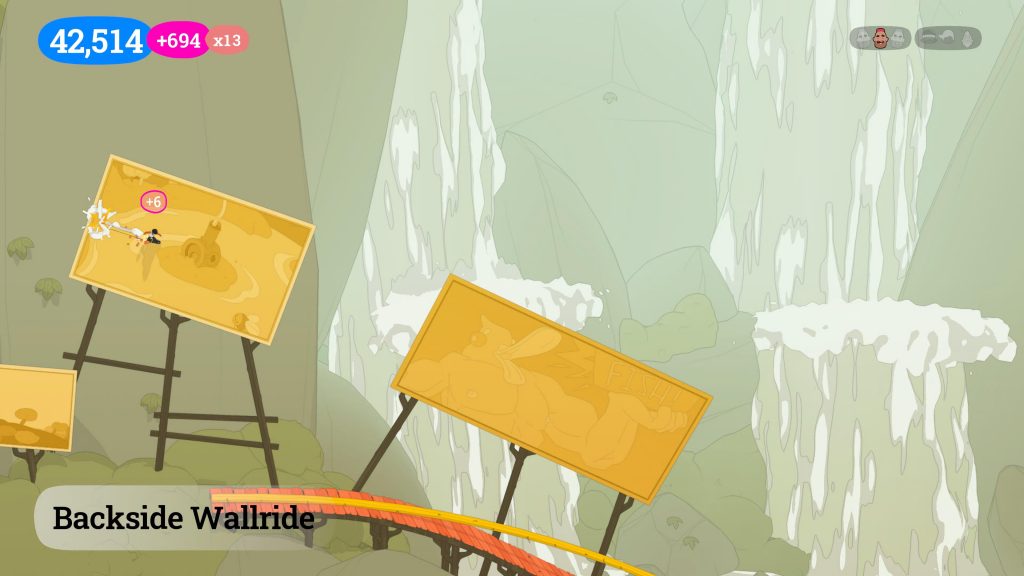 However, that doesn’t mean the game is easy.  For skating game veterans it’s definitely easy to get into but if you want to master it, and by that we mean beat all the challenges, you’ll need some seriously educated thumbs.  Each level has three challenges which scale up in difficulty quite quickly during the story campaign, but there’s also one super challenge on each level too and these are absolutely brutal.  And just beating each stage without using checkpoints also gets very difficult indeed.  That’s a good mix though.  We got through the game across a couple of decent sessions but to max it out will take even the most skilled gamer much longer to do.

We love games that do that.  Let us see everything but make us work to master it.  Not enough games have that figured out but OlliOlli World does.

So overall, we’re very satisfied with this game.  The visuals and story stuff aren’t to our taste at all but the gameplay has been upgraded, refined and undoubtedly improved so we can see ourselves returning to this one over and over and over again.  OlliOlli is back and better than ever.

OlliOlli World
8 Overall
Pros
+ New gameplay elements improve the game
+ Track layouts are massively improved
+ Soundtrack is still good
Cons
- Story just slows things down
- Visuals aren't as cool as before
Summary
We're not too sure about the new visual style and cheesy story but we've always loved this series and OlliOlli World has elevated and improved the gameplay a huge amount.