The clumsily-named QUByte Classics – The Humans by Piko, is a port of a handful of versions of The Humans, a retro-puzzle game from the ’90s that feels a bit like Lemmings but plays a little more like The Lost Vikings but if you’re not familiar, don’t worry.  We’ll tell you all about it.

In any version of The Humans you’ll control a number of cavemen as they traverse various levels in an effort to either obtain an object, reach an exit or rescue a fellow human.  One caveman is never enough though and so they’ll have to work together to get past various platforms, gaps and threats.  A single caveman is pretty useless.  They can walk or they can stand there like a human ladder so that another human can climb up them. 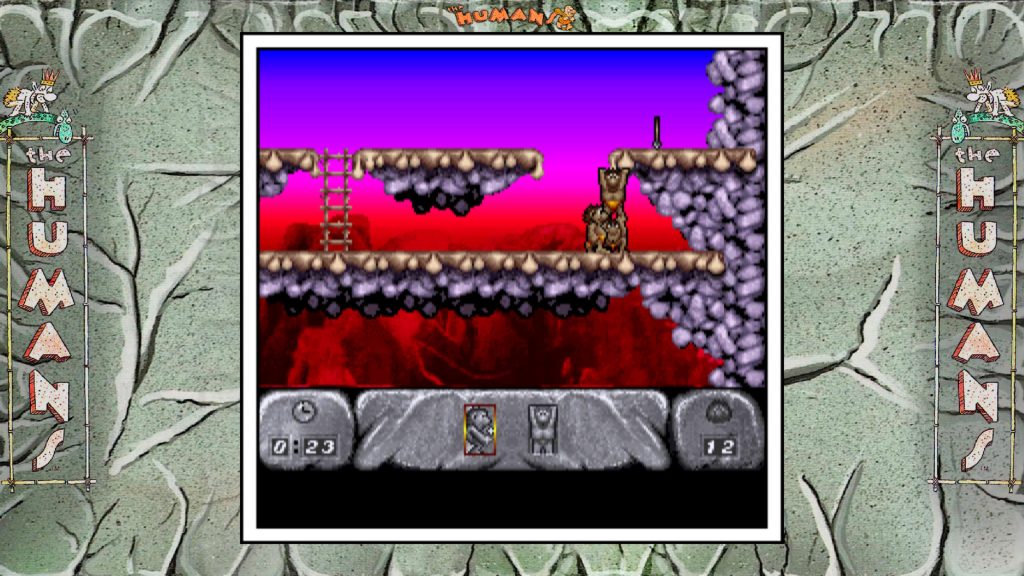 However, you’ll get a spear after the first stage and that will let you jump or use the spear to kill enemies (dinosaurs and people from other tribes).  Most of the time, the basic problem is that you’ve got a big gap that requires a spear jump and you’ve got four humans on the wrong side of it.  So in those situations you’ll need to equip the spear, jump, throw the spear across the gap, switch humans and do that until everyone is across.

You don’t need everyone to get to the exit, but you will need all of them to get one human there.  So you’ll leave some of them behind (for example, one the first level three humans have to form a large ‘ladder’ to allow one human to get to the objective).  Later on you can get some of those people back by using a rope to allow them to get up to a platform that they allowed another human to get to by being the ladder for them.

Essentially it’s just a case of trying to figure out where everyone needs to go and where you need your spear and rope to be.  However, later on you’ll also have to time your jumps to land on moving platforms and pterodactyls.  This adds a level of difficulty because if The Humans has an issue, it’s the controls.  There are different buttons for selecting a human, picking an action and then executing that action.  It’s unbelievably fiddly, never explained and inconsistently applied across all three versions of the game.  It’s one of the least intuitive things ever, although you can mitigate it a little by remapping your controls. 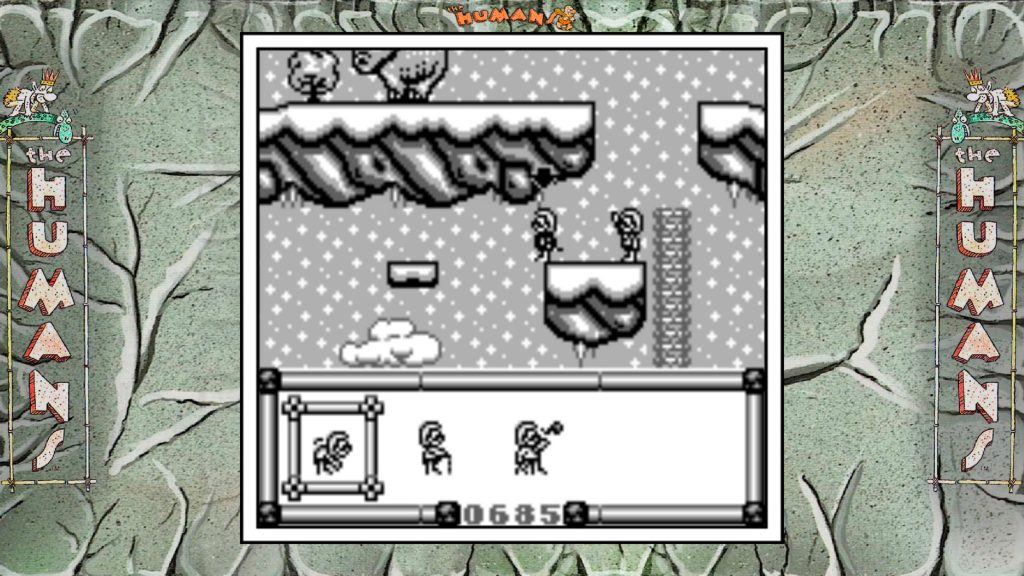 In terms of the core gameplay though, it’s actually not too bad.  The puzzles are a bit samey and they can get a bit annoying as the levels get harder but they aren’t so complicated that you can’t figure them out.  That said, the inclusion of time limits does put an unnecessary amount of pressure on the player which only adds frustration rather than any extra fun.  The game is slow, mainly because of your humans’ walking speed and the fiddliness of the interface, so putting on arbitrary time limits seems unnecessarily mean.  That said, this is just how things were in the ’90s before quality of life features were put in.

The controls and level layouts can also conspire to either make you fall through a ladder to your death or make your spear clip a bit of scenery which is pretty much a level ruiner for you.  Oh yeah, good luck figuring out how to restart a level on the 8-bit version of the game because the pause button seems to suffer from schizophrenia.  Luckily there is a quick save option to abuse but to be honest, it’s really just essential.  Without it this game would be getting a much lower score and our DualSense controller would be getting luzzed out the bloody window. 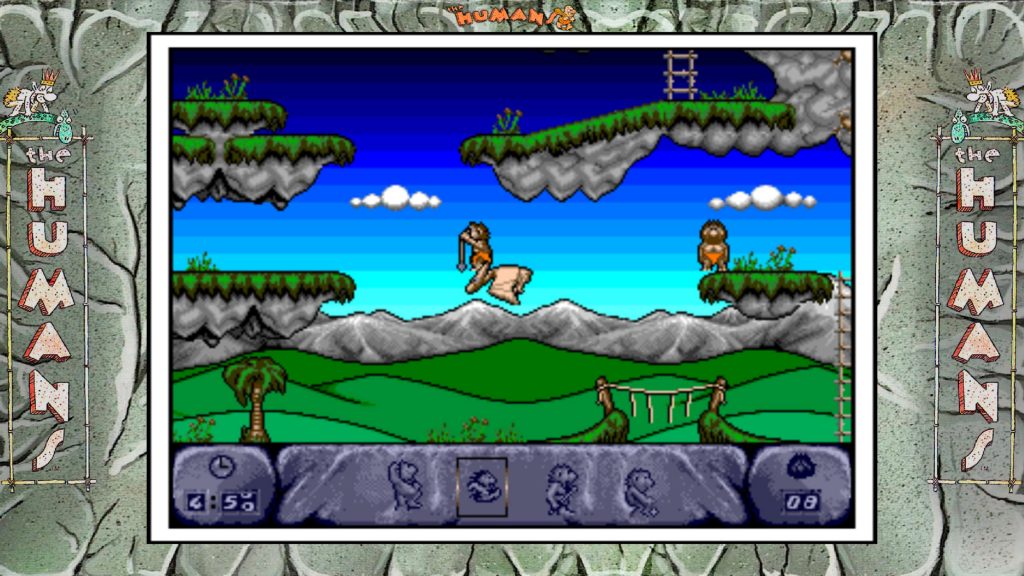 There is a fine line between the game being compelling enough to keep going and frustrating enough to stop and The Humans skirts that line a little haphazardly depending on which version you play.  So let’s look at those.  First up is the 8-Bit version which is a port of the original Game Boy version.  This has 28 stages all presented in early ’90s monochrome as you’d expect.  Despite looking extremely primitive, this was our favourite version because it had to limit the number of levels and simplify the controls a little.  It’s still fiddly and suffers from the issues that plague the other versions but we enjoyed this one more than we expected to.

Then you get the ’16-Bit’ and ‘Alt 16-Bit’ versions.  The former of those is the PC version we think (this game explains NOTHING) which has the same square aspect ratio as the Game Boy version but much improved visuals.  That said, the controls on this one were horrific with separate buttons for selecting an action and then for executing it.  It was so bad that we bailed after just a handful of levels and were surprised and how much worse than the Game Boy version it was to play. 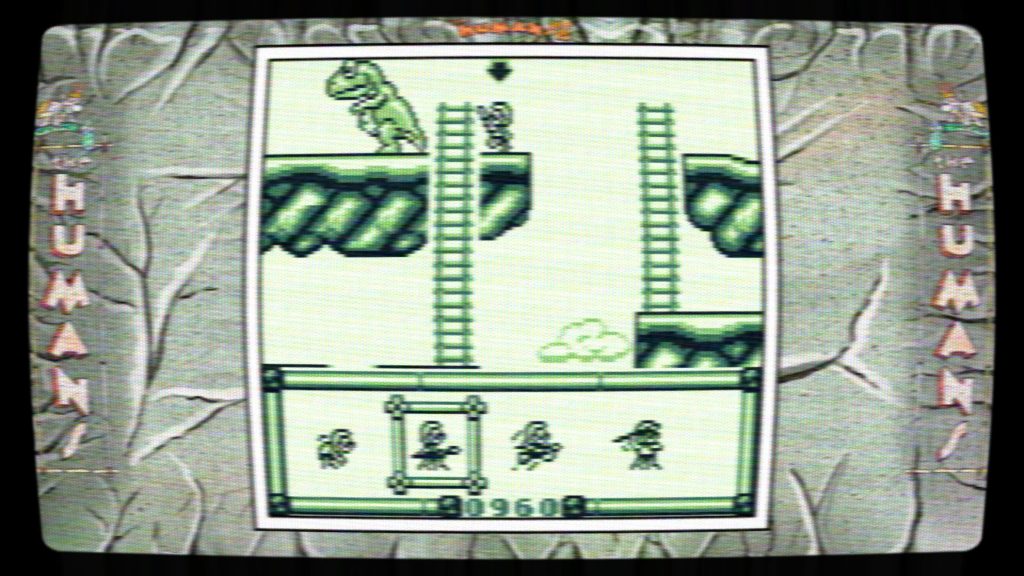 However, the ‘Alt 16-Bit’ version was much better with more intuitive controls (albeit still slightly fiddly), a better screen aspect ratio and alternative graphics that we preferred over the PC version.  This is the Mega Drive port apparently and was actually quite enjoyable to play.  However, with 79 levels you’ll either be pleased with all that content or bored to tears by it all.  Luckily, all versions have a passcode system to allow you to get to whatever level you want.

But there you go.  The Humans is an odd choice for a port job given how utterly outshined it was by Lemmings.  We’re not sure who it is for but it gets a decent treatment here.  Aside from the aforementioned quick save system, we also appreciated all the screen filters (and Game Boy colour options) and the option to redefine the keys.  We’d have loved to have seen a tutorial added or at least an electronic version of the original menu because this is a very tricky game to figure out initially.  But hey, if you’re a fan, you’ll love it and if you really like retro games, The Humans makes for an interesting curio.

The Humans
6 Overall
Pros
+ Game Boy version is a nice inclusion
+ Decent level design
+ Quick-saving is a necessary addition
+ Plenty of content
Cons
- The controls are really fiddly
- Progress can be ended unfairly
- Time limits objectively make the game less fun
Summary
The Humans is a decent port of a fairly obscure retro puzzle game and it's given a very respectful treatment here with the PC, Mega Drive and Game Boy versions all included. However, it can test your patience with some unforgiving levels and controls that will most likely frustrate anyone who attempts to play it but with a lot of patience and concentration there is fun to be had here.