Missile Command: Recharged is an updated remake of Atari’s classic 1980 arcade game.  Essentially a shoot ’em up of sorts, Missile Command was a single screen blaster where you defended your city from incoming intercontinental ballistic missiles using missiles of your own.

It was a brilliant game, probably Atari’s best in our opinion.  The simplicity of the idea matched with the efficiency of the game mechanics meant that it was very much a game where skill and hand-eye coordination were key and, unlike many coin-ops at the time, you could theoretically play forever on one credit if you were good enough (the world record is 56 hours) which does indicate a certain ‘if you die it’s your fault’ factor to the game. 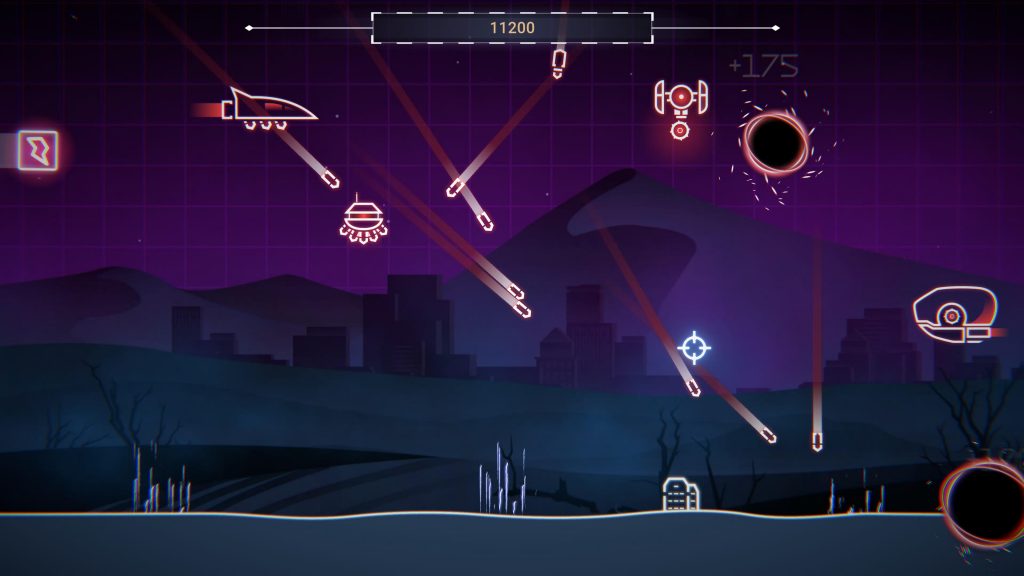 The game, of course, had plenty of home ports (and even more clones) and updated versions.  One of these was Missile Command: Recharged in 2020, the title that launched Atari’s Recharged range (we’ve reviewed their updates of Yar’s Revenge, Breakout and Gravatar from the series) and this game is the 2.0 version of it.

As ever though, the main gameplay mechanic remains.  You control three missile silos that have to protect the city below from incoming missiles.  You aim a cursor with the left stick and have just one fire button.  The silo closest to your cursor fires the missile but, of course, any or all of the silos can be destroyed by enemy turrets.

The trick with Missile Command is, as it has always been, to aim at where the enemy missiles are going to be, not where they currently are.  Your missiles have a degree of travel time and so what you want is for enemy missiles to get burned up in the blast radius.  Reading about it is more complicated than just doing it and thankfully this version of the game is just as intuitive as the original. 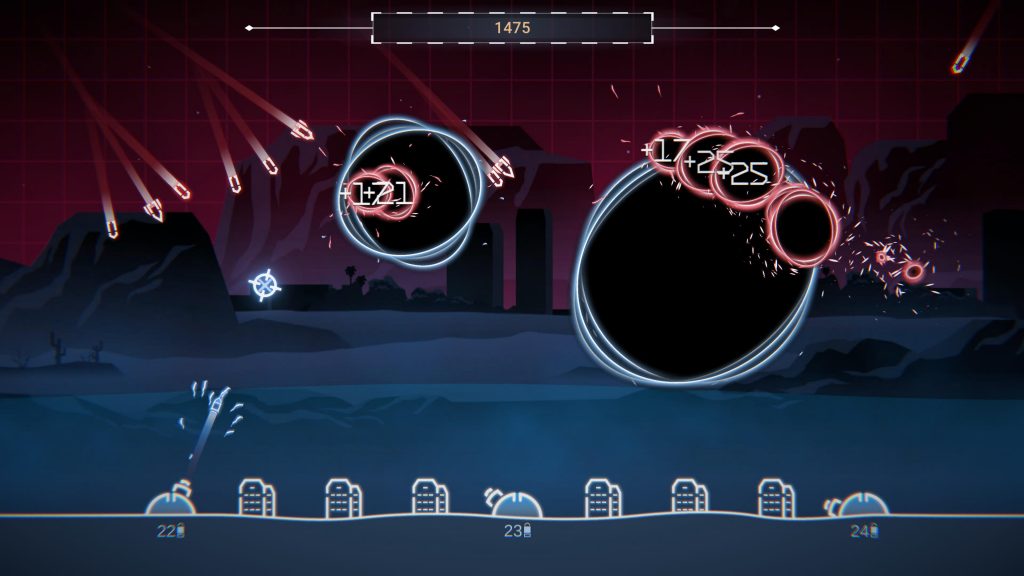 Recharged adds new enemy types and also temporary power-ups which can give you larger explosions, quicker shots, screen clearing explosions, a quick anti-air barrage weapon and a shield.  You’ll need them too as you are thoroughly outgunned in this game.

There are two ways to play Missile Command, both the original and this version.  You can either try to be a sniper about it, efficiently clearing out threats one at a time, or you can just spazz missiles all over the place.  Neither tactic is solely the answer but you’re sure to find your own level while playing the game and, like any good arcade game, you do get better at it over time. 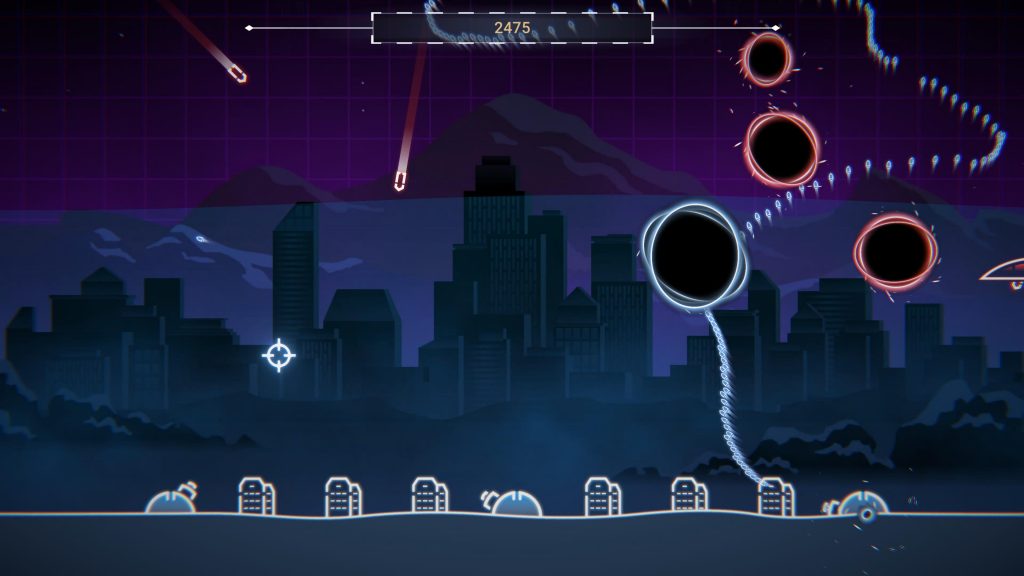 Aside from the ‘arcade’ mode which is an endless battle to survive against more and more enemy projectiles, you now get a campaign mode with 32 levels.  The idea here is just to survive, although there are score bonuses involved, and try to get to the game’s new end boss.  These levels are okay (although they do get pretty difficult) but we preferred the arcade mode, mainly because it lets you earn permanent upgrades to your blast area size, reload speed, city regeneration and missile velocity.

The controls in either mode are good enough.  The original arcade game used a track ball, which was as close as you could get to a mouse on an arcade cabinet, and home conversions ever since have never quite matched up because of joysticks and gamepads not feeling quite right but that can’t be helped here and the game’s still playable no matter what. 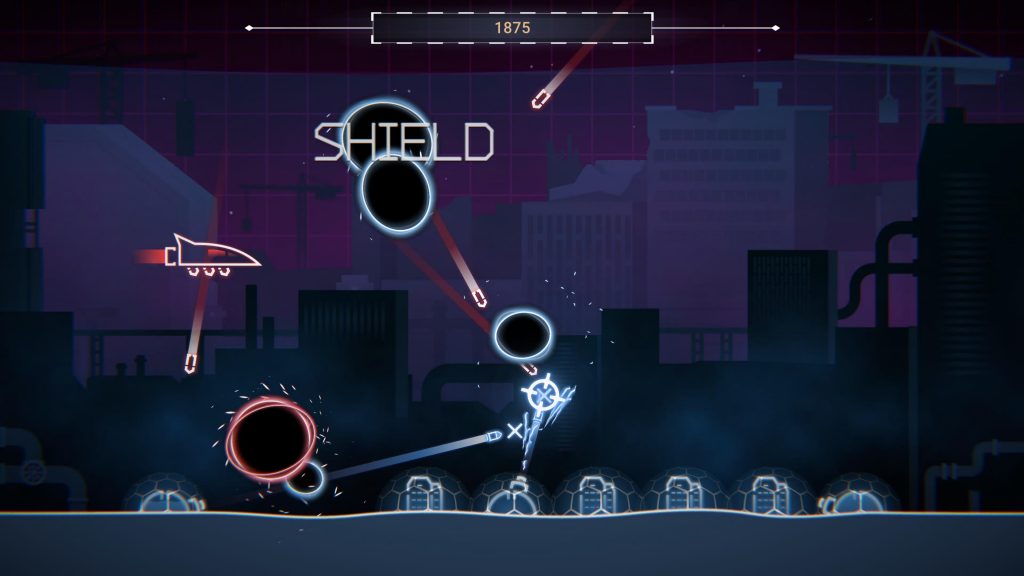 The updated presentation throws in some decent synth music and overhauls the visuals.  We’re not huge fans of the Recharged series’ minimalistic visual style though and do tend to find it a little drab and featureless.   It’s okay but isn’t exactly eye candy or exciting but it does ensure that the gameplay is clear at all times.  There are no surprise deaths in this game, you can always see where imminent death is coming from.

Overall this is a nice enough update.  The new challenge mode gives the game a bit more longevity, the soundtrack adds some appeal and, of course, the timeless gameplay still shines through.  It’s not the most exciting shoot ’em up on PSN but it’s a decent take on a classic nonetheless.

Missile Command: Recharged
7 Overall
Pros
+ The classic gameplay shines through and still works well
+ Arcade mode is enjoyable and the upgrades make it quite addictive
+ Challenge mode adds some longevity
+ New soundtrack is decent
Cons
- Quite repetitive
- Can get a bit too difficult
- Controls are slightly stiff
Summary
Missile Command: Recharge is a good update of the coin-op classic and its 2020 remake. The new challenge mode gives it bit of lasting appeal and the new presentation gives it a fresh coat of paint. It's not the most dynamic and exciting of shoot 'em ups but it still offers a substantial challenge to veteran arcade fans.