A Plague Tale: Requiem is a stealth-based adventure game from Bordeaux-based coders, Asobo Studio and is the sequel to the original 2019 title A Plague Tale: Innocence.   This is a direct follow-on so it’s worth recapping what the original game was all about.

In Innocence you played as Amicia de Rune, a 15-year old French girl of noble descent who lived with her brother, Hugo, and mother, Beatrice.  Her mum was an alchemist who was working on a cure for the mysterious illness that was ailing Hugo.  However, that wasn’t the only problem.  The first was the hordes of rat spreading ‘the Bite’ (essentially the black plague) and the second was the bastard English who were invading as part of the Hundred Years’ War. 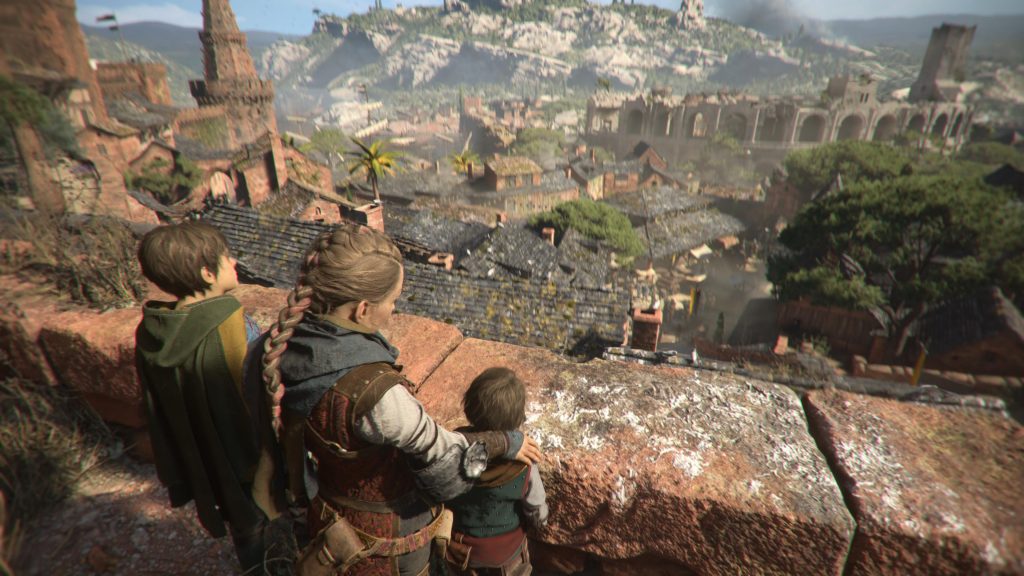 As for Hugo, it turned out that his blood carried a supernatural evil called the Prima Macula, a sort of disease that afflicts noble people causing the carrier to get sick and have terrible dreams.  However, when the host is cornered, it turns out that it can be a source of great destructive power.  And, just to top it off, can let you control rats too.  Very handy given the setting.

Anyway, Amicia, along with an alchemist’s apprentice, Lucas, had to find a way to help Hugo, somehow avoid getting chomped by rats and also battle Vitalis, the game’s big bad who was set on taking the Prima Macula for himself.  And, as you can expect, they do a pretty good job of all of that which then allowed them to eventually leave in search of somewhere new to call home.

That’s where Requiem picks up the action.  It starts out with Amicia, Lucas and Hugo playing in the woods, which acts as a way for you to familiarise yourself with the game’s movement, stealth and sling-shot combat mechanics.  However, it’s not long before they find a castle that’s absolutely rammed with dead bodies.  After getting caught there, Amicia and Lucas (who are still kids) inexplicably get blamed for some of the carnage and so you have to escape while keeping Hugo safe. 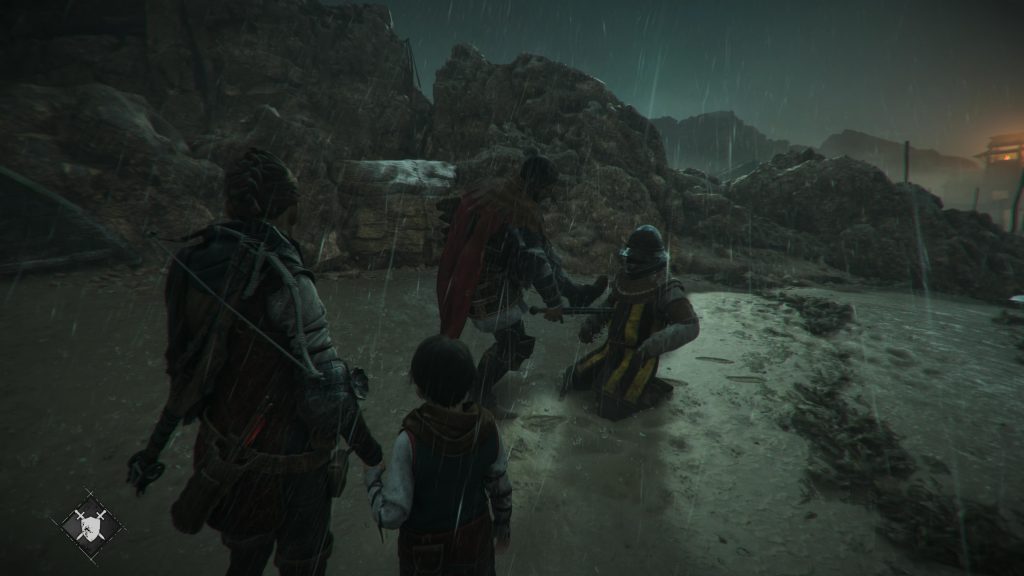 This involves using your stealth capabilities as well as throwing items as distractions and weapons.  However, things soon escalate when the people hunting you set fire to the field of long grass that you are using for cover.  It’s at this moment where Requiem tells you something.  This isn’t some little indie effort.  This game looks and feels, dare we say it, kind of triple-A.

We’re suckers for a good set-piece and when you’ve got the fire raging across the field and people searching for you, it all comes together.  The visuals, the gameplay, the violence.  It’s all very much at odds with the cutesy feel that the tutorial gives you where Amicia is clearly a great sister to Hugo because even at her young age, she’s ready to crash skulls.  The game initially feels like Ico but eventually is more like a Tenchu (although certainly not as bloody). 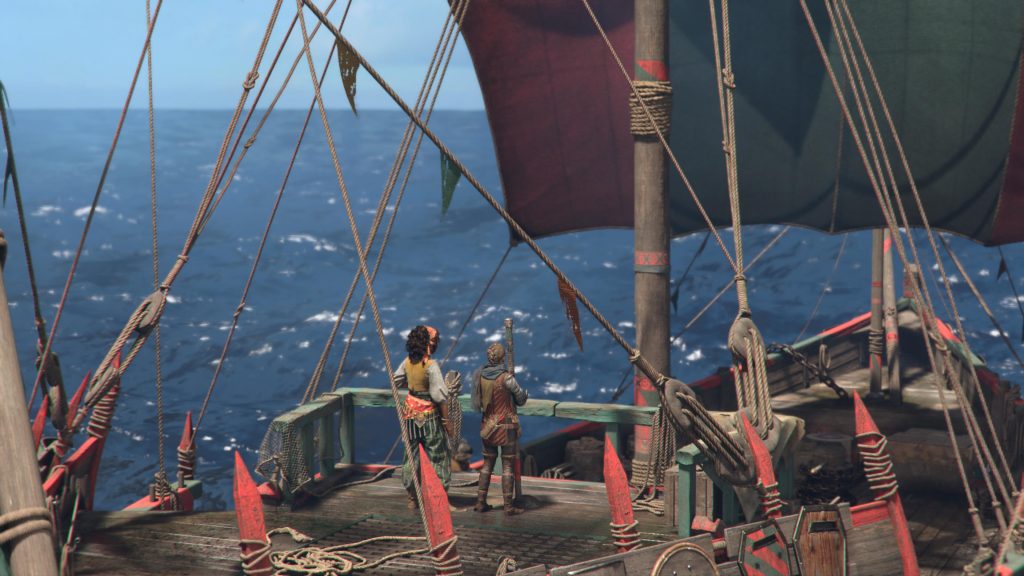 Amicia is an interesting character to play as.  Fundamentally, she’s pretty weak.  Give her the element of surprise and she can take out a solo enemy reasonably easily, either at range with her slingshot or with a stealth attack from behind.  In a fight, she can counter attacks (it’s like a simple QTE) and get the upper hand but if she gets hit, she’s in trouble.  We do like stealth games where there’s a bit of consequence to being spotted, so this all feels well-balanced.  Well, apart from those counters as there’s no way a 15 year old is taking out a fully armoured enemy in melee combat.  But whatever.

As the story progresses that old favourite game mechanic of the series, the waves of rats, also become a factor.  Aside from being quite scary to witness, with the rats coming in huge numbers to overwhelm anything in their path, this also creates some interesting puzzles.  Your only defence against the rats is fire, so you need to figure out how to get from a safe point to the next safe point using it.  Torches can be lit as a temporary form of protection or you can light larger fires to secure an area but you can’t ever take it easy in these situations.  It’s dramatic and genuinely engaging, as well as looking great. 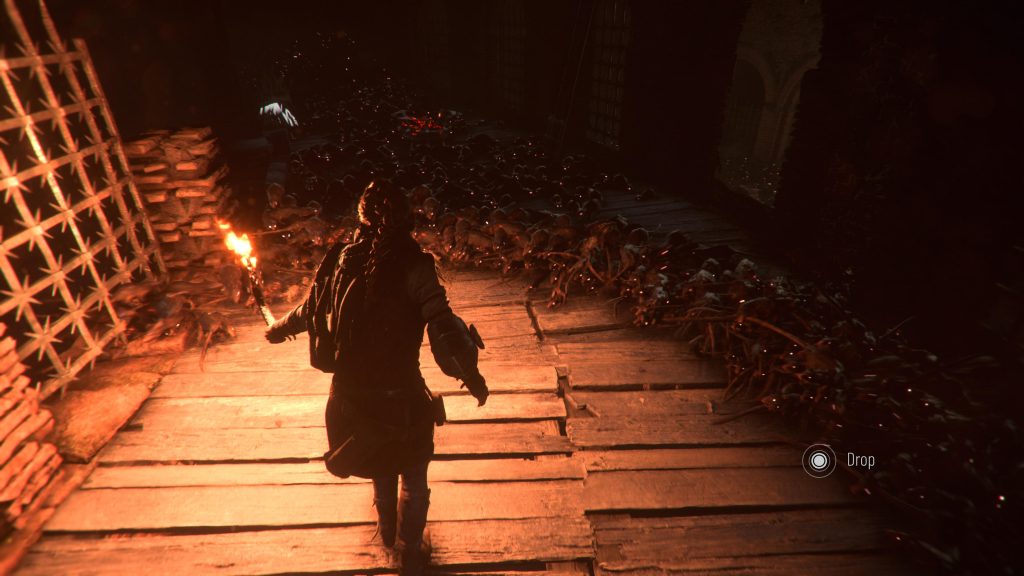 Clocking in at over 15 hours, Requiem is a bit longer than Innocence but rewards you along the way with a well-written, and performed, story (although the French kids sound like posh English kids and Hugo can very occasionally get on your nerves) as well as some top notch presentation.

Asobo Studio once created the little-known Xbox 360 racing game Fuel.  It was a game predominately about driving across the country in various vehicles but shone because of its atmosphere, letting you take time out to watch the sun set or having you drive through the embers of an extinguished forest fire.  It was a driving game with a soul. 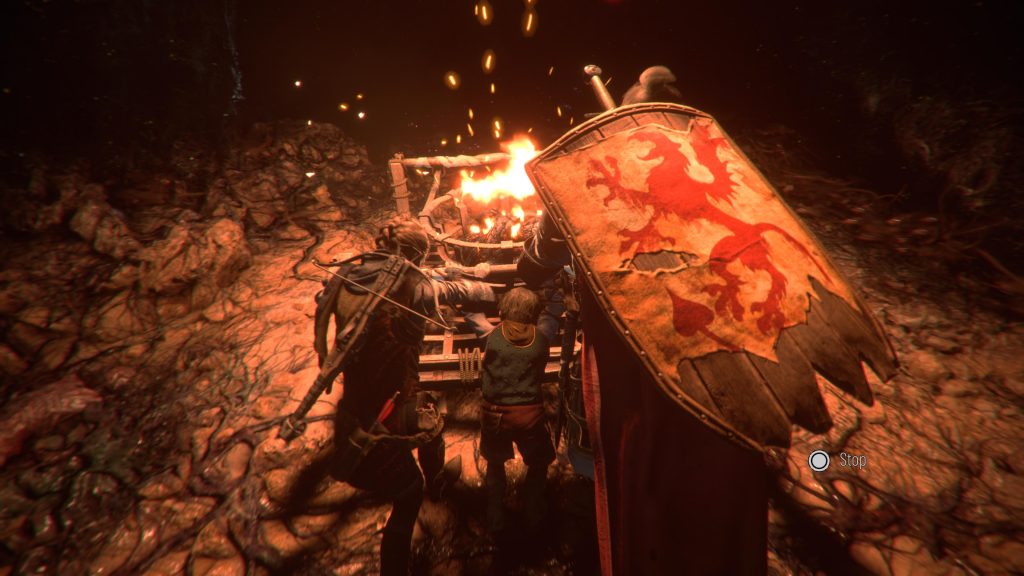 Well, soul is what Requiem has.  It just has a way of showing you beauty in what is a horrific war-torn and plague-riddled land.  Even though you feel every muddy step, every rat infested location the sun still shines as do the graphics generally with in all their lovingly-rendered detailing.  This is a game where every once in a while you just need to stop and take it all in.

So, overall we’re very impressed with A Plague Tale: Requiem.  When you review as many indie games as we do here, you develop tempered expectations for games, especially sequels to lesser-known ones.  But this game has come along with a strong story, a likeable main character, a game world that is terrifying at times but rooted in reality and absolutely great visuals.  The stealth-based gameplay is likewise entirely engaging and when the game needs to step into more violent situations, it doesn’t hold back.  A Plague Tale: Requiem is something of a gem.

A Plague Tale: Requiem
9 Overall
Pros
+ The stealth gameplay is tense and well-balanced
+ Excellent visuals
+ Strong story and characters
+ The game world feels very real
Cons
- Hugo can occasionally be a little irritating
- Character and tool upgrades are a little underwhelming
Summary
A solid stealth-based adventure set in an incredibly dark and hostile world but one that can also be beautiful. A Plague Tale: Requiem is a stunning game.

One thought on “A Plague Tale: Requiem – PS5 Review”