From Belfast-based dev Level 91 and publisher PQube, comes Inertial Drift. A twin-stick driving game “set in a 90’s retro future.” So the future? Or the past? We’re confused. The influence of a particular manga / anime series with Japanese cars and drifting couldn’t be any clearer if we scrambled the letters to give ourselves an anagram of the title.

The press section on the website states: “The handling properties of cars are influenced by the application of throttle and brakes, with each car reacting in a unique way. This makes each car a new puzzle to explore and master.” This might be a wonderful idea to mix it up a bit, but when it makes hopping from one car to another a huge pain in the arse, you have to wonder why. 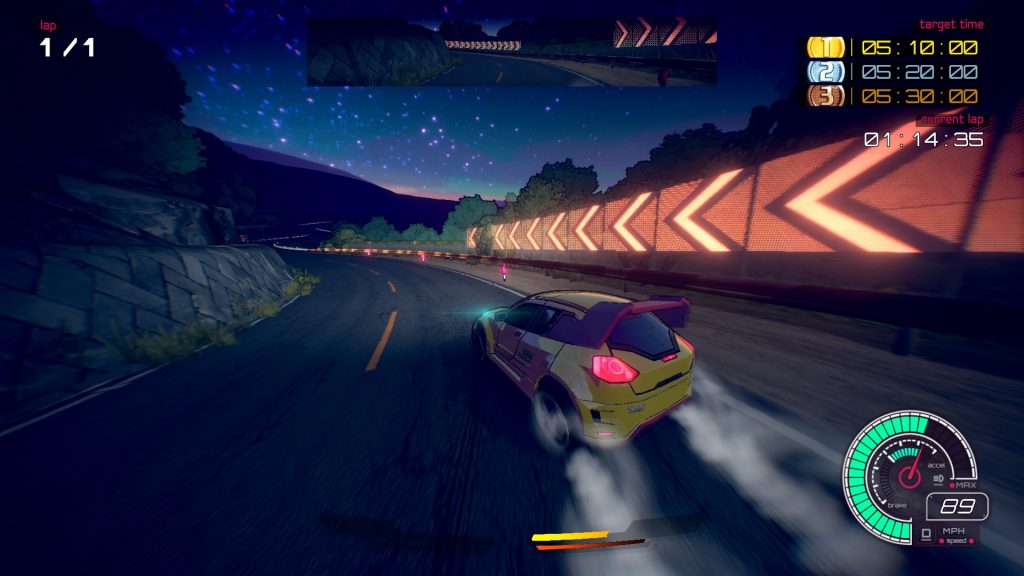 Subsequently it takes a fair adjustment period to go from one vehicle to another, especially when going from a tail happy drift machine to a fast racer. It all feels a very counterintuitive. Eventually it clicks to some extent but it feels like a barrier to entry.

The main meat on the bones here is via the story mode for each character. These are interspersed with still images with weirdly stylised characters telling a story. We found ourselves skipping through pretty quickly as it all seemed a bit superfluous to us. You’ll take part in the various  events as you progress, ranging from races to ghost challenges to straight time trials. Unfortunately this is where Inertial Drift falls  down a bit. You’ll struggle to win any events, never mind setting a decent time on a time trial. 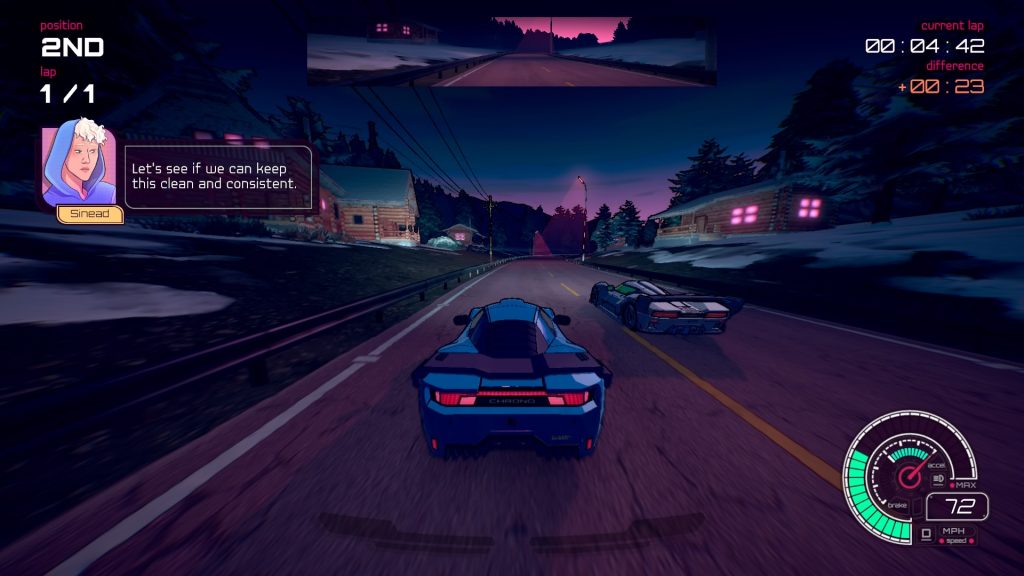 Yes, we get that the devs intend you to practice a track over and over to get familiar with it, but when some of the tracks in question are imbued with as much personality as a member of the Young Conservatives, it gets very dull very quickly. Not to mention the one course that feels more like a track from the North West 200 motorcycle events. That may be a little shoutout from the Norn Iron based devs, but it feels like an odd location to be drifting a hatchback.

While we’re on the subject of the time trials, it would be nice to have splits a bit like the sectors on an F1 lap or during a Tour de France TT. Some kind of indicator as to how you’re doing other than your final lap time would be welcome. 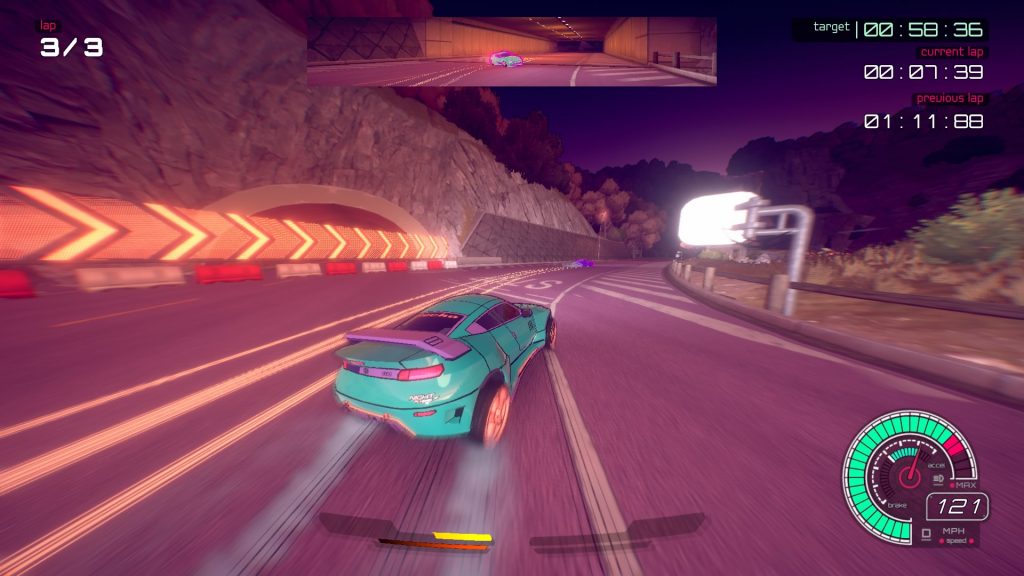 Another race format we’ve yet to succeed with is Duel. In theory, you and your opposition should be swapping positions and scoring points while you swap the lead. The reality is more your opponent tears off into the distance and you’re waiting until you lose. It’s a real disincentive to even bother if we’re honest, the only impetus being that you’ll continue with the story anyway.

Style-wise it’s all neon and cel shaded looks, but has a distinctly low-fi feel to it. Perhaps a shortcoming of the Unity engine, we can’t help but wonder how ID would look in, say, Unreal Engine.  One little detail we liked was the persistent red light trails. We saw them disappearing into the distance rather more often than we’d have liked admittedly. We got a Ridge Racer Type 4 vibe from it anyway. 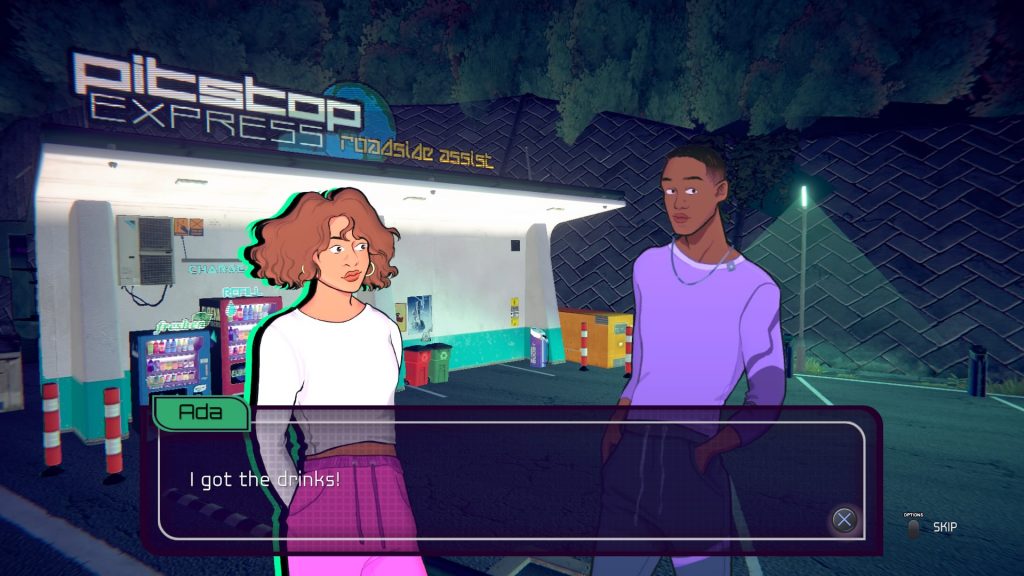 One thing that can bring a story playthrough to a grinding halt is the requirement to hit an arbitrary time trial target. This is due to the fact that the other race types let you through with a second place, yet the TT has no such allowance made. Combined with the gripes we mentioned regards the time trials, it’s not so much a road block as a concrete wall that halts progress altogether.

You can unlock additional cars by completing challenges in a separate menu. They’re made up of the same race modes you’ll encounter, but the difficulty is very much dialled down. It’s the smart way to get the trophies for winning particular event types, but has us pondering why the story mode targets for TTs are so strict. 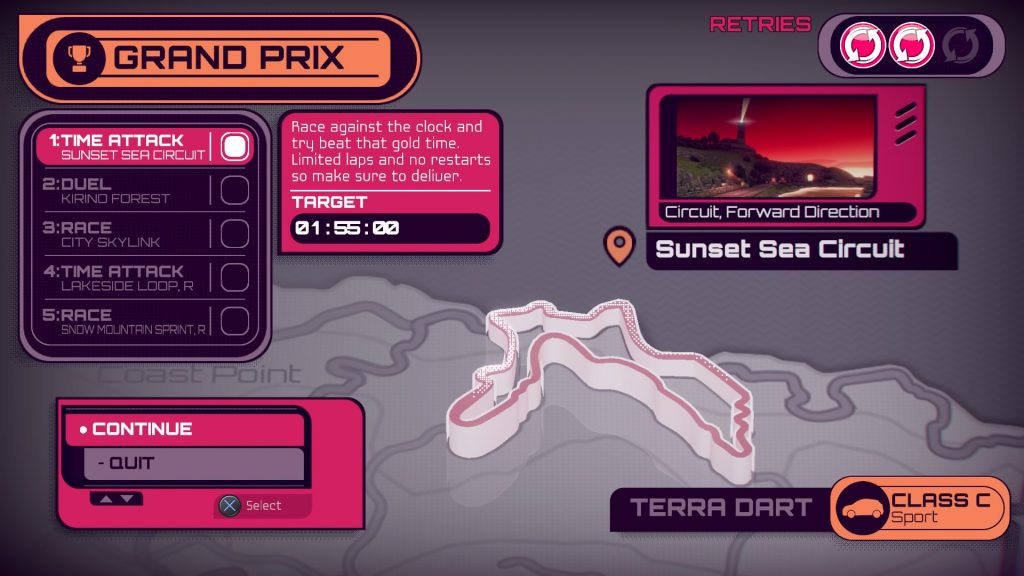 There’s a drift challenge mode too, but it’s frustratingly oblique as to how it scores. As far as we can tell, you get additional points from driving really close to the kerb and hugging the line of a corner with a drift. But being penalised arbitrarily with a point deduction as well as a freeze in earning additional score can often be the difference between reaching a points target or not, especially on a shorter course. Goodwill is soon eroded anyway.

There’s also Grand Prix mode to play, but given you only get three retries, it’s very much a race series to attempt once you master all the other modes. We struggled at the very outset due to our old friend, the time trial. You’re probably picking up we’re not really a fan. 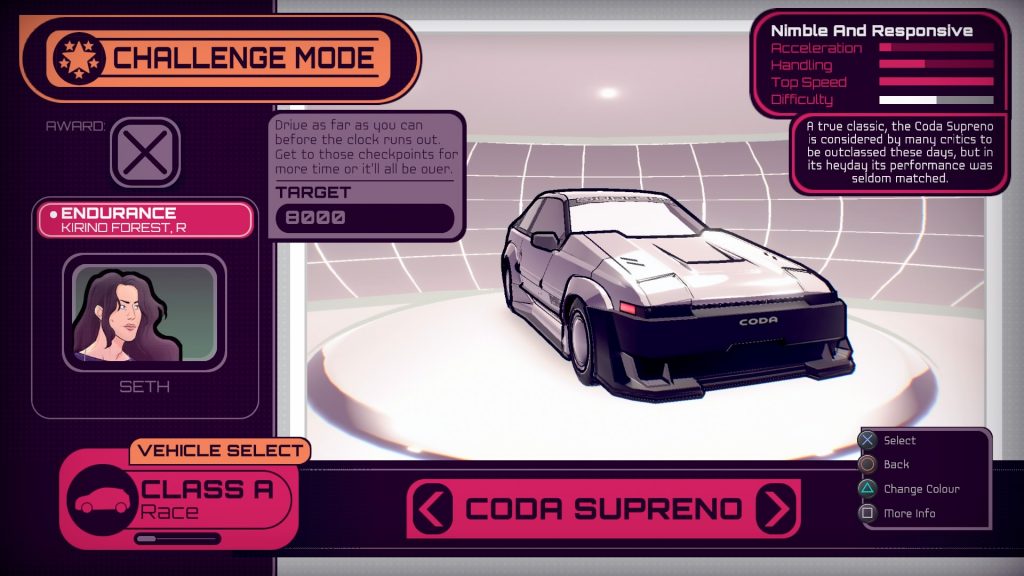 Ultimately we have to wonder if you’re going to be that obvious with your homage to the adventures of Takumi and Itsuki, why not go all in? If you’re going to make a drift game, then make it a drift game. If you’re aiming for an Initial D vibe, knock yourself out. Go with thinly veiled ciphers to the AE86 Trueno, the Evo III GSR or an RX7. Going with weird cars that look like something out of Demolition Man doesn’t work, regardless of the similarities to the real world cars.  Have it scored with a cheesy Eurobeat soundtrack as opposed to generic electronica.

Our main problem with Inertial Drift is that it doesn’t quite know what sort of racing game it wants to be. Either it’s an out and out racer or a drift happy showreel. It is during these latter moments that the game is at its best, but sadly  those are all too fleeting. Perhaps you’ll get past the idiosyncracies and really enjoy it, but for us, we didn’t get out of first gear with Inertial Drift.

Inertial Drift
7 Overall
Pros
+ Without resorting to MAME, this is the closest to an Initial D game we're likely to get in a home environment.
+ Stylised graphical look is quite fun
+ Some great ideas for alternate race modes
+ Even if you stall in story mode, there's plenty on offer

Cons
- Difficulty balance is way off in story mode.
- Actually boring at times,  time trials are especially dull
- Suffers from a split personality in terms of what it wants to be
- Music doesn’t fit the mood. Generic electronica doesn't work
Summary
Inertial Drift is very much inspired by the anime / manga with the very similar name, but falls down a little in execution. The difficulty in story mode feels out of sync with other modes. Not that you can adjust difficulty. Maybe you'll dig it, but we didn't particularly.