Heidelberg 1693 is a 2D action platformer from Andrade Games who we became aware of when we reviewed Sturmfront: The Mutant War which was a wild top-down shooter in the vein of Total Carnage (itself a successor of sorts to Smash TV).  It was a good looking game that was absolutely stuffed with action and was a lot of fun.

Well, Heidelberg 1693 is set in the same universe apparently but where Sturmfront was in an alternate 1984 where a plague had caused mutants to attack humanity, this game is set in 1963 (naturally) just as a breakout of the undead is threatening the quiet German town of Heidelberg. 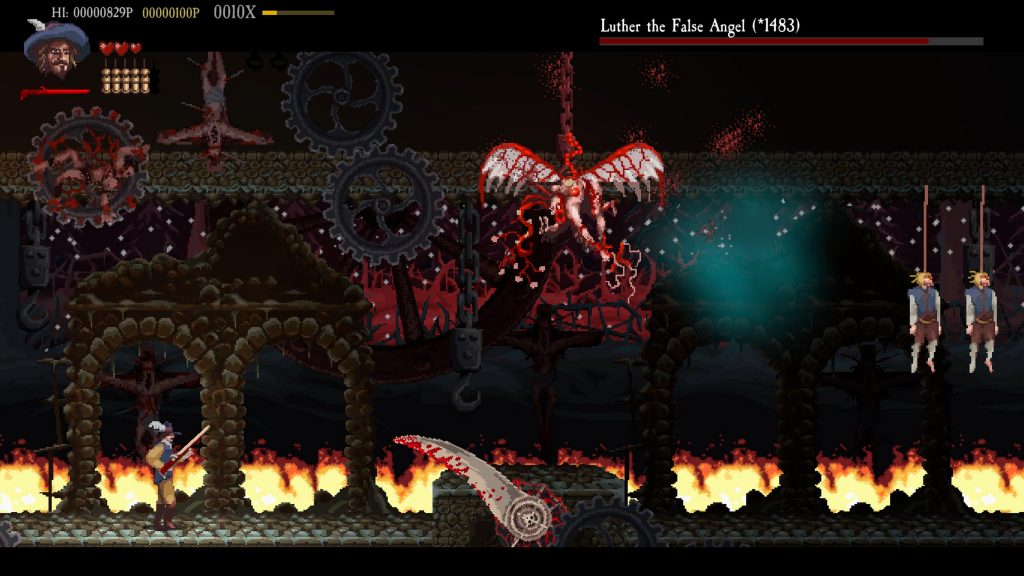 You play as a French musketeer who has to take on the Moon King who is resurrecting the dead for reasons unknown but we’re pretty sure none of them are good.  Starting in France, you have to battle your way through to Germany and put an end to his plans but getting there is going to be no joke.

As a musketeer, naturally you’re pretty handy with a sword and you’ll be using that to handle most of your business in the game.  Thankfully, it’s pretty slick to use and you have some nifty moves that let you use jumping spin attacks and diving ‘death from above’ ones in order to take out enemies from all directions, as long as they are within range.

It’s a great weapon but completely at odds with your musket.  This single shot firearm can take out enemies at range but it’s cumbersome, takes forever to reload (leaving you entirely vulnerable) and is tricky to aim which you’ll do using the right stick.  However, between those two weapons, you’d like to think that you’ve got all ranges covered. 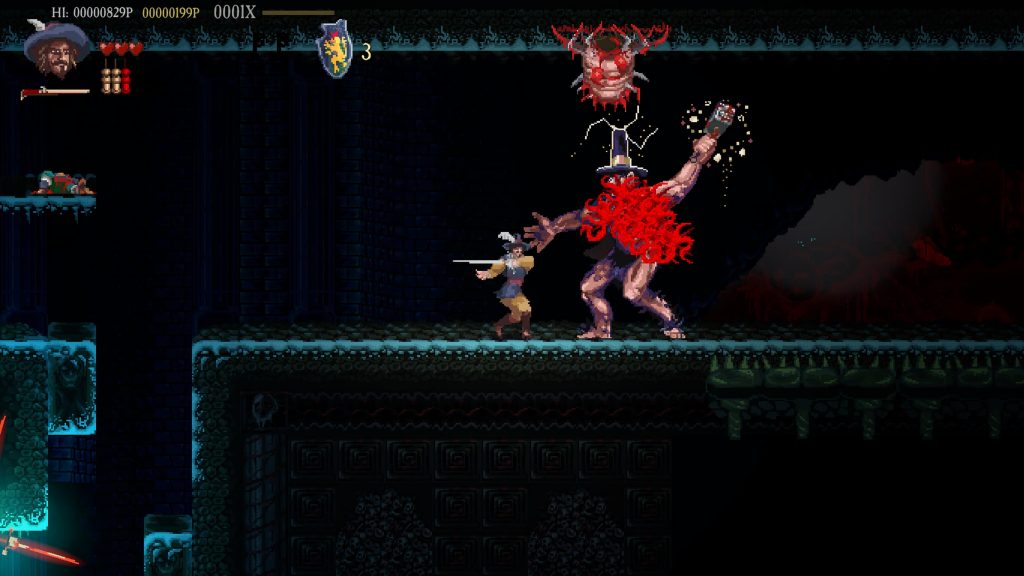 Your problem is that pesky invasion of undead bastards.  Initially they seem almost harmless, shambling along just waiting to either bit picked off by your sword or, better, they’ll even kill each other if they get too close.  So at first you’ll be mostly be admiring the cool graphics and music.  Don’t get comfortable though as Heidelberg 1693 isn’t messing around.

Before long, you’ll find yourself in the first of many difficult situations.  Suddenly enemies are more dangerous or positioned in ways that makes them hard to get at.  Ranged enemies will start showing up and making your life a misery, floaty skull things will chase you around the place and, just for shits and giggles, dead enemies don’t really stay dead unless you double tap them and that can be difficult because ammo is scarce. 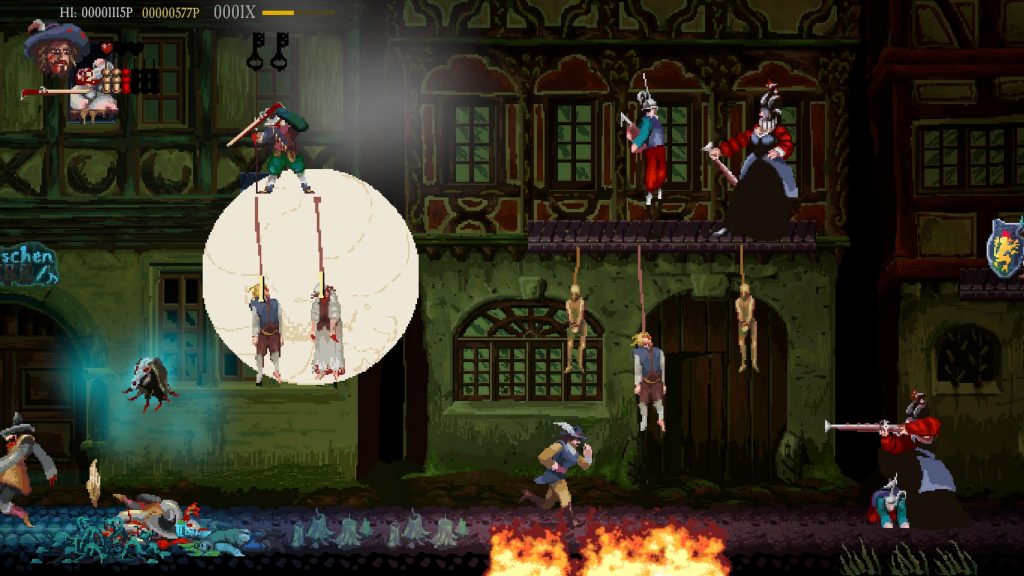 In a game where speed isn’t exactly afforded to you, enemies that can appear quickly or attack from range are an issue and that’s especially true when there are lots of them and so you’ll start racking up deaths.  Unlike arcade games like Ghosts ‘n’ Goblins, which is clearly an influence here, there isn’t a traditional lives and continues situation.  You get to keep retrying as much as you like but when you die you will go back to the previous checkpoint.  They’re not obnoxiously far apart but getting to the next one can be very difficult.

On the very worst sections, it can feel as though things haven’t been designed particularly well.  Enemies will cancel each other out as if there was no point them being there, while combined ranged threats make it very difficult to survive certain situations but in a way where you’ll take ten or more lives figuring it all out.  That’s fine but when it represents a weirdly out of place difficulty spike, it makes you wonder about the playtesting.  Even entire levels can be much harder than those that follow them, so there are definitely some issues there. 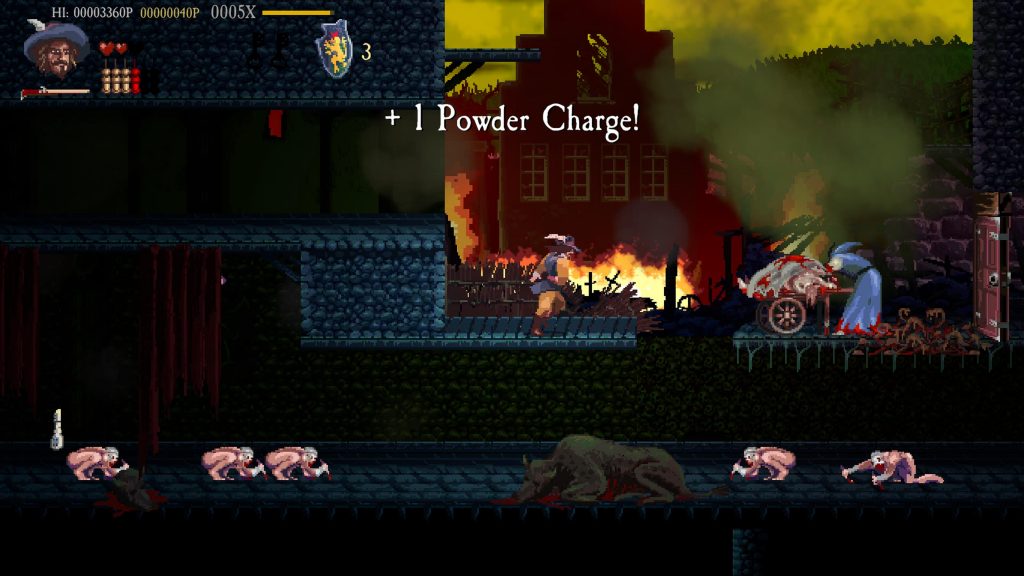 And then you’ve got the bosses.  On the plus side, these are big and gruesome and, also, historically er… well, not accurate but they are based on real historical figures.  That said, we’re not sure that the real Count Johann Wilhelm was actually a tentacle beast who lived in a tree.  However, as you can imagine, these boss encounters are absolutely no joke and can seem savagely difficult at first.  They also have the effect of really taking the wind out of your sails when you’re feeling good about finally beating the section before them.

With that said, for all of the issues we have with Heidelberg‘s difficulty, there is a real sense of satisfaction when you pass a tricky section.  If you can get past a difficult enemy layout while making the most of those somewhat limited controls, you’ll definitely feel happier and knowing that once a level is beaten, you can restart from it whenever you want definitely makes finishing them feel rewarding. 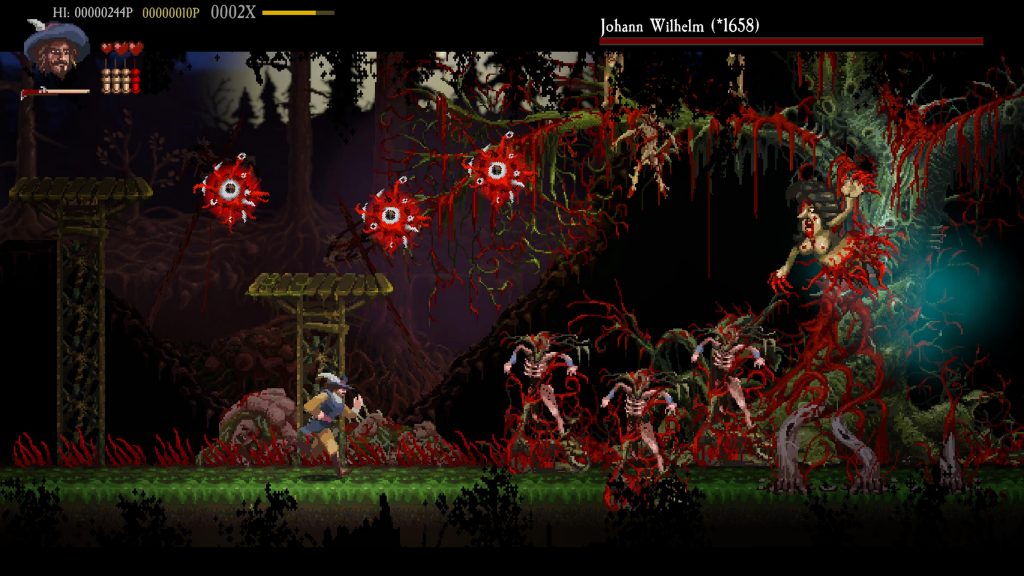 Another plus comes in the form of Heidelberg‘s notable presentation.  Sure, we’re quick to criticise the over-use of pixel art visuals but this game does that smart thing of making a game look old-school but in a way that would have killed any SNES that tried to run it.  The graphics here are detailed and inventive and the animation is quite nice too.  We’ve never seen a 2D game look quite as gruesome either.  This is all backed up with a solid and beefy soundtrack too.

There are times where we wish we could just play through all this visual craziness on some sort of easy mode though and we’d have liked some sort of voice acting on the storytelling parts as these become a little bit tedious.  The gameplay however definitely isn’t boring and it does feel like there are new challenges around every corner rather than everything being cut and pasted across the game’s lifespan.  I think, for us at least, this is a game that will inspire love and hate.  Thankfully though, its crazy enemy designs and darkly beautiful settings give you just enough eye candy to go with the harsh challenge and sometimes that’s enough for us.

Heidelberg 1693
7 Overall
Pros
+ Sword combat is fun
+ Great visuals
+ Creative enemy types
Cons
- Ranged combat is enough of a pain to pretty much try to ignore it entirely
- Difficulty spikes are savage and oddly placed
- Boss battles can be miserable
- Story is drably presented
Summary
Heidelberg 1693 is a savage 2D action-platformer that gives you plenty of gruesome eye candy which hopefully will keep you playing when the difficulty spikes start to test you.