Gungrave G.O.R.E is a third-person shooter and it comes to us from Korean publishers Iggymob but under the supervision of Red Entertainment who created the original Gungrave in 2002.  The series went on to have a proper sequel, an anime series and a VR outing also but don’t worry if you’re not familiar with all of that as there’s a handy ‘History’ option in the main menu that has a good go at explaining it all (although it’s all a bit much to try to follow after a while).

For the uninitiated Gungrave, as a series, has you playing as Grave, or to give his full name ‘Beyond the Grave’ (as silly as that sounds, his pre-death and resurrection name was Brandon Heat which is somehow even sillier).  As with the first game you are tasked with taking down a cartel of villains who are manufacturing and selling SEED, a drug that somehow sells despite it turning users into mutants or something. 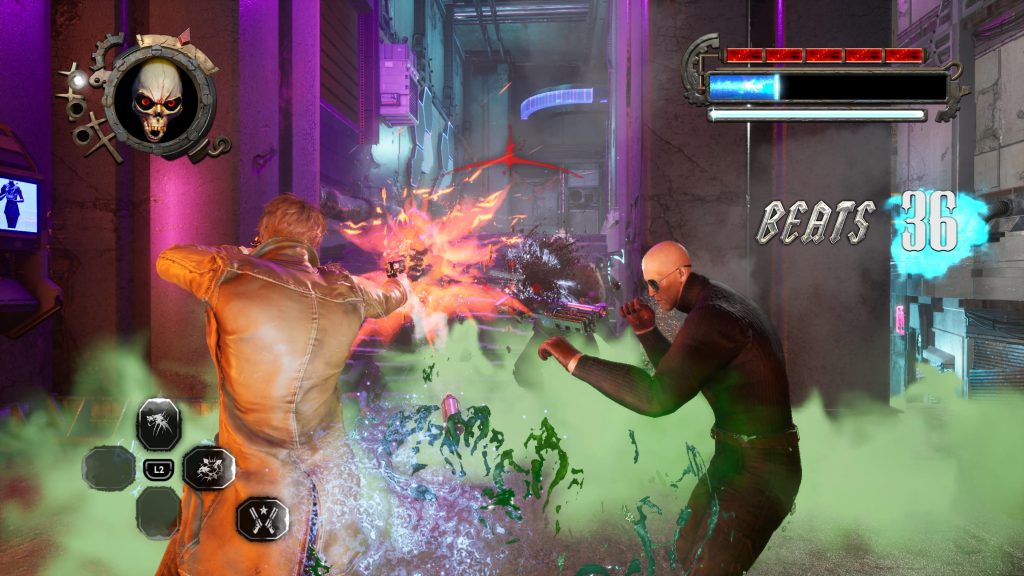 None of this particularly matters though so if you’re new to Gungrave, rest assured that this game is more about the insane action and gunplay than the story.  True to its roots, G.O.R.E is a linear double-A title, justifying its price tag with epic action but falling short of glory for several reasons.

Grave is an absolute tank of a main character.  Armed with two guns and a chain-mounted coffin (that doubles as a melee weapon and grappling hook of sorts).  You get drip-fed all of your abilities across the first handful of levels but eventually you’ll have a decent grasp of multitude of combat techniques that are available.

Predominately, G.O.R.E is a shooter and you’ll do most of your best work from distance.  It’s not super intuitive though thanks to two odd design choices.  The first is that you have a very strong and insistent lock-on that latches onto to targets with the zeal of an alien organism trying to absorb huskies in the Antartic.  It’s sort of helpful but does take away some agency from the player, although you can control lock-ons to some degree but that’s easier said than done when facing off with a dozen enemies at once. 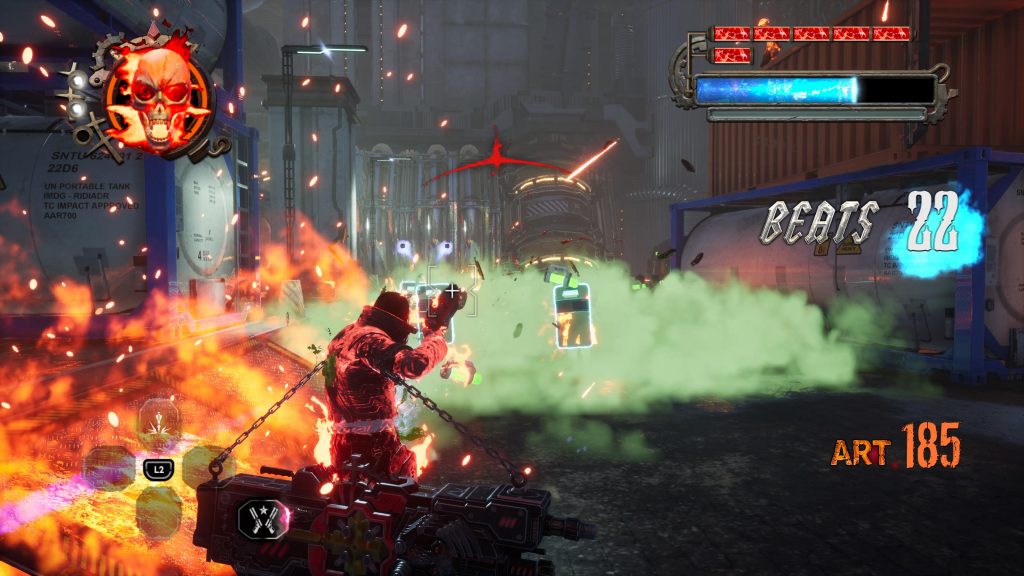 The other issue with guns is that you fire with the right trigger but one squeeze only releases four bullets before then converting to a charged attack.  This means that you’re hammering the trigger a lot, more than is comfortable.  On-screen tips advise you to get the timing down so that you’re doing less work but honestly this isn’t really viable and you’ll just end up hammering your way to arthritis.

Your coffin (it’s called a coffin but looks nothing like one and is to small to be one) is what you swing around during melee combat and this is fine, especially when combined with the dodge move, but doesn’t do enough damage to be your primary option.  Grave also has ‘demolition point’ abilities which you’ll need to build up to but then can clear nearby enemies or deal heavy damage. 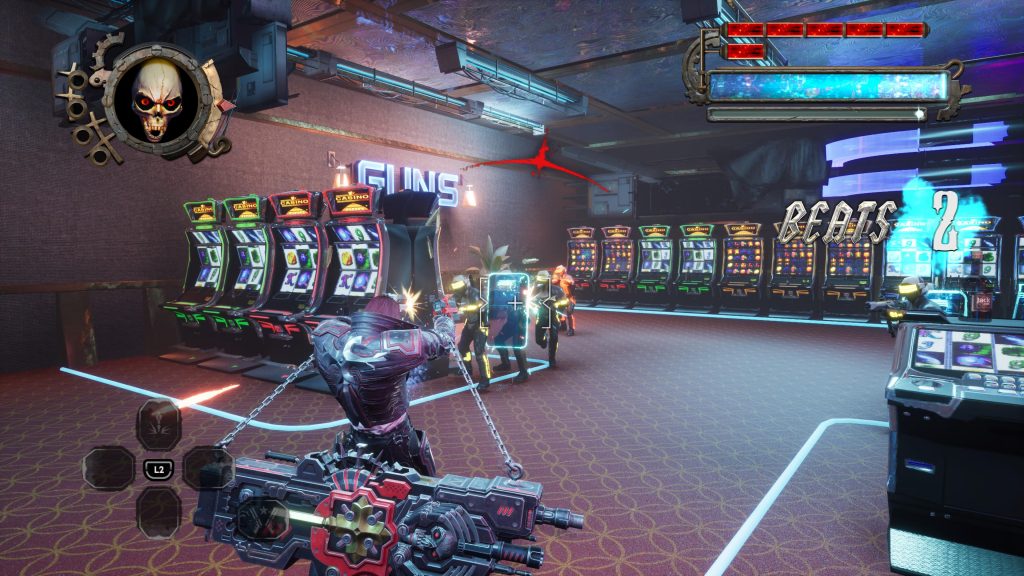 Switching between techniques and clearing out large groups of enemies is where G.O.R.E is at its best.  There’s a visceral thrill to beating the hell out of mutants and footsoldiers and its all presented with plenty of blood (which you’d expect, given the game’s name) so it all feels quite brutal and fun.  That said, Grave’s finishing moves felt a little flat, mainly as the perspective of the camera, and unnecessary graphical flourishes, kind of hide what is going on a bit.

For a while, G.O.R.E felt pretty good.  We got used to the aiming, started prioritising enemies and got used to our techniques and it felt pretty good carving our way towards the crime lords that were our ultimate objective.  However, things eventually soured and this was invariably whenever the game tried to do anything different. 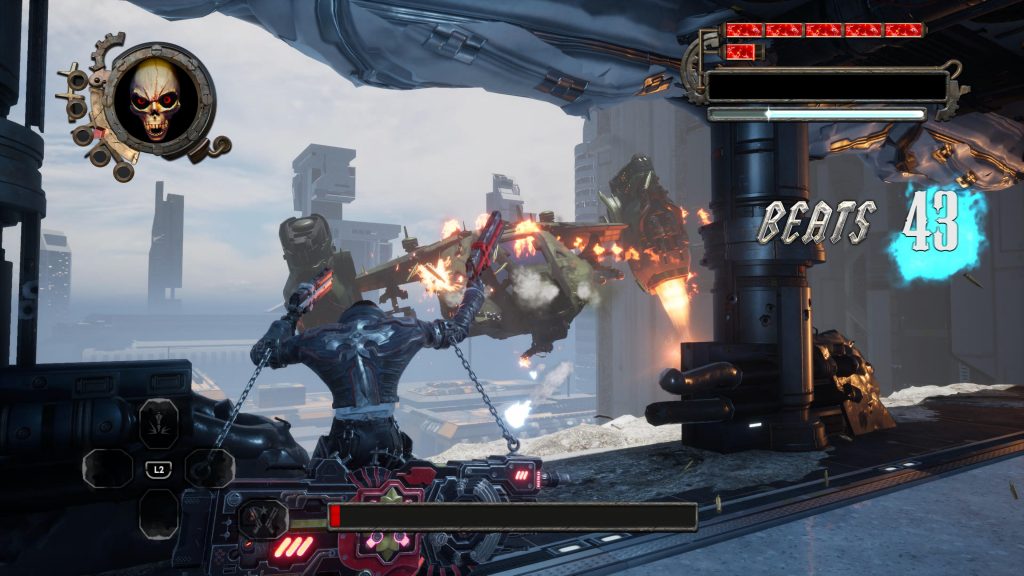 After five missions of fairly samey level layouts and cut and paste enemies, we were quite happy to find a level set on a train.  But little did we know that this level was going to be a massive pain in the arse, combining hidden time limit sudden deaths, the threat of falling to an instant death and really annoying enemy placements.  That took some beating and it wasn’t really fun.

The next level provided even more of a challenge when a time limit kept seeing us off, meaning that our usual semi-tactical play style just wasn’t working.  Annoyingly, when we did get past this section the exit didn’t open and we timed out again.  There’s a fair bit of that sort of jank and it’s pretty bloody irritating when it curtails a long-overdue successful run. 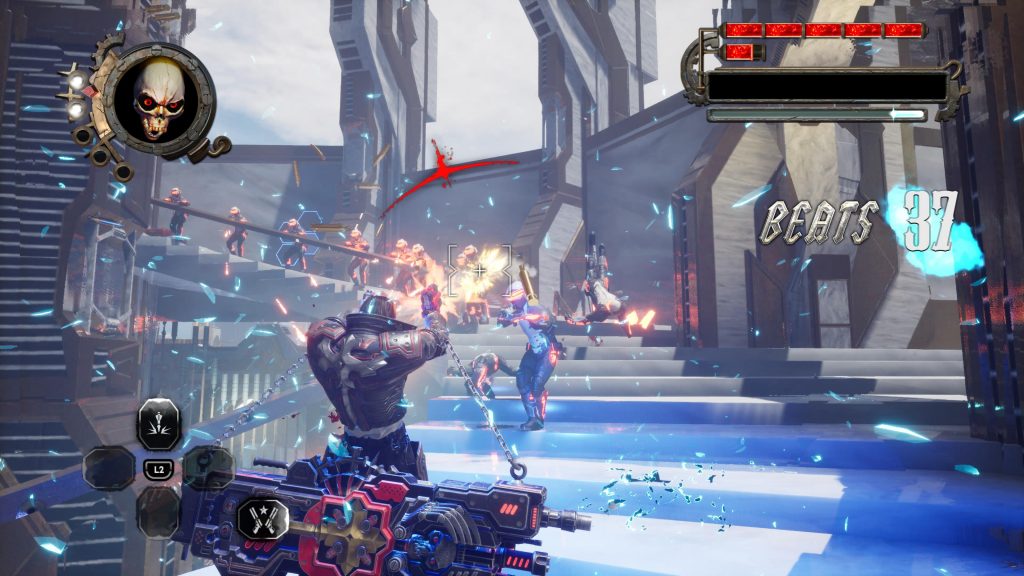 Eventually the difficulty got too much and we were forced to drop down to Easy which, unfortunately, was just a bit too easy for the most part.  There were many difficult sections before then though.   A level where you are being carried on a platform while rockets are launched at you and a section where we had to defend an area from just so many enemies.  It had already stopped being fun and at this point it was starting to get obnoxious.

Later on other sections, such as a bit where you jump from cargo containers that are suspended in the air, just made you wonder why these sections were even in the game.  However, in between these miserable difficulty spikes the core gameplay loop is actually fun. 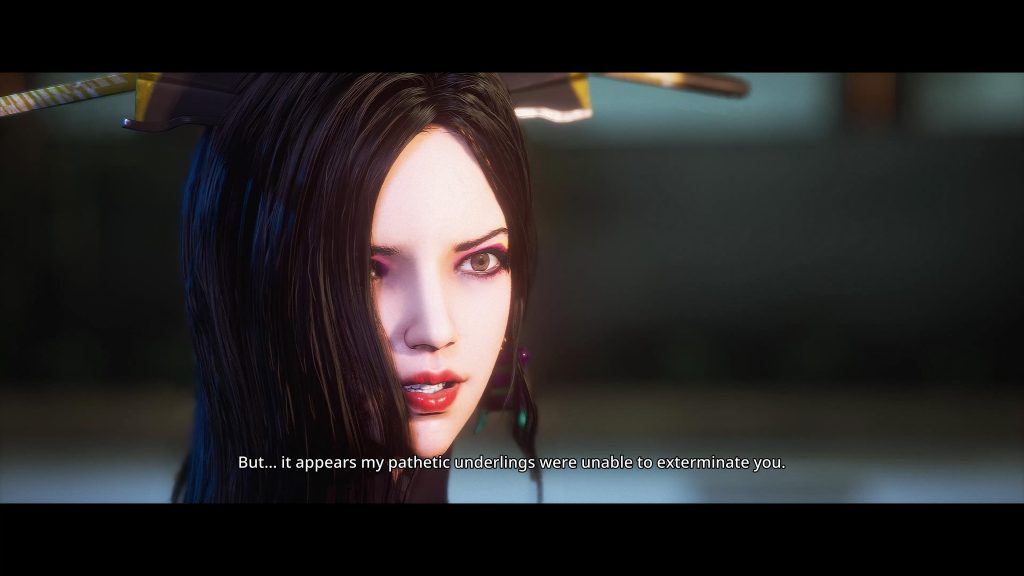 In terms of variation, the game does throw in levels where you play as other characters but one of those sees you playing as female character who is mainly a martial artist and between her lack of punching power, an influx of bigger enemies and awful platforming sections, we were pleased to see the back of her.

We did enjoy the game’s presentation for the most part.  The visuals benefit from some nice neon-lit locations and some interesting enemy designs.  However, if you look closer, it does all look a bit PS3.  There are performance and fidelity modes and while the game really benefits from the 60 frames per second treatment, we couldn’t see any improvement in graphics quality when switched over to the 30 frame, higher resolution mode.  It claims that there is some ray-tracing in that mode but we were hard pressed to notice it. 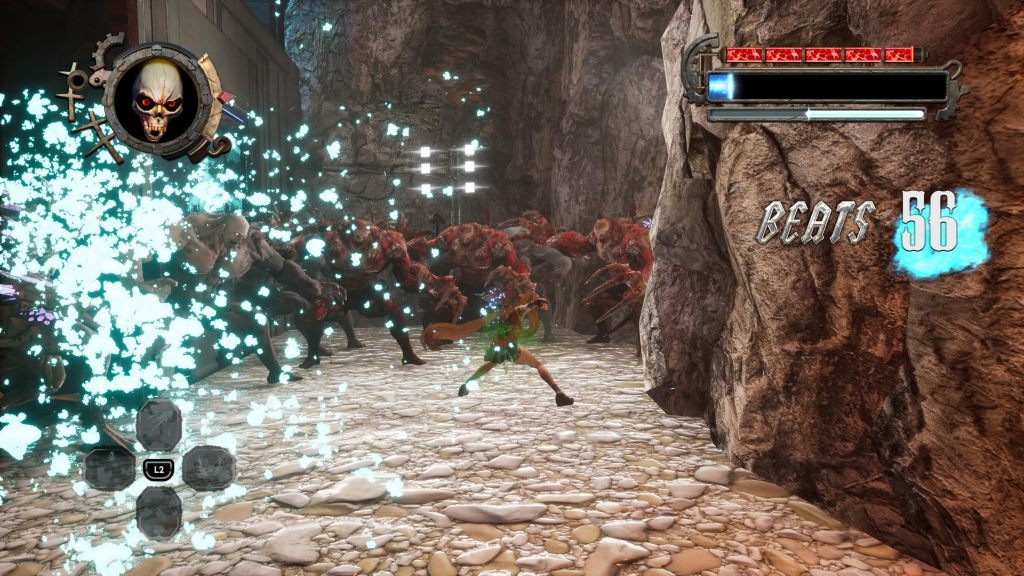 The sound is pretty good though.  The music is suitably rocking and hyper-active, really setting a tone for the relentless action while the sound effects are really nice and booming.  Our sound bar got one hell of a workout and a complaint from the family, which is always a great sign.  Honestly, if you’ve got a good sound bar, that might be reason enough to play this.

We’re not afraid of a little jank (we’ve put hundreds, if not thousands, of hours into EDF) and so we’re alright with how rough around the edges G.O.R.E is but we’re not a fan of horrible difficulty spikes and, if you’re determined to stick to the default or even harder difficulties, the game’s already too long 12-15 hour running time is going to be a lot longer for you.  But we still can’t help being charmed by shooters that combine gore, tactical(-ish) combat and linear gameplay so while this game might not be right for the wider gaming audience, we’re quite happy with its lemony charms.  That is when we don’t want to lash our controllers straight out of the window.

Gungrave G.O.R.E
6 Overall
Pros
+ Some fun and frantic combat
+ Linear layout is welcome
+ Full of AA, lemony charm
+ Main character has lots of techniques
+ Boss battles are decent
+ Has a handy history recap
Cons
- Difficulty spikes can be miserable
- Shooting controls are needlessly fussy
- Visuals don't stand up to close scrutiny
- Story doesn't hold your attention
- Any attempt at variation tends to be annoying
Summary
Gungrave G.O.R.E feels like a PS2 game and, at times, looks like a PS3 one but we enjoyed the combat, linear layouts and score-based gameplay. The difficulty spikes and slightly unintuitive controls definitely spoiled the party though.