In 2018, the vertically-scrolling shoot ’em up, a genre that once dominated the videogaming scene, is something of a niche type of game and this port of a 1997 Sega Saturn conversion of a 1995 Japanese coin-op is a particularly odd choice for a PS4 release but here we are looking at Game Tengoku: CruisinMix.  This PSN release combines the original Saturn release (itself a port of the arcade title with an additional ‘arranged’ mode that added two more levels) and a new ‘Arcade+’ mode which marginally improves the visuals.

The original isn’t a particularly long game with just six short stages but it is memorable thanks to its ‘cute ’em up’ parody style that sees the game visiting previous titles from Jaleco, the developer of the original Game Tengoku (translated as The Game Paradise) arcade game, and other arcade titles to use as inspiration for the enemies and backgrounds.  With levels based on pinball, driving games, classic retro coin-ops as well as the J-RPG and Karaoke based extra levels from the arranged mode, this is a genuinely interesting and fun title to work your way through. 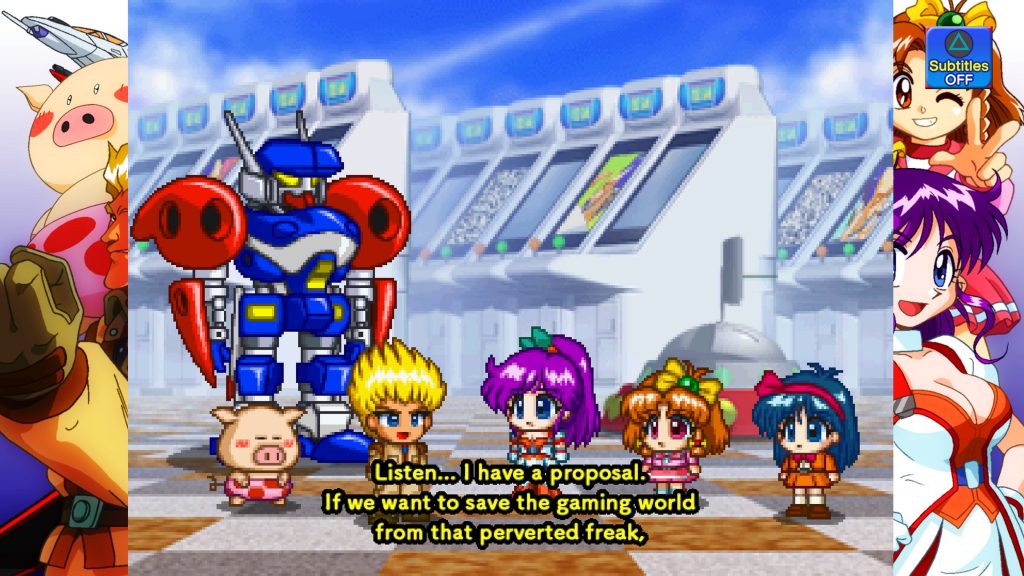 In terms of the core shoot ’em up mechanics, this is a more offence-based shooter rather than being an all-out bullet hell experience.  Memorisation isn’t the key here and, particularly on lower difficulty settings, you can get by on good old-fashioned skills and reflexes rather than obsessively trying to recall enemy attack patterns.

As is pretty standard in a ’90s shooter, you’ve got two modes of fire for your main gun (rapid and charged) and you can drop bombs when it all gets too much.  Aside from that the gameplay is pretty simplistic with only a couple of power ups, one of which that beefs up your main weapon and another that adds drones who, quite brilliantly, take the form of the other playable characters.  Speaking of which, the main arcade version of the game offers five to pick from taken from other Jaleco titles such as Momoko, Plus Alpha and Exerion.  The ‘arranged’ mode adds one more which is also available in Arcade+. 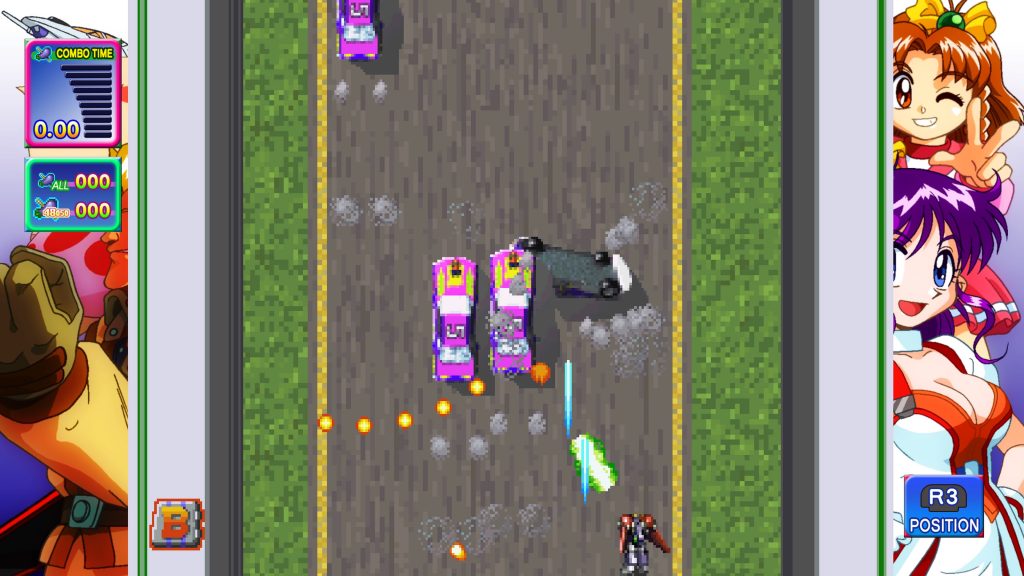 Two DLC characters are available too.  These are Clarice (who comes with a car from City Connection) and Homura from baseball title Bases Loaded.  These are great additions, especially Homura who plays very differently from all the other characters.  There’s great variation between the original six though also so you’re sure to enjoy playing with most of them and the game’s trophy set requires you to do so if you want to get the game’s very achievable platinum.

While the original Saturn port is in Japanese with subtitles only available for the game’s silly, but enjoyable, plot but not the game’s main menu, the Arcade+ mode offers English menus and here you can customise the game by selecting your number of lives, the difficulty (five levels from very easy to very hard), whether or not bombs trigger automatically to save you from a hit and whether or not defeated ships fire revenge bullets at you.  This is great because it opens the game up to genre beginners but also caters for experts.  We found the medium difficulty to be very challenging and so were glad for the option to put the old training wheels on. 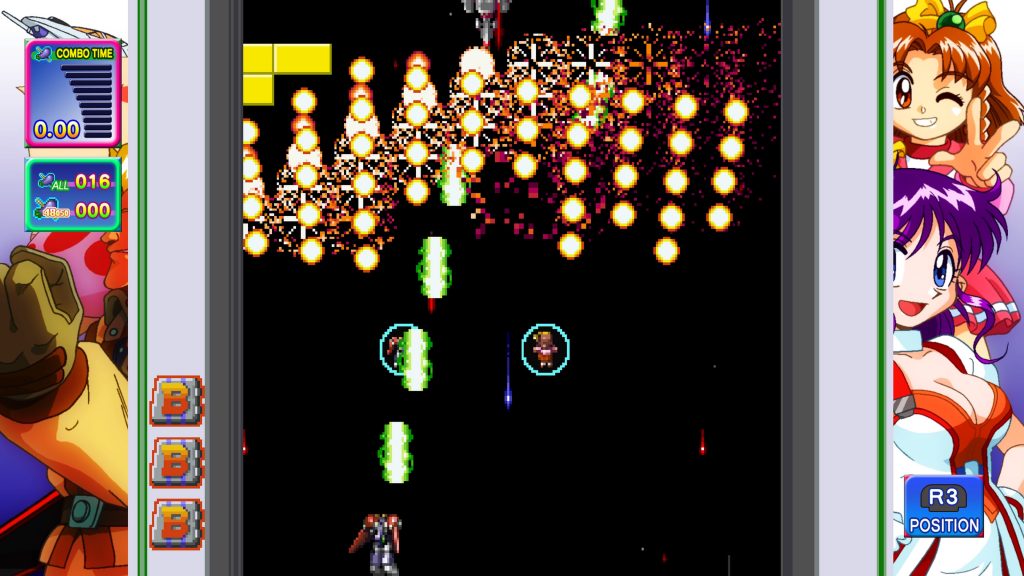 With all that said, there’s still not a ton of game here and that’s okay because shoot ’em ups should be short, intense affairs.  A bit of value is added by the ‘Data Mode HD’ setting which offers some history lessons on the games that are parodied here and come with some funny commentary from the game’s playable characters.  Between that and the rather silly plot that the ‘arranged’ mode offers, there’s a bit of story depth here even if it is played entirely for laughs.

Visually there are a couple of aspect modes and some wallpaper options but this is very much a ’90s arcade game and has that pixelated look that you’d expect but there’s a lot of charm here and the creativity on show definitely helps improve our opinion of the presentation but be warned, if the parody aspects weren’t in the game, this would be pretty ordinary.   The music is also fairly standard fare with hectic Japanese chiptune music and excitable voice overs.

There are better, more dynamic shooters on the system but if you’re looking for some classic shoot ’em up action but could do without the usual industrial/space/warzone settings then this is definitely worth checking out and is certainly a treat for fans of the genre and the original Game Tengoku coin-op but this game does lack the polish, sophistication and drama of the best titles in the genre and while we wait for CAVE Interactive to port all their classic shoot ’em ups to this generation of systems, we’re glad to see obscure titles like this get a bit of love in 2018.

UPDATE (30/11/18) – the latest patch of the game updates the whole game to the ‘Special’ version and this gives you English menus on the arcade mode (thank you!) and adds some new music/voices and some other minor fixes.

Game Tengoku: CruisinMix
7 Overall
Pros
+ A really fun take on the genre
+ A good number of varied playable characters
+ Pretty original for this type of game
+ Good range of difficulty settings and options
+ Includes a Tate mode
Cons
- Not the most polished shooter
- Lacks interesting power-ups and scoring mechanics
- Doesn't offer a ton of longevity
Summary
Game Tengoku is a far cry from the sort of beautiful, complex and detailed shoot 'em ups that represent the best in the genre but it's a well-considered port of one of the funniest, and most original, '90s arcade shooters and should be enjoyed with a smile as was clearly intended by the developers.