Brought back from the brink, the Darksiders franchise once belonged to THQ (RIP). The franchise (and THQ’s name) were bought up by Nordic Games and ex-members of Vigil Games (developers of the first two Darksiders games) formed Gunfire Games and have created Darksiders III. Whilst the first two titles were very faithful Zelda clones the third entry takes a slightly different approach and goes Metroidvania. 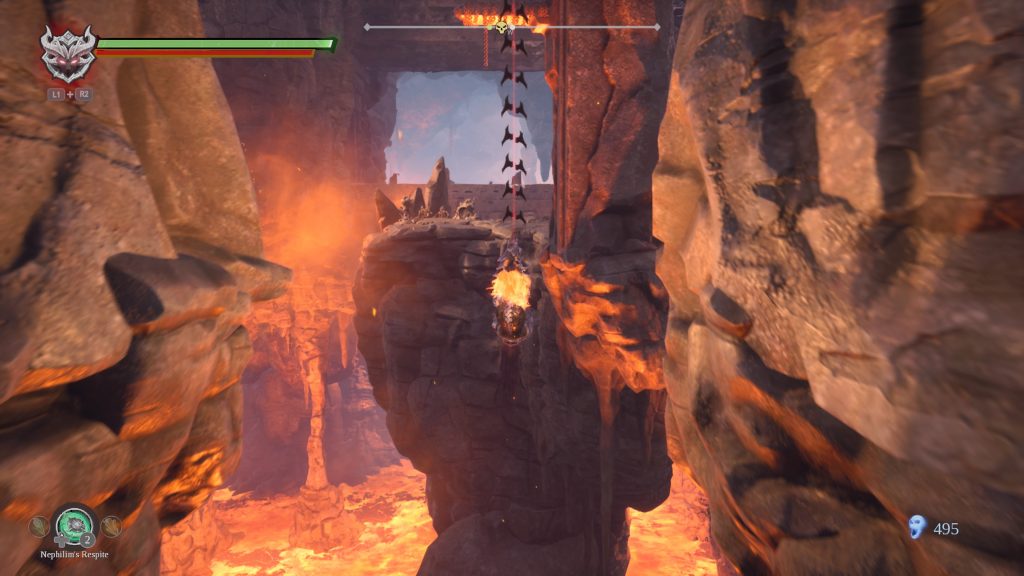 Based around the Four Horsemen of the Apocalypse, the first two titles had you play as War and Death respectively, the third has you playing as Fury. She’s tasked with killing the Seven Deadly Sins who, along with angels and demons have taken over the Earth after the coming of the Apocalypse in the first game. As returning players already know there are many mysteries in the overall story to Darksiders so although Fury’s task is straight forward she will uncover more than she initially intended over the course of the game.

Viewed from a third person perspective at first glance things seem similar to the the previous two games. Fury wields a whip and can chain combos together, with the timing of your button presses changing which combo you get. You can dodge, double jump and swim and will gain new weapons and abilities as the game progresses allowing you access to areas in the large, interconnected world that you couldn’t explore previously either for secrets or to continue your adventure. There is one major difference though, Darksiders III has been heavily influenced by the Dark Souls series.

This is evident in many areas. First off the combat is very difficult. Enemies hit hard and despite having quite a few different combos at your disposal it’s in your best interest to wait for your opponent to attack, especially against bosses, before dodging and counter attacking. As you level up you can take advantage of the weaker enemies somewhat, but stronger enemies should not be taken lightly and if you’re facing a group then you’ll need to be especially careful as they have a tendency to surround you. 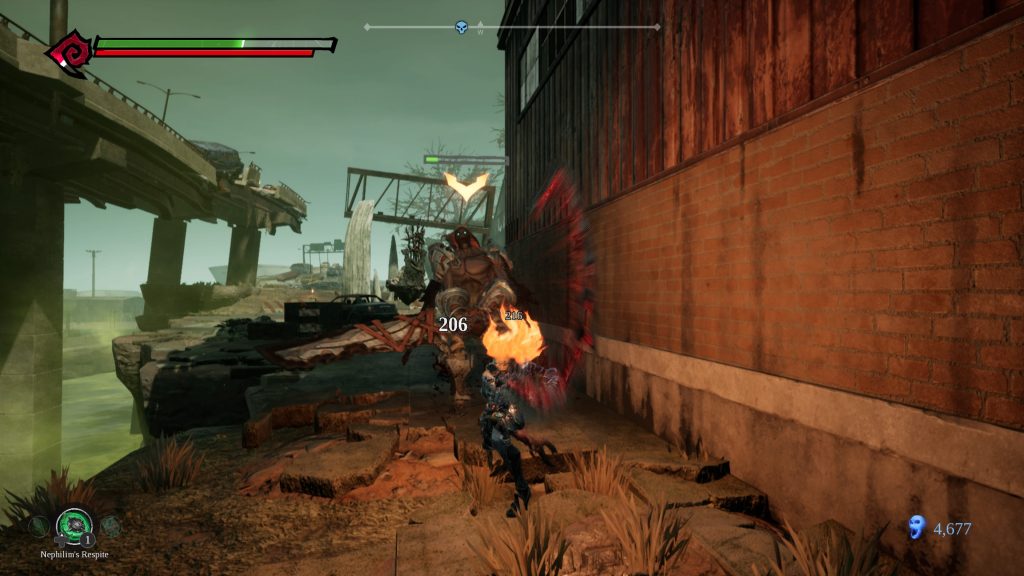 Secondly, if you die you return to the last portal you passed. Any items you collected will still be in your inventory and any completed puzzles will remain so, all enemies will respawn and you’ll drop all your Souls (currency and experience) at the place of your death to recollect. You also have an Estus Flask equivalent, a set number of healing items that replenish upon death but you also have a finite number of other items to use when required. There is also no map like Dark Souls, but here it makes backtracking to check which areas can be explored more to be needlessly difficult. It’s an interesting take on the formula and isn’t out of place, unfortunately the execution is lacking.

Primarily this is the fault of the camera. The camera is atrocious and for many reasons. If you’re in a confined space or back up against a wall then the camera will fail to show you the action. The camera is desperate to stay behind Fury so when you back up too far Fury just disappears inside the camera and in a game where each hit is quite punishing you’ll die very quickly as you can’t see what’s happening. Also, thanks to the camera wanting to stay behind Fury, Fury will block your line of sight to an enemy making you blind to their attacks. On bigger enemies this isn’t such an issue but smaller enemies or projectile throwing enemies far away can be obscured completely. Similarly as I mentioned before enemies like to circle behind Fury, taking advantage of the camera. If the camera was willing to pull out a little this wouldn’t be an issue but instead you have to make do with an indicator that flashes up when there’s danger off screen, but it isn’t very useful.

So despite the decent sized move list which only expands as you gain new weaponry, thanks to the difficulty and camera issues you end up finding a useful combo and sticking to it. Switching weapons mid-fight is difficult, though not impossible, and again I found the weapon I wanted as my secondary and generally stuck with it throughout the game. 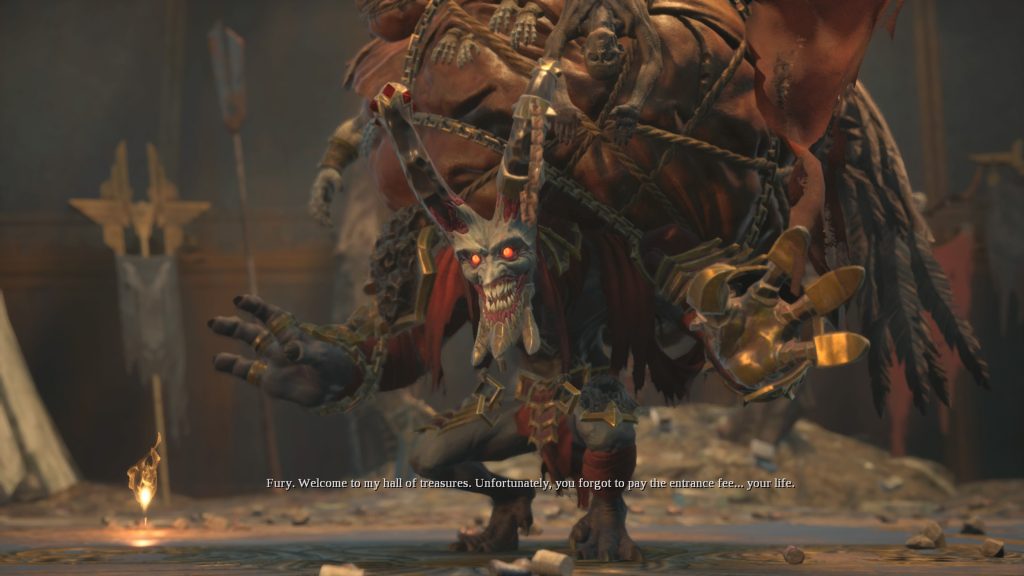 It’s not all bad though, about half way through the game, either through levelling up or through my own personal ability, things started to click and I was getting through areas without so much resistance. Yes I was using mostly the same combo over and over again but similarly to Dark Souls, it wasn’t how snazzy I was being that mattered, it was survival. Getting past that enemy that had been giving me trouble, exploring a new area which may contain upgrade materials, a new found ability opening up multiple paths, these are all rewarding gameplay mechanics and Darksiders III is full of these moments.

Exploring each area is often a visual feast as well. Though technically not the best you’ll see there is a lot of colour and, although there is the odd boring area, things can look quite impressive. The characters are the strongest design element though with each being impressively detailed and unique.

Unfortunately there’s more bad news however. The game is quite buggy at the moment. I’ve had it crash quite a few times, though not every play session. There’s an odd bug where the sound stops working (including on the PS4 UI) and I need to close the game to fix it. The sound stutters quite often as well, especially when entering a boss area. There are obvious loading zones that pop up far too frequently, freezing the action and destroying the illusion of one continuous world and when you die, which you will, the load times to get back into the game are overly long. Of these the most infuriating is the loading zones which can sometimes pause the game to load within seconds of a previous load and even when in the middle of a fight at times. 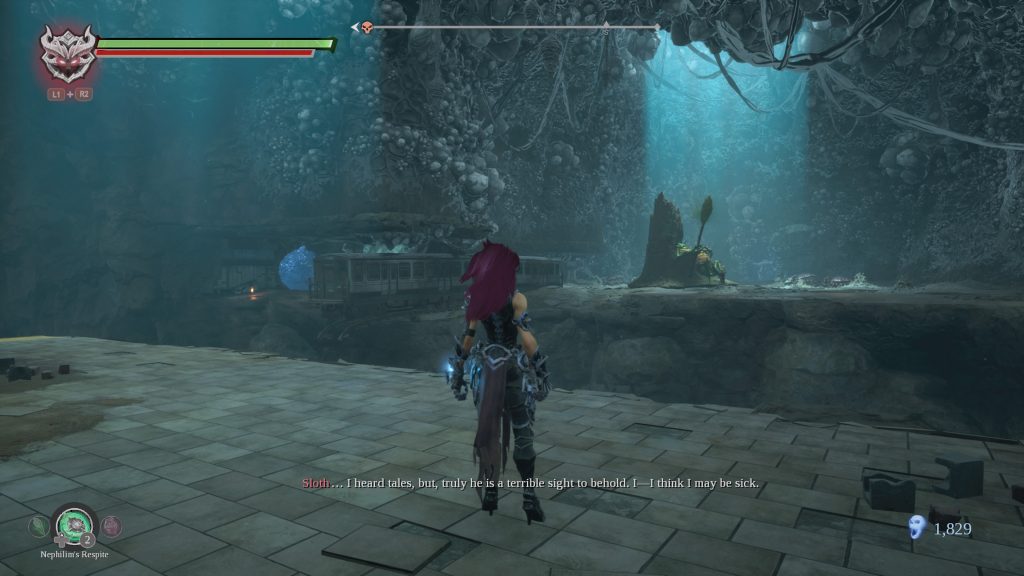 It’s a shame because although no element of the game is perfect I have enjoyed my time with Darksiders III. Fix all the bugs, get the loading times and frequency sorted and get the camera working sufficiently and you’d have an enjoyable game in a franchise that was close to disappearing. Instead you have a game that requires a lot of forgiveness from the player for them to get the most out of it. It’s still a decent game but a little more time or budget and fans may have had the sequel they dreamed of. The fact it exists at all is something to be thankful for.

Darksiders III
6 Overall
Pros
+ Great character design
+ Exploring is addictive
+ Difficulty is rewarding
Cons
- Camera is terrible in a lot of circumstances
- Quite buggy
- Combat offers combos but promotes defensive play
Summary
Darksiders III is a slight change of pace for the series which succeeds in certain areas whilst failing quite badly in others. The camera is terrible and there are plenty of bugs, but the combat is rewarding and exploring areas with new abilities will keep more forgiving players entertained.