This particular reviewer is partial to quirky retro-tinged games and indie curios, so it’s with a little alarm we find ourselves reviewing Achtung! Cthulhu Tactics, a board game conversion from UK devshop Auroch Digital.

Simply described in press releases as a Lovecraftian turn-based strategy game, we don’t have much to add to that convenient pigeonholing. Other than that, Achtung! Cthulhu Tactics is set in late 1944 in the Ardennes but this is as close as you’ll get to a real world context. 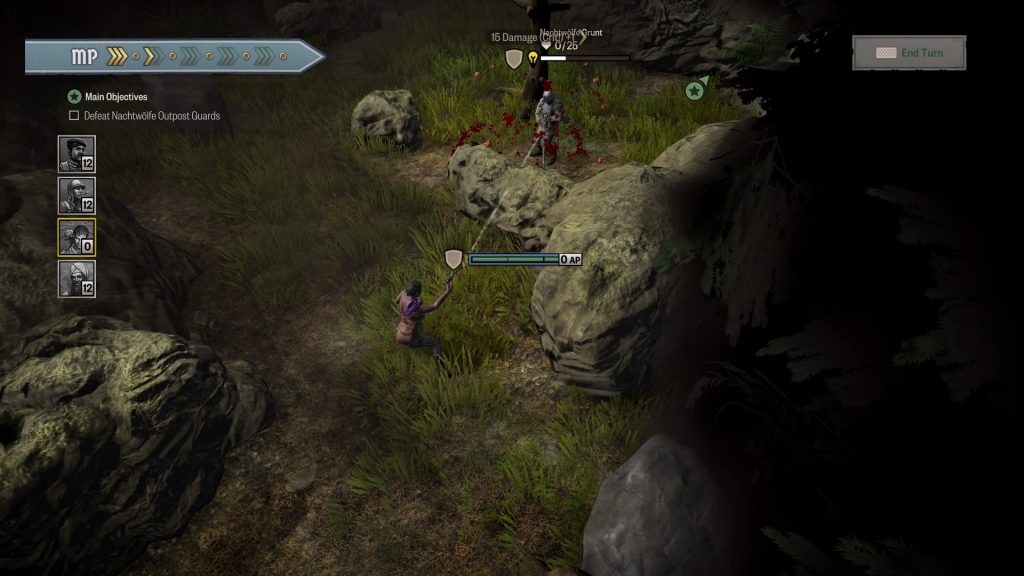 Achtung! Cthulhu Tactics takes the pretext that the Nazis dabbled in the occult and have weaponised all kinds of eldritch horrors in a desperate attempt to turn the tide of the war. You play as a crack unit of Allied stereotypes: the French resistance leader, the American GI, the plummy voiced Brit commanding officer and the close combat specialist who is a dab hand with a shotgun too. It’s a shame the developers missed the opportunity to take the piss out of the denizens of such TV shows as Most Haunted, rather than just the crack commando trope.

You’ll face off against two distinct enemy factions: Black Sun and the Nightwolves, who just happen to hate each other. So far, so convenient.

Now that’s out of the way, we can get down to the gameplay. Mechanically this is very similar to the UFO Enemy Unknown series, though a major departure is that there are two phases during a mission. During the movement phases you’re free to explore without encumbrance until you get close enough to enemies to actually fight. No walking round a corner and getting headshotted for your trouble here. 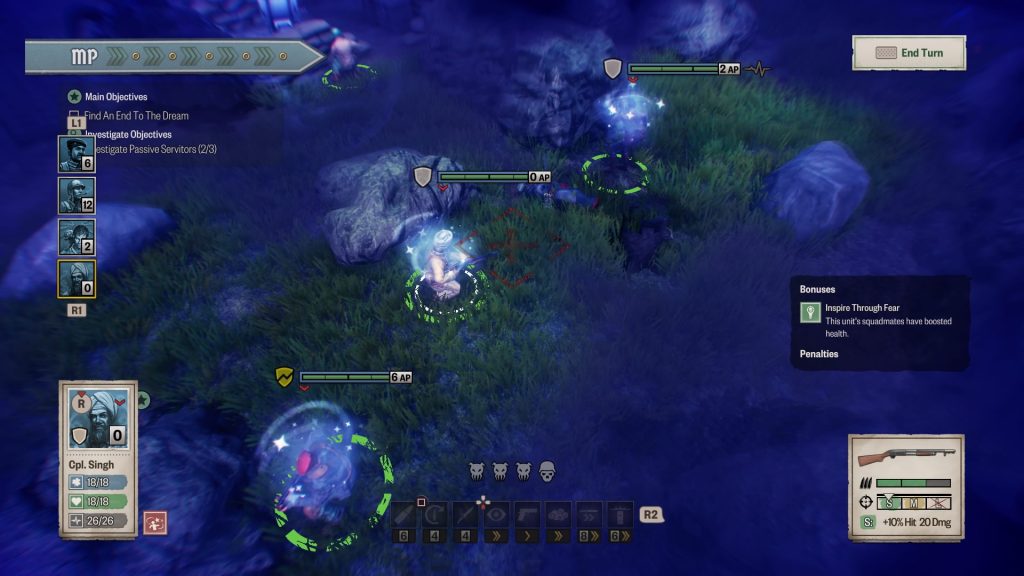 Upon meeting the enemy you’ll enter the combat phase and turn-based component of the gameplay. Each action uses action points or momentum, your actions in a particular turn being limited by the points you have available.

Typically you’ll have (in order) fire primary weapon, melee attack, reload, overwatch, use item, fire secondary weapon and a special ability or two. Most of these are self-explanatory but we’ll go into a little more depth for a few.

Overwatch is probably more familiar to modern gamers in the context of the Blizzard FPS juggernaut, but in this case it’s a very useful mechanic where you can direct your troops cone of attention towards where you think the enemy will come from. If you’re not sure where enemies are, it’s often a wise move to set overwatch and let them come to you. 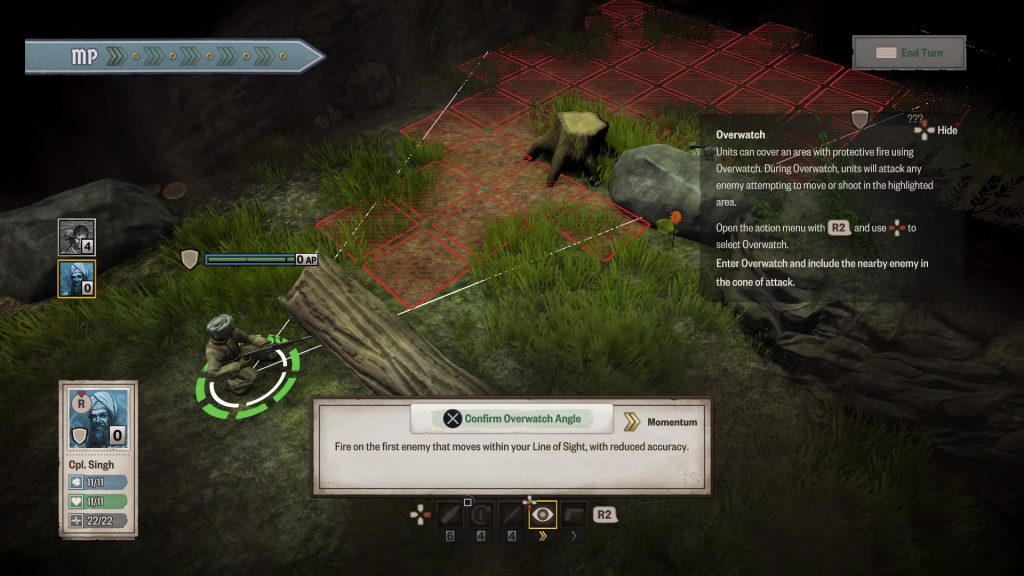 Secondary weapons don’t use AP as main weapons do, just your remaining momentum. This can come in very handy when you’ve chipped away the health of a powerful enemy bearing down on you but the threat of close quarter action doesn’t appeal.

Given Achtung! Cthulhu Tactics original boardgame roots, most attacks barring a couple of specials are privy to a dice roll. This leads to endless hilarity when you can’t hit an enemy stood directly next to you, especially when you supposedly have an 85%+ chance to hit. One particular turn we failed to kill an enemy with four consecutive high chance shots and our party was wiped out one by one the next turn as our carefully planned defensive positions fell.

The RNG can be a harsh mistress, but sometimes it goes from the sublime to the ridiculous as our next attempt at the mission led to us tearing enemies a new one with every shot. It was like the one episode a season in 24 where Jack Bauer went on the rampage without being injured himself. 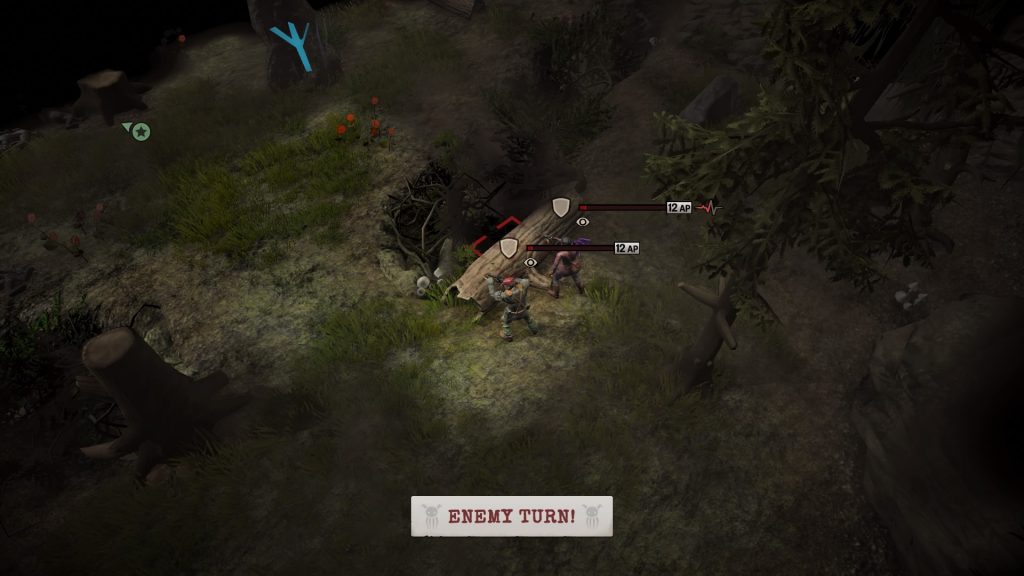 In the event one of your group is incapacitated, you’ll have a limited number of turns to revive them. In early missions you’ll only be able to heal one hit point, but later on you’ll unlock a medkit to fully heal when needed. One battle before we realised how this mechanic properly worked had us hunkered down behind cover taking potshots at the enemy moving just out of our visual range. Mainly because both characters had just 1 hit point each so it became an attritional battle chipping away at the remaining health bars and hoping for the best.

In the event you don’t revive an ally, they’ll be captured by the enemy and you’ll have to play a side mission to rescue them. Given you’re one or two fighters down, these missions can prove challenging, but a considered approach will generally yield success unless the dice rolls don’t go your way.

As you progress through the missions you’ll gain skill points to gain special abilities, some active, some passive. These range from the ability to automatically reload at no cost to your AP to the likes of AOE damage to enemies in your immediate vicinity. 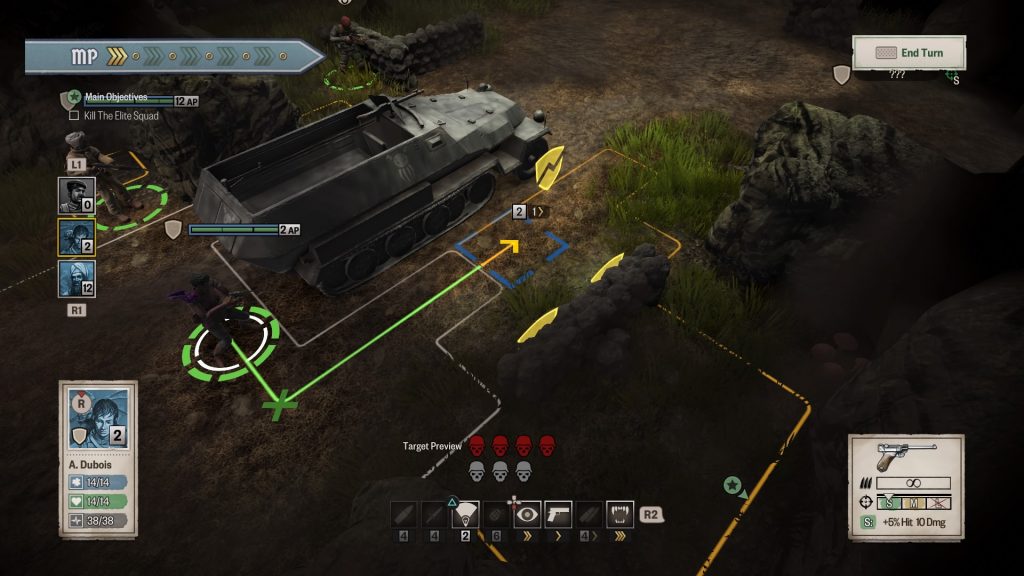 You can be affected by various status effects, conversely so can the enemy. Early on these include the staggered status that cuts your AP in two, making your progress challenging. As you encounter various Lovecraftian horrors your characters will also be psychologically affected, especially in close proximity.

Your leader’s morale also has an effect on the rest of your party, when they’re riding high you’ll get a boost and when they’re under heavy attack their leadership skills will be diminished. It’s an interesting addition to the otherwise conventional turn based gameplay.

All in all, Achtung! Cthulhu Tactics is a worthy addition to the turn based strategy genre and well worth your time. If you’ll excuse us, we’ve Nazi shoggoths to hunt.

Achtung! Cthulhu Tactics
8 Overall
Pros
+ Fun gameplay
+ Well implemented ruleset of the board game
+ Gleefully silly plot
Cons
- RNG can feel punitive
- Having to play side missions can be a bit of chore
- Missed a trick by not taking the piss out of occult ‘experts’
Summary
Achtung! Cthulhu Tactics is a worthy addition to the turn based strategy genre and well worth your time.