Effie sells itself short from the outset. That title for a start. It turns out the titular Effie is a little girl who is having a story told to her as a framing device for your adventure. You play as the storyteller Galand who is recounting his adventure to free the land of Oblena from the clutches of the evil witch Melira.

Alicante-based indie Inverge Studios have lovingly crafted this vividly realised puzzle platformer. We have to confess the gameplay trailer didn’t have us that excited as it focused on the hoverboard-like traversal method for getting from one area to another. We’re glad we took the plunge though as we’ve found ourselves really enjoying Effie. 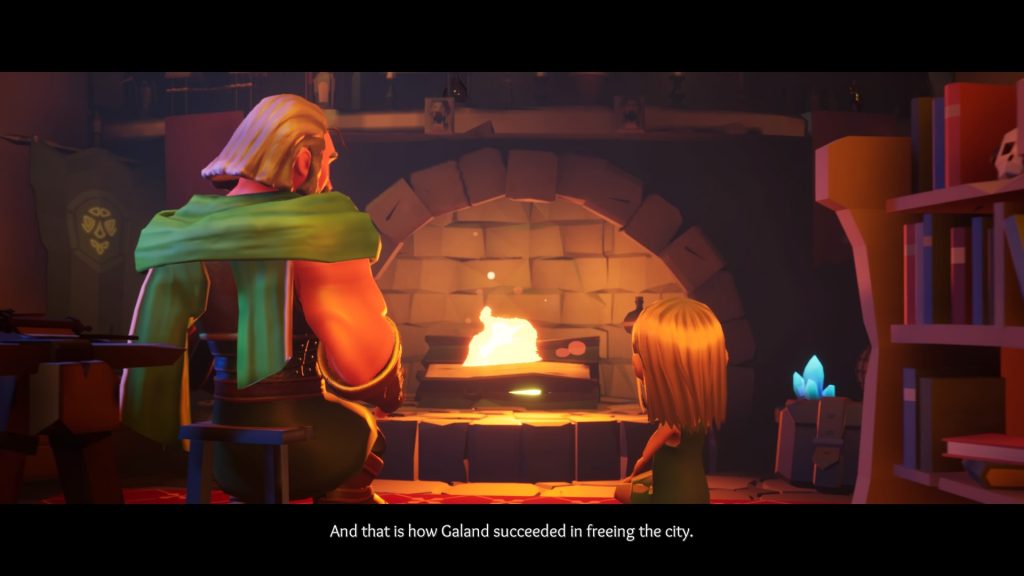 After an ill-judged dismissal of a young woman asking for help, lazy young hero Galand finds himself cursed to become an old man by the same woman asking for help. The woman in question being the aforementioned witch Melira. So begins the story Galand tells the eponymous Effie.

Starting out in the Temple of the Elder Protectors, the devs gently introducing the basic controls and give you access to Runestone. That being your shield, weapon, transport and XP container all rolled into one handy item. Health and combat upgrades are gently trickled in successive stages as you tackle the remaining four dungeons. 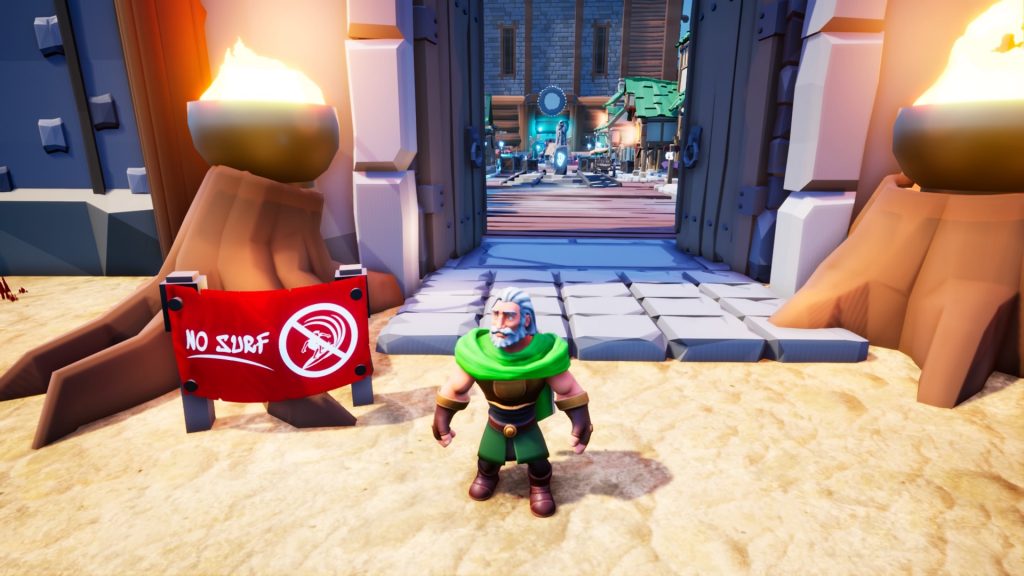 You’ll be immediately struck by the cavernous architecture and impressively realised level design, hopefully our screenshots do it some justice. It’s an impressive endeavour for an indie developer put it that way.

You’ll gently be eased into the storyline, in effect you’re seeking to free Oblena from the evil Melira. Your path is mapped out by way of a puzzle you’ll complete on your way to exiting the home of the Elder Protectors. Upon doing so you’ll glimpse a beautiful vista with castles in the distance framed by crimson grasslands blowing gently in the breeze. 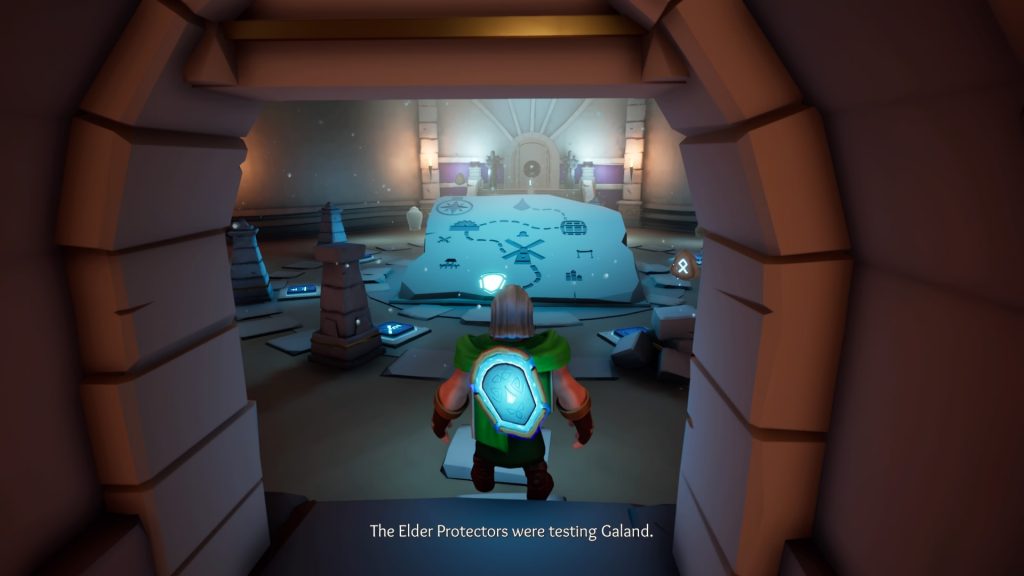 Then your first face-off against Melira begins, in this case killing a few simple enemies. As you dispatch enemies, her health bar decreases. Subsequent encounters with her do end up with you taking a more direct approach to damage dealing at least. Once you’re done on this occasion, she’ll flee vowing to return and seek revenge. 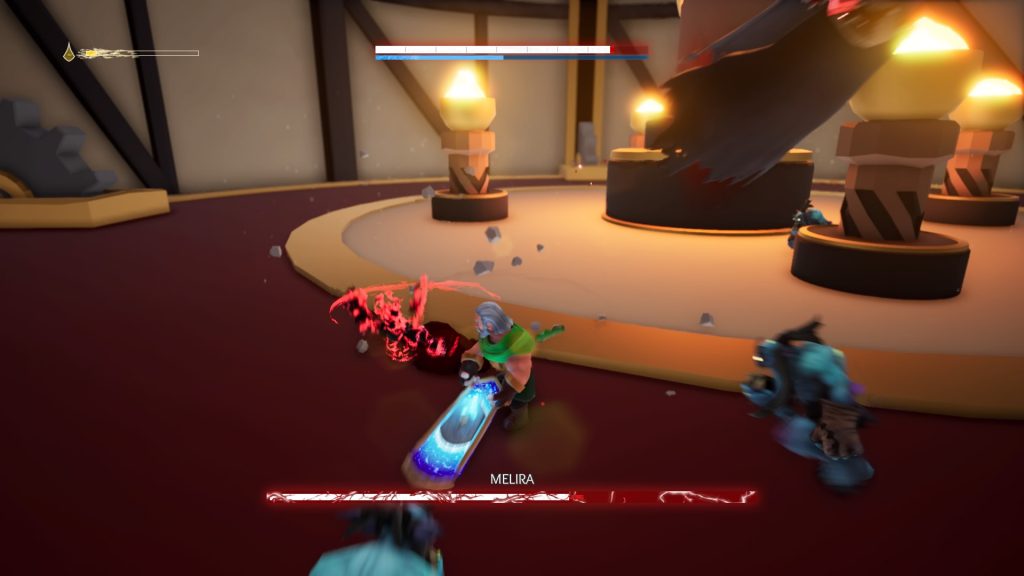 You’re then free to tackle the remaining areas at your leisure, though the map you previously glimpsed planted the suggestion we tackle Windmill Town next. Runestone’s function as a sort of hoverboard comes into play here. The Red Plains of Oblena are dotted with ramps, rivers, speed boosts and occasional enemy encampments. If you collide with a solid object you’ll come to a stop, but a quick tap of

is enough to get you moving again.

Our first power-up was a shoulder barge (mapped to

) that turned out to be very useful with regards traversal of Windmill Town, especially when used in conjunction with the double jump introduced in the first dungeon. It’s also quite useful in combat, doing the same damage as a light attack against lesser enemies. Each power-up is geared to help you tackle the task at hand, granted as you enter a dungeon before the gates slam shut behind you. 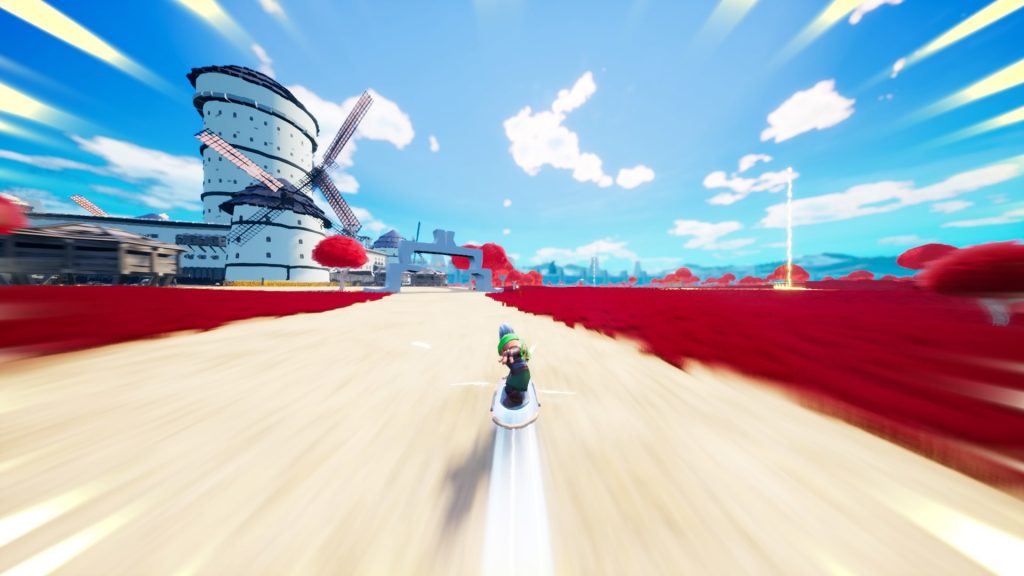 In addition, dotted around the game world are experience shards that fill a meter along with larger caches in chests secreted around the world and off the beaten track in dungeons. These, along with the relics that fill in the backstory, are the only collectibles you’ll need to worry about hoovering up as you play. If you’re thorough you won’t have any huge issues finding them anyway.

Combat is generally straightforward; the basic enemies not being hugely threatening. There’s generic goblin types and elemental wraiths, generally dispatched without much issue. Though if you get attacked by a large group, you’ll learn to prioritise those enemies who pose a more tangible threat with powered up attacks. Larger enemies tend to only be susceptible to heavy attacks, in the case of hulking bog monsters telegraphing their attack cones allowing you to get out of range. Get out of range, then unload on them. It feels a little cruel if we’re honest, one not being too hard to tackle. Several on the other hand makes for a more interesting encounter. 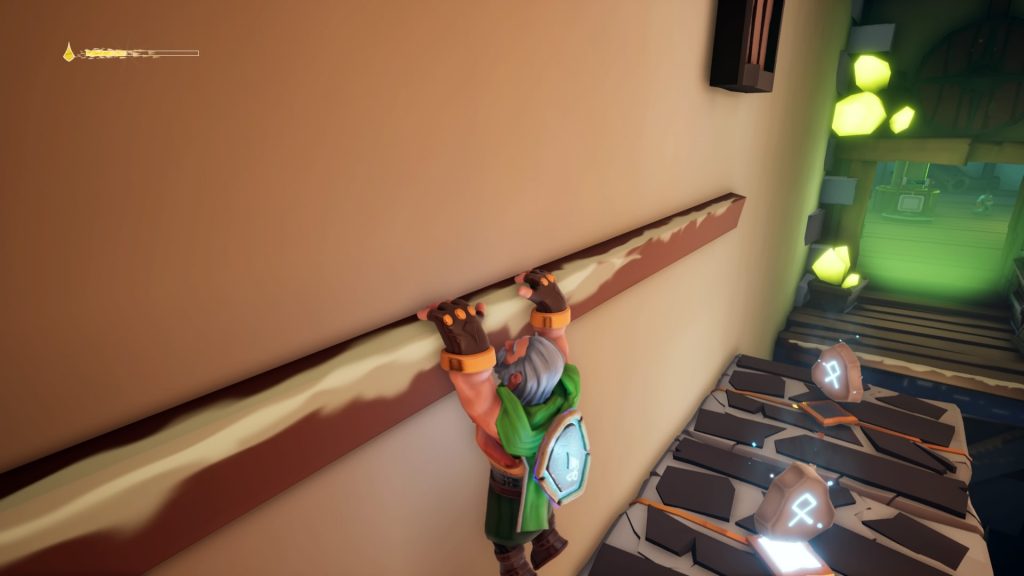 Unfortunately for a 3D platformer, the controls can be a little imprecise. A jump you’d make on one occasion is suddenly one that requires a double jump instead. Then you double jump and overshoot the platform altogether due to the camera doing its own thing and obscuring your movement.

This is exacerbated by some sloppy checkpointing, especially when you’ve just negotiated a series of tricky jumps to hoover up a collectible, only to fall into lava/an abyss/hopeless despair and having to do it all again. Or one boss fight against Melira where you need to pull off a perfect run through a sawmill to prevail. Maddening. We prayed for a checkpoint that never came. 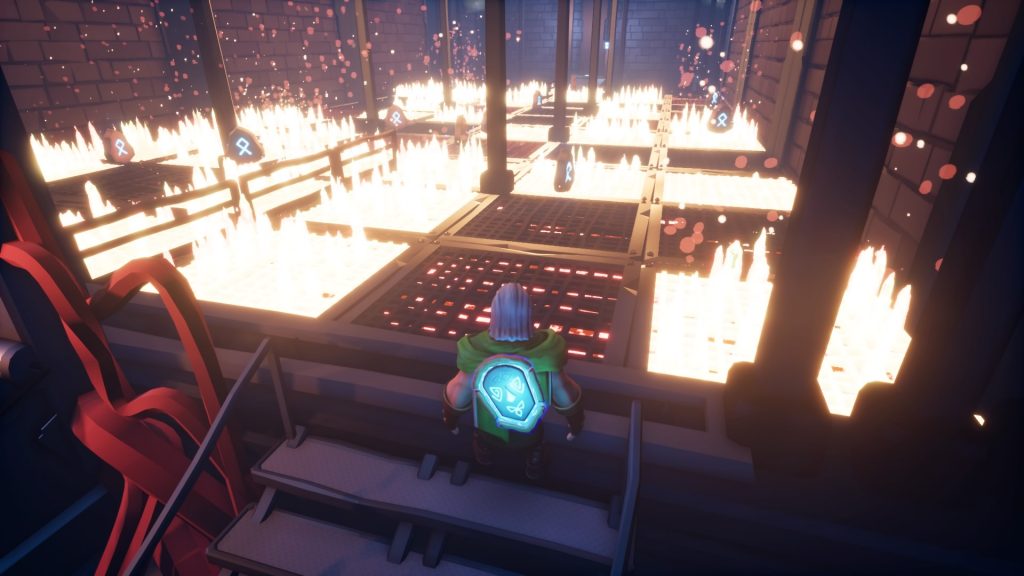 Galand’s movement on the ground is oddly inconsistent too. Sometimes he’ll break into a run with barely any input from you but when you push in a direction with full deflection, he’ll merrily trot along without any sort of urgency at all. This along with the imprecise jumping can make things a little frustrating on occasion.

When you retry a section after having died once again, Galand will interject by saying “no, that’s not how it happened”, a direct lift from venerable forebear Prince of Persia: Sands of Time. Cute all the same. 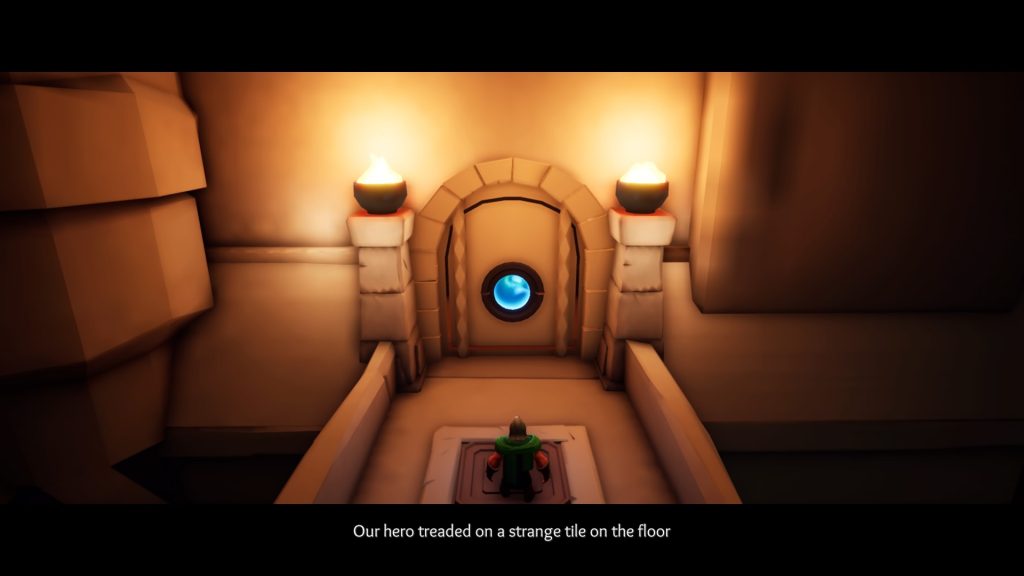 Some of the voice acting and subtitles betray Effie‘s non-native speaking production too. Pronunciation can be a little bit off on some words, just as typos creep into the subtitles. Relatively minor in a game such as this, but for a grammar and spelling nerd like this reviewer, it jars like dodgy lip-syncing on a Netflix TV show with an English dub. 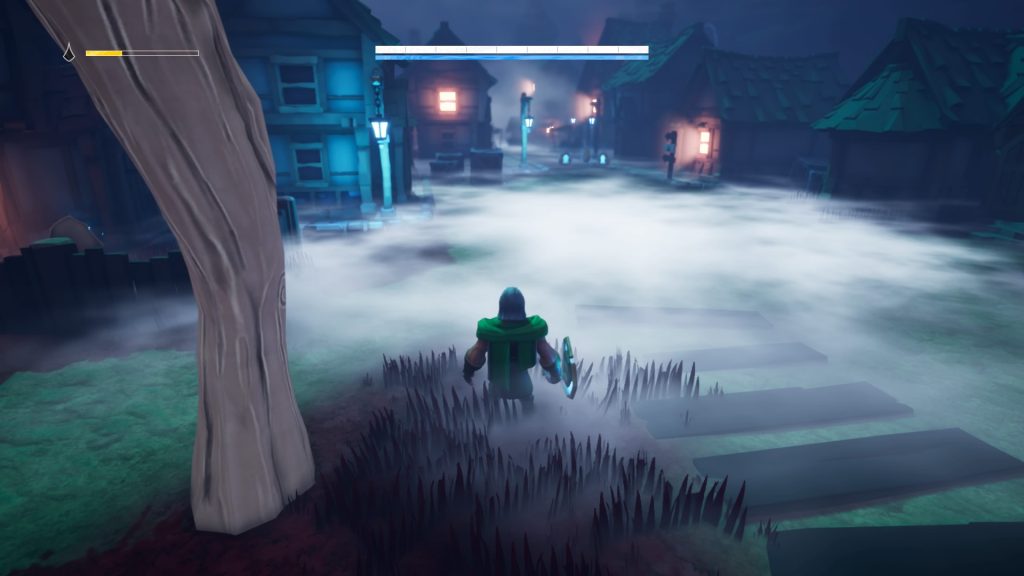 For the most part though, Effie is a great 3D platformer in a bright and breezy world. Well except for the dark Woodborn level that’s shrouded in mist anyway. Impressive visuals and generally solid platforming make up for the few frustrations. A special mention to the Windmill Town level for being a great series of set pieces with obvious progression, we’ll leave it to you to discover.