It’s not often I venture into fantasy ARPGs but there’s usually a relaxing, low-effort feel to a dungeon crawl against scores of disposable enemies. Warhammer Chaosbane comes from EKO Software who are looking to add Game Workshop’s universe to an already tried and true formula. With it’s inspiration very much on show, it’s time to delve into the depths and battle against just about everything the game can throw at you. 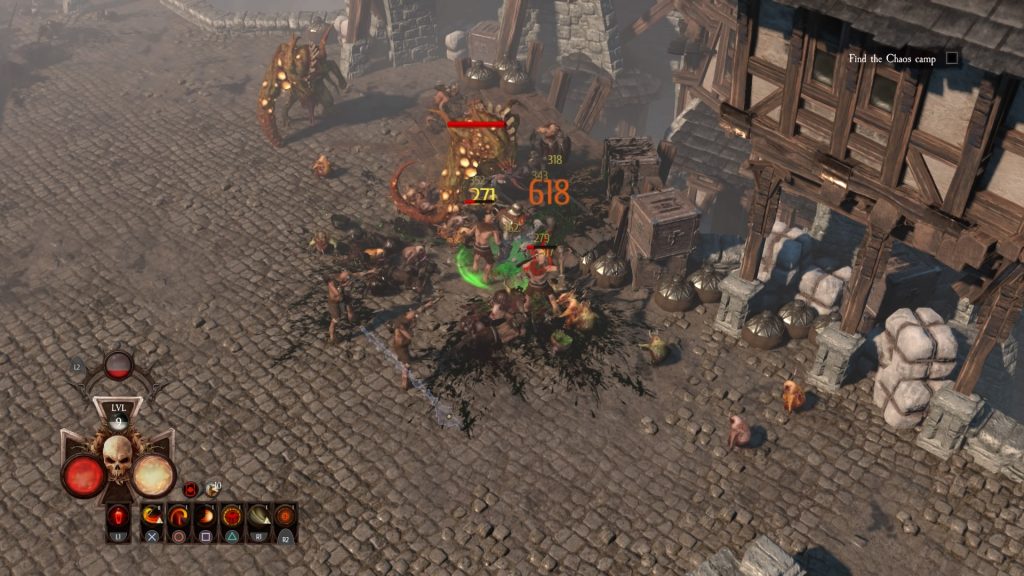 I wish I could say much about the story. It’s presented in a very self-serious tone mostly through in-game dialogue. There’s very little room for extravagant cutscenes with each hero’s tale bookended by some nice looking animated shorts. It does well to give your character a sense of context and history but it soon subsides. Magnus has now become emperor and almost immediately finds himself cursed by a Chaos Witch. You’re tasked with lifting the curse and restoring Magnus to his rightful power. Honestly, I’m not that invested with the Warhammer fiction to begin with but, the bland manner it’s delivered doesn’t offer me much reason to be enthused.

Gameplay is what you might expect from an isometric, action RPG. You play a character confronted by hordes of enemies and slay away. You have a basic attack that builds up energy which can then be used to trigger special attacks. You have a handful at your disposal. I tend to use these to plug any deficiencies with my character. If they’re short on ranged options or crowd control, you can find something that fits. There’s also passive benefits you can equip to gather extra resources, improve healing and so on. Whilst you do have four characters to choose from, you can build them in several ways. Warhammer Chaosbane isn’t short on options. 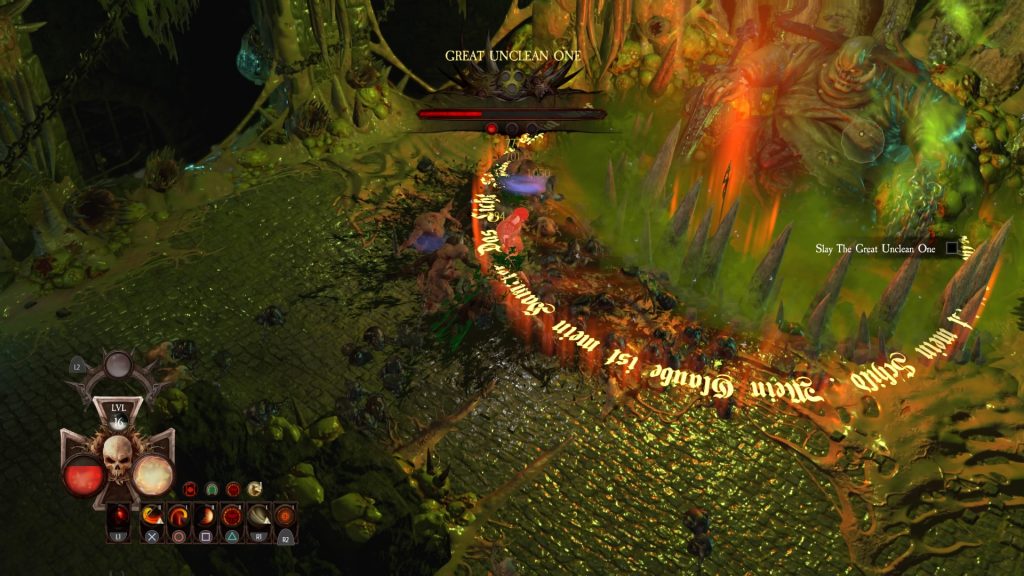 I spent most of my time with the Soldier class. He’s a standard damage-dealer who focuses on melee combat but his special skills can be upgraded to give him something of a more rounded feel. The other characters feel very different. The Mage prefers to throw spells from a difference and the available magic can be controlled in some interesting ways. You feel a little vulnerable up close but all roads tend to lead to something powerful.

It’s a shame there isn’t more variety in the enemy types. From act to act, there’s efforts made to give the environments a new look. The final areas have an ominous purple tinge to them whilst the third act takes place in snowy tundra. It’s nice to get out of medieval streets but you’re always facing the same archetypes in combat. There’s simple fodder enemies, spell casters, brutes and ranged combatants. They might look slightly different in each area but their jobs are always the same. 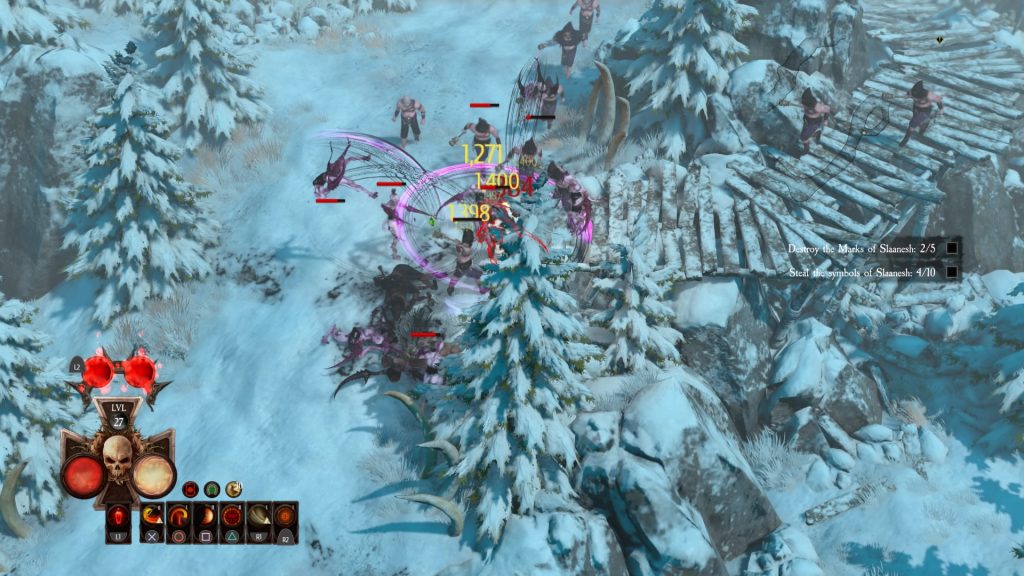 Objectives don’t vary much either. Quests will usually involve killing everything whilst trying to reach a certain point on the map. Occasionally, you’ll be tasked with fetching items but it’s mostly about crushing the many until you reach the next checkpoint. There’s always a map on hand to show you nearby points of interest but, when a job is done, you usually have to track your way back to an exit. You’re not clearly directed to them so the larger maps can feel a chore to traverse just to return to base.

Warhammer Chaosbane has an odd approach where side content is held back for the endgame. You gain access to it after completing an act and, unfortunately, that means you’re funnelled into the main quest. It can feel restrictive, even if it does keep the pace up. You can find yourself grinding older content if you’re short of levels. As a small mercy, once you’ve finished the game once, you have access to all that content across all your created characters. You won’t have to run that narrow gauntlet again but it does make the first run feel somewhat businesslike.

At least difficulty influences drop rates. The higher the challenge, the better your drops are. There’s about nine of them in total so there should be plenty of sterner tests on offer. Loot drops appear to be tied to your level so you always seem to find something of use. It’s usually marginal gains but it can make a difference. Whilst gear is the main character building aspect, you have a character level to increase and skill trees to enhance. It’s a rewarding, persistent treadmill that’s fun to run. It’s a shame the format doesn’t give players much to do until an act is over. 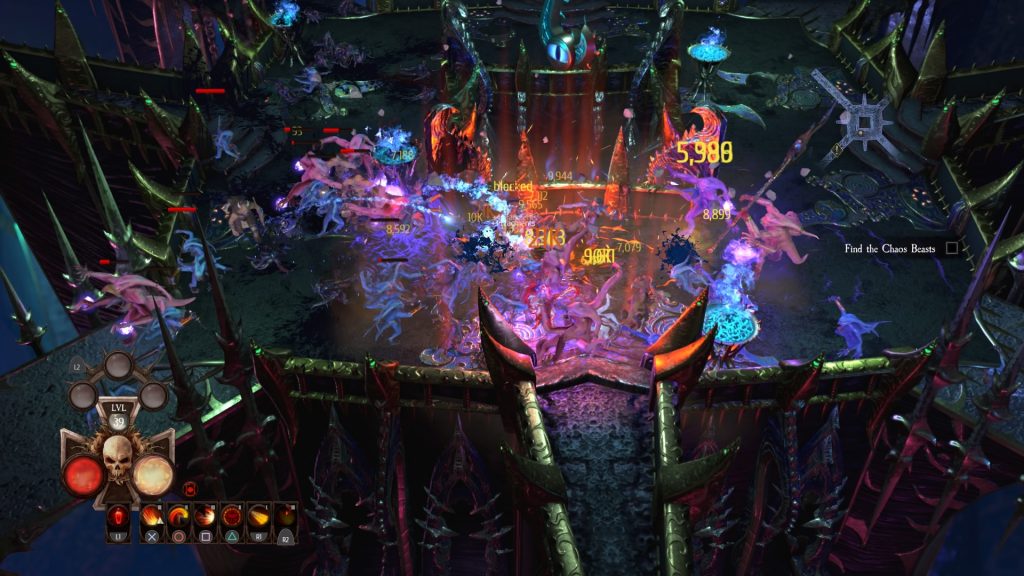 Co-op does help speed up the process and works well. Up to four players can join and I found it a reliable way to find more effective armour and weaponry. It’s a fun way to just stream-roll your way through content you’ve already experienced and gives you the opportunity to see what other people can accomplish with their warriors.

Despite the shortcomings, there’s an enjoyable, disposable time to be had with Warhammer Chaosbane. I know they have big plans for the endgame but the base content seems to have been sacrificed in service of it. The story doesn’t grab me but the simple appeal of new loot and skills keeps me trawling through the same dungeons.

Warhammer Chaosbane
7 Overall
Pros
+ Combat is fun and rewarding.
+ Characters offer their own sense of variety.
+ Difficulty levels and endgame content provide plenty to play for.
+ Co-op provides a swift way to power through earlier areas.
Cons
- The story is presented poorly with a very serious tone.
- Withholding side content until beating an act seems restrictive.
- There's a lack of variation in enemy types.
Summary
I found an fun, brainless quality to Warhammer Chaosbane that I could zone out to. Its inspirations are clear and imitates well without surpassing expectations. I found the story to be too self-serious and the presentation too bland. The loop of combat, loot and levelling always rewarded, though. The base content lacks some variety but the endgame should hopefully provide an enduring quality.