I missed the boat on the Destroy All Humans! series. I always wondered how much vocal support there was when Black Forest Games announced they were remaking the old games. I know the Playstation 2 era has a lot of undiscovered gems but the time has finally come for me to check this one out. Destroy All Humans! 2: Reprobed is a faithful remake of a game old enough to drink. Thankfully, it does appear to have some value in 2022. 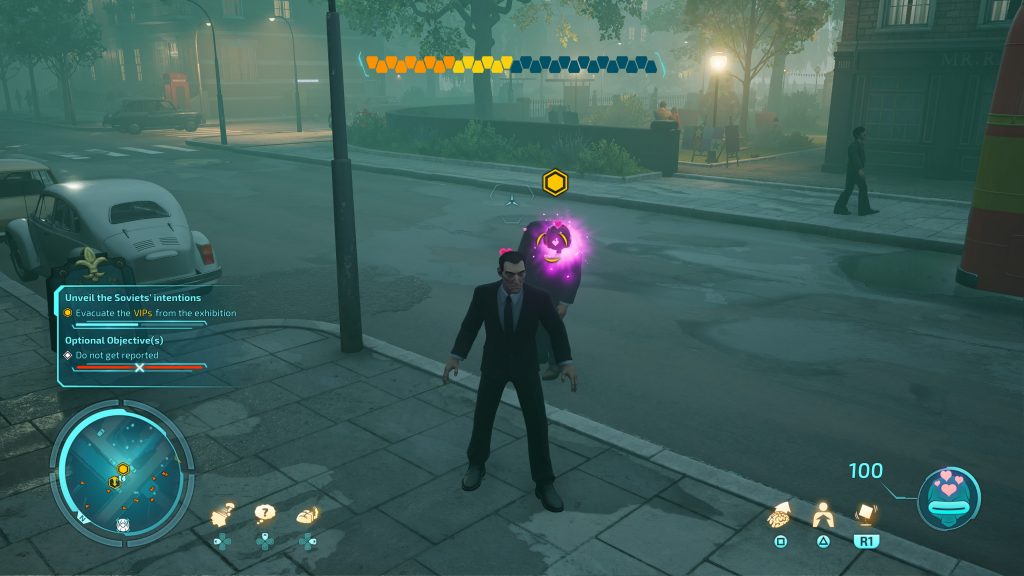 The visual improvements become immediately apparent. The muddy, low-resolution textures have been overhauled in favour of a much more colourful look. Grass and foliage really pops and there’s plenty of detail to admire. There’s always a risk with open world games that they can look a little lifeless. Destroy All Humans! 2: Reprobed delivers a dense set of areas to spend your time in.

The upgrades extend to the models which look sharp with plenty of character. At times they can look a little dated but the main cast has been brought up to code very nicely. It doesn’t push the Playstation 5 to it’s limits but it certainly gives an ageing game new life. It holds together on a technical level, although I did see pop-in. It’s especially true if you have line of sight off into the distance. The birds-eye view of from the saucer manages to show a lot on screen and I didn’t notice any performance hitches.

I do have some concerns over load times. Not that they’re especially long but some seem oddly placed. I’ve seen loads bookending cutscenes and I do find that a little jarring. The more time I spent with Destroy All Humans! 2: Reprobed, the less it bothered me. Restarts after deaths are fairly quick but I would’ve liked an option to abandon a mission, rather than waiting for mission to reload and quit it from the pause menu. 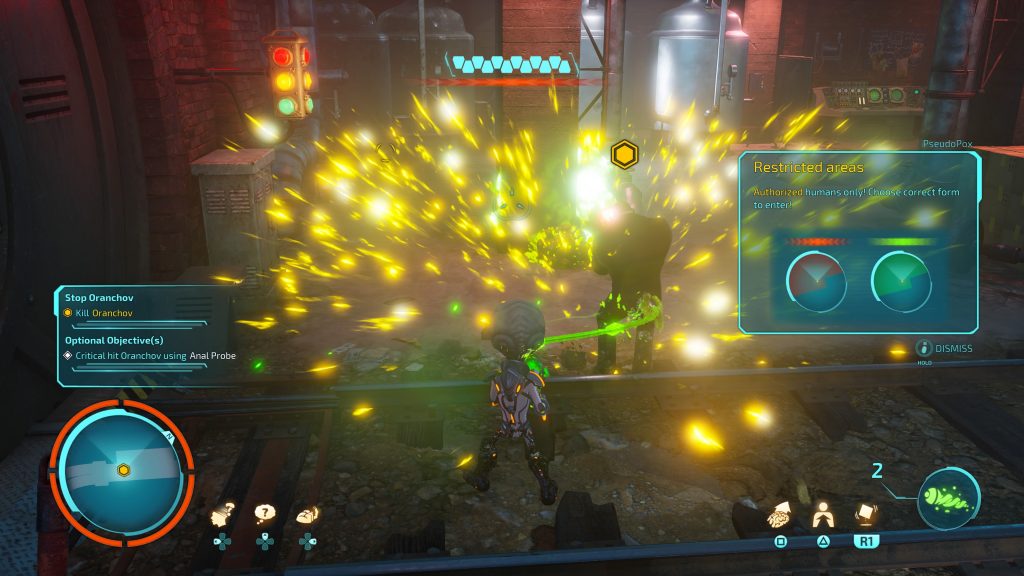 The plot takes place within the Cold War. The KGB are trying to disrupt the West with some new, alien technology. Crypto, our Furon protagonist is out for revenge. Not out of a sense of duty to the human race but because the Soviets trashed his mothership. He’s stranded on Earth and the locals aren’t especially helpful.

What follows is a fairly fun globe-trotting adventure where the KGB act as the main opposition. They have bases around the world and they all appear to be very active. Begrudgingly, Crypto is saving the world but he’s not doing it alone. Natasha, a double agent provides a lot of back-up and gives Crypto someone to crack wise with.

The writing remains intact with Crypto’s Jack Nicholson impression still striking a chord all these years later. I was pleasantly surprised how well most of the jokes landed and the interplay between he and Natasha works nicely. I’m not a big fan of the ‘far out’ hippy caricatures but I appreciate how daft and consistent the tone is. They’ve created a silly and fun world that still manages to hold up.

I did worry the dialogue would grate but the script seems to be weighted enough to keep the tone light and playful. The player has a little agency in how conversations go. I preferred to get to the point but there’s plenty of quips and alternative choices which can hand out more humour. 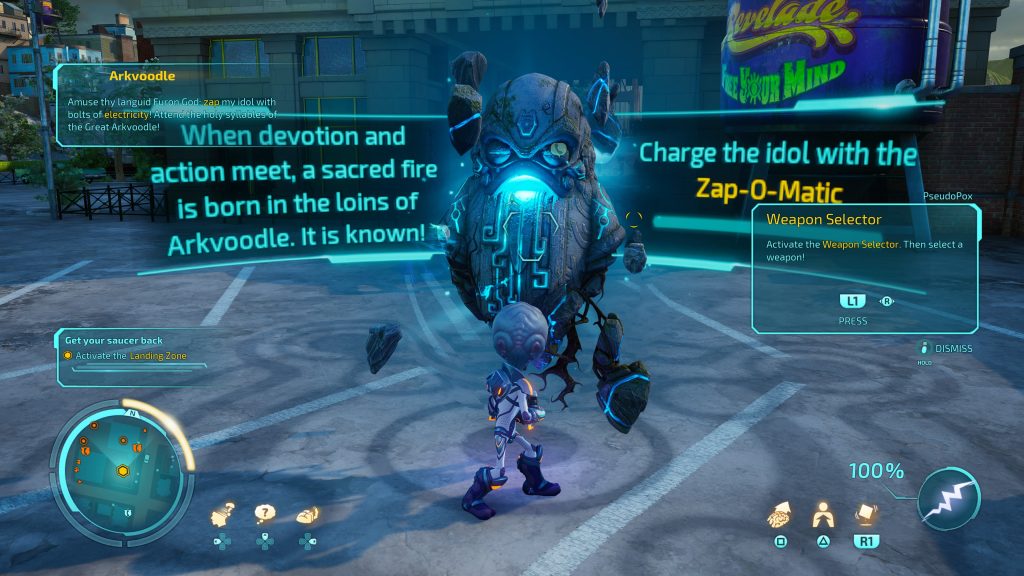 Gameplay also remains untouched. Destroy All Humans! 2: Reprobed is essentially a third-person action adventure similar to Ratchet and Clank. Crypto has an array of wacky weapons that often carry an extra-terrestrial twist. Combat feels responsive and mission design does mean things are kept varied throughout a swiftly-paced campaign. Staying on the beaten path leads to a story mode that’s about 8-10 hours in length and upgrades are handed to you at regular intervals.

The Bay City area seems to go by very quick with missions being over in minutes. Each mission has a secondary objective but even those didn’t stretch my time too much. What this brisk pacing does is make boss fights feel more of a slog. These crucial encounters don’t happen too often but they do tend to feature spongy enemies who will soak up damage. Crypto himself can feel sometimes fragile, even with regenerating health. A mob of enemies can make short work of him so using a dash and jetpack to escape trouble feels essential.

There’s other diversions to pursue. There’s collectables scattered in each map and weapons can be upgraded to improve their effectiveness. Your ship can be improved and can be used to abduct humans to improve your psychokinetic abilities. As quick as the campaign can go by, there’s plenty packed within it.

Mission design is strong enough to incorporate all these tricks. One mission has you bodysnatch a bystander to infiltrate a party. Some mission givers won’t even talk to you without the correct disguise. Escort missions will occasionally make use of your ability to make others blindly follow you. AI path finding can be a little unresponsive but I didn’t find that annoying. By the end of the game, I felt comfortable with the tools I was given and was finding it necessary to switch weapons for the right occasion. You feel powerful and can really experiment. 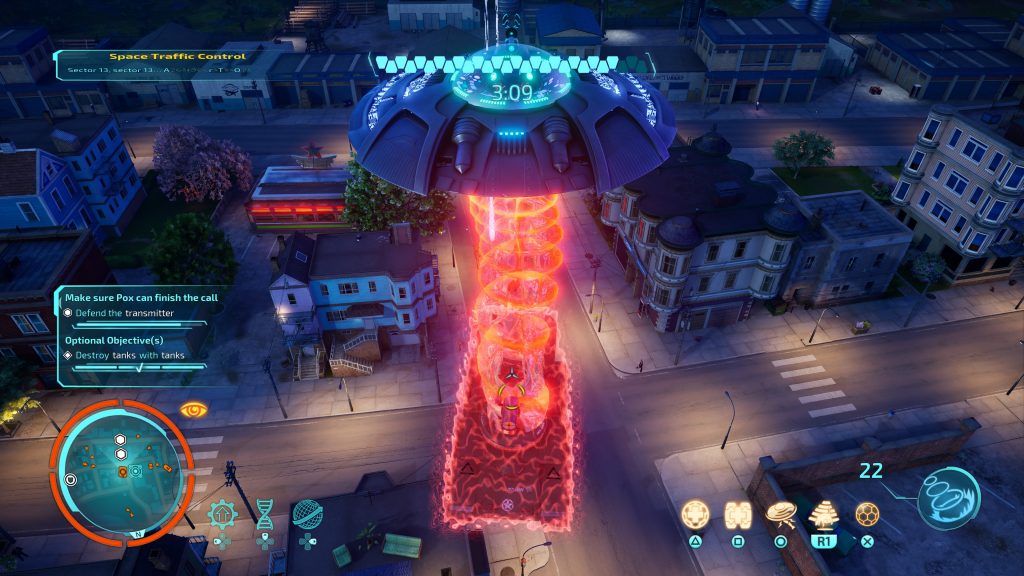 Multiplayer is a lot more rigid. You can only team up locally and with a few scant modes to choose from. Playing the campaign with a friend sounds like a good bet but the duel and PK Tennis modes feel fairly forgettable. I’m surprised there’s no online options, given that they pushed out Destroy All Humans: Clone Carnage ahead of this release.

I’ve really been surprised by Destroy All Humans 2!: Reprobed. Not only is it a big visual overhaul but the original writing appears to largely stand the test of time. I’ve had a lot of fun playing with Crypto’s powers and the campaign does feel diverse and swift enough to maintain my interest. It’s a pity online multiplayer is off the menu and the local options feel very bare. Still, as someone coming to this for the first time, I enjoyed it.

Destroy All Humans! 2: Reprobed
7 Overall
Pros
+ Colourful and polished visuals.
+ Funny, clever writing.
+ Varied gameplay with some inventive weapons.
+ Swiftly-paced campaign.
Cons
- No online multiplayer.
- Crypto can feel fragile in combat.
- Load times can sometimes feel oddly placed.
- Boss fights can become a slog.
Summary
Whether you're coming to Destroy All Humans 2!: Reprobed fresh or as a fan of the original release, there's a lot to like about this package. The work that's gone into remaking the game's locales and assets has been really well done. Whilst it can definitely feel like a game showing its age, the writing remains funny and the gameplay is fun. Multiplayer is hampered by keeping it local and I do find the boss fights go against the game's brisk pace. Still, it's a surprise to me that this can hold up after so long.