Destroy All Humans! is a series I’ve never delved into but their homage to the 50’s B-movie aesthetic did seem charming. Since their heyday on the Playstation 2, THQ Nordic has acquired the rights in an effort to bring some attention back to the murderous grey invaders. Before the repackage sequel arrives, Destroy All Humans!: Clone Carnage arrives showing off some of the multiplayer modes of upcoming release. 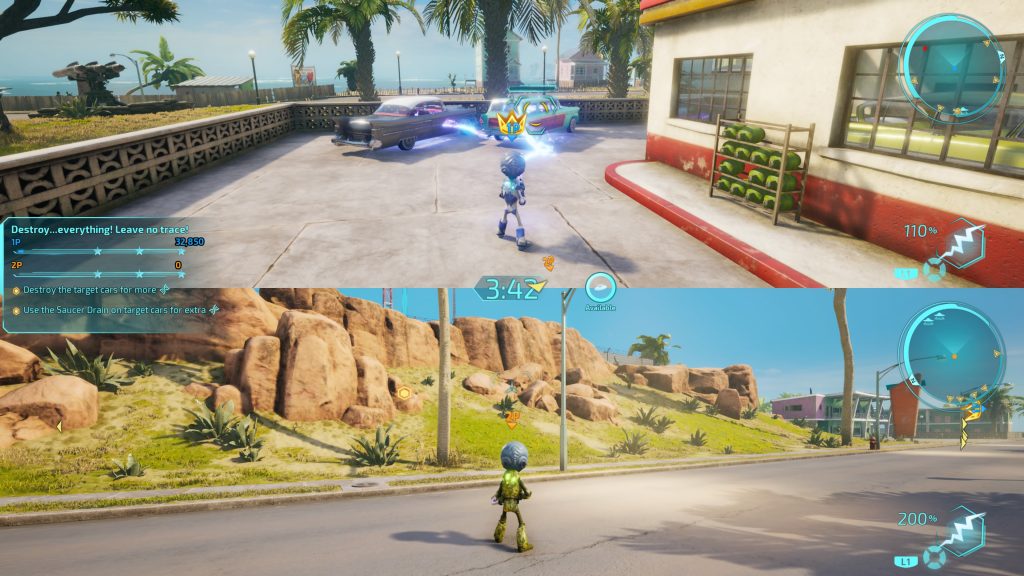 There’s just a few modes in Destroy All Humans!: Clone Carnage. All modes are playable cooperatively, as well as against other players. Rampage tasks you with destroying as many humans as possible. Racking up a body count can be brainless fun and it does allow you to test out the weaponry. Some humans will fight back as the round wears on but the affair seems relatively low stakes.

Armageddon takes the destruction up a notch as you’re tasked with creating as much damage as possible. Sadly, not every thing can be destroyed. Vehicles are mostly how you’ll rack up score. Bizarrely, I don’t see many humans in this mode. The stage can feel very barren as you wait or scour the arena for new things to break.

Abduction is, as you’d expect, all about kidnapping. You can send living things and machinery to your flying saucer for points and it does appear to be the most involved of the activities. You can coax and direct terrified humans into the beam but I tended to just grab whatever I could find for the sake of getting points on the board. 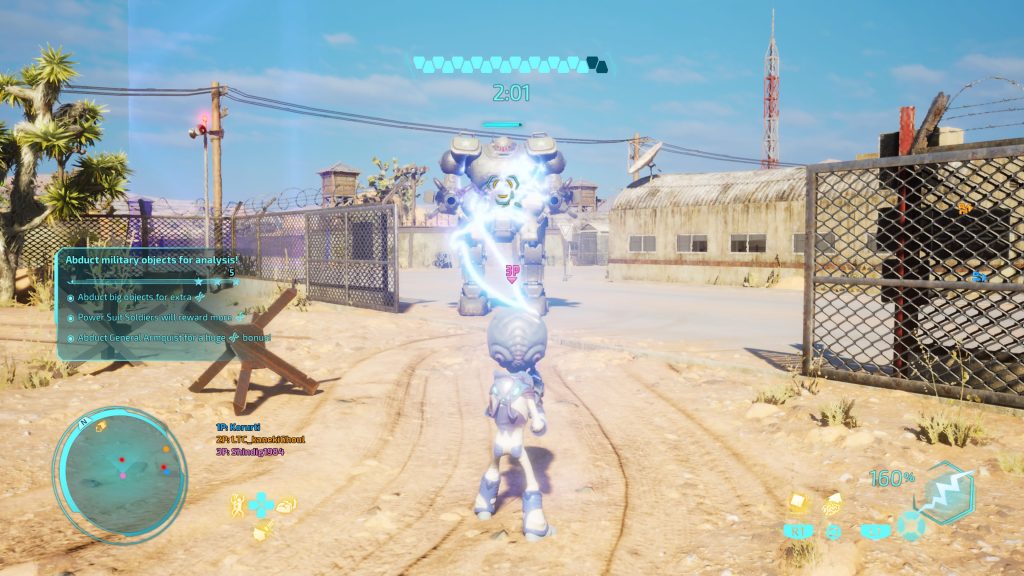 Finally, there’s a Race mode which tasks players with jetting through a series of rings on the stage. Not my favourite excursion but it does at least give you something to focus on beyond murder. As in all modes, you’re against the clock and the placement of the rings does give the areas a nice sense of verticality.

Before you can dive into these modes, you can select your loadout from a dozen different weapons. There’s a decent variety to them. Most of my time has been spent using the standard blaster but there’s beam weapons that latch on to enemies, electricity weapons that spark out death and some that deal damage over a wide area. They seem to work best in certain situations and at least give repeated rounds a mild sense of variety. All skins are unlocked from the beginning so you can at least have some customisation in how your alien looks. There’s some fun ones in there from Elvis impersonators to pirates, but it doesn’t go much deeper than that. Given how small this product is, that’s fine. 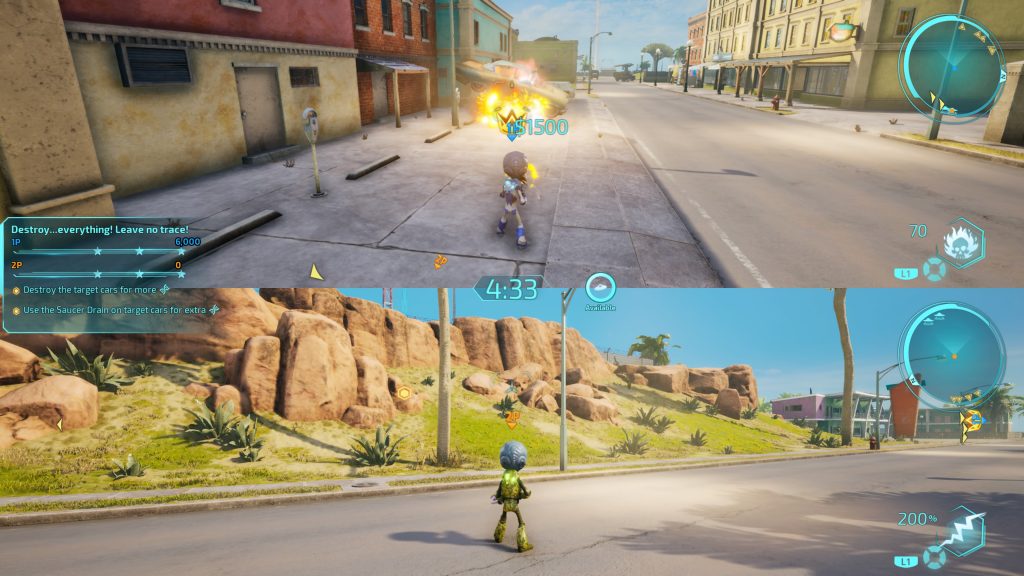 The controls work well enough. You have basic movement complimented by a dash and a jump button. Holding jump activates your jetpack which can give you temporary levitation. Holding dash allows you to skate which gives you quicker traversal on foot. It’s showcased well in the races but the other modes seem to have less need for it.

Online multiplayer is present although I have genuinely struggled to find players to roll with. A couple of weeks after release, your best bet is to look towards local opposition. On the few matches I have found, the connections hold strong and it performs fine. It’s already struggling to maintain a community but it could be down to this game’s budget price tag and the fact it’s not a more fully-fledged release.

Presentation is predictably slim but the visuals and sound do a good job of getting the tone across. It remains light-hearted, very bright and colourful. Weaponry looks suitably devastating. The map selection feels diverse, although they’re maybe not suited to all modes. The music fits the B-movie approach and the human chatter does well to convey a daft sense of fear. 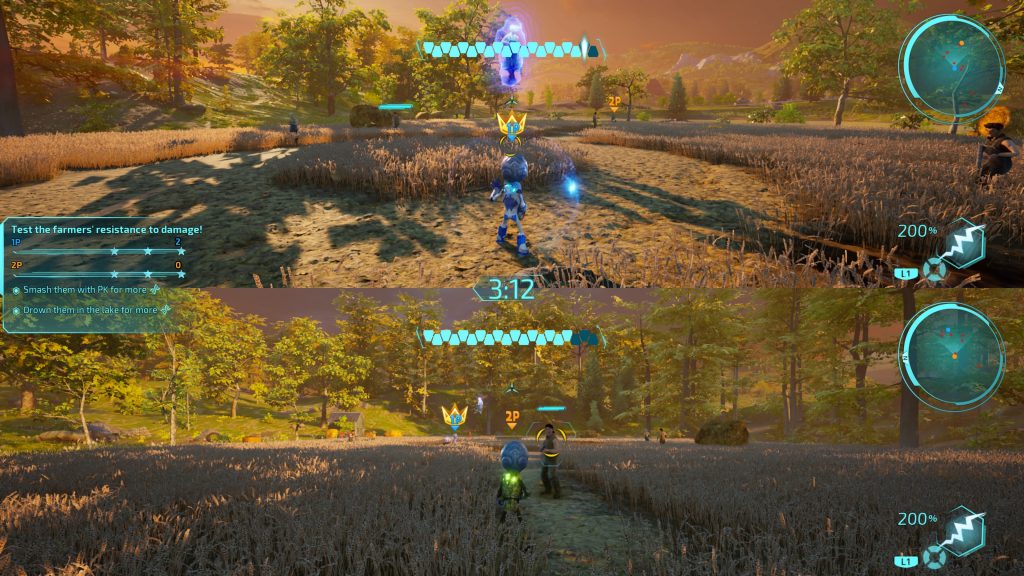 Menus feel fairly basic and the text-based instructions sometimes feel a little inadequate. There are plenty of options for control sensitivity and the like, but the whole product feels a little unnecessary. That’s really my big concern with this. It’s a product pushed out ahead of a much more anticipated release but it doesn’t really invite much excitement. It’s a stop-gap that doesn’t really have the polish or content to make it worthwhile.

Unfortunately, Destroy All Humans!: Clone Carnage just feels like a paid demo released in anticipation of the sequel’s impending re-release. One can assume this showcases the multiplayer suite that’ll accompany the solo experience. On it’s own, even with a £10 price tag, it feels like a small, barren experience.

Review 0
4 Overall
Pros
+ Looks visually colourful and bright.
+ Plenty of weapons to tinker with.
+ Carries plenty of the series' charm.
Cons
- Really light on content.
- Online lobbies are already barren.
- With everything unlocked, there's no sense of progression.
- Menus and other aspects of the presentation appear really basic.
Summary
Inessential. That's how I'd describe Destroy All Humans!: Clone Carnage. It feels like a placeholder between games to keep the fans simmering over and I'm not even sure they would be satisfied. Online lobbies are already deserted so your chances of any joy might have to stay local. Even when I found a match, the lack of content means I'm struggling for reasons to stick around. It looks nice but some of the maps feel fairly empty.