Let’s get the obvious out of the way first. Cloudpunk, from Berlin-based developer Ion Lands and publisher Merge, is very much aping the neon lit vibe of Blade Runner. RIght, that’s done with. There’s another cinematic feel we got from the way traffic interacts with you and flies at multiple levels. It reminded us a little of The Fifth Element, though your courier named Rania that works for the titular courier agency is rather more ladylike than Bruce Willis.

In essence, Rania has fallen on hard times and finds herself with no alternative but to drive a HOVA, there’s a backronym for that that comes up in conversation as we recall. In essence, it’s a hovercar just like in countless scifi works from The Jetsons or any number of similar dystopian futurescapes. The key to traversal is to try and stick to the lit highways where possible as they allow you to travel that bit quicker than if you decide to zip between buildings. 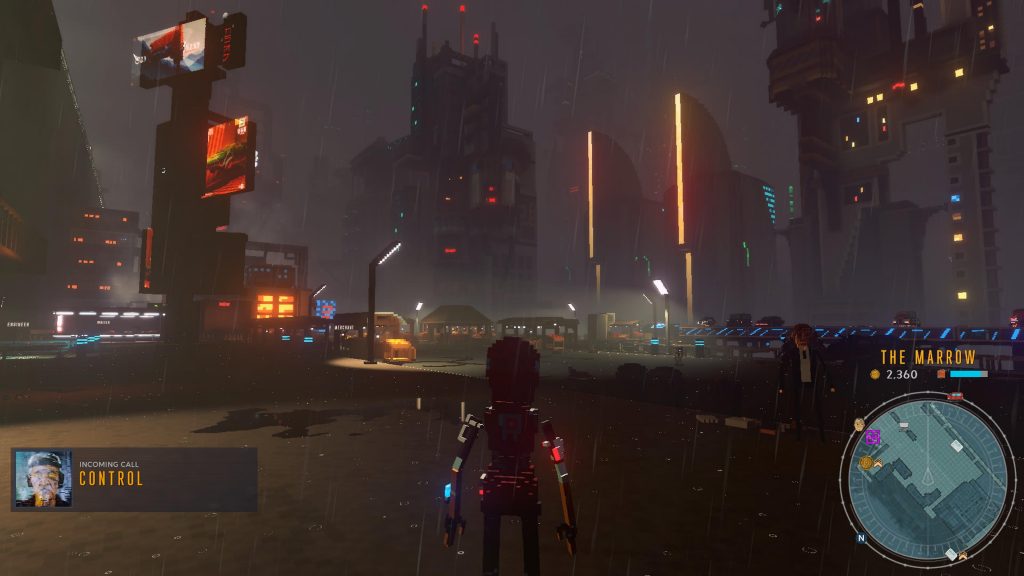 Personally, the higher we flew, the more of a Mega City One vibe we got from the crumbling city of Nivalis. Perhaps that’s down to the distinctly English flavour of the script, the country that is, rather than the language. This also extends to some of the collectibles mentioned, though we’ll spare you the details so you can find them yourself.

Cloudpunk came out on PS4 back in October 2020 and somehow entirely passed this reviewer by for whatever reason. Perhaps it was due to the usual rush of releases around that time or limited marketing budget. Though we recall the games release slate felt rather barren while the industry held its breath and waited for the PS5 to launch, Ray’s The Dead being our focus at the time. At any rate, what a gem we missed back then. 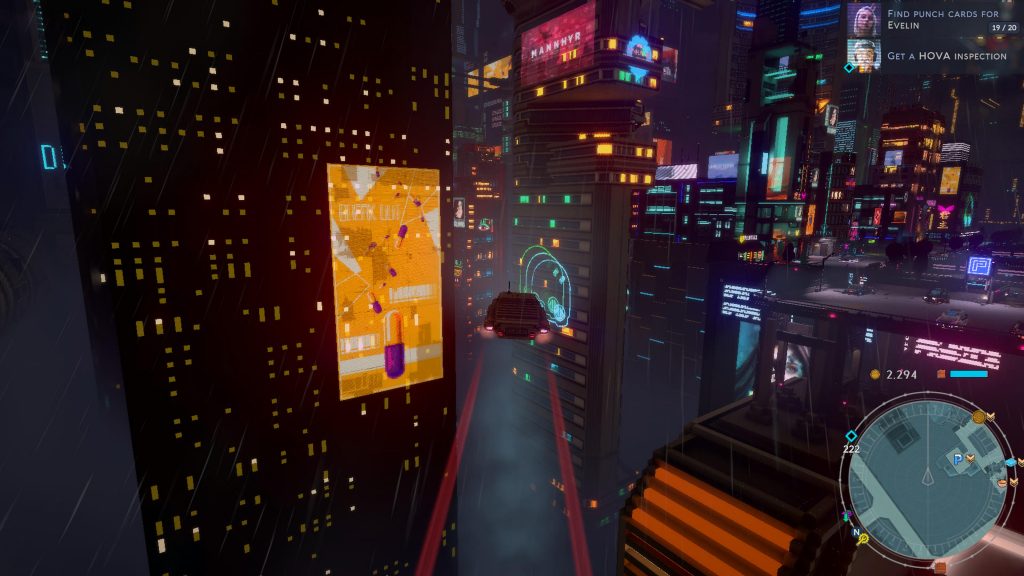 The voxel graphics do a great job, even on a standard 1080p set that this reviewer was stuck with a couple of days while our usual set was packed for a move. Playing Cloudpunk‘s PS5 iteration on our 4k set was nothing short of revelatory. The screenshots give you some idea of how good looking this game is. In motion it is often nothing short of spectacular.

Your main contact is a cranky controller at Cloudpunk HQ, he sends you the various missions as well as filling in some of the background lore regards the almost deity-like chief antagonist. That being the AI construct CORA. We got a bit of an Otis from Dead Rising vibe, only slightly less hectoring than him thankfully. 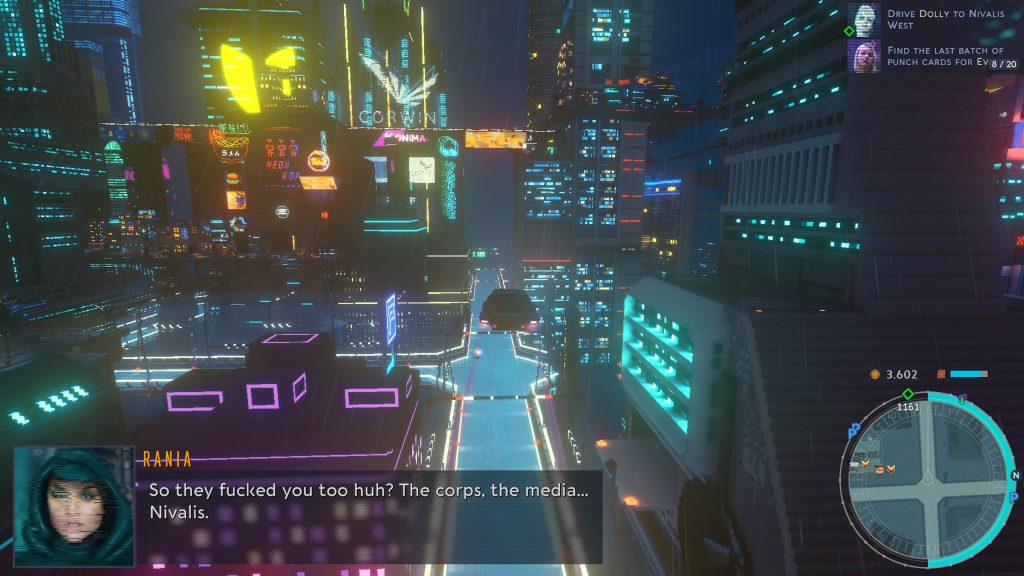 At points in the story you’ll have binary choices to make. They’re generally clearly the right or wrong thing to do in most instances, though on occasion the outcome will be a little more ambiguous.

The core gameplay loop is get mission, fly to NPC, take item to destination. This isn’t quite Crazy Taxi as unlike Sega’s glorious yet ultimately shallow coin-op, you actually have to disembark your vehicle on a regular basis. The downside of this is that the minimap preview in your HUD isn’t always the clearest and unless you get lucky and fly over a parking stand or lot, you’ll have to resort to viewing the map proper to find a landing zone. 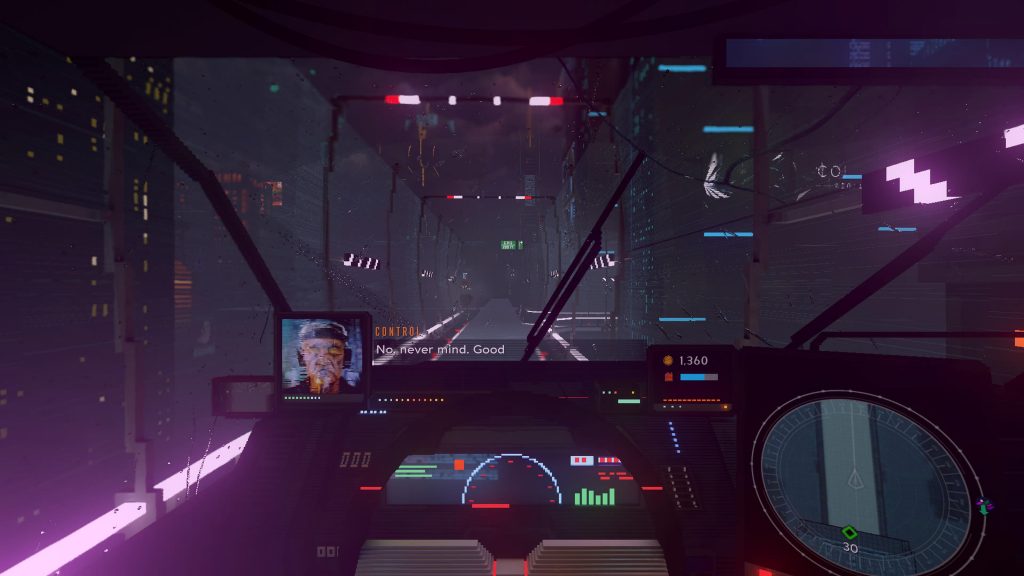 More often than not you’ll find the objective you need and end up a fair distance away when you actually end up parked. It’s a bit annoying at times, especially when you have to negotiate all manner of catwalks and elevators to get to your destination. You can switch to a first person view while on foot if you wish, but we found it to be a slight hindrance. The newly added on consoles in-HOVA view rather than chase cam is great fun, but perhaps a little disorientating if you use it before you’ve got used to the controls.

While you’re on foot you can pick up collectibles and trade items, highlighted in white and blue on the minimap respectively. The collectibles include instruments and obsolete games software, whereas the trade items are mostly junk. On occasion you can repair elevator or similar, so it’s worth keeping a couple on hand. 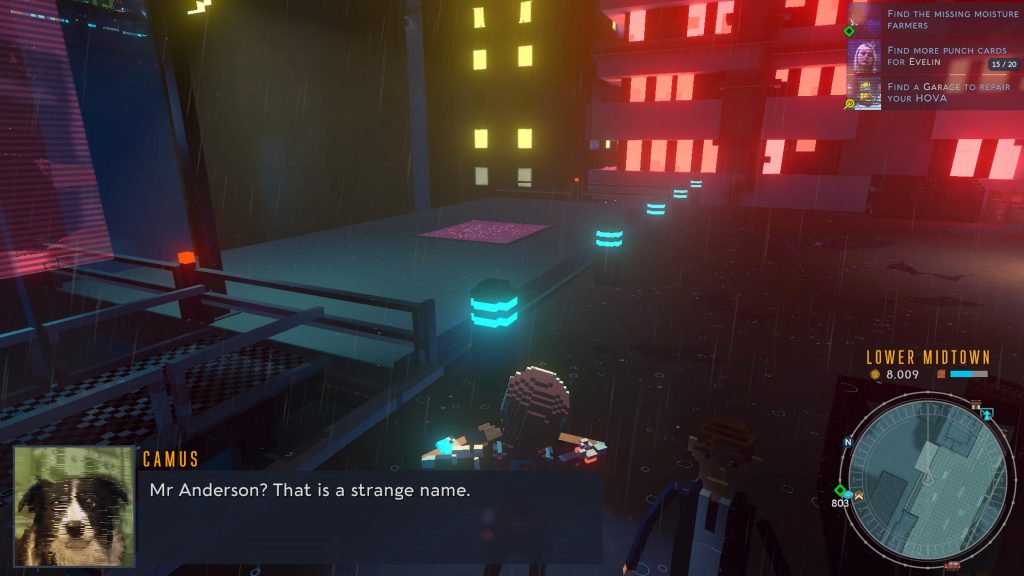 A weird little quirk when you travel from one area to another is that it resets your altitude to be the same as that of all other traffic. This has the side-effect of multiple collisions as NPC HOVAs drive into you as you appear at their height. At this point you’re introduced to the damage model, though we struggled to notice if there was any damage gauge. You’re prompted to land at one of the freely available repair stations where you can also upgrade your HOVA.

As you go about your business, you’ll encounter various characters, some allies, some antagonistic. Highlights for us included the weary gumshoe Huxley and the gang members. We’ll spare you once again for you to enjoy them yourselves. The voiceovers throughout are very well done and often funny. 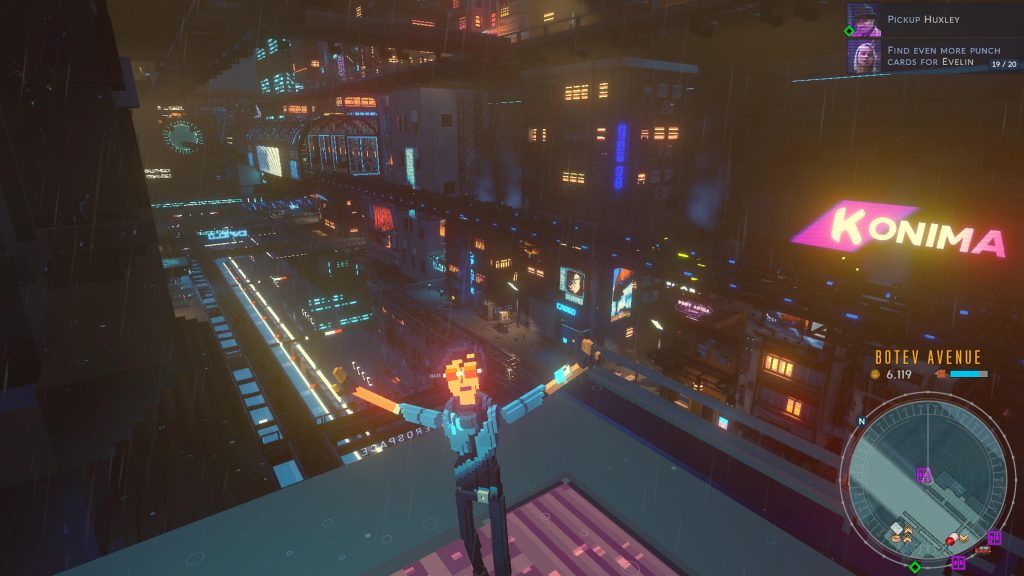 Before we wrap up, we notice Ion Lands are in the process of developing a semi follow-up to Cloudpunk, consider us well and truly interested in Nivalis, set in the same city.

In conclusion, we had a blast with Cloudpunk. The PS5 draw distance and rendering upgrades have turned an already good looking game into one that is amazing to look at in motion. The story is very well done with a great script and well delivered voice acting. Most importantly the core gameplay loop is such that we had to switch off well gone midnight on several occasions.

Cloudpunk
9 Overall
Pros
+ It's just beautiful and the PS5 upgrades are truly impressive
+ Very well scripted and voice acted
+ The HOVA driving model is well implemented
+ Core gameplay loop is compulsive
Cons
- Only really comes into its own on a 4K TV
- The in-cockpit view can be a little disorientating
- Altitude reset on changing areas causing crash is an annoyance
- Running around on foot can be a bit samey
Summary
Cloudpunk is a truly impressive game, without even taking the PS5 updates into account. Graphically as close as we're likely to get to a Blade Runner game without an official licence being a thing. Often funny with a well written script, this is well worth your time. The on-foot sections can be a bit samey, but that's about the only moment we didn't enjoy here.