We’re huge fans of Hopoo Games’ previous PSN entry, Risk of Rain,  and so we were pretty excited about getting our hands on the latest effort from the small American dev studio.  The games have little in common beyond being 2D titles with pixel art stylings, the previous title being a manic roguelike platform shooter where as Deadbolt is a slower paced affair that requires stealth, patience, planning and accuracy if you want to get through the game’s very challenging 35 levels and it shares a lot of characteristics with Not a Hero.

You play as Death himself and are tasked with dispatching your enemies who happen to be undead types who have no intention of going into the light and so need a little incentive.  Death’s not incredibly well equipped for the task though.  You’ve got a primary and secondary weapon but your enemies are generally armed and one shot will kill you, which isn’t always the case for them.  Going in through the front door is generally going to get you killed, leading to a quick restart which takes you back to the very start of the level.  There are no checkpoints here and you will die.  Often. 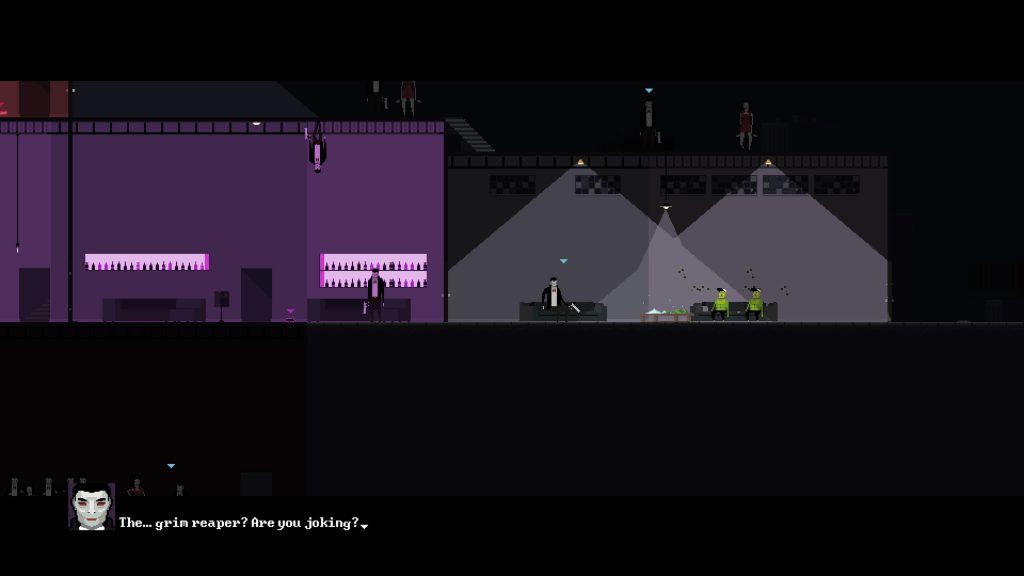 As the game progresses, the levels get a lot trickier.  They are all relatively small though, so exploring isn’t the problem but rather the sheer ruthlessness of your enemies, their positioning and a chronic lack of ammo.   Invariably you’ll start outside and will sometimes have options.  You can go in through the front door and take your chances or maybe use a vent to drop in behind enemy lines (curiously, Death’s only supernatural ability is that he turns into a small cloud when entering vents).

The thought process behind any successfully completed level is to divide and conquer.  Take your shots when they are available.  Knock on doors or drop into the enemy’s line of sight to draw foes away from groups they are in.  Use vents to get behind potential targets and be patient.  Levels can take upwards of 40 attempts to get right and each new enemy type that is introduced will add some additional difficulty. 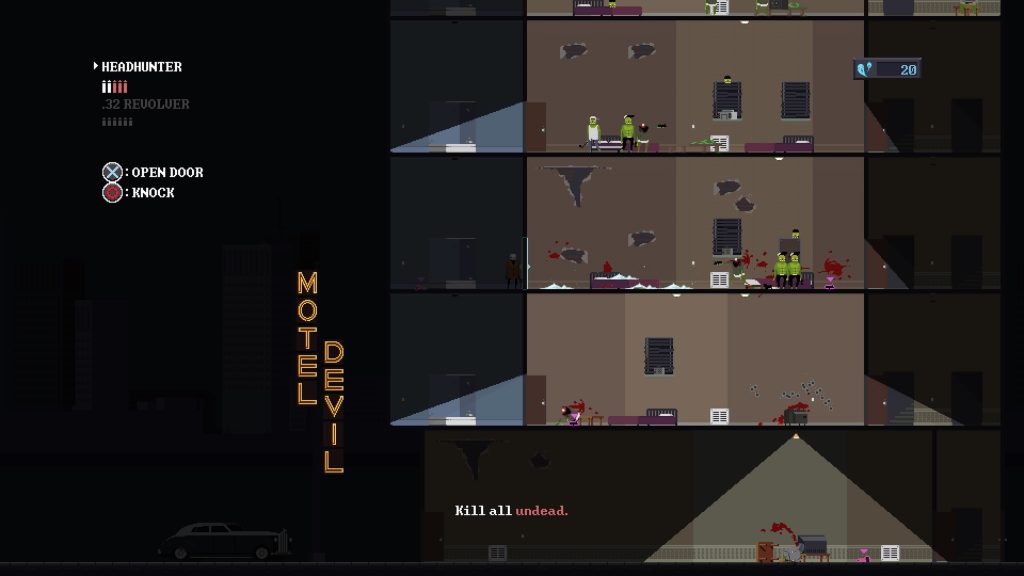 Between levels you can purchase weapons that increase your stopping power or accuracy but there aren’t that many options and only a few of them are helpful.  Also they are pretty costly so you won’t be experimenting much as you can’t sell guns back and you can’t farm earlier levels for money so there are no shortcuts here.  If you want to get past a level you’re going to need to put the time in.

For the most part it works.  The game is unforgiving but you do feel like you are making progress as you figure out the best strategy for the level that is currently giving you headaches and when you beat it the satisfaction is real.  Where Deadbolt lets itself down a little is in the little gameplay details.  I generally carry two guns with me (rather than melee weapons, although these can be very useful) and one is more powerful than the other.  Sometimes a headshot with my weaker gun will take off an enemy’s head but other times I can waste three or four bullets from my stronger gun on the same enemy because my aim is apparently off even though to me it looks like I’m nailing the shot completely.  This can be annoying at the end of a difficult, complex run which finishes because a basic enemy survives, Pulp Fiction style, miraculously.

It doesn’t happen all the time but I do wish the game would just put the aiming a little bit more in the player’s favour.  Also, while trophies won’t matter to most players, the hardest ones here are particularly prohibitive.  Getting five stars on every level for example.  I’ve never gotten more than four.  Even on level one where I got eight kills with eight headshots.  And as for completing the game in one sitting without dying?  I can see that staying at 0.00% potentially forever.   The same goes for beating the whole game in one hour.  Time will tell of course but currently they seem like terrible choices.

Deadbolt gets a lot right though.  The levels may be close to hateful but they are beatable with the level design being decent and my numerous failures do indicate how addictive the game is.  Each new level is a potential nightmare but I never got that feeling that games like Darksiders give me where I beat a stage and then my heart sinks as I see the next one.  Deadbolt is never a chore but it can be a son of a bitch. 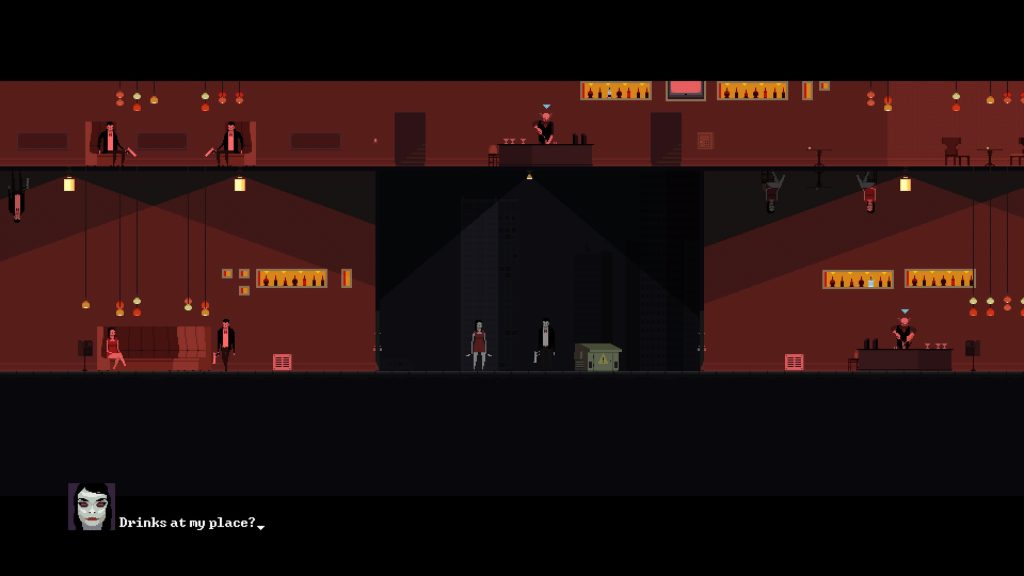 When it comes to presentation, the game does a few more things right.  While Not a Hero is the game’s most obvious peer, Deadbolt stops a bit short of that game’s absurdist excesses.  The 16-bit pixel art style is a tad drab but suits the gameplay and the story and never gets in the way of your planning but the majority of props need to go to the soundtrack.  Chris Christodoulou’s soundtrack is possibly the best we’ve ever heard in a game, even topping his great work on Risk of Rain.  I even went to the credits (which feature a fun little sniper minigame) before I played the game to make sure he was involved.  It’s truly fantastic work.

To be honest, the music kind of makes the price of entry here worthwhile but the game is no slouch either and it has its hooks into this reviewer.  Would I prefer it to be a tad easier?  Yes.  I’d like a few more weapons to pick from too (or at least a way to preview them) but as someone who doesn’t get on with games that put high difficulty front and centre of the experience, I’ve got very few complaints about Deadbolt and will definitely be playing it again after I hit the publish button on this review.

NOTE:  this review is for the PS4 version only.  The game is cross-buy but we reviewed a different region’s version, so we couldn’t test the Vita one as that’s region locked.

Deadbolt
8 Overall
Pros
+ Difficult but well-designed levels
+ Fantastic music
+ Addictive and satisfying gameplay
Cons
- May be frustrating for some
- Visuals are a tad drab
- Controls can sometimes let you down
Summary
If you can handle a challenge, Deadbolt's mix of stealth, shooting and strategy is well worth checking out.