Kingdom Come: Deliverance has just come out on the PS4, an ambitious open world RPG with similarities to both the Elder Scrolls and The Witcher. To make such a large game with Kickstarter backing is quite a brave move, but how close have Czech developer Warhorse Studios come to toppling the big names in the genre? 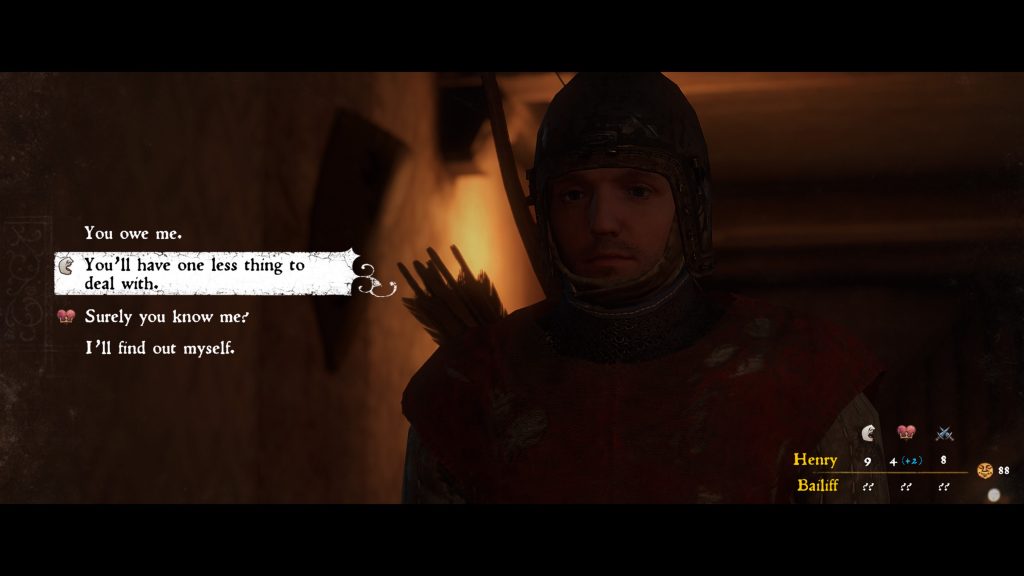 Unlike some other RPGs you’re given a named character with a set character model. You play as Henry, the son of a blacksmith in a small but silver rich town in 15th century Bohemia. After a brief tutorial section, spending the day helping your dad at the forge, things go awry and the town is attacked by an army. Henry manages to escape on horseback to a nearby castle and warns them of the oncoming army and so his adventures outside of his quiet life in town begin.

Played from a first person perspective it’s easy to see elements of Oblivion or Skyrim as people go about their lives and you follow a compass at the top of the screen to find quests and landmarks, but really it has more in common with The Witcher 3. As you have a set character he can talk to people as opposed to being a blank avatar that people just give instructions to, the camera showing both characters in conversation. Bigger story missions have cutscenes that feature a lot of, surprisingly decent, acting. Unlike those games mentioned however Kingdom Come: Deliverance is proud of its historical accuracy, so there is no magic or dragons or elves.

As such I’ve heard people call it boring with few set piece moments. Sure there are bandits that roam the roads and some missions involve fighting but there are far fewer battles than you’d normally expect and they tend to be slower, more methodical affairs. Although you can fight multiple people at once you can only lock onto one person at a time, from here you can target five points (head, high/low on the left/right) and punch/swing your sword/mace. Your enemies can do the same and defending in the right area whilst attacking in the enemies exposed side is of utmost importance. Stamina management comes into play stopping you from constantly spamming attacks. 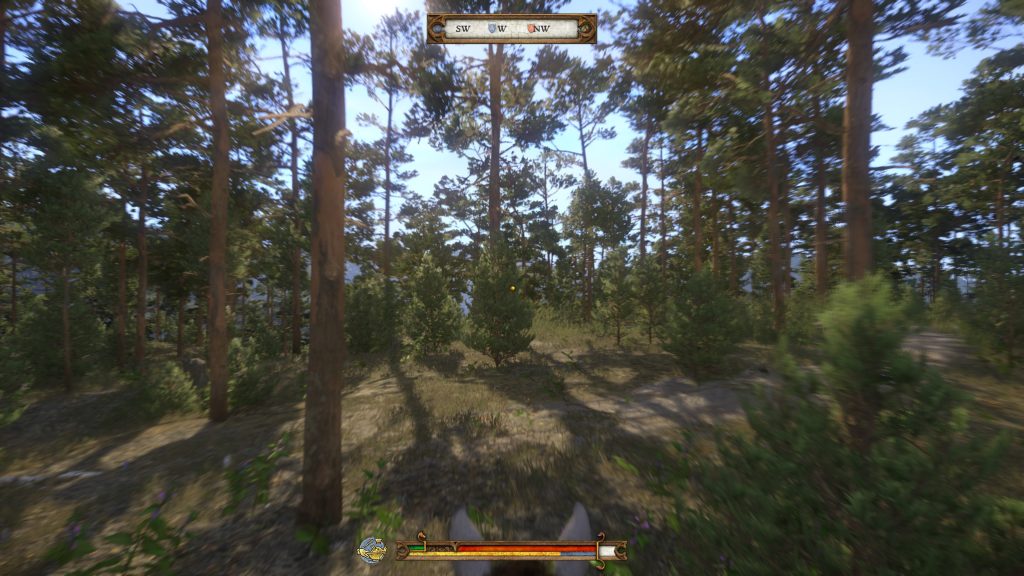 However, I generally tried to avoid combat. It’s fine, don’t get me wrong, it’s just that you’re given options. Similarly to Oblivion et al you level up abilities by using them. If you want to be big and strong get into lots of fights or pay for training. Stealth or the ability to talk your opponent down are equally as viable in many circumstances and will become more effective the more you utilise them. Lock picking, pickpocketing, reading, horse riding and herbalism are other skills that you may or may not look into using throughout your playtime. As you level each skill up you’ll also earn points that you can use to unlock perks. Some are positive, some are very strong but offer penalties like being able to run faster but running out of stamina quicker or running slower but having your stamina last longer. It’s up to you and your play style which ones you choose but I can see one person’s Henry being very different to another’s.

The realism doesn’t simply apply to historical accuracy, you need to maintain Henry. He needs food or his stats will suffer, likewise he needs sleep. If he doesn’t bathe he’ll get dirty or covered in blood and people will react to him differently. Individual parts of the body can be damaged and food spoils. It does make you think a little more about your questing, rather than in other games where you just play and play until real life gets in the way. If you think you’re going to be gone for a while then you should pack some food and make sure you’re well rested, similarly the time of day can make a massive difference with the darkness of night restricting your sight greatly, but also that of anyone you may encounter.

Speaking of quests I was very impressed with the variety. You will quickly gain a backlog in different towns to work your way through, from simple item gathering (meat or animal skins) to pickpocketing and more involved quests where you have to identify clues to murders or missing persons. A lot of the time you’re given a waypoint straight to where you need to go but there are times when the game asks a little more of you. There are plenty of missions to keep you distracted from your main quests and the game rarely punishes you for putting things on the back burner (though it can happen). 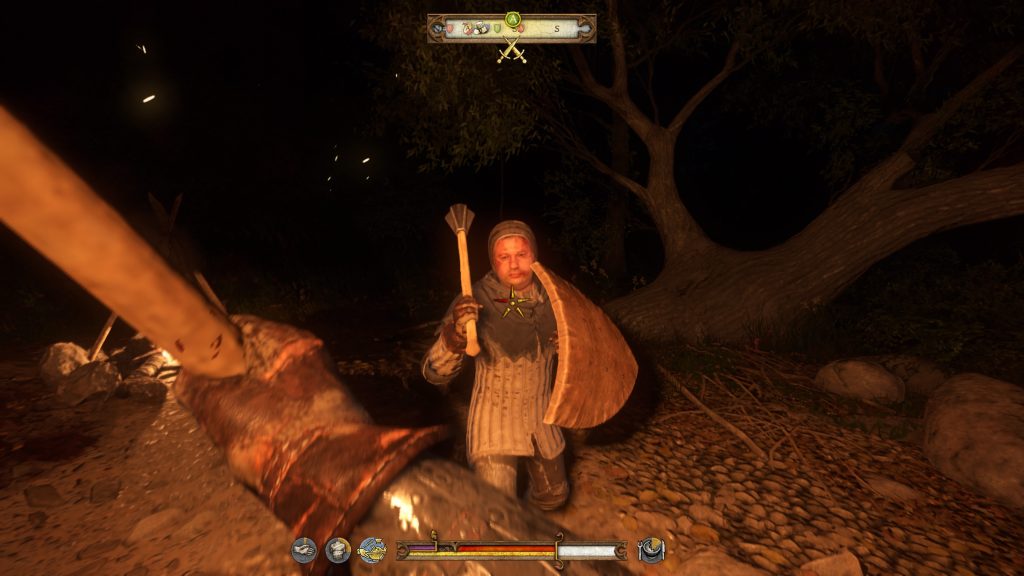 So the scope is great for a crowd funded game, what of the technical aspects? Well, here’s where things go slightly wrong. Not massively, not for me personally anyway, but this is where you can see a little more spit and polish is needed (and the devs are patching it regularly at the moment). The start up offers an incredibly long load just to get to the main menu, though the load into the game is more respectable if still not short. Graphics can be very nice, especially in cutscenes, but there’s also an element of jank that spoils the illusion. Character models load in pieces, textures load in slowly sometimes and the frame rate can also judder relatively often. I’ve walked past headless people, left my horse floating above a fence after a failed jump and had people follow me around as if I was trespassing whilst in a public area. Kingdom Come: Deliverance is not without bugs, there are reports of big game breaking ones too, but the ones I encountered didn’t subtract from my enjoyment all that much. Hopefully with more work even these can be smoothed out.

There are some design based negatives as well. The UI isn’t great, looking rather basic and not giving you all the information you’d ideally need. You can’t save whenever you like, you can’t even save and quit (although that is coming apparently). The game autosaves when you sleep in your own bed, when you start a quest (not when you finish it) or you have to use expensive, one use only items to manually save. Maybe they don’t want you save scumming but there were times when I couldn’t save because I couldn’t use my bed (Henry didn’t believe there was time) or afford the save item, so I’d just lose, not necessarily progress but exploration when I had to stop playing. Also, you may not be able to save scum but you better believe that if I think I’m about to go do something difficult then I go take a little nap to activate the save, so giving me an option in the menu would be far more helpful.

Tutorials are very weak, with elements not being explained sufficiently. Speaking of which the lock picking mini game is not enjoyable at all. You have to use the right stick to find the sweet spot and then rotate the left stick anti-clockwise whilst using the right stick to stay in that sweet spot as it rotates around. Even the very easy ones are nigh on impossible early on thanks to a poor explanation and sure, now I can do it and as I do it more my character improves as well making them easier, but at no point is it fun. Pickpocketing is far simpler but doesn’t give you a lot of feedback meaning you can fail for seemingly no reason and the interface is a little unresponsive. 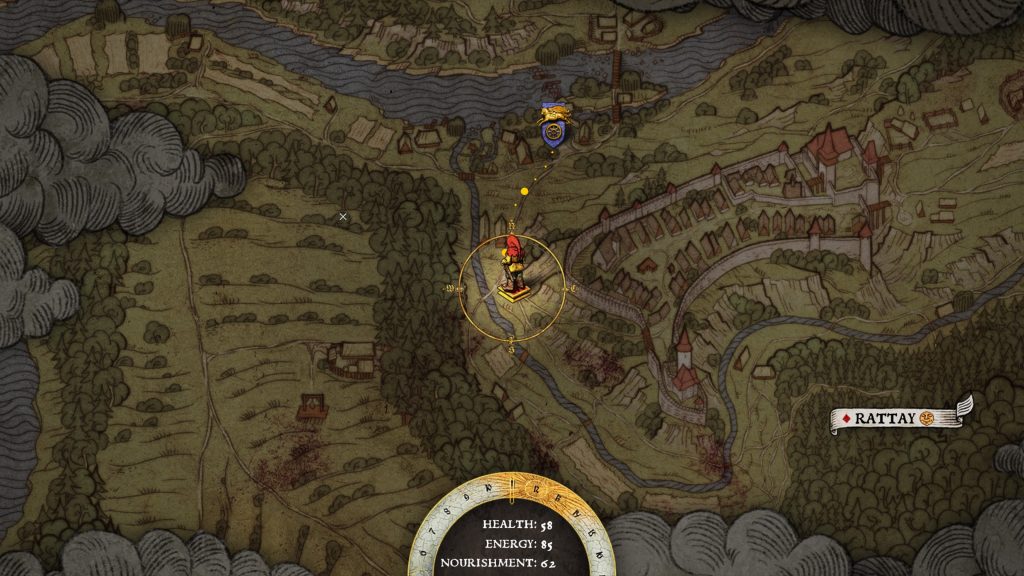 However, again I have to say that these things didn’t hamper my enjoyment too much. Could they be better? Of course, but roaming the land, interacting with nobles and peasants alike, skulking in the shadows at night and helping everyone I can by day has been incredibly engrossing. The slow pace has been enjoyable, allowing me to take things in my stride and levelling my character feels like it means something. You may want to wait a few months for the kinks to hopefully be ironed out but for those with a fondness for this style of game then whenever you do take a look you’ll be in for a treat.

Kingdom Come: Deliverance
8 Overall
Pros
+ A vast open world adventure
+ Acting is great
+ Realism works in its favour
+ Levelling is rewarding
Cons
- Buggy
- Some UI issues
- Stealth mini games aren't great
Summary
Kingdom Come: Deliverance is rough around the edges but offers an adventure worth taking for those who prefer a more realistic, slower pace to their open world RPG.