First impressions count for a lot. Initially when I started The Station, an unskippable cutscene and rudimentary static graphics didn’t exactly fill me with confidence.  This was after an extended load period where I had time to go make a cup of tea and come back. It might have been my venerable old PS4 struggling, but on the face of later evidence it seems that it was probably due to the now ubiquitous Unity engine chugging away to render the space station you’ll spend the entire game on.

You enter the dormant Espial station via an airlock (one trophy instantly unlocking) to no signs of life, barring the automated systems. 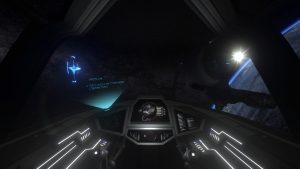 The Station is best described a space whodunit, in the adventure game/walking simulator genre, with your task being to find out what transpired by finding audio diaries and artifacts left by the Espial’s three inhabitants. They being named Aiden, Silas and Mila.

The space station itself is connected by a series of corridors, your access being initially limited to the maintenance bay (Aiden’s domain). Your first task is to gain access to Aiden’s office by returning tools to a tool rack which’ll return his ID bracelet and grant access. 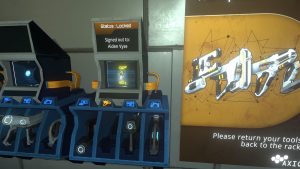 The few other areas are gated in a similar manner, accessed by finding Mila and Silas’ ID bracelets. Rummaging through lockers also bears fruit. Alright, just one keycard. So by fruit, well just a withered grape at the bottom of the bowl once everything else has been eaten.  You also have the lounge, maintenance, the bridge, medlab, the main hangar, engineering and a research laboratory. They all run off a central hub corridor. That’s pretty much it for areas you can access.

Then almost as soon as the game begins to hit its stride and the intrigue starts to build, it’s all over. You’re done. If you take your time, you might get two to three hours out of the game. I didn’t rush through for the purposes of this review and I had the credits rolling less than three hours later. A second playthrough to get the audio log trophy and 100% the game took me forty five minutes from start to finish. 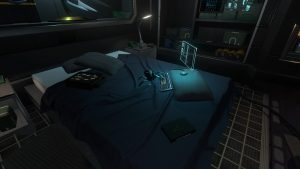 The Station is not a bad game, it’s just all over so quickly. It’s a piece of fluff, a pamphlet when you’re paying for a paperback novel.

By all rights The Station should be a PS+ offering. As it is, it’s out now for £12.99 ($14.99). It’s hard to see this as anything other than terrible value for money. At least on Xbox you got 1000 Gamerscore, here you don’t even get a platinum for your trouble.  Heck, even the terrible I Am Mayo has a platinum trophy.

If you want something atmospheric to play but with a bit more meat on its bones then go and buy The Turing Test instead as it has a similar feel, better puzzles and will entertain you for much longer for almost the same price.

Summary
The Station is an atmospheric mystery adventure set on a space station. However, the game is disappointingly slight and over just as it starts to get interesting.