It’s been a long while since I reviewed Dakar 18. I found that game to be ambitious but really difficult to breach with some clumsy navigational tools and a game that didn’t look all that hot. Time has passed and now Saber Interactive Porto have delivered a follow-up. It’s a noticeable visual upgrade and there’s some helpful changes to help get from A to B. Unfortunately, there’s a lot limiting this off-road racer. 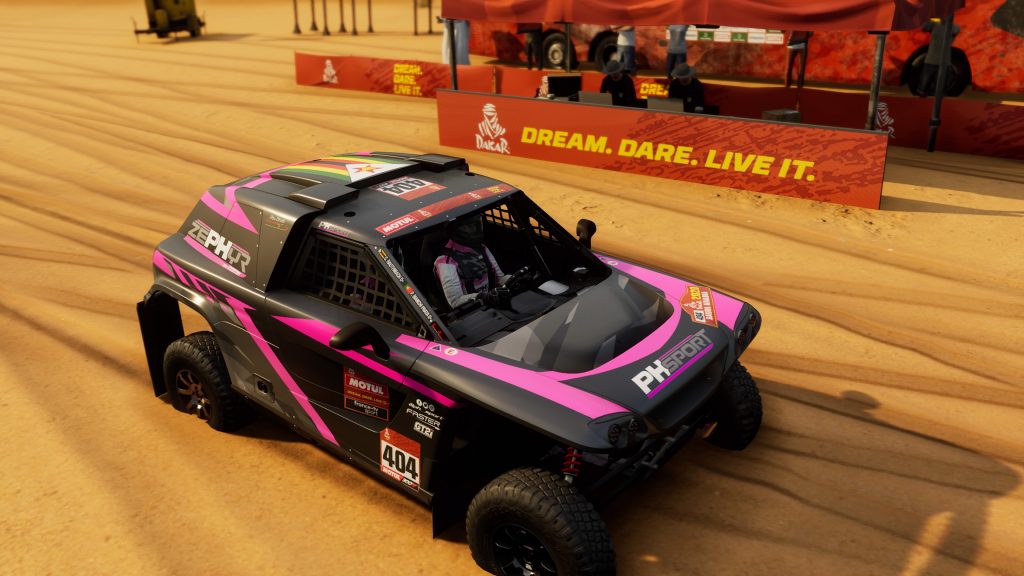 Dakar Desert Rally, despite dozens of stages, does lack modes. The only single-player offering is the career mode. Structurally, you have to qualify for the event before gaining access to a vehicle and taking on the event proper. These stages are all against the clock but the unique hook of the Dakar Rally is to navigate your way through waypoints along a wide-open environment. Events vary in length but success will grant you Dakar points which is your main currency. You gain this for finishes, validating checkpoints and little things like drifts and hitting top speed. It’s plentiful and this money can be used to buy vehicles and repair your current one in between stages.

You can practice these outside career mode but it requires you to load up a private online session and race against bots. There are no time trials or any explicit way to practice. Even the tutorial is based largely in text. Progress is tied to career mode so online mode is limited to whatever you’ve already unlocked. You can gain new vehicles from winning stages but these also need to run through qualifying before racing them in anger. I’m stunned this package is so limited. 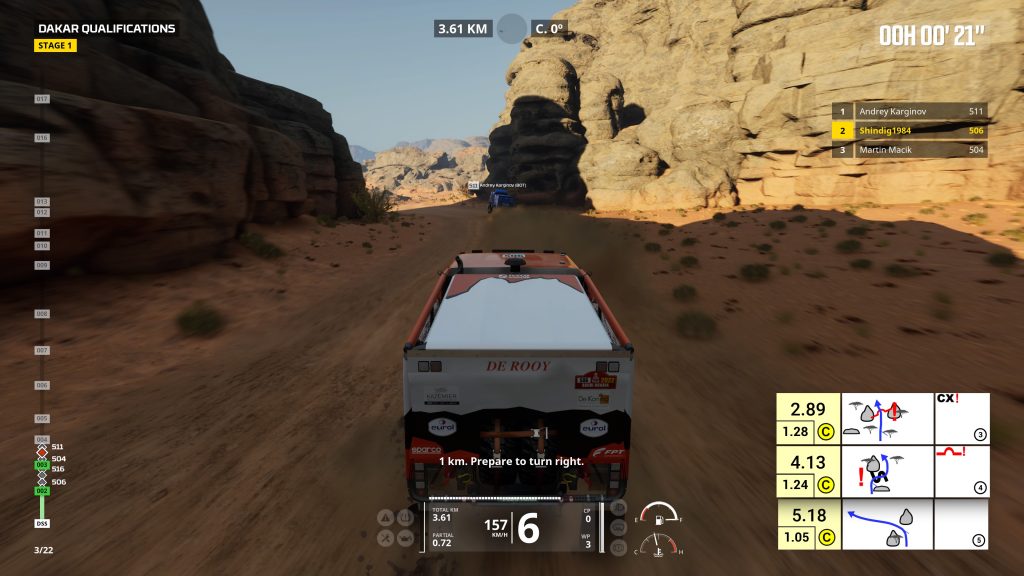 Navigation around Dakar Desert Rally‘s stages depends on what difficulty you opt for. Sport mode is the most accessible with the trek being undertaken on a point-to-point basis. Beacons indicate where the waypoints are and AI is scaled back to fairly comfortable levels. This does deliver a much more casual experience. Pace notes are no longer needed and you can approach the checkpoints in a more direct manner.

This difficulty also contains mass starts which leads to some combative opposition. Initially, the race isn’t so much against the clock as it is against other racers. It is the most fun I’ve had with Dakar Desert Rally, even if it does devolve into a fairly simple job. AI will take plentiful penalties and crash around you which, whilst visually appealing does inspire much needed moments of danger.

The more realistic Dakar experience lies within Professional Mode. Navigation focuses on the roadbook and your co-driver’s pace notes. I still find the book impenetrable to read but at least your co-driver can bark out the helpful information whilst you concentrate on driving. It works well enough and it does inspire caution as you rigidly follow their instructions. 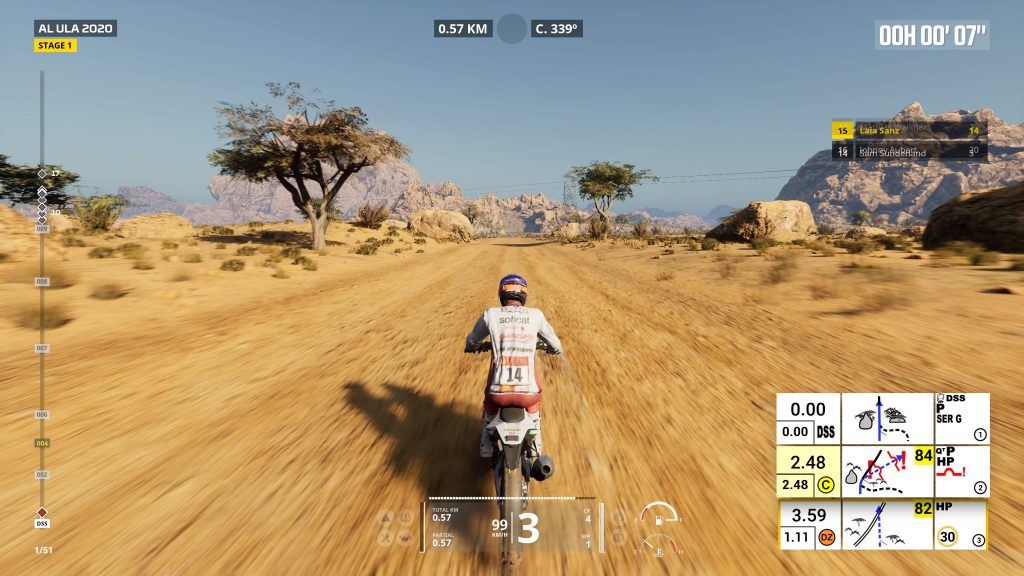 The HUD does its best to display compass headings and distance markers but the lack of a beacon keeps you slightly in the dark. Becoming lost is easy to do and your co-driver isn’t always great at pointing you back in the right direction. At best, he’s giving you a heading to move towards but he doesn’t act as dynamically as I would want. If you’re going in completely the wrong direction, he spouts some vague dialogue which isn’t particularly helpful. Backtracking is often my only course of action in the hope they spark back into life.

One of my main problems with the two available difficulty modes is that they’re not customisable in any way. I prefer Sport mode’s chaos but winning became trivial. The simplified navigation makes the race a mad dash to each beacon but I was never threatened to step it up a gear or think about self preservation. Crashing was a minor nuisance rather than a major setback.

The stages usually run long which gives you plenty of opportunities to recover time. It does result in a game better in short bursts but the course design makes great use of the desert landscape. Barrelling over dunes is fun and traversing rocky canyons can provide little room for error. Weather plays a factor with sandstorms limiting visibility and rain causing an already loose surface to feel treacherous. Lightning storms are wonderfully overdone and it does give each stage an epic presentation.

Handling naturally varies depending on which vehicle class you roll with. I began with bikes and, regardless of what class you choose, there’s an overall looseness to Dakar Desert Rally. It’s more dramatic on two wheels and I really felt the power going to the back as I tried to gain some traction. At speed, it’s not so bad but I did find myself making plenty of corrections to keep the thing pointed in the right direction.

Over dunes and drops in altitude, the bike’s always in danger of swapping ends on you and heavy braking would, more often than not, trigger a drift. Over time, I got better at anticipating those moments but they never truly went away. With trucks, the fear is rolling over and this really had me second guessing the landscape ahead. Cars feel more stable but the handling model never felt reliable enough for me to show some real confidence. 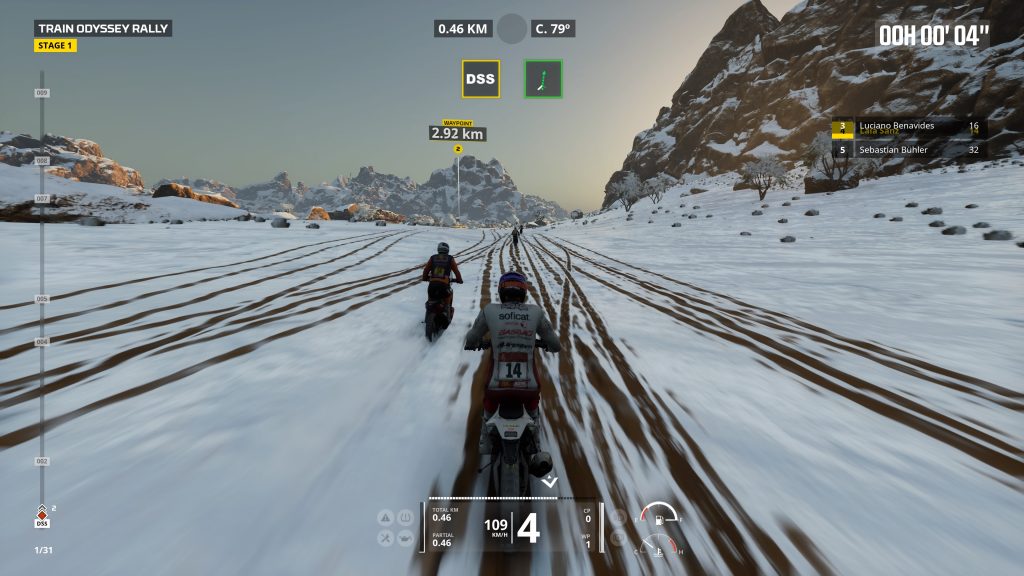 It’s a pity because one of Dakar Desert Rally‘s strongest aspects is the presentation. I’ve talked about the impressive visuals but they really add an epic sense of occasion to the racing. The amount of dust kicked up by the competitors really plays havoc with visibility and the propensity for crashes does make me give them a wide berth. The soundtrack is a booming orchestral effort that makes getting lost sound exciting. The rally itself is one of motorsport’s last bastions of genuine peril and this really heightens the stakes. Unskippable cutscenes do dampen the experience. Drawn out crash animations not only look goofy but take an age to spawn you back into the action.

Whilst Dakar Desert Rally takes some steps forward, the overall package is astonishingly limited. The navigation can be fun but the AI can be bothersome and downright thick. Visually, it’s impressive to see wide-open vistas and some great weather effects. Sadly, it’s saddled with a handling model that seems too loose for comfort.

Dakar Desert Rally
6 Overall
Pros
+ Visually stunning with some great weather effects.
+ Navigation seems more straight-forward and can be compelling.
+ Sport difficulty provides an enjoyable, causal experience.
+ Presented well with an epic soundtrack.
Cons
- Using the roadbook still feels somewhat impenetrable.
- Incredibly limiting from a single-player perspective.
- AI can be genuinely dumb.
- Handling is incredibly loose.
Summary
Dakar Desert Rally is an improvement for the series but it still wallows in some of the same problems. Visually, it's stunning with some wonderful views and spectacular weather effects. Unfortunately, the career mode really limits what players can do and drip-feeds content at a relatively slow pace. There's a real lack of modes and the racing is hampered by some poor AI. I never really felt confident with the handling model but at least navigation seems more straight-forward.