The Dakar Rally is, along with the Isle of Man TT, one of the last motorsport challenges I see coming from a by-gone era. It’s probably the greatest test of endurance within rallying and Bigmoon Entertainment have decided to represent the challenge. Not many companies take up the opportunity with Dakar 18 being the first effort since 2001. 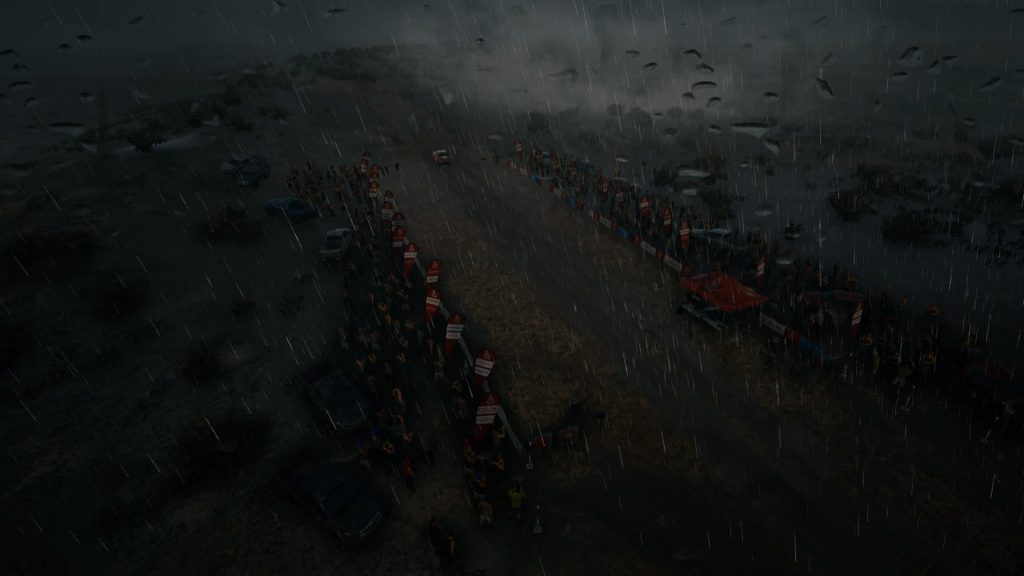 Boasting an unfathomable amount of terrain, the journey itself looks to replicate Peru, Bolivia and Argentina’s rocky sand dunes, muddy expanses and formidable valleys to have your truck, quad, bike or car tear through. There’s a lot to render and the gigantic download with lengthy load times should tell you us much. Sadly, the Unreal Engine’s maybe struggling under the weight of it. There’s a great sense of scale but you see the game struggling to adequately deal with the road ahead of you. This game has some awful lens flare effects and your vehicle’s livery has a tell-tale pop-in as you load in a stage.

On the plus side, some of the weather effects hold up to scrutiny. Rain is great and it pools to the point where distinguishing one road from another is tricky. The Bolivian section of the rally ends in some incredible thunderstorms with some lovely lightning. Dusk in Argentina looks brilliantly red and surreal. 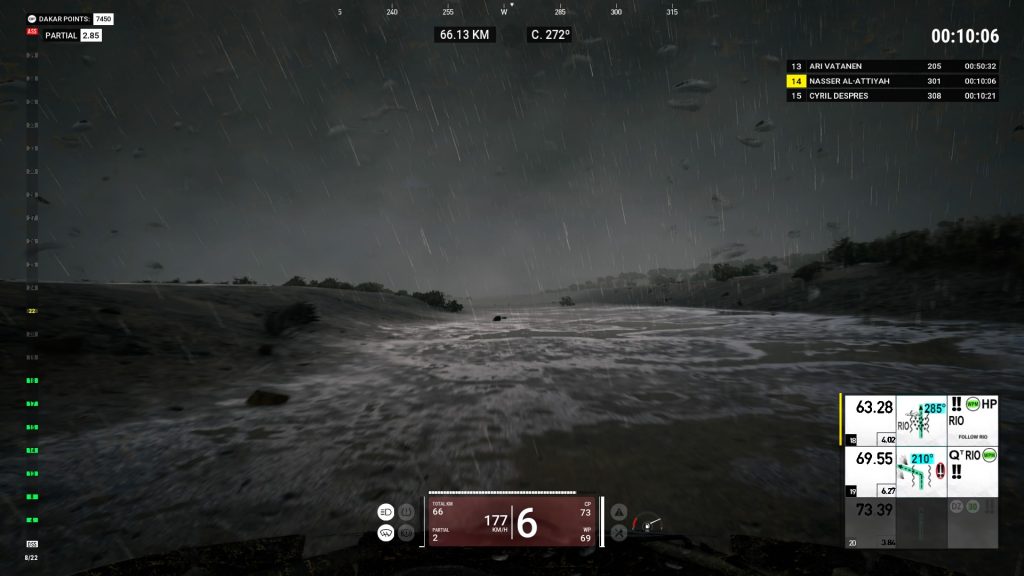 As ambitious as recreating so much wilderness is, Bigmoon can’t quite manage it. Even so, it’s an approximation with the authenticity coming from other areas. Kilometers are rushed to at least make the lengthier stages feel manageable. The cars and trucks hold a weighty feel and the rugged landscape always holds the potential to damage your titan. Repairs can be done on the fly at the cost of time penalties but there’s a definite sense you really have to consider your route and approach. You also have the option to assist others with your rear winch. Dakar 18 implies there’s a potential benefit but, given that the AI won’t return the favour, I’m not so sure.

Bigmoon’s promotion of Dakar 18 focused heavily on the navigation system. They’ve taken great care to borrow some authentic notes from the real rally raid and have managed to present it in a relatively understandable way. You have a distance marker, a landmark and a CAP which is effectively the point on a compass to point your vehicle in. Following it on paper can be tricky but, if you’re lucky to drive a car or truck, you have a shouty co-driver who is perhaps better at relaying all that information to you. 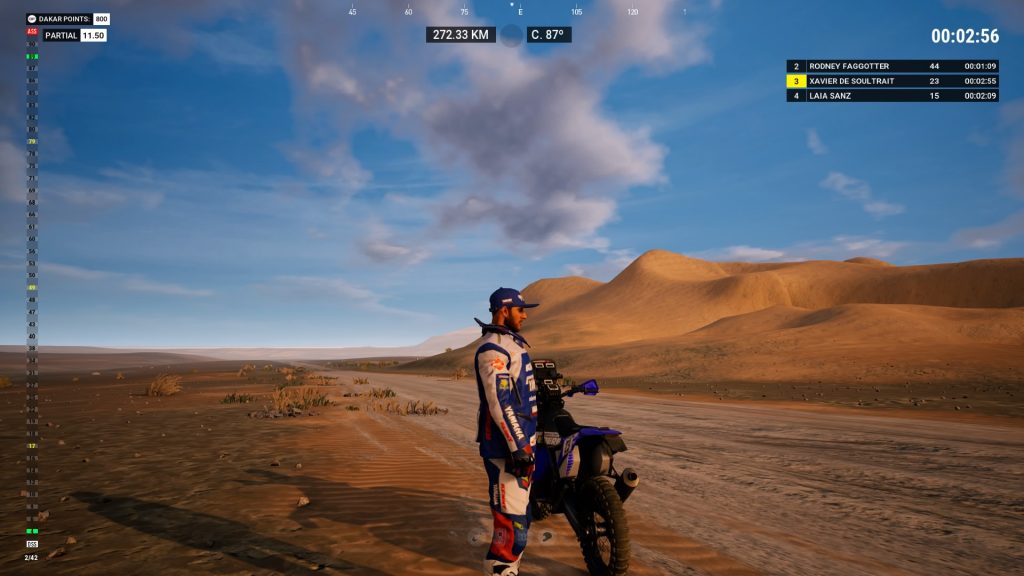 At least he would, if he was reliable. He has a very rigid set of notes which he sticks to, even if you happen to diverge from the critical path. Being set in an open-world, you can tackle waypoints from any angle. If you happen to get lost, your co-driver will continue his notes before suggesting that you might want to backtrack. Resetting to your last waypoint costs you 15 minutes in time and, in a fair few cases, that is more favourable than returning to a position of familiarity. Especially when your co-driver might not indicate you’re back where you need to be.

He is the largest point of failure with the navigational system and completely ruins Dakar 18. The technical issues with physics, visuals and sound you can always put down to budget but Bigmoon’s intent to create a game that doesn’t hold your hand, has backfired hugely. Even so, they’ve tried to give you plenty of feedback with the notes, compass and waypoint markers. When a co-driver goes silent, you just have to trust he’s going to pipe up with encouragement. When dealing with waypoints tens of kilometres apart, he’ll stay quiet for vital seconds or a full minute where you simply have no idea if you’re on track. It’s frustrating and very costly if you’re chasing position. 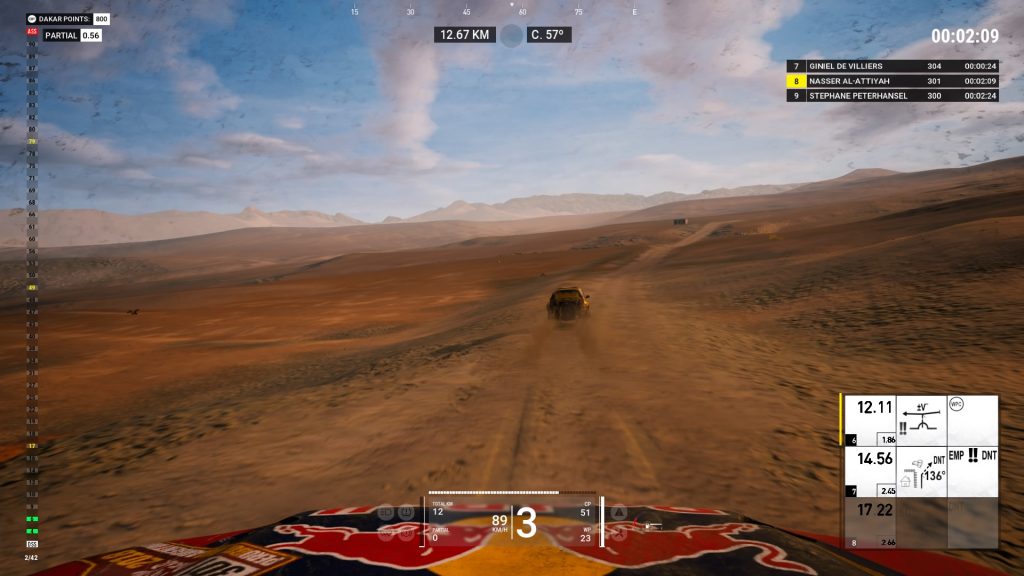 So what else goes wrong? I’ve seen entire vehicles and landscapes take seconds to come into existence. I’ve had my engine sound just vanish for a stage. Vehicle damage is inconsistent. Mostly, your vehicles are robust and take plenty of thumps before having to deal with running repairs. I’ve also seen me immediately withdrawn because hitting a roadside tyre was apparently enough force to destroy my truck.

Dakar 18‘s ambition can be admired but, when it comes to execution, there’s only a very slim selection of moments where it seems to come together. When you’re able to obey your co-driver and belt through some South American rugged terrain, it works. There’s an idea there being translated to code which, whilst rough and unpolished, is enjoyable. Unfortunately, it’s an open-world game that wants you to play it on its own terms. As soon as the player wants to go their own way or miss a mark, it collapses.

Dakar 18
5 Overall
Pros
+ There's a lot of ambition on display.
+ Some great weather and time of day effects.
+ Hurtling through vegetation to get to your next waypoint is fun.
Cons
- Visually knackered.
- Inconsistent damage model.
- Handling model feels too stiff.
- A very unreliable co-driver who doesn't react quickly to your errors.
Summary
Dakar 18's execution is terrible. The considered navigation system finds itself undermined by a co-driver I have no faith in. Handling is stiff and the world around you is struggling to keep itself in focus. There are moments of fun to be had when you barrel through dunes and palm trees but they remain moments. It operates on a very thin line and, all too often, that line breaks.