Let’s Build A Zoo is a zoo management title by Singapore-based software specialists, Springloaded.  The game launched on PC, to good reviews, back in 2021.  The thing is, this genre works great on a PC with its mouse and keys set up but how does it fare on consoles?  And specifically on our PS5?

Before we get into the answer to that, what is Let’s Build A Zoo.  Well, this game starts you off with a scrap of land and presumably some sort of license to open a zoo.  A brief tutorial explains the basics by teaching you to build your main office block, an enclosure for your first animals and the supporting buildings you need while also teaching you how to get the animals and staff you need to open the zoo up and start selling tickets.  The tutorial is brief for sure and only explains a small portion of the systems that the game employs but it gets you started. 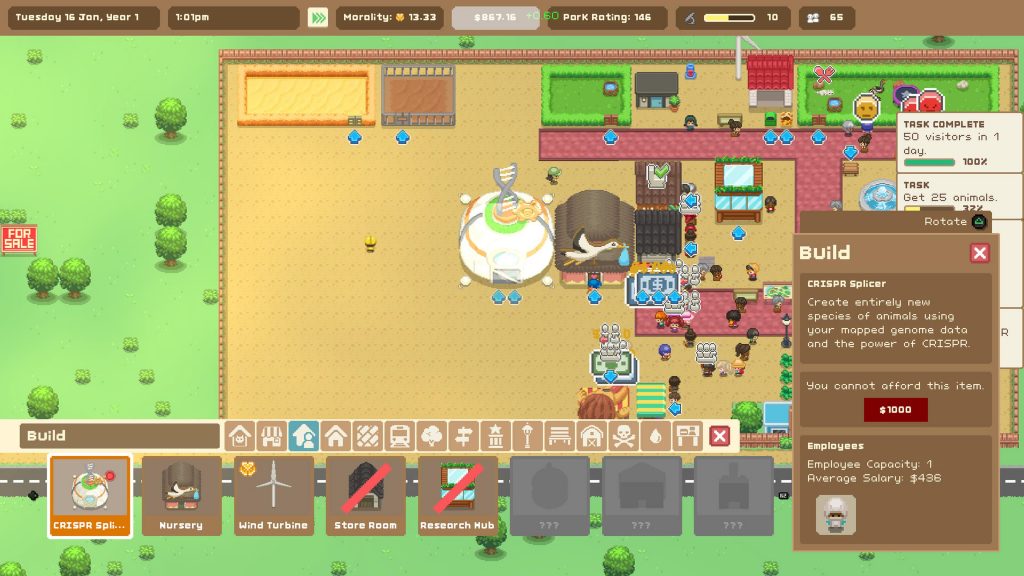 After that you’re on your own though and for a while there’s a lot to learn and it’s not clear how you should proceed.  The thing is that you can’t massively go wrong so it’s not really about success and failure but rather the sort of improvement-based progression that will appeal to the OCD in us that wants us to create not just a great zoo but also an efficient and optimised one.

The focus of the game is split between two key elements of running the zoo:  the animals themselves and the infrastructure of the zoo itself.  In terms of the animals, the game has a strong focus on conservation and ecology.  You can’t just order the animals you want off of a menu, instead you either have to wait for the ones you want to show up in the rescue centre, which refreshes daily, or trade with other zoos. 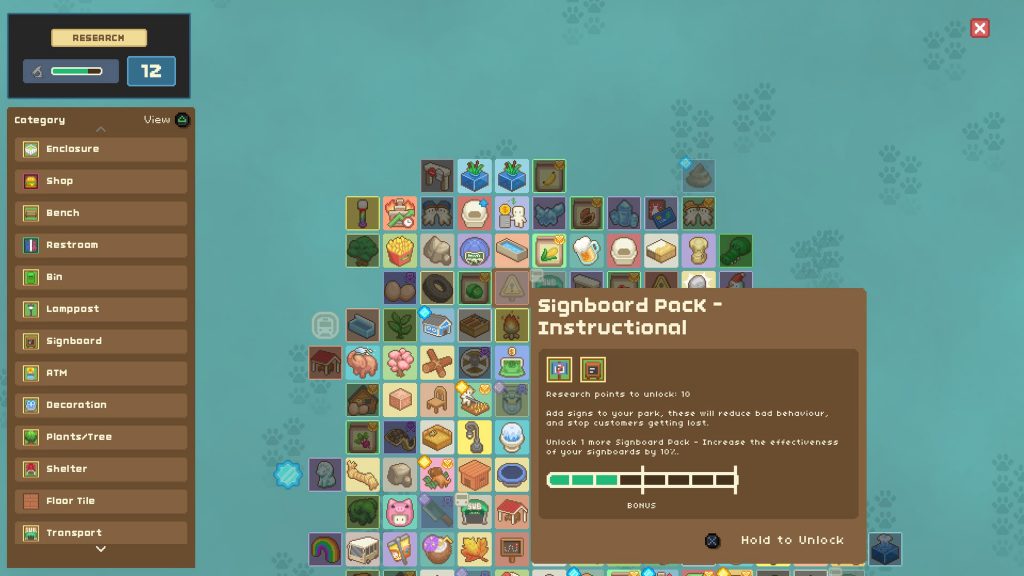 Now, these zoos don’t care about the basic geese, ducks and snakes that you’ll initially start with.  They want the cool variants that you can only get through breeding the animals and hoping for new species to evolve from them.  Each animal from chickens to lions has ten variants and to get them you can either hope for the right variants to breed and maybe create what you want or you can give them a hand by moving them out of the public enclosures and into your breeding centre.  Essentially, this game is really about creating one of everything.  At least that’s as close to an end goal as you’ll get.

So, if you’re trying to get those rarer variants you’ll need lots of breeding stock and that means lots of feeding and looking after.  If an enclosure gets overrun, you end up with animals dying of thirst, lots of corpses (that’ll really upset your visitors) and animals that really don’t want to breed.  Managing each species’ numbers and having enough staff to cover everywhere is an ongoing, evolving process indeed.

The thing is, you’ll make mistakes.  We had a nightmare when our snake and duck enclosures began to look like a battle scene from Game of Thrones.  Our incinerator (which is staffed by an undertaker) was up and running but the corpses weren’t clearing fast enough.  It turns out that the undertaker was a lazy bastard and so we fired him and got a new one with more of a work ethic.  This is a thing in Let’s Build A Zoo, you need good people and lots of them. 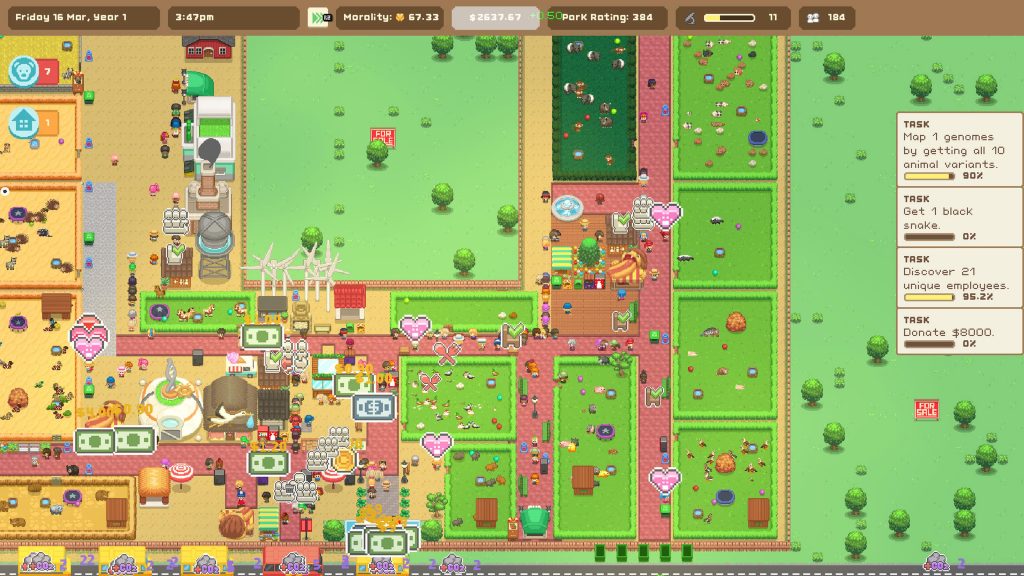 To get anything in this game, you need money.  That comes from the pockets of your visitors but again this needs to be managed.  They need to get there first and that involves having buses laid on to bring them to the zoo.  Then they have to get in but your ticket prices may put them off, so that’s another balancing act.  Once in the zoo they need to get around, so you’ll need decent flooring and subway systems for them.  They’ll also need to be relieved of all their money through various shops, cafes and vending machines.

However, they’re not just mindless wallets on legs.  Visitors need toilets, bins (if you don’t want litter everywhere) and they want to see that the animals are cared for.  Also, if you want them to stay, the zoo needs decorations and, for late evening opening, decent lighting.  All of this uses electricity and there’s a need to be ecologically responsible, so you might want to build wind-based electricity generators and pump your own water. 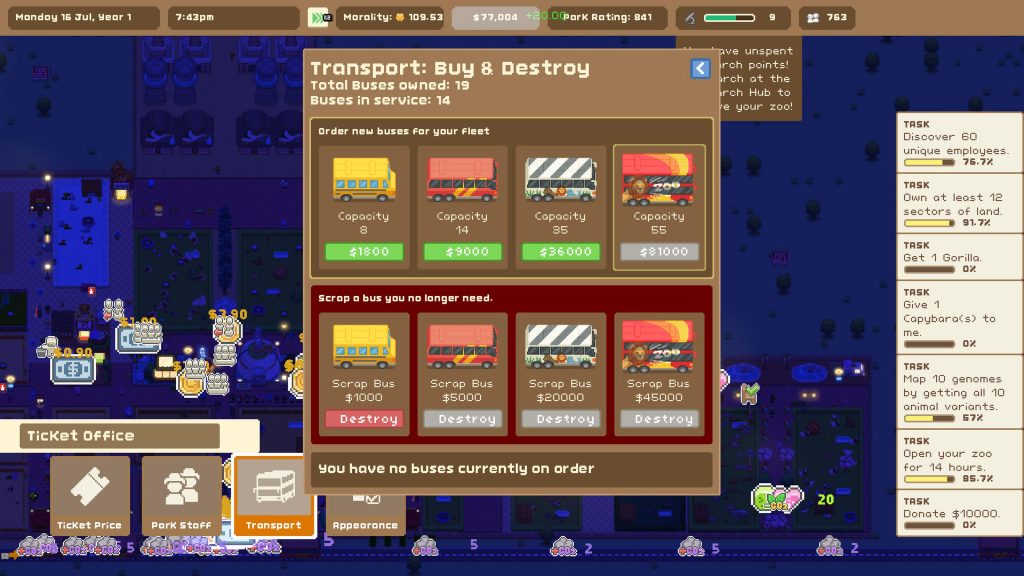 Along the way, various interactions will happen.  It might be that an animal rights campaign group want $50,000 for a tank.  Yes, an actual tank.  Or local mobsters might want leave a body in your pig enclosure.  Maybe a company will ask you to invest in them.  The game is full of moral choices and these help unlock new facilities later on.  You can pollute your way to a quick profit or you can use sustainable farming practises to do things the right way.  That’s up to you but be warned that once you’ve gone in one direction, you are rather locked in.

So, that probably sounds like A LOT.  Well, that’s not even all of it but the good news is that you figure out things as you go along.  It’s not immediately intuitive by any means but after a while you’ll be multitasking like an absolute pro, in ways that’ll surprise you.  Thankfully, you can stop time as well as speed it up, so there’s no pressure in that respect.  But yeah, it all clicks and when it does the game becomes outrageously addictive.  We mean ‘lose entire days to it’ addictive. 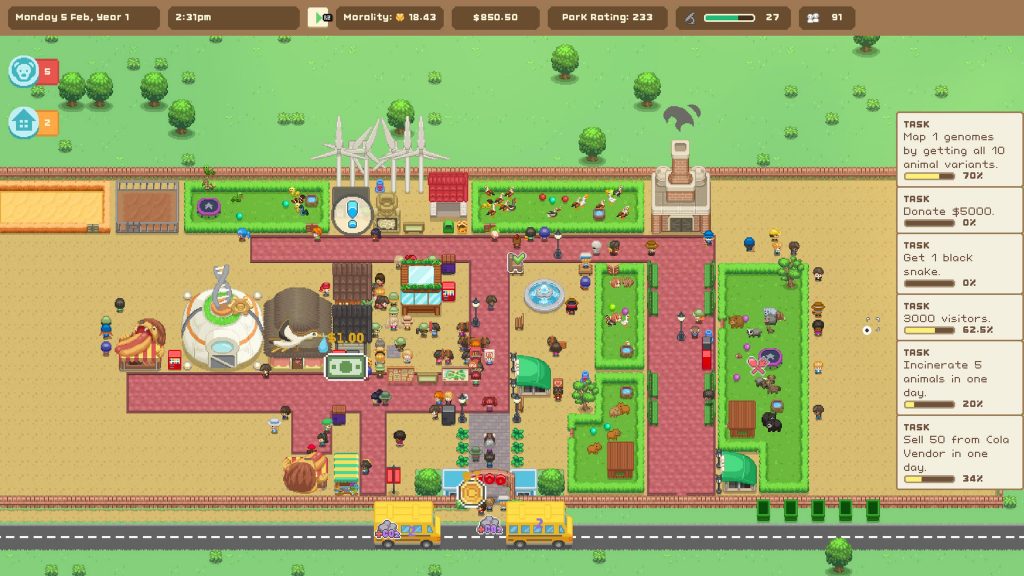 At first we were trying to get established and then it became about being efficient.  Some ten hours in, we wanted the PSC Zoo to be symmetrical.  But then we wanted the enclosures to be bigger and grouped by type (you’ve got grass, concrete, desert, tropical, ice and so on for different types of animal) and so the entire layout started to change.  We invested heavily in transport, upping our visitor numbers but also our CO2 usage.  So then it was about researching bigger and better buses.  And so on.  The game lets you edit, move and redraw enclosures easily, so toying around with your layout becomes a constant thing.

Visually, the game uses a 16-bit visual style and while we’re usually not huge fans of this, it’s the best way to convey all the visual info you need.  We still maintain that the original Civilization is the best one because the 2D pixel visuals make everything clearer and that’s the case here.  There’s an absolute torrent of visual information to deal with and so doing this in isometric 3D or full 3D wouldn’t have worked.  And yeah, the music is a little annoying but this is more of a ‘put on a podcast’ kind of game anyway. 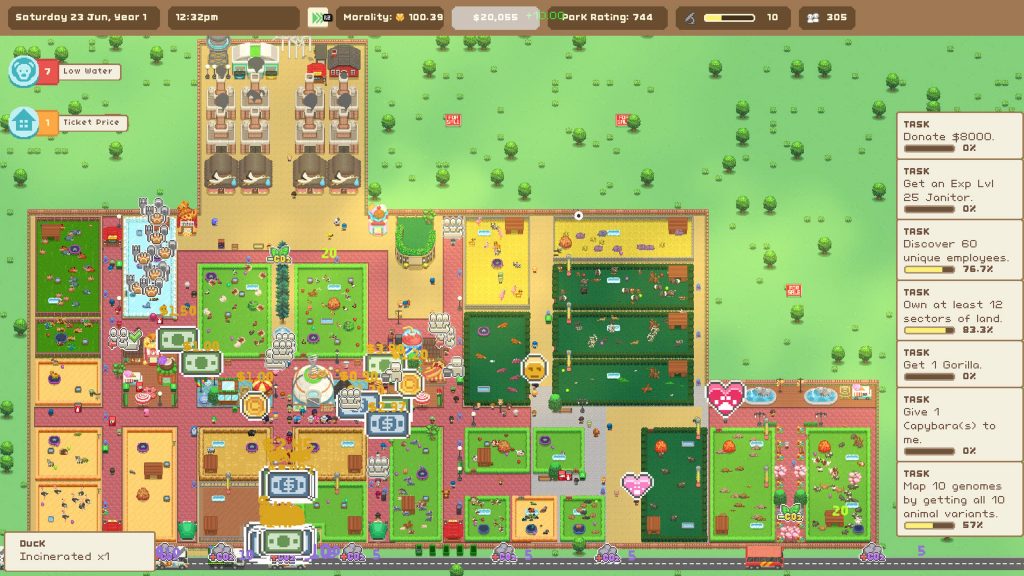 In terms of niggles, we’ve not got many.  The main one initially is that the game uses Windows-style er… windows with the X in the corner.  However, you don’t press X to close them.  You press the circle button.  This is surprisingly irritating early on but you do get used to it.  And there is a recurring thing where our cursor kept disappearing.  We’re not sure what causes it or how we kept fixing it but it’s an annoyance.

The biggest issue for us is with the gene-splicing mechanic though.  Any two animal types can be combined into hybrids.  They’re popular with visitors but can’t be bred and so don’t really add much to your long-term expansion plans.  We used the gene-splicing facilities instead to clone rarer animals for breeding which is way more important and, also, not entirely at odds with the game’s conservation-based theme.

This wasn’t a game that any of the review team were looking to play.  It was a game that arrived with very little fanfare and apart from our buddies at the sensational Games Asylum, we haven’t seen much online chatter about it.  But Let’s Build A Zoo is phenomenal.  It’s deep, complex and fully-featured but also gentle, intuitive (after a while) and flexible.  It even includes the dinosaur park themed DLC too, so basically this game could last you months and what else are you going to do?  ‘Live life to the max’ or play the most fun management game on PSN?

Review 0
9 Overall
Pros
+ Unbelievably addictive
+ Genuinely great fun to play
+ Very flexible approach to building, and changing, your zoo
+ Loads of upgrades to get
+ Visual style works well
Cons
- A couple of design and technical niggles
- Onboarding is a little tricky initially
- Gene splicing element doesn't really fit in or add much
Summary
Let's Build A Zoo might look like some 16-bit indie nonsense but it's easily the best management game we've played in years. It's playable, fun and outrageously addictive and it could honestly keep you happy for the rest of the year easily.

One thought on “Let’s Build A Zoo – PS5 Review”