Cuphead has been out on various formats for many, many years now but it’s finally arrived on PS4. Everyone who is interested will know about the visuals and difficulty, but was it worth the wait? 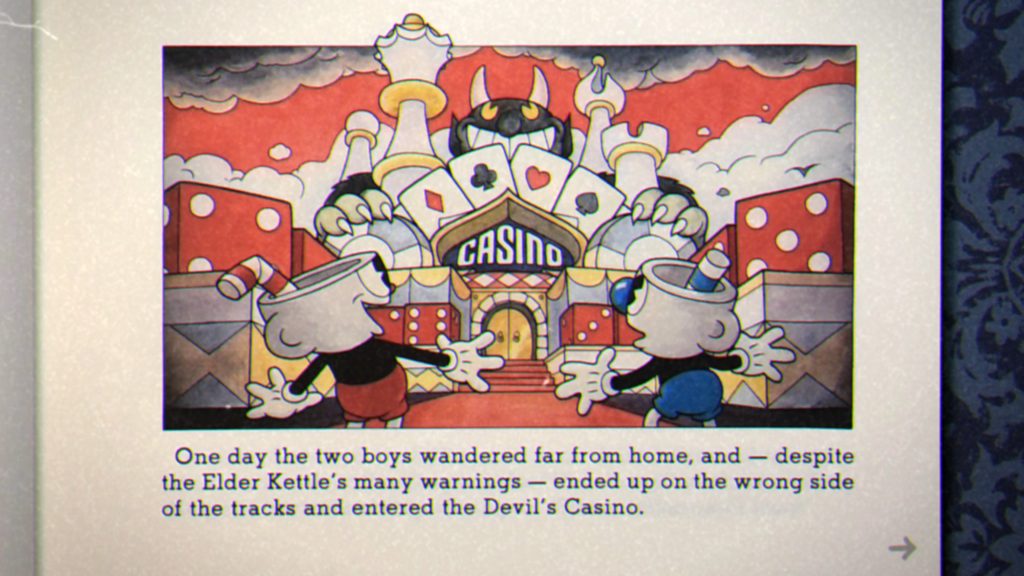 You play as Cuphead or his brother Mugman, or both in local two player, after they’ve gambled with the Devil and lost. They make a deal. Rather than give up their own souls they’ll collect the souls of others to deliver to the Devil instead. To do so they have to travel the land of Inkwell Isle and take on many bosses with the odd platforming level sprinkled in.

You read that right. Most of the levels in Cuphead are simply boss fights. There are no obstacles or lesser enemies to fight before reaching the main event, you explore the world map, pick a level and then the boss is there in front of you ready to destroy you. Here you’ll use your abilities to shoot, parry, dash and jump to avoid enemy fire, obstacles, moving platforms or whatever else the boss throws at you and put as much damage out as you need to win.

There are six ‘run-and-gun’ levels as well, which are more traditional in that you run from left to right shooting enemies and jumping across platforms. There are no boss fights in these levels, you just have to get to the end but they do hold coins which you can use to buy new weapon types and charms at the shop which grant enhancements like an extra hit point or invincibility on your dash. 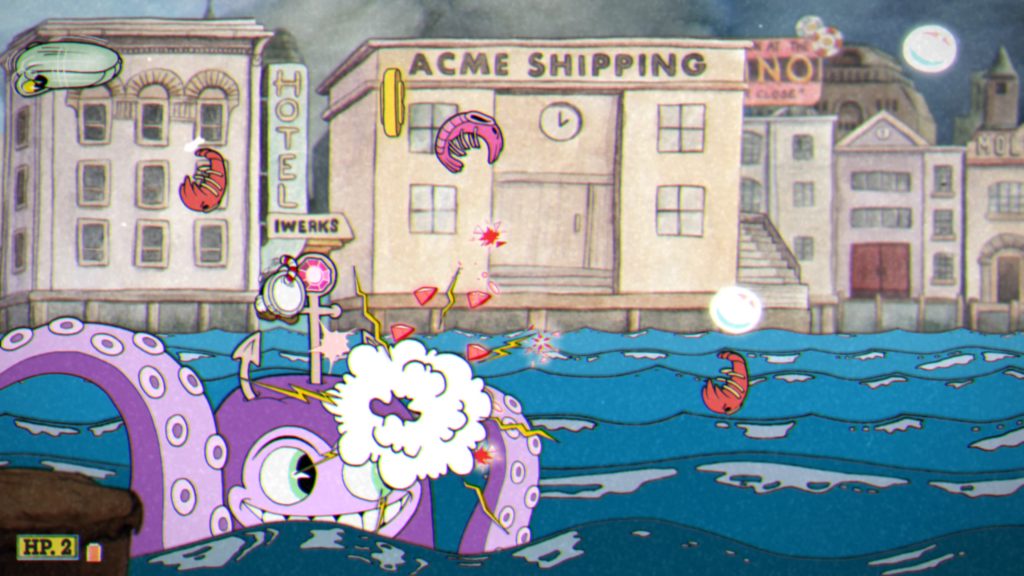 You may want to take that extra hit point as Cuphead is punishing. Fans of the genre, games like Contra or Bleed, will be used to it but Cuphead arguably knocks it up a notch again. As levels are only bosses they can be completed in a couple of minutes, but you’re often tasked with playing near enough perfectly for those two minutes. By default you have three hits you can take before you die which sends you back to the start of the stage again.

Boss fights are split into sections. They’ll have there attack patterns which will start out simple enough at first, but after you’ve done enough damage they’ll move onto another form with different attacks and then another and maybe another. You won’t know their attacks or their progression until you experience them yourself, obviously, so although I managed to beat the first boss on my first go with a decent rating it wasn’t long before each boss took multiple goes and then part way through the second area I’d died on a single boss more than I’d died on the whole game up to that point. 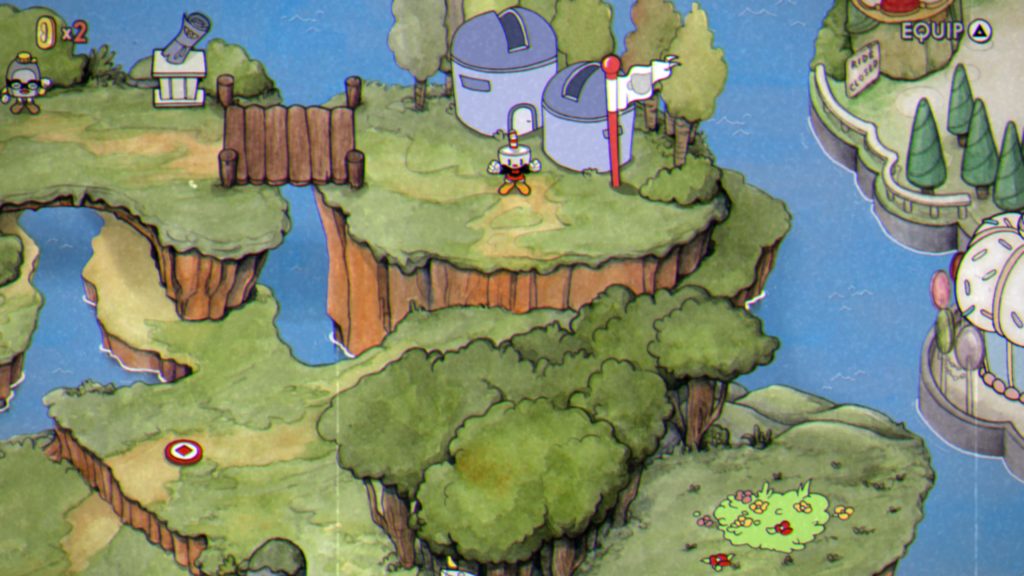 Things get very tough as bosses don’t just use one move, stop and then move onto a different attack as is the norm. These bosses are very happy to fire two or three different attacks at you at the same time, or at least overlap attacks, meaning you’re paying attention to everywhere on screen, hopefully, on top of trying to do damage yourself. It’s this juggling of enemy attacks that creates the difficulty as the controls are responsive and the bullet hell generally doesn’t get too crazy on an individual basis.

As the levels are so short once you’ve failed a boss a few (dozen) times the difference between another failed run and perfect run without getting hit is actually quite small. You won’t bet scraping through on luck here, you’ll need to know what you’re doing and execute well in order to collect that soul contract. The run-and-gun levels are a little more forgiving, with enemy spawns being your main hindrance but the harder sections, in a similar manner to the bosses, will have you juggling some platforming along with enemy shots coming from multiple angles.

As the gameplay is so similar throughout it’s the boss variety and visual design that keeps things from getting repetitive. Effectively you’re just dodging and shooting in every single one, but at times you’ll be jumping between moving platforms whilst doing so or flying a plane which means you no longer have to jump around with full range of movement but the boss’ attacks become a little more bullet hell-like. 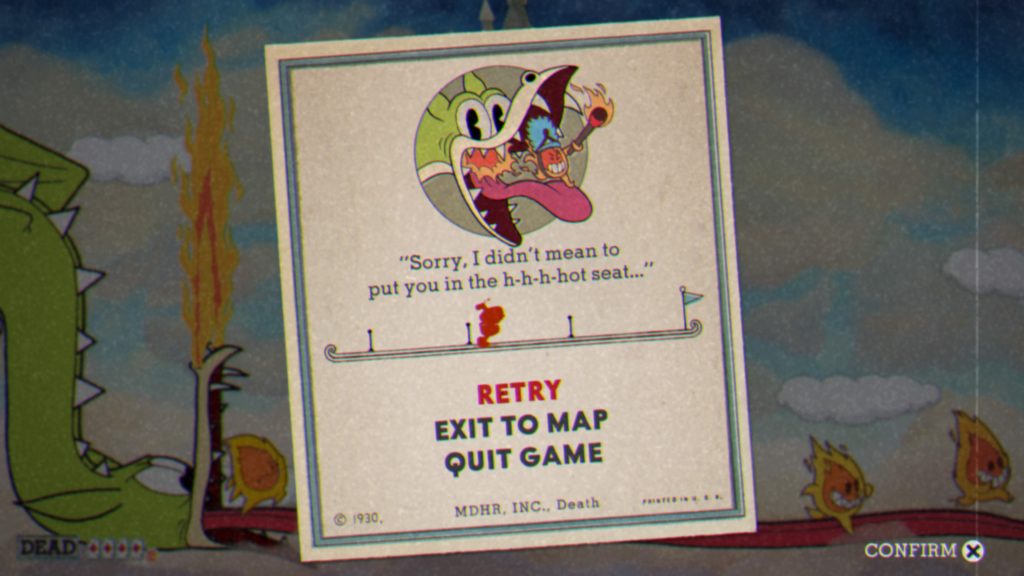 Which brings us onto the visuals which are obviously the most striking thing about Cuphead. Based on 1930s style 2D animation techniques, the visuals are instantly recognisable, charming and full of life. Each boss is very different in appearance and due to the style can change form in an instant whilst still retaining the same personality and having a narrative progression. The backgrounds are just as lovingly created and the whole thing blends incredibly well to make something that is just as entertaining to watch as it is to play. Similarly the music is also top notch and fits the aesthetic perfectly.

It can lead to some problems however. As everything is so lovingly animated everything on screen is constantly moving which makes for a busy environment. Part of the learning process for each boss is to zero in on the elements that are a threat and zoning out the window dressing. Clear bullets are a key design element with this type of game and Cuphead doesn’t always succeed in this department. Similarly there are times when the lovely foreground art will obscure an attack which is very frustrating when it costs you. 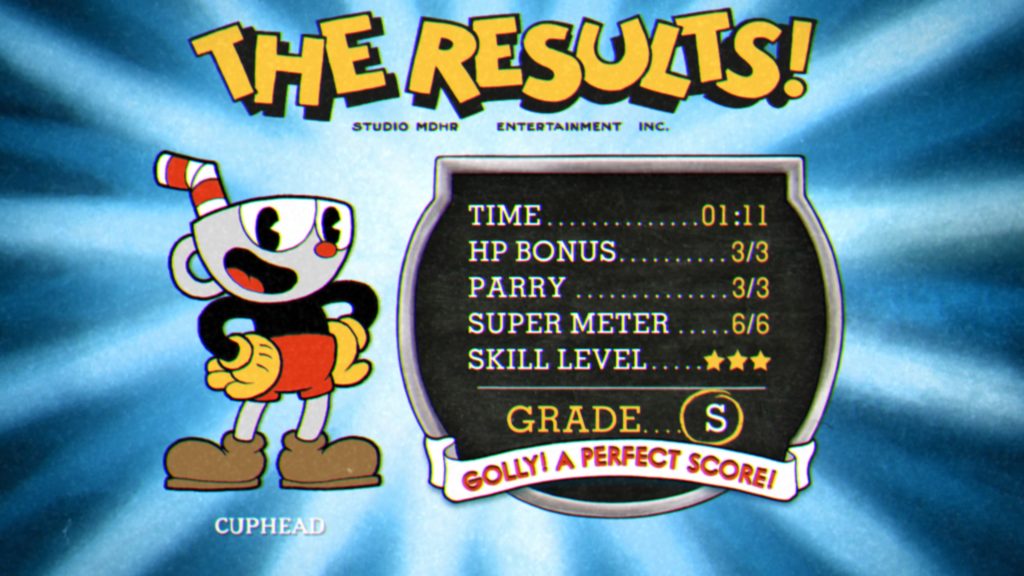 Frustrating is a valid word to describe Cuphead. It’s frustrating up to the point where you succeed, at which point it becomes rewarding. If that sounds like your idea of hell then no matter how attractive the game is Cuphead just won’t be for you. Fans of this type of game will be familiar with that feeling however and shouldn’t be scared off by it. I’ve had a blast playing through it on normal and have now unlocked Expert difficulty which I’m working my way through whilst trying for higher ratings.

If you’ve waited this long for Cuphead to appear on the PS4 then you won’t be disappointed. Better late than never as they say. Just remember that nothing worth doing is ever easy and Cuphead is worth doing.

Cuphead
8 Overall
Pros
+ Fantastically executed aesthetic
+ Offers plenty of challenge
+ Rewarding once you actually win
Cons
- Busy screen can make it difficult to see hazards
- Frustrates until you succeed
Summary
Cuphead finally arrives on the PS4 and it's been worth the wait. It's difficult and can be frustrating but for those with a love for boss fights and a tenacious approach to challenges this will provide a steep one. Everyone else can just watch the lovingly animated visuals.