West of Dead is a Wild West meets purgatory twin-stick shooter roguelike.  Now while the last part of that sentence isn’t anything new on PSN (there are a lot of twin-stick roguelikes on the system), the setting is the first of a series of unique qualities that the game has and while the team behind it, Upstream Arcade, is a pretty small outfit, the game comes with a confidence that belies its indie roots.

You play as a very dead cowboy type called William Mason who has found himself trapped in Purgatory with no idea what he’s meant to do.  Luckily the environment sees fit to bless him with a couple of guns and a whole heap of miscreants to shoot.  A short tutorial explains the controls but there’s only really movement, aiming, shooting and dodging to worry about and the set up is pretty intuitive.  We prefer games where aiming the right stick also fires but West of Dead requires you to hit the triggers (one for each gun) and that works here as this is a slower, more tactical kind of a shooter.

Each of the game’s levels is a randomly-generated mix of corridors and rooms.  The settings change from mines, caverns, towns and so on but they all feel the same to play in that you generally enter a room, get behind cover that you auto-snap to and pick off your targets before they do the same to you.   You do need to pick your shots and be aware of timing though.  Shooting your attackers when they are reloading and ducking when they aren’t tends to be the way forward and getting away from that will surely get you killed. 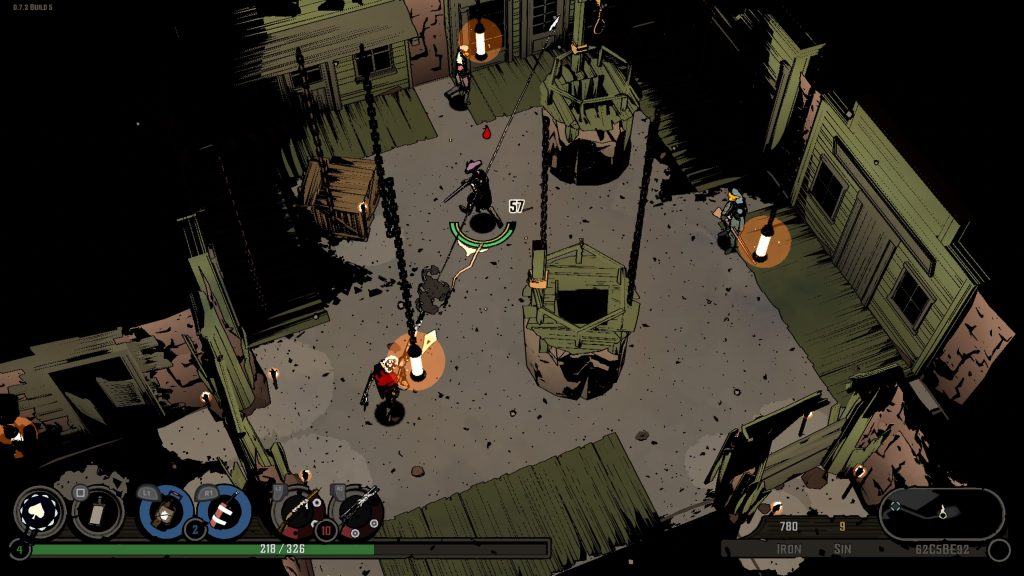 There is a selection of guns and you randomly start with two.  This could be any combination of pistols, shotguns and rifles with each offering compromises between range, firing rate, power and ammo capacity as you’d expect.  I tended to prefer quick shooting pistols over rifles but you can work with whatever you are given and it won’t be long before you find something better, even that just means finding the next level up of your current firearm or obtaining something new.

As with all roguelikes, you’ll want to explore every part of a level so that you’ve found all the best weapons and skill point upgrade stations.  These allow you to improve your hitpoints, damage or ability cooldowns and you don’t really want to be exiting the level before you’ve found them all.  The levels however can be a little annoying with plenty of branching paths leading to more branching paths.  It all feels fairly random and sprawling when all you want to do is be methodical and you won’t be rewarded with anything interesting to see from all that exploring, just more rooms and corridors. 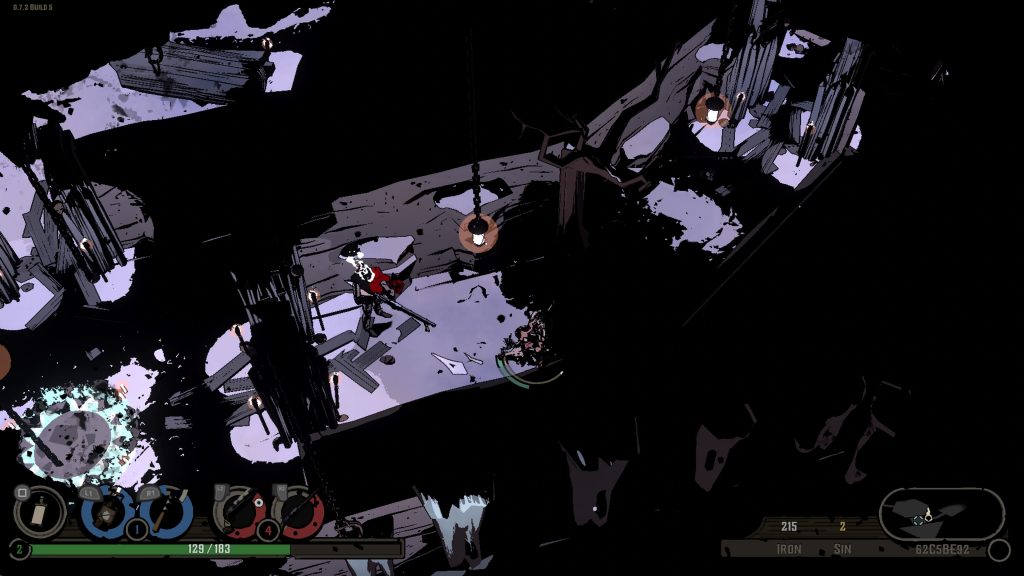 The slow, methodical combat of the game actually makes it feel almost like a turn-based strategy game at times or a bit like Dead Cells.  You can’t afford to be caught out in the open reloading your gun, so you need to be aware of how many shots you have left, where you are and what the enemy is doing.  This gives the game a unique feel and one that we approve of but it does have one downfall.  West of Dead isn’t afraid to drop a big difficulty spike on you and getting killed in this game is pretty annoying when you’ve made that cautious progress for several levels.  It doesn’t matter how well equipped and prepared we were, sometimes death just feels inevitable.

There is a series of persistent upgrades that are unlocked as you go along and these are frankly a little disappointing.  Uninspiring guns to add to a list of already uninspiring guns.  There’s no interesting abilities or game-changing weapons to get excited about.   We love roguelikes with good upgrade systems but this felt a little flat to us but we did like the Dead Cells style mechanic of being able to put sins (one of this game’s forms of currency) towards upgrades even if you can’t afford the whole thing. 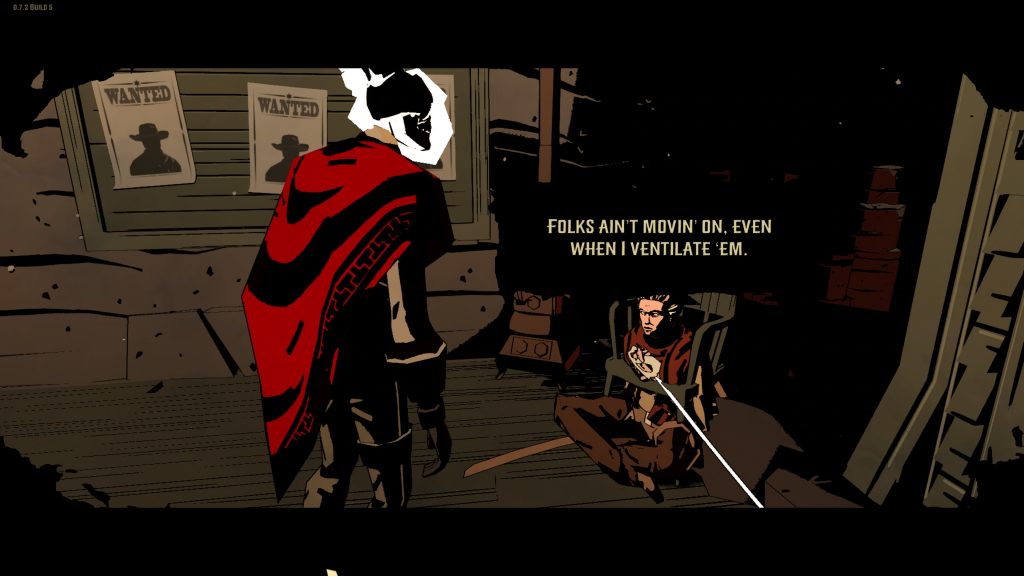 More worrying is the state of this game’s code.  Now I originally wrote this review yesterday but the game literally stopped working.  Starting a new game simply wouldn’t work.  This put the game in danger of getting a very low score but I held on (despite having no replies from the devs) and there was a patch today which fixed that issue.   However, I’m still getting problems.

There are sure-fire signs that the PS4 wasn’t the lead platform for a start.  From the message about the game’s beta test period on the PC to a weird issue where a cursor would show up pre-patch.   Since the patch dropped I’ve had two new issues.  At one point one of my guns stopped firing.  So I had to restart.  Then the game stopped saving.  So I had to restart.   And just now Mason went invisible, couldn’t move and the game’s volume doubled.  I’m done restarting.

There are other problems too that aren’t related to rushed porting.  The camera often does you no favours (especially given the dark setting), the NPCs are vague about what you are meant to be doing and the game likes to hint that you don’t have things you need but doesn’t tell you anything more than that.  The slow pace, the aforementioned level layouts (I won’t say designs) and weak upgrades all do their part to take the shine of what is otherwise a good game. 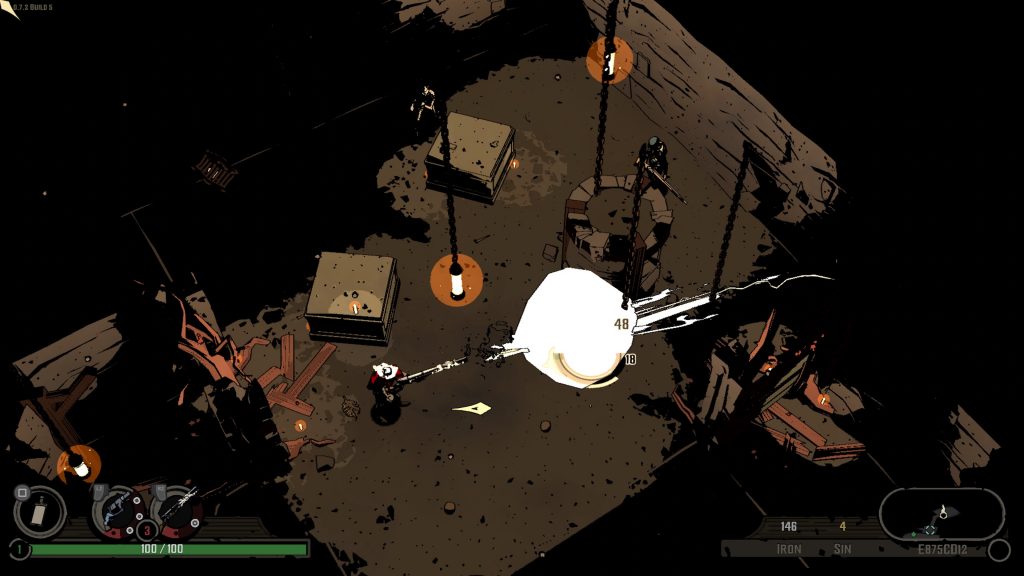 On the plus side, the game’s moody presentation is great.  The cell-shaded, dark visuals look great (even if they aren’t super conducive to effective gameplay) and the twangy, country soundtrack fits in perfectly.  It all reminds us a lot of Ghost Rider, or specifically the cowboy version that used to be the Ghost Rider before him, and that’s absolutely fine with us.  Plenty of plaudits have gone to Ron Perlman for his narration in the game but we actually felt he was phoning this one in, and we’re usually big fans.  But that said, it’s always nice to have some proper narration and so we’re happy it is there.

This exact game but with some better gameplay decisions could have been an 8 but it’s clearly a few tweaks and revisions away from that, even before you factor in the shoddy technical state the game is currently in.  Yesterday the game went from a 6 to a 0.  Now it’s back up to a 4.  The PC version seems to be getting regular updates though and so this could be one to keep an eye on, or indeed one to pick up when it hits the PSN sales which it’ll likely do in an improved state.

West of Dead
4 Overall
Pros
+ Classy presentation
+ Tactical gameplay
+ Fairly unique in this genre
+ Solid controls and mechanics
Cons
- A complete mess technically, you just can't rely on the game
- Visuals can be a bit hard to pick out
- Difficult spikes kill the fun
- Might be too slow for some
- Level layouts aren't great
Summary
West of Dead has a lot of charm, confidence and potential but is currently a bit too flawed to recommend. However, a few patches down the line this one might end up being your huckleberry.