The third and final chapter of The Banner Saga has been released, allowing those who have taken up the journey in the first two games to finish the story. If you haven’t then, although you can start with this third release and there is a recap on the menu, I can’t recommend starting anywhere other than at the beginning. Although released as three separate games in reality these are merely three parts to the same game. Luckily a collection of all three parts has just been released alongside this final chapter. 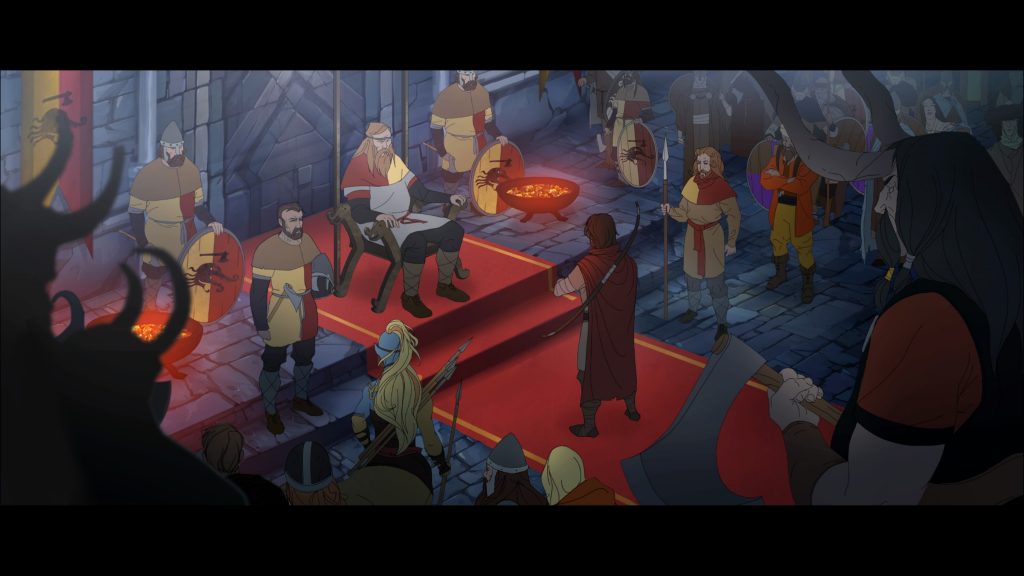 You can read my reviews of the previous two games here and here to see if they might be your cup of tea. If you’re a fan already then there’s no need to be hesitant, for better or worse The Banner Saga 3 is very much the same game.

I shall avoid spoilers but you’ll be continuing on from the conclusion of the second game as you’d expect. You’ll control a couple of different groups who have taken up separate journeys, though as with all things in The Banner Saga, each seems equally hopeless. Important decisions and conversational responses will decide who lives, who dies and how things will eventually turn out. Very much like the previous games, though as this is the final game everything is working towards a point making some decisions feel less impactful and the truly important decisions coming at the end. 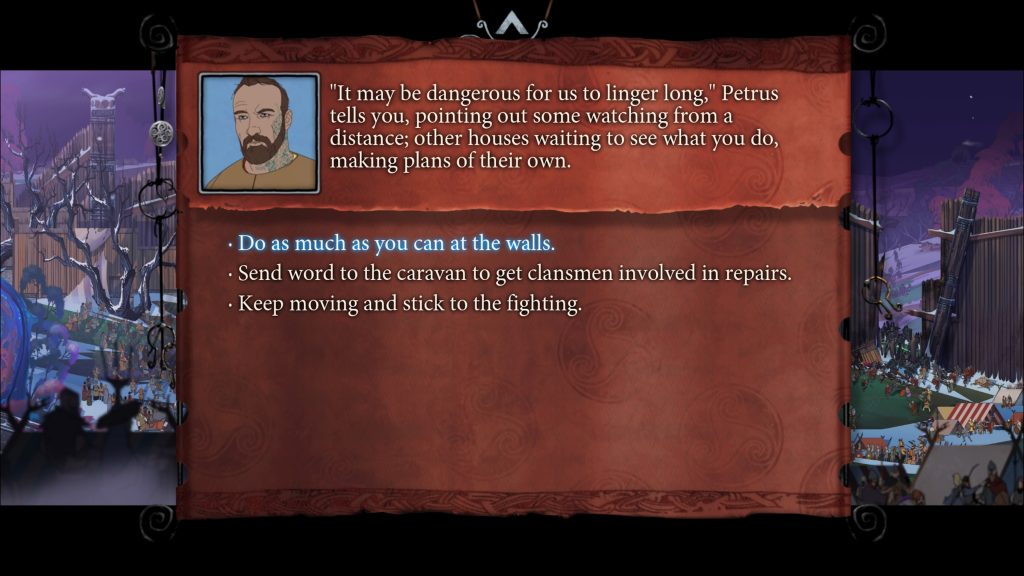 When you’re not watching your crew trek across the land or trying to keep everyone in check through words you’ll be fighting. Again this has changed little. Tactical battles take place on a grid and you and your enemies take it in turns to strike one another. The interesting thing The Banner Saga brings to the table is that everyone has Strength and Armour.

Strength dictates both your health and the amount of damage you do, so an injured foe can’t do as much damage to you. Armour protects the Strength stat so choosing whether to take smaller chunks out of the enemy to make them less effective or damaging their armour to inflict some major damage later is an important consideration. Up until one enemy remains you always take it in turns, going you/enemy/you/enemy, no matter how many characters are left so it also creates the odd scenario where wiping an enemy out isn’t always the best course of action. 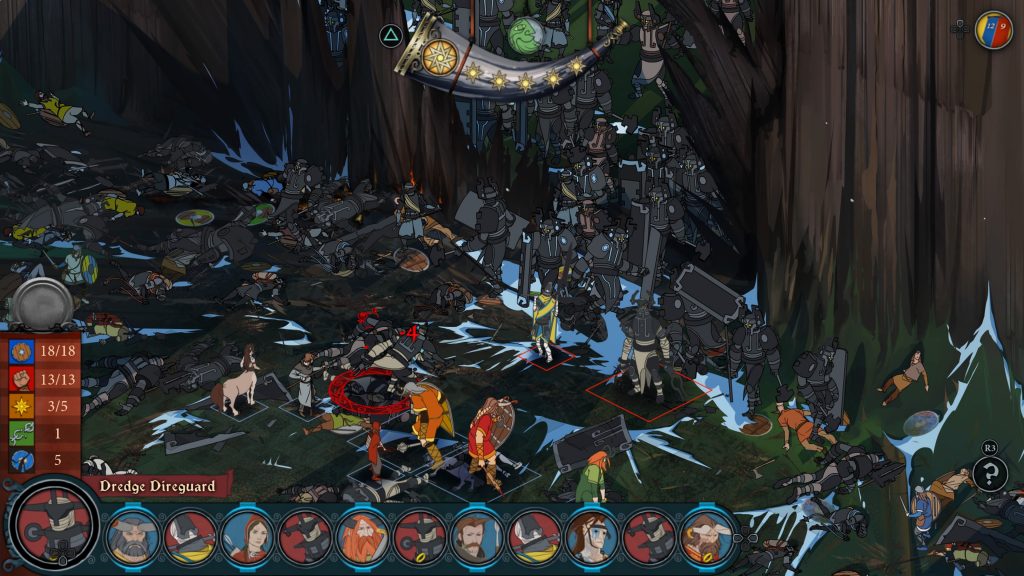 I stated in the review of the first game that the combat didn’t really evolve throughout the game so the fact that two games later it’s still the same is a little disappointing. I have to admit that as I was reading the story and making decisions that when a combat scenario initiated I would sigh a little as I don’t find it to be that much fun and the introduction of longer battles involving waves of enemies entering the battle makes it even more of a struggle. I guess it fits with the theme that these characters are fighting a war of attrition but as a fan of tactical gameplay I found these battles to be a bit of a slog.

The presentation is still top notch however. Great art including some brief but excellent animated sequences combined with the strong soundtrack and sparse but decent voice work help deliver the story and bring the variety of characters to life. This has been consistently fantastic throughout the series, I can’t find fault with the art at all. 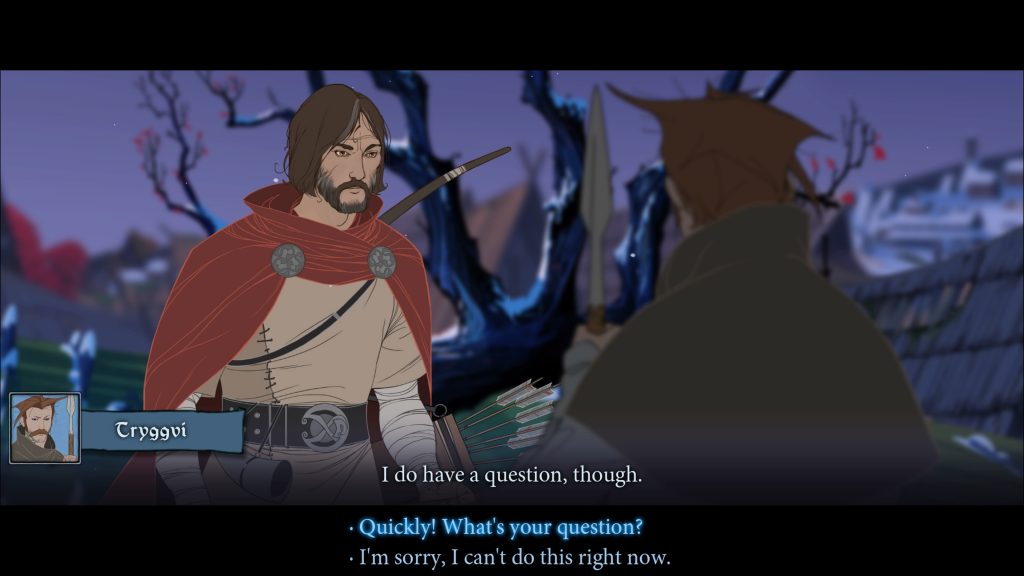 If you’ve not played any of The Banner Saga games before then I can’t recommend The Banner Saga 3 to you. Not because it’s bad, I’d put this on par with the other two games, but you have to start at the beginning to make this journey worthwhile. Fans will surely want to see out the end of the saga and will ‘enjoy’ it, as much as one can enjoy a tale of struggle. I’m just a little disappointed at the lack of evolution throughout the three titles.

The Banner Saga 3
7 Overall
Pros
+ Concludes the epic story
+ Beautiful artwork
+ Important decisions
Cons
- Combat is repetitive
- Still has some control issues
- Not evolved much at all
Summary
The Banner Saga 3 concludes the story whilst changing little gameplay-wise. Fans will tactically battle their way through to the ending but newcomers should go back to the beginning to experience the entire tale, rather than skipping to the end.