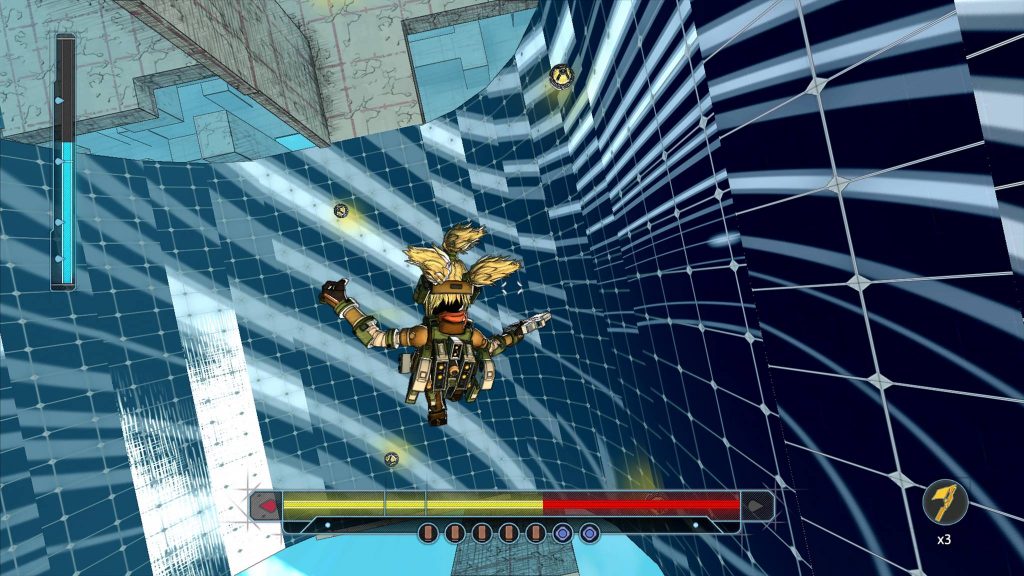 Cloudbuilt is one of those games that went almost completely unnoticed to all but a few when it first launched in 2014 on PC. Although it was fantastic to look at and equally so to play, for some reason it couldn’t penetrate the hearts and minds of the many, which to me was a shame. It was a game that mixed fast paced parkour and shooting action together in a way that would make its peers blush with jealousy and while being a relatively compact offering, it certainly deserved better than it received.

Super Cloudbuilt is a remaster of the original and aims to set things right. Not only by being the route to the console market, but also to refurbish its predecessor with additional challenges, levels and gameplay features that flesh out the proceedings into a more expansive package. 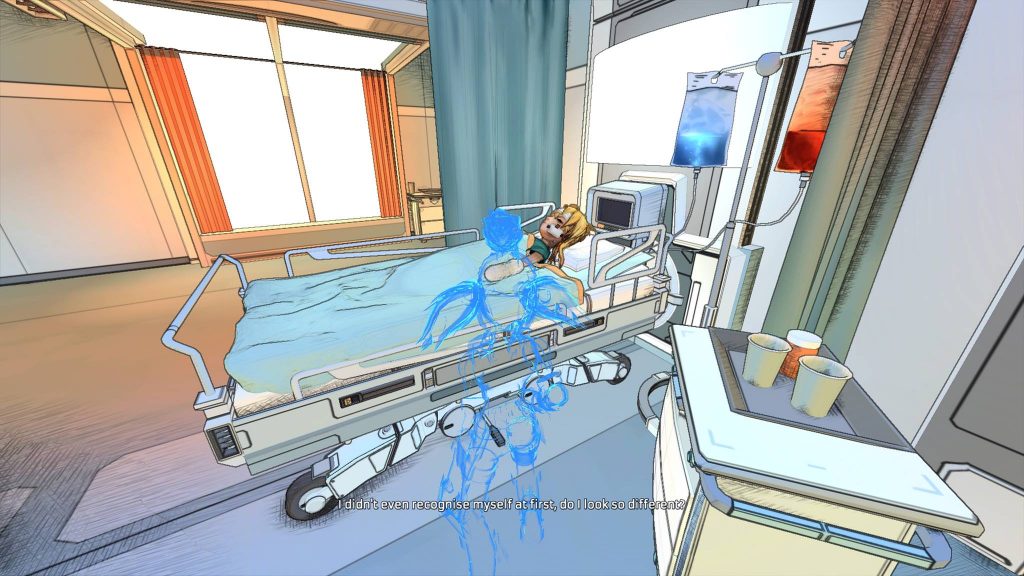 You play as Demi, a soldier that has been injured in a battle and is now bedridden within a recovery room. While this may make it difficult to achieve the parkour acrobatics, you instead control her mental projection who is able to explore and traverse the many abstract worlds that make up her dreamscape. The story is loose and boils down to Demi seeking the truth about the extent of her injuries and coming to terms with the dream world she now occupies.

Control wise, Super Cloudbuilt is incredibly tight and responsive. The face buttons on the DualShock are rarely used as jump, shoot and boost are mapped by default to the shoulder buttons and triggers. This leaves both thumbs available for full movement and aiming control, something that is vital for the speed at which you will be moving. At first you are granted only with the ability to run and jump, but soon into the first couple of worlds you are met with additions to your exosuit that give you an additional jump or boosts that are controlled by a recharging energy bar. 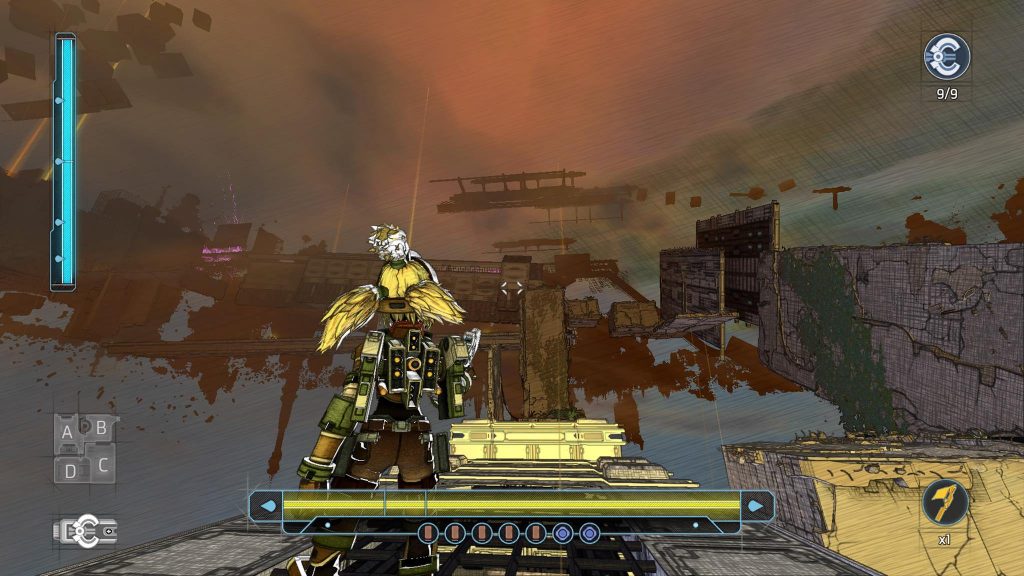 At first glance, each level is constructed of floating platforms and walls that Demi can use to get from A to B. however, each area has several pathways that can be used to achieve the end goal. This makes for free-form progression and keeps multiple playthroughs interesting. This is further exacerbated with collectable items that boost your weaponry and health,  there are also challenges to complete that unlock movable checkpoints and upgrades to your boost gauge, making your life easier in later levels.

In addition to the main story there is also a rush and a ranked time trial mode for you to sink your time into. These use the same levels as the story as you unlock them and focus mostly on speedy level completions. Ranked mode is exactly as you would expect, allowing you to compete with other players for leaderboard positions while Rush mode groups levels together and tasks you with other challenges along the way, such as collecting items on your path to the exit or to simply rush through all the levels in one go. These can be incredibly difficult, however if you are into the idea of speed running for glory then there are few finer examples available. 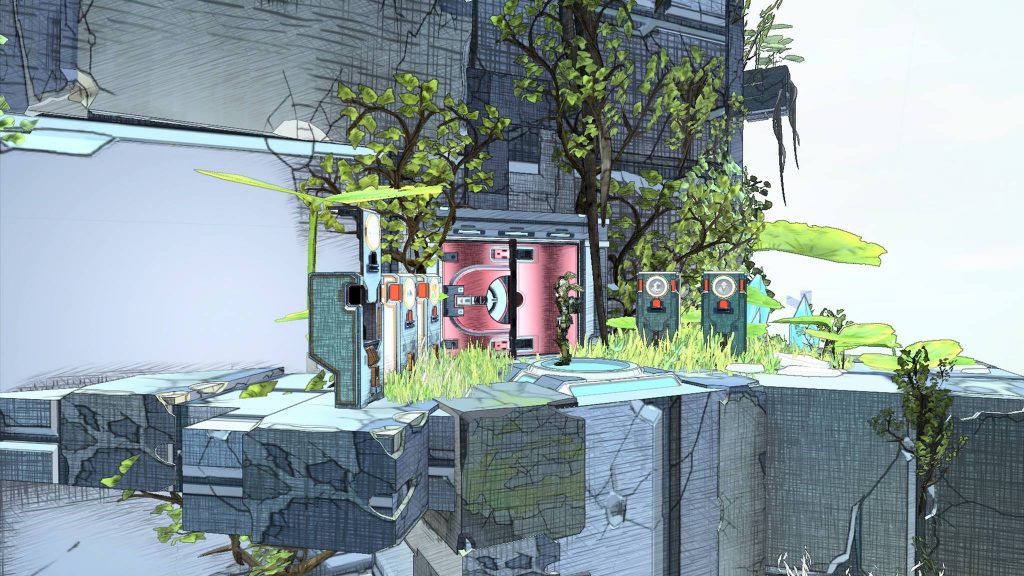 As for presentation, the screenshots do not do the game justice. In fact, to even capture these I had to make sure that Demi was stationary due to high speed blurriness. The dreamlike cel-shaded aesthetic is beautiful to behold and makes for a visually arresting look that is clear to read even while going at full pelt. This makes spotting robotic enemies along the sides of walls and platforms easy to do and allows you to mark your environments by sight so you can tell where you have been. The level design, while simplistic also manages to impress. Each world is themed and can range from overgrown foliage covered stone walls to dark and industrial monoliths that intimidate.

All in all, Super Cloudbuilt is a fantastic slice of impressive velocity and visual delight. This should absolutely be tried by anyone who likes their 3D platformers to play as gorgeous as they look. You should especially consider this if there is a certain blue hedgehog in your life that hasn’t been pulling his weight recently.

Super Cloudbuilt
9 Overall
Pros
+ Super responsive, an utter joy to play
+ Open pathways allow for multiple route choices and plenty of exploration
+ Very addictive
+ Beautiful visuals
Cons
- Steep difficulty curve, requires some control mastery
- That it took so long for Cloudbuilt to come to console
Summary
Super Cloudbuilt is a fantastic remaster of the unsung 2014 original. It not only brings the blistering pace and gorgeous visual aesthetic to the consoles for the first time, but ends up being reinvigorated with the addition of more challenges and levels to sink your teeth into. If you missed Cloudbuilt the first time round and love high speed platforming then you can do no wrong.