Released on PC last year to critical acclaim, Shadow Tactics: Blades of the Shogun has made its way to PS4. Being a slower paced, strategy-stealth game you might think it an odd choice for a console port but that just makes it all the more impressive that it totally works. 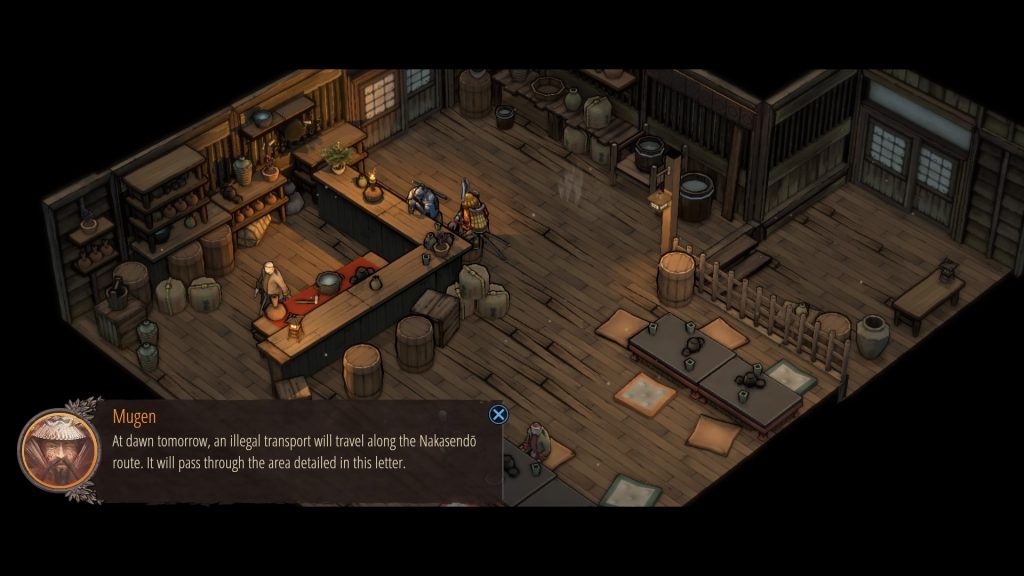 You control a rag-tag group working for the Shogun, protecting him, his people and killing his enemies. There are five characters and each has their own personality and skills to bring to the mission. There are cutscenes between each level and your characters chat throughout missions but the story itself is quite simple but works as a good excuse for a variety of missions.

In a mission you have an isometric view of the map and can pan, zoom and rotate the camera as you see fit to plan out your moves. The controls actually take quite some getting used to as multiple actions are assigned to certain buttons and context pays a strong part in which actions you’ll be performing. They do a great job though and I got used to them and can’t say I could ever blame them for my errors.

You control whichever character you have selected directly with the left stick, there’s no mouse pointer here, you can crouch, interact with the environment, attack enemies and use items with the face buttons. Left on the d-pad allows you to highlight specific enemies and see, one at time, where their vision cone covers. That’s right, it’s one of those games, fighting anyone head on will not end well for you. The cones are actually very large so planning ahead is vital though the game gives you all the tools you need to succeed.

Cones have two states, closer to the enemy they’ll be solid which means if you enter that area then you will quickly be spotted. Further away the cone becomes faded and here you won’t be spotted if you’re crouched. Finding the safe path, or creating your own, is the key to success. Each character has their own tools and abilities, each being useful in different situations. 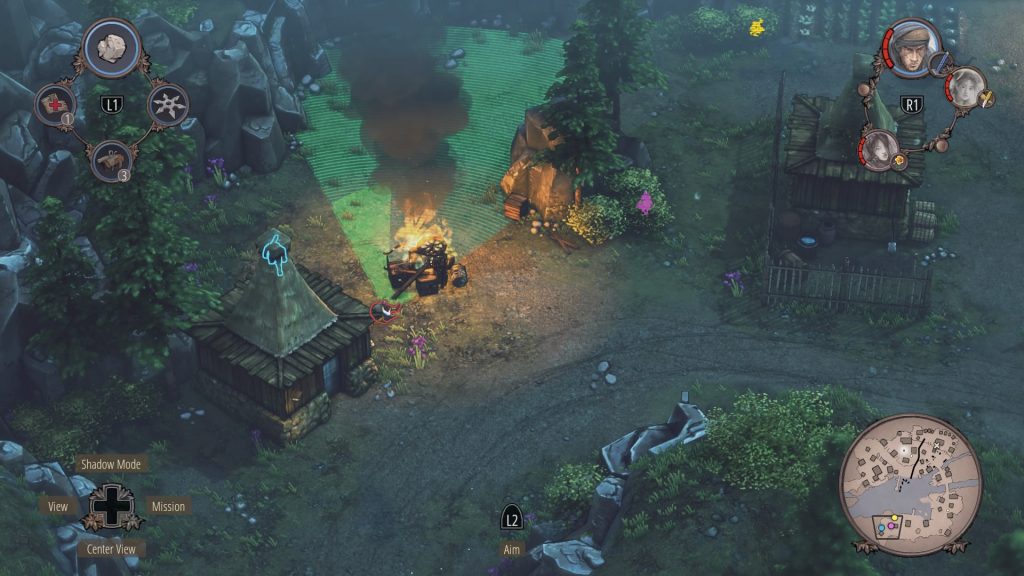 Hayato is a ninja so can dispatch enemies quickly, use a shuriken for ranged kills and distract enemies with stones. Yuki is a thief so is a little slower to get the kill, but has a bird whistle which draws enemies towards it and a floor trap for them to step on. Mugen is a samurai and so the strongest character at your disposal, he can kill multiple enemies at once with his sword wind attack and draw enemies away from their patrols with a bottle of sake. Aiko is also a ninja but one who can wear disguises to hide in plain sight and distract enemies or use sneezing powder to shorten an enemies viewing cone briefly. Takuma is an elderly gentleman so can’t take people out directly but is a master marksman who can take out enemies from a distance with his rifle. He also has a tanuki with which to distract enemies and bombs to loudly take out groups.

You have lots of options with which to complete your objectives depending on which characters are available for that mission. Whether you want to go lethal or non-lethal or simply sneak past without touching anyone there are multiple ways to approach each encounter. All characters can hide in bushes and use ladders to reach higher areas, whilst the ninjas can use a grappling hook on specific points and swim undetected if there is a body of water. Takuma can’t carry bodies, the females are physically weaker so drag bodies to safety whereas Hayato can carry one body relatively quickly whilst Mugen can carry two bodies whilst running!

You might think with such well defined abilities that once you’d mastered them that each level would basically play out the same but that’s where the level and enemy design comes in. The basic soldier can be manipulated easily with noises or disguises, ‘straw hats’ stick to their patrol religiously so are harder to isolate whilst samurai can’t be fooled by any tricks and need to be offed by Mugen or stunned with gunfire before being killed by the weaker characters. The combination of these enemies with overlapping line of sight and moving patrols, on top of level specific hazards like leaving footprints in snow or torches illuminating you if you get too close keep the challenge high and the gameplay rewarding. 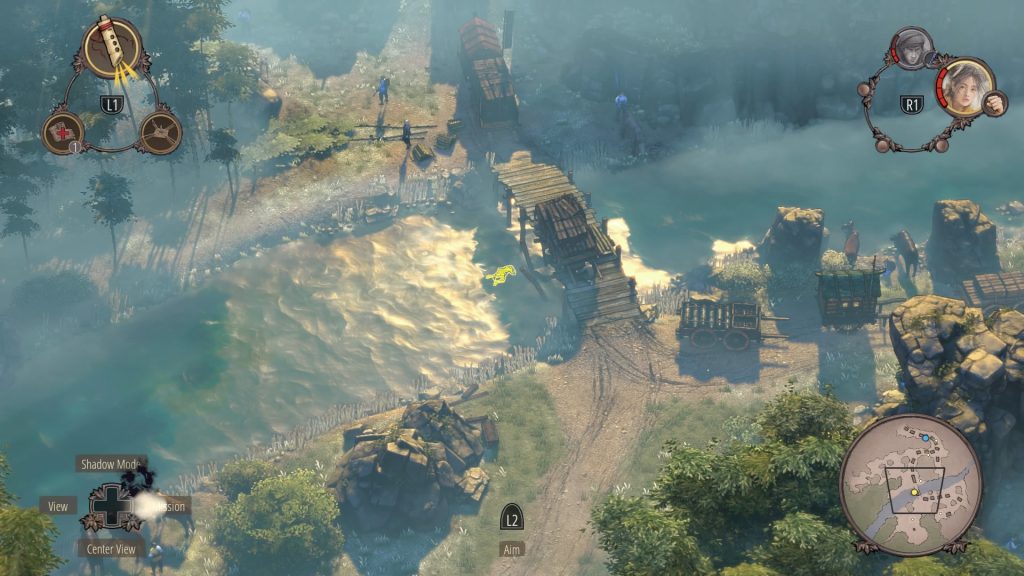 Shadow Tactics is a very difficult game. Only being able to see one enemy sight line at a time means you need to be able to visualise where is safe and often you’ll step out of the shadows only to be spotted instantly by someone you didn’t consider. Luckily the game’s best feature has you pressing the touchpad to create a quick save, so any mistakes can be erased in a matter of seconds. Three quick saves are kept in case you play yourself into a corner and you have normal saves through the pause menu if you want to create something more permanent. The game is designed to be played this way too as by default a reminder pops up at the top of the screen to tell you how long it’s been since you quick saved. Yes, that means the game can boil down to trial and error but if you’re good enough you won’t need it and it’s a nice safety net to have as levels, at least first time through, can take over an hour easily.

With thirteen levels that’s a decent amount of content, but for those who want a challenge there are also badges to go for. Each level has a speed run challenge and a hardcore difficulty challenge, but there are also level specific ones like not saving, not touching bushes, not touching water or not killing anyone to name a few. These are very difficult but for those who feel they’ve mastered the game but want more it adds some welcome replay value.

So it’s a well structured game with likeable characters and rewarding level design but it’s probably not much to look at right? Again, the visual and audio design can’t be faulted. Each level looks great and unique, capturing the time period and performing well. The music isn’t too memorable but as you’re spending a lot of time in levels this is preferable to it irritating. Voice acting comes in English or Japanese allowing you to go for full authenticity if you choose. 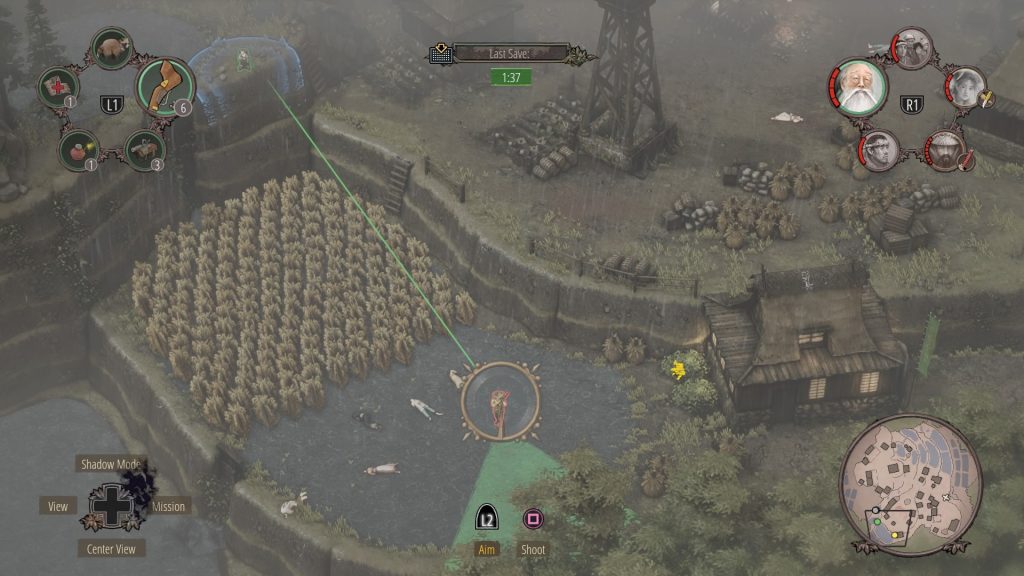 For a game that so obviously originated on the PC Shadow Tactics: Blades of the Shogun performs nigh on perfectly on the PS4. The controls take some getting used to but they do the job well and the rest of the game shines as it did on its original release. If you’re a fan of strategy games, stealth games or hopefully both then let this slower paced experience sneak up on you, you won’t regret it.

Shadow Tactics: Blades of the Shogun
9 Overall
Pros
+ Fantastic strategy-stealth gameplay
+ Each character is likeable and unique
+ Challenging and rewarding
+ Quick save ability is very welcome
Cons
- Levels can be very long
- Controls take some getting used to
- Trial and error gameplay may irk some
Summary
Shadow Tactics: Blades of the Shogun has made the leap from PC to PS4 and has not only survived the fall but killed a guard on the way down. The controls take a little getting used to but the characters, level design and strategy-stealth gameplay will reward you plenty for putting in the effort.