Jedi Academy is a straight forward port of the 2003 sequel to Jedi Outcast.  We reviewed that game’s port last year and gave it a respectable 7 out of 10 but were always bigger fans of Jedi Academy and so we were looking forward to this release, even if the almost twenty year old game mechanics and level design did occasionally make Outcast less fun than it should have been.

This game is set a few years after its prequel.  Instead of playing as Jedi-turned-bad-boy-turned-Jedi-again  Kyle Katarn, this time you play as a fairly bland apprentice called Jaden Korr.  The game opens with him (or her if you choose) heading to the academy to train as a Jedi along with a few other padawans, including Rosh Penin. 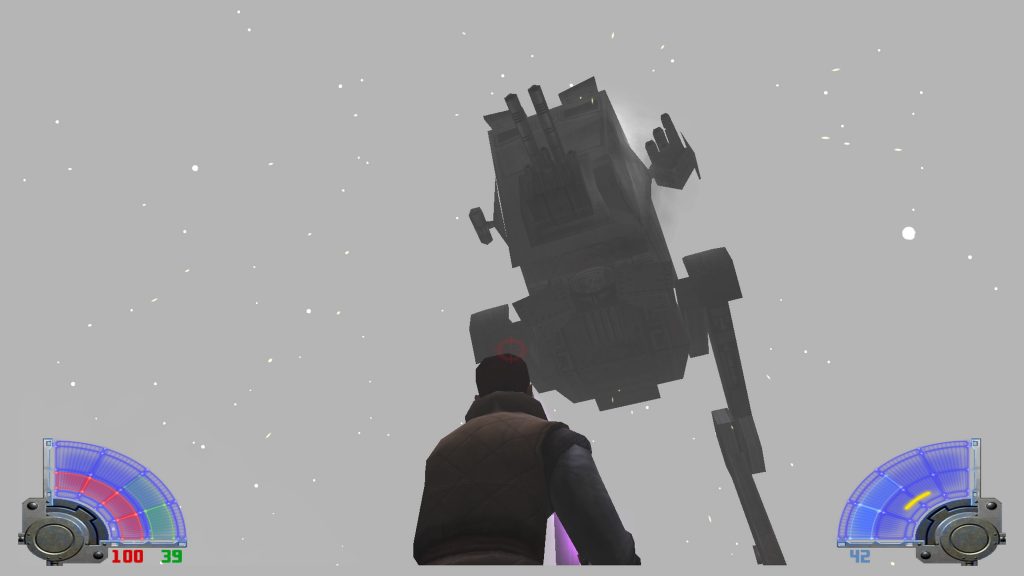 As the pair go through their training, it becomes apparent that Rosh is something of a dickhead but luckily Jaden has all the talent and so you get to do all the good missions which generally involve rescuing people or blowing stuff up.  However, along the way your master, Kyle, and Luke Skywalker become aware of a threat to the Jedi known as the Disciples of Ragnos who are going to locations known to contain dark Force energy and siphoning it.

Jaden begins the game with a homemade lightsaber.  Aside from being a plot device, this also serves an important purpose.  Remember those five hours at the start of Jedi Outcast where you just had guns and it was the dullest part of the game?  That’s all gone now.  You can start slicing folk up immediately in this game.  You can also pick your own Force power configuration.  The basics (push, pull, sense) are all mandatory but you can either pick ‘good’ powers like healing and mind tricks to baffle people or you can go darker and do the best move (Force Grip), lightning and others. 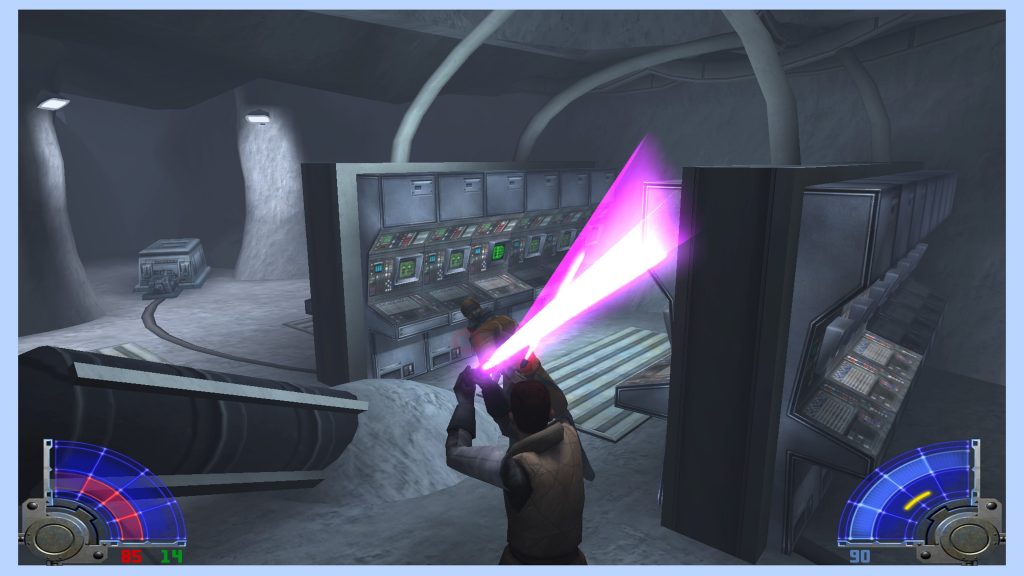 Having Force powers and a lightsaber from the start makes this game immediately better than its prequel.  But that’s not all.  The worst thing about Jedi Outcast was its level design which was so hostile to the player that it sometimes felt like a personal attack.  Well that’s been fixed too.  There’s no more looking for some random switch or a hidden grill up in the ceiling.  We didn’t have to look up a walkthrough once which is great because we used one for like 90% of the last game.

This means the action is a lot more immediate than before and you get to the good stuff right away.  Wading into a bunch of Stormtroopers and slicing them up is an absolute joy.  Even better is using Force Grip to lift them from a platform and drop them to their deaths.  The combat is still great, even if Fallen Order has rather moved the bar somewhat upward for Jedi combat.

You still have the choice of plenty of guns and blasters from the Star Wars universe but the fun is all in the lightsaber combat even if it can feel a little random at times. 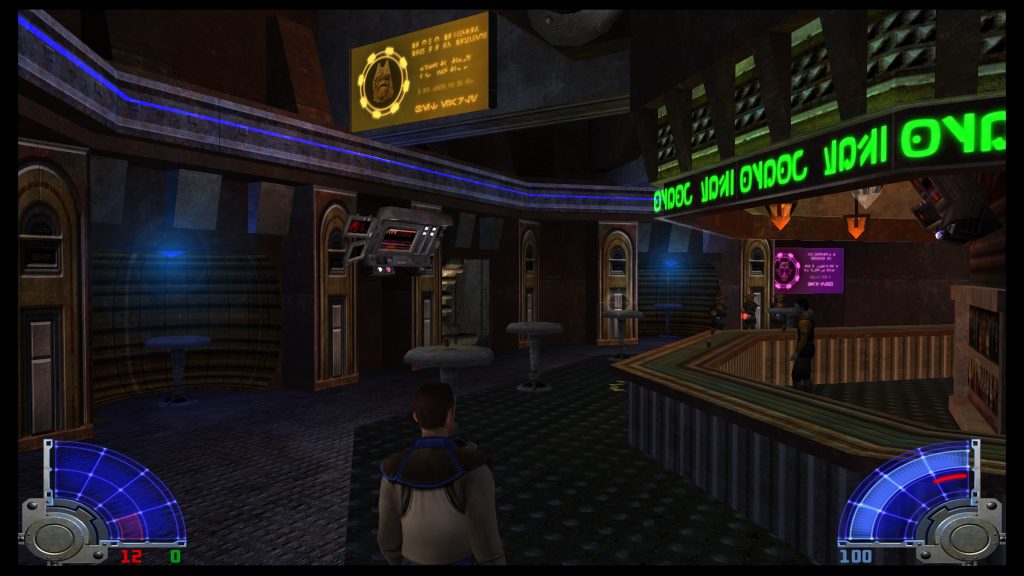 That said this is still a 17 year old game and that shows just as much as it did in the previous game.  The graphics and animation are showing their age severely but you do get lots of fan service in terms of familiar locations and assets to gawp at if you’re a fan of the films.  The game does throw in some cool set pieces too such as sections where you ride creatures or speeder bikes.  These aren’t always the best to control but we do appreciate a bit of variety.  That said,  we were very disappointed to see the bug that puts the game in windowed mode.  It shows what a basic port of the PC game this is and the same thing happened in Jedi Outcast.

The sound is top notch.   There’s plenty of authentic music and sound effects to set the mood.  The voice acting is just as stilted as the animation at times, making some of the story beats feel a little robotic but you can tell that the original developers had a lot of love for the source material because that really shows in the details this game includes. 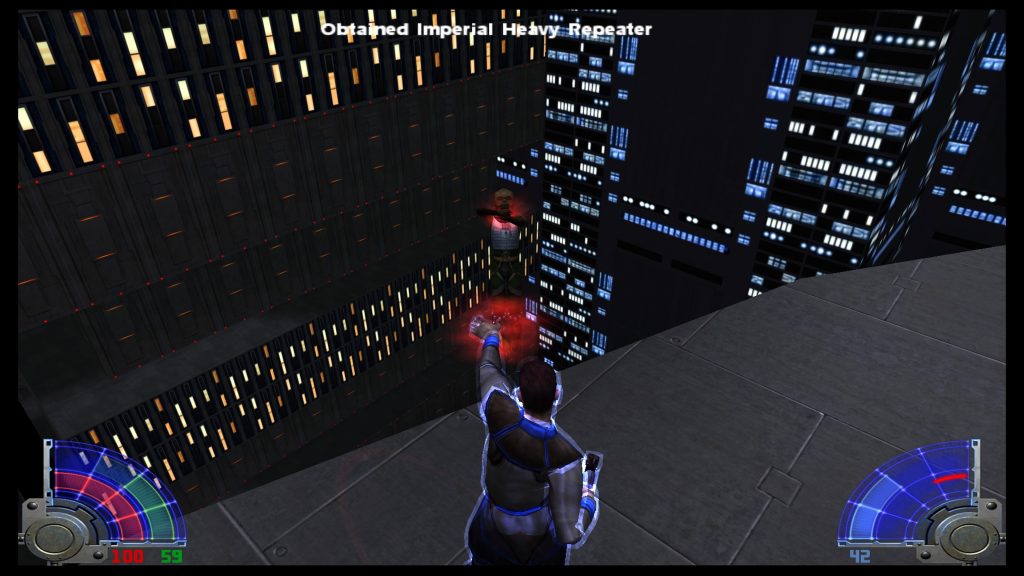 So, yes, while it looks and feels pretty dated compared to Fallen Order we appreciated the smaller scale and simpler levels.  And the fact that it didn’t have those awful puzzles in it.  Honestly, the spheres puzzle in Fallen Order was kind of bullshit.  The lack of a mini-map or a mission marker does mean that you can sometimes get a little lost or turned around in Jedi Academy but we found ourselves making good progress in every play session.

Mainly though, whether or not you’re a huge Star Wars fan (we’d describe ourselves as being pretty casual about the whole thing) this is a fun, focused hack and slasher with shooter elements and a bit of harmless platforming.  Also, unlike the previous port, this game includes the whole multiplayer element.  This was very popular back in 2003 and the servers are packed at the moment here so that’s good.  Personally we always found it a bit hard going and never really rated the multiplayer aspect but we did complete the campaign like three times back on the PC so we’re just happy that’s not been messed with.

Summary
Jedi Academy was always the best Star Wars game until Fallen Order came along but it still stands up today thanks to its brilliant combat and decent story.