The scrolling beat ’em-up genre isn’t dead, but it’s far from the fan favourite that it was back in the 16-bit era. I reviewed Mother Russia Bleeds a while back, but between then and now we’ve reviewed plenty of similar titles, even another with Raging in the title very recently. Raging Justice is more traditional than most with very few additions to the formula. Does keeping things so true to the original template work in its favour? 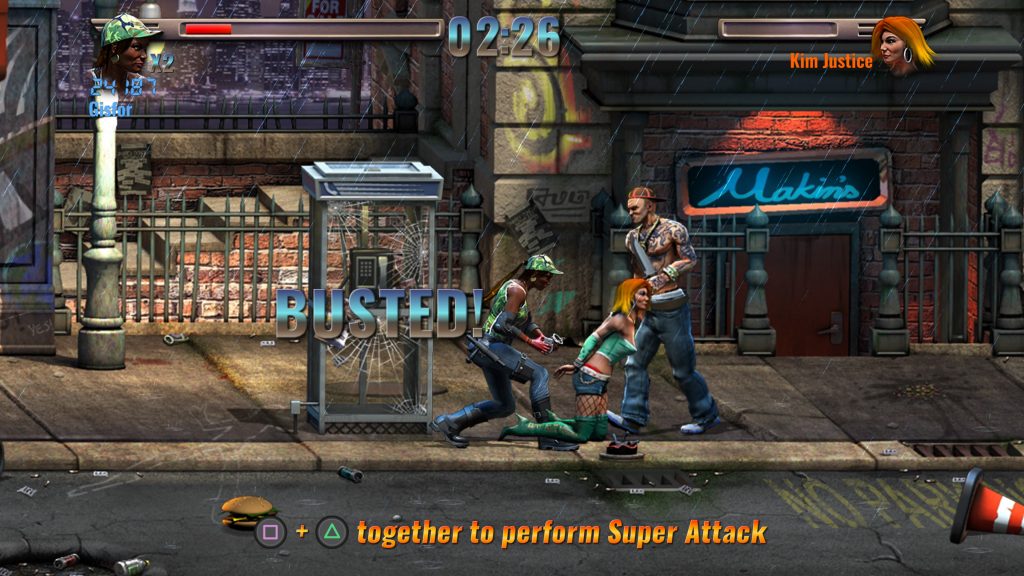 There is a very brief story sequence to start. The Mayor has been taken hostage and you play as one of three characters who venture in to save him. Rick Justice, a slow but powerful veteran cop, Nikki Rage, ex-military who’s faster on her feet, or Ashley King, a fifteen year old who likes martial arts films or something. Make your choice and then head out onto the streets to dish out some justice.

Although there are minor differences each character’s basic controls are the same. You have a punch, kick, grab and jump button. Pushing punch and kick together does a special that’ll get you out of a crowd but costs you life. Double tapping left or right does a dash that evades and also knocks enemies over and double tapping up or down quickly hops you up and down the screen. Generally the controls are fine but the double taps sometimes don’t register too well and there were times where I’d press punch and kick, one after the other, to do a combo and the game would register them being pressed together and activate my special, costing me health.

You’ll encounter a lot of low level punks on your way to the boss of the stage, though the enemy variety isn’t the best. You’ll be facing the same enemies from the beginning of the game to the end, with bosses from early levels being introduced as regular enemies pretty quickly (though lacking the boss’ invulnerability to throws). You’ll find plenty of short lived weapons to help you take down your foes, from baseball bats to knives and axes. So far so familiar. 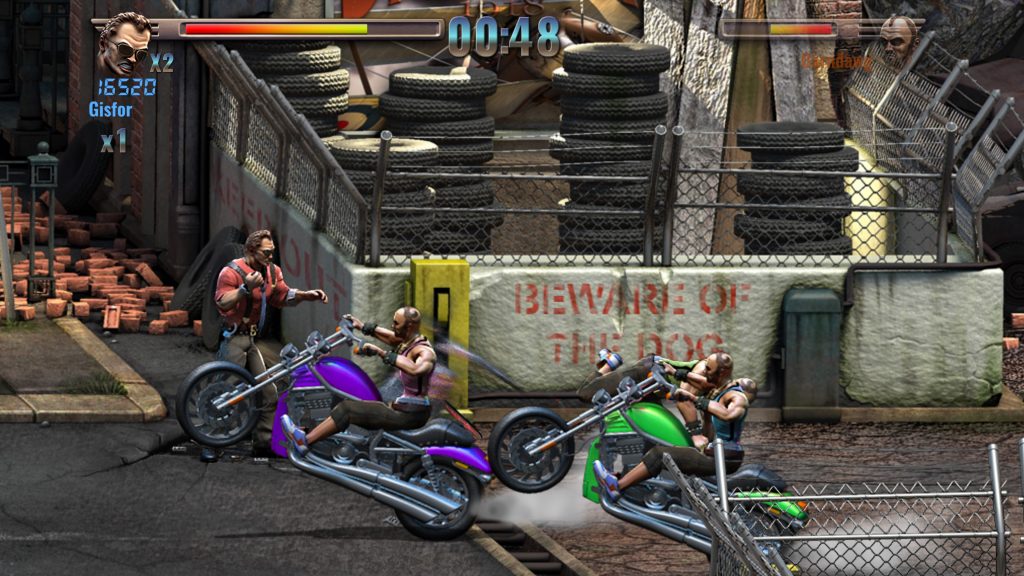 One wrinkle the game does add though is enemies with a warrant out for their arrest. These enemies are highlighted red and how you deal with them will give you different rewards. If you manage to stun an enemy then you can arrest them by grabbing them as stars spin over their head. Doing so will leave behind some food to replenish your health, arrest all warrants in a level and you’ll be rewarded with an extra life. You are a ‘good cop’. If you use a weapon to defeat them then you are a ‘bad cop’ and they will drop money as usual, but if you defeat all warrants this way then you’ll get a two shot shotgun. Helpful against those pesky bosses that care not for your combos.

It’s an interesting system that reminds me of Die Hard Arcade, although actually stunning opponents is hit and miss, especially when they, or you, are surrounded with bodies. As grab and pick up items are on the same button you can often end up doing something you didn’t intend or expect which rarely works out well, so grabbing the right enemy out of a crowd is a big ask.

The other slight variation to the gameplay are challenges. Each level has a list of objectives to complete which range from finishing the stage in a certain time, arresting a certain amount of people or scoring over a total number of points. These are more for completionists and those going for trophies but it’s nice to have them and, combined with the three difficulty levels, adds some replayability to the nine levels. 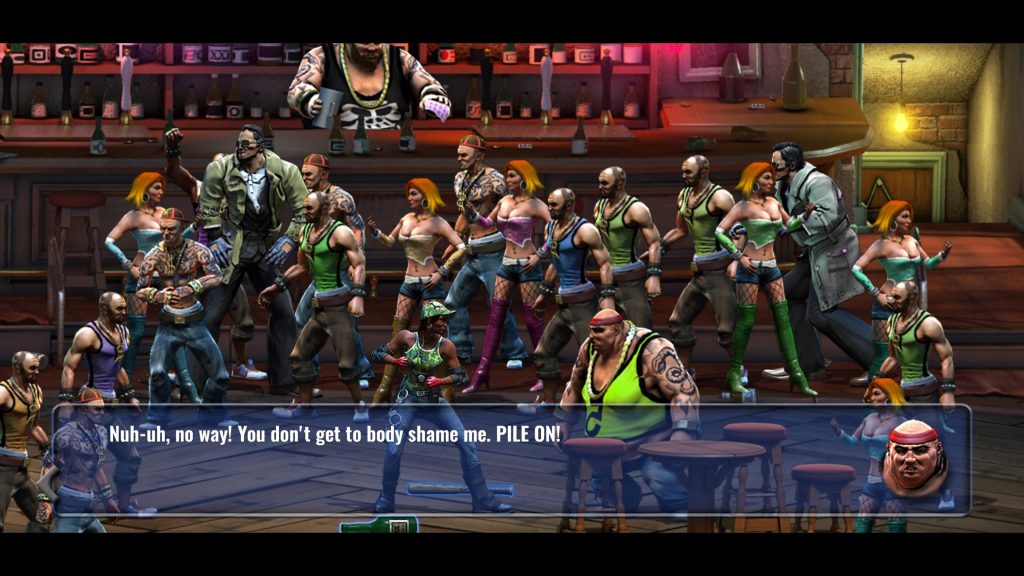 There is a separate Brawl mode where you must survive waves of enemies to post a score to the leaderboards (which seem to take a little too long to update with your score) but that’s it. You can play any mode in two player, but only locally, which does help to stop you getting too overwhelmed and does help with the difficulty. Even on Normal things are tough. You start with seven credits and three lives but don’t be surprised if you’re continuing on level one first time through. There is a level select once you’ve reached a level but it remembers what your best life situation was and allows you to continue from there. I don’t know if it’s clever or harsh, as if you reach the last level with only 50% health left with no continues or lives then you’re in trouble and the best bet is to go back a few levels when you were in better shape and play through them again, hoping to do better.

The only other thing worth mentioning is the presentation. Some people like it, some don’t. I’m in the latter camp. Everything just looks a little cheap and nasty, with font work being very basic. The character models are CG sprites, similar to what you might find in Donkey Kong Country or Killer Instinct, with few frames of animation. It’s a design choice, and I don’t necessarily mind the lack of frames, but the animations themselves aren’t particularly impactful and the models are rather ugly, much like you’d see in those Xbox Indie games that one person would churn out over and over. I get that they’re trying to evoke a time gone by but those games weren’t ugly, they were well designed within the limits of the hardware. Raging Justice doesn’t remind me of past game aesthetics, I think it just looks bad.

The classics were also praised for their soundtracks and again this game struggles to come anywhere close. Sound effects are okay, with voice samples being purposefully low quality, but the music is very forgettable and struggles to support the on screen action. 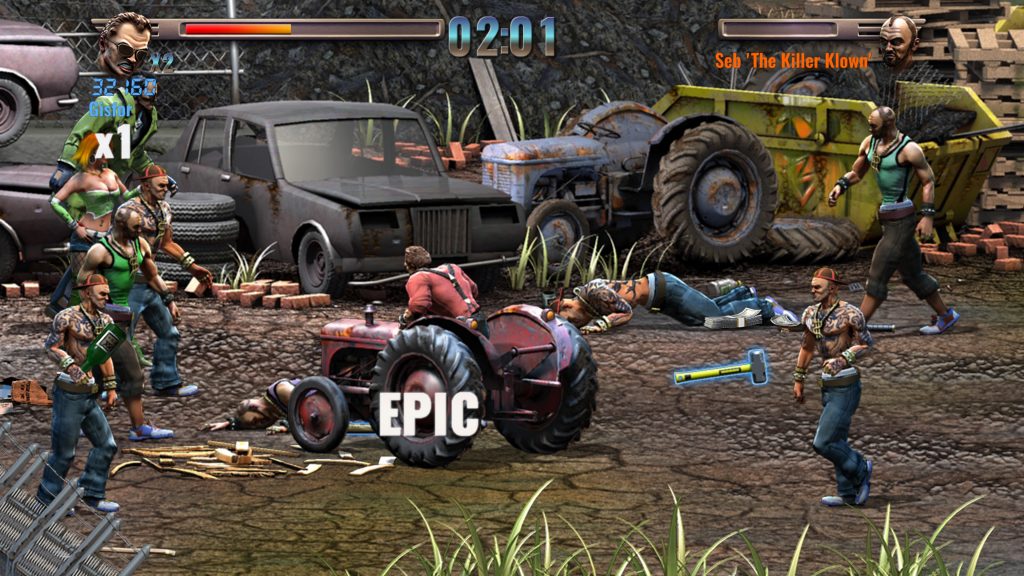 Raging Justice offers a decent amount of game with replayability for quite a reasonable price. I don’t enjoy the presentation which does affect the overall experience but it’s not so different from the old games. If that’s what you’re looking for then you’ll get some joy out of it, especially if you’ve got someone to play with. If you’re hoping for an evolution of the formula then you may struggle to fight your way to the end.

Raging Justice
6 Overall
Pros
+ Warrants are an interesting idea
+ Challenges add replayability
+ Doesn't stray too far from the classic formula
Cons
- Presentation is poor
- Difficulty can be harsh
- Controls aren't always as responsive as you'd like
Summary
Raging Justice sticks closely to the formula created years ago, for better or worse. The additions of warrants is an interesting one, with challenges giving a reason to replay levels. The difficulty is set a little too high and the presentation leaves a lot to be desired but fans of the genre will probably get some enjoyment out of it.