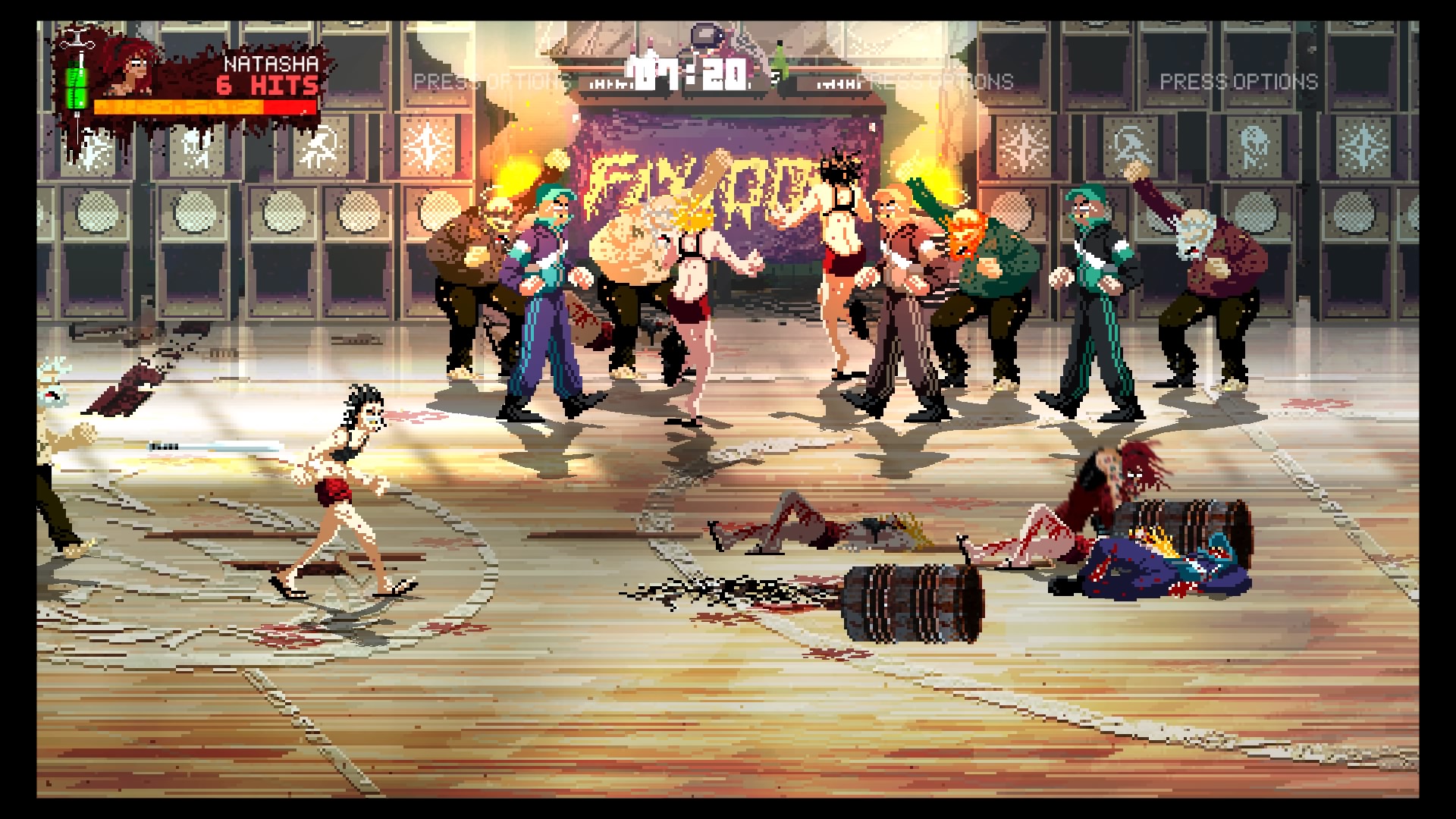 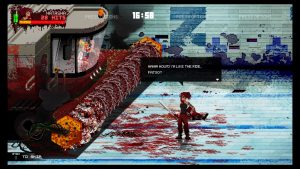 Mother Russia Bleeds is a new ultra violent beat ’em up-style game from Le Cartel Studio. If you imagine Streets of Rage mixed with Hotline Miami then you’ll get a pretty good idea of what this game is like.

You play the part of one of four traveler street fighters who are kidnapped and experimented on. This both sets up the revenge part of the story and the unique gameplay element that is Nekro, the drug that they used on you whilst you were unconscious. Nekro can be used to both heal your wounds and give you extra strength by putting you into berserk mode. You can carry three doses of Nekro but as a lot of the enemies use it as well once defeated you can extract some from their bodies. How do you know if Nekro can be extracted or not? The bodies convulse.

Mother Russia Bleeds is a very violent game, almost unpleasantly so. The visuals may be pixelated sprites but every hit has weight, blood flies constantly, enemies show signs of wear and that’s before you take into account the finishers you can do in berserk mode or certain set pieces. Sometimes it can try to show too much detail in too few pixels so you struggle to tell what is happening but generally the game’s style is attractive, in a grimy sort of way, and the variety of environments are interesting and have plenty of character. 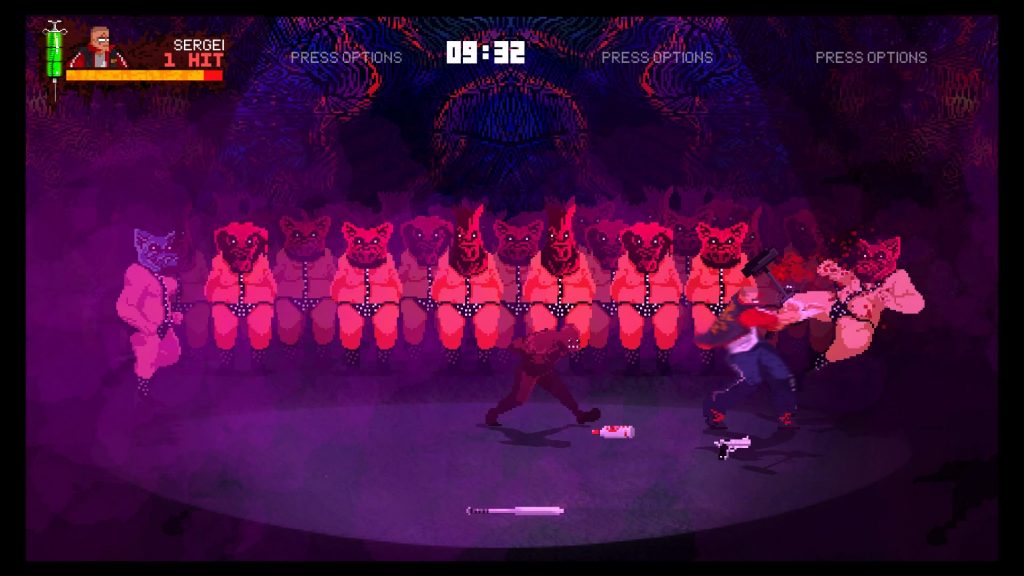 You choose from one of the four characters which range from the fast but weak woman to the strong but slow man and a couple to fill the gaps in between. There is four player local co-op if you have three friends around but no online unfortunately. If you don’t have friends then you can use AI to control the other characters but the screen can become incredibly busy and the AI aren’t that great at the game. You can play completely solo if you wish.

Each character has the same basic move set which is a little more complicated than the beat ’em ups of old. You have a basic punch combo, a kick to finish a combo, send enemies away or a launcher. You can grab which can turn into a throw in any direction or you can just beat them as you hold them. Downed enemies can be mounted and punched plus from a dash you can tackle, slide tackle or punch. There is also a quick dash move to get yourself out of trouble.

Of course there are a range of weapons to pick up and use as well. Bottles which break and then can be used to stab someone, one hit kill knives, bar stools, chairs, bats, crowbars and later on a range of firearms and grenades at set moments. Each break/run out of ammo after a while but are very effective at evening the odds for a short time. 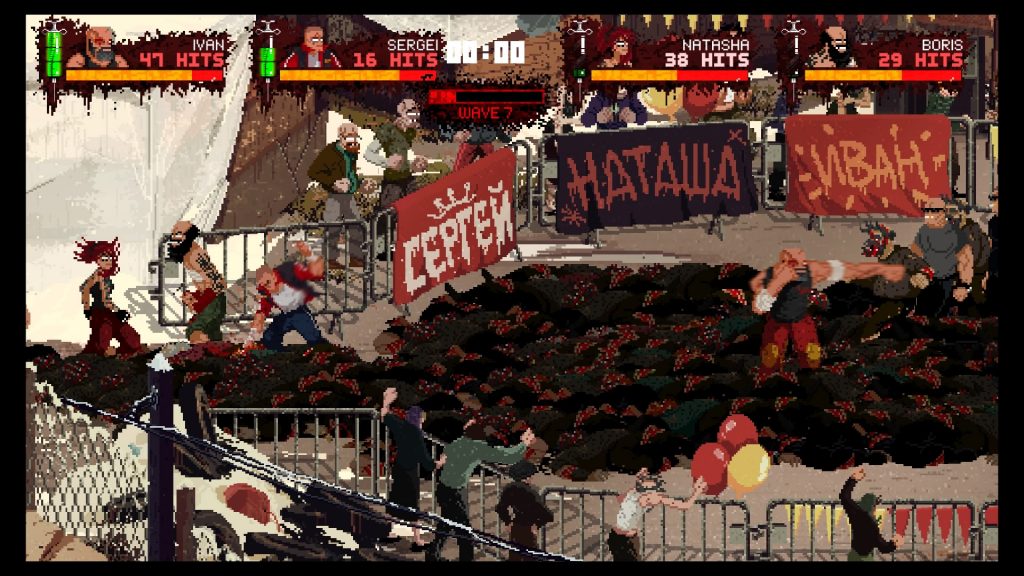 Your quest to find the source of the drugs and your original kidnappers takes you from the lab itself, through the sewers, on a train, to a fetish night club and beyond. There are eight levels all together, each taking between ten and thirty minutes to complete depending on how much trouble you have. If you die then you go back to a previous checkpoint rather than respawning where you fell so this can lengthen the game somewhat if you’re finding a section difficult. Altogether it’ll probably last you at least around two hours.

That might sound short but this type of game is intrinsically repetitive. After completing the first four levels I was getting a little bored but thankfully the latter half picks things up a bit with a nice variety of locations and set pieces plus more enemy variety. The majority of the bosses are interesting with most having a gimmick beyond just hitting them for ages. The final boss is a little less fun as it requires learning patterns, which isn’t a problem but it does have four separate phases that you have to start from the beginning of if you die at any stage.

Upon completing levels you unlock stages for the Arena which is a wave based survival mode. Reaching wave ten in each stage unlocks a new form of Nekro which each have different effects although I found doing that solo or with AI was a tough ask. There are also leaderboards for both the arena and the story if you wish to compare and compete. 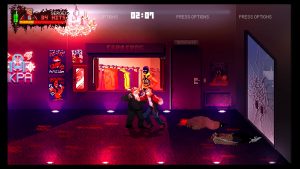 Mother Russia Bleeds is a success. The visual style paired with the great, oppressive music creates an atmosphere very different to the classic beat ’em ups of old but the above average move list, Nekro mechanic and variety in enemies and locations mean it’s a welcome return for the genre. It suffers the same problem as those old games in that it can get repetitive and it is short compared to most modern games but for the price you can’t go far wrong. If you found Hotline Miami to be vulgar then you might want to steer clear however.

Mother Russia Bleeds
8 Overall
Pros
+ Lots of variety in enemies and locations + Bosses are more involved than you'd expect + Great presentation
Cons
- Repetitive as these games tend to be - Screen can get too busy with four players - Violence and gore may upset some - Offline co-op only
Summary
Mother Russia Bleeds does a great job of bringing the beat ’em up genre to modern consoles. It suffers from the old fashioned problem of repetition as these games always do but, if you can stomach the violence, it gets a lot right in terms of enemy and location variety.